The evaluation of the wave-induced seabed response around a buried pipeline has been widely studied. However, the analysis of seabed response around marine structures under the wave and current loadings are still limited. In this paper, an integrated numerical model is proposed to examine the wave and current-induced pore pressure generation, for instance, oscillatory and residual pore pressure, around a buried pipeline. The present wave–current model is based on the Reynolds-Averaged Navier–Stokes (RANS) equation with - turbulence while Biot’s equation is adopted to govern the seabed model. Based on this numerical model, it is found that wave characteristics (i.e., wave period), current velocity and seabed characteristics such as soil permeability, relative density, and shear modulus have a significant effect on the generation of pore pressure around the buried pipeline. View Full-Text
Keywords: wave–current–seabed interaction; current velocity; Reynolds-Averaged Navier-Stokesequations; buried pipeline; k-ε turbulence model wave–current–seabed interaction; current velocity; Reynolds-Averaged Navier-Stokesequations; buried pipeline; k-ε turbulence model
►▼ Show Figures 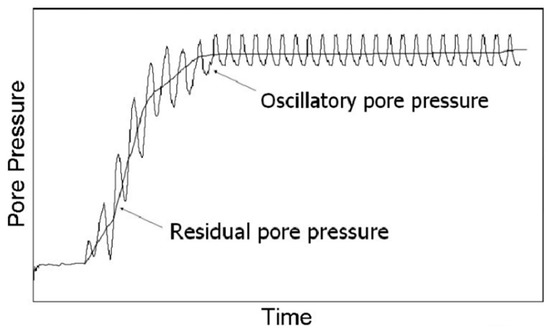