This study investigated what kind of diversities of cropping patterns observed in home gardens distributed on the eastern slopes of the Uluguru Mountains in central Tanzania, and how the diversity come into occurred. The major focus included the differences in ecological environment due to elevation, the impacts of the Ujamaa policy, and the characteristics of household members. Participatory observation with a one year stay in the study village was conducted to collect comprehensive information and to detect specific factors about formation of diversity cropping patterns of homegardens. The features of cropping patterns of the homegardens were assessed in an area distributed at altitudes of 650–1200 m. Many of the tree crops in this village originated from outside regions around the period of Tanzanian independence, and their cultivation spread throughout the village after the implementation of the Ujamaa policy. At present, village districts with many distributed homegardens with numerous tree crops are those that were confiscated from clans by the village government at the time of the Ujamaa policy and then redistributed to individuals. Cultivation of trees crops was very few at altitude of 900 m or more, because of cultivation characteristics of tree crops in this village were suitable for low altitude. In addition, since homegardens are considered to be abandoned for one generation only, their cropping patterns tended to easily reflect the ages and preferences of the members of the households living on them. The cropping patterns of the homegardens differed remarkably even between neighboring households owing to the cumulative effects of these multiple factors. Analysis using an inductive method—considering the background against which the phenomenon becomes evident after collecting the information from the target area in this manner—is thought to lead to an essential understanding. View Full-Text
Keywords: cropping patterns; ecology; homegardens; mountain agriculture; Tanzania cropping patterns; ecology; homegardens; mountain agriculture; Tanzania
►▼ Show Figures 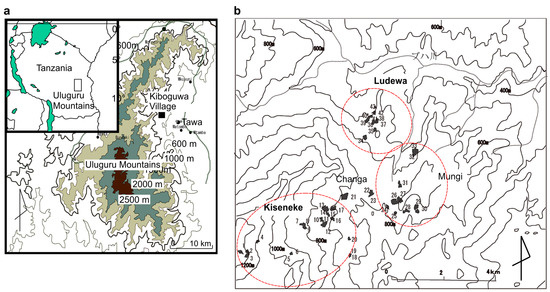 
Yamane, Yuko; Kularatne, Jagath; Ito, Kasumi. 2018. "Diversity of Cropping Patterns and Factors Affecting Homegarden Cultivation in Kiboguwa on the Eastern Slopes of the Uluguru Mountains in Tanzania" Agriculture 8, no. 9: 141. https://doi.org/10.3390/agriculture8090141