Four experiments (A, B, C and D) were conducted during March and April of 2015 and 2016 on a five-year-old commercial sweet orange “Valencia” (Citrus sinensis (L.) Osbeck) trees located at Felda, Florida (26.61° N, 81.48° W) on Felda fine sand soil (Loamy, siliceous, superactive, hyperthermic Arenic Endoaqualfs, 0–2% slope). Experiment A contained 36 trees (18 hand + 18 mechanical), experiment B contained 49 trees (26 hand + 23 mechanical), experiment C contained 50 trees (25 hand + 25 mechanical), and experiment D contained 50 trees (25 hand + 25 mechanical). Every experiment located within 500 m from each other, and all experiments were similar in soil type, tree age and tree spacing (3.66 × 8.84 m). Prior to the experiment, trees were visually inspected to confirm the existence of HLB symptoms. Also, all trees were irrigated equally and harvested manually. Two harvesting methods (treatments) were used including hand and tree customized canopy shaker built (prototype designed for trees that were 2.5 to 2.7 m tall) in the experimental station at the University of Florida (Figure 1) for evaluation of their effect on tree water relations and tree yields.

Stem water potential (Ψstem) was determined during March and April 2016 before harvest and one day after harvest (Table 1). Stem water potential was measured on fully matured leaves from the outer canopy (sun-exposed leaves) at mid-day between 12:00 and 14:00. Briefly, Ψstem was measured using four leaves per tree (four trees per treatment) during sap flow measurements. Prior to measurements, leaves were wrapped in plastic, then aluminum foil the day before measurements, to allow the water potential to equilibrate [16]. Selected leaves were cut with a razor blade and Ψstem was measured using a Portable Plant Water Status Console, or pressure chamber (Soilmoisture Equipment Corp. Model 3000, Santa Barbara, CA, USA). The pressure chamber was pressurized until the exudation of water, and the pressure was recorded as -MPa. Ψstem data were subjected to ANOVA split-plot analysis.

Two harvesting methods (hand and canopy shaker) were performed each of four times for all experiments (two per year, total four experiments). Harvested fruit was weighed for each tree, then averaged for each experiment. In the mechanical treatment, prototype designed for trees that were 2.5 to 2.7 m tall, the harvester dropped fruit on the ground, therefore, fruit for both hand and machine harvested trees were picked up from under the trees and weighed then placed into designated tubs. Harvested fruit was subject to analysis of variance (ANOVA) split-plot analysis without repeated measurements.

Each experiment was arranged as a split-plot design as repeated measurements where appropriate with two treatment methods (hand and machine), sap flow and Ψstem repeated twice (before and after harvest) in four experiments. Each experiment was analyzed separately, and each tree represents an experimental unit. Statistical variations among means were determined using the general linear model procedure (PROC GLM) [17]. Least significant difference test (LSD) was employed to separate the main effect means at α < 0.05. Due to the lack of interactions between each treatment (hand or mechanical method) and the time of sampling (before and after harvest), only treatment effect and time of sampling were reported.

Continued mechanical harvesting treatment introduced physiological stress and damage (Figure 4) on trees. Besides, significant variations in water relations were observed between hand and mechanical treatments. Differences were observed in sap flow and Ψstem within all sites. Sap flow decreased after harvesting while Ψstem increased indicating less water stress under hand-harvested trees. However, Ψstem did not significantly change under mechanically harvested trees before and after harvesting. That could be related to root declining and physical tree damage, which developed as drought stress factors. Such issues could be avoided by using the hand harvesting treatment. Removal of green fruit and damaging branches by mechanical harvesting adversely affect growth and production of young citrus trees within all sites. Consequently, our study concludes that hand harvesting treatment may be a better choice to reduce HLB-affected tree stress resulted from the mechanical shaker.

Presented research was funded by the IFAS Citrus Initiative program. 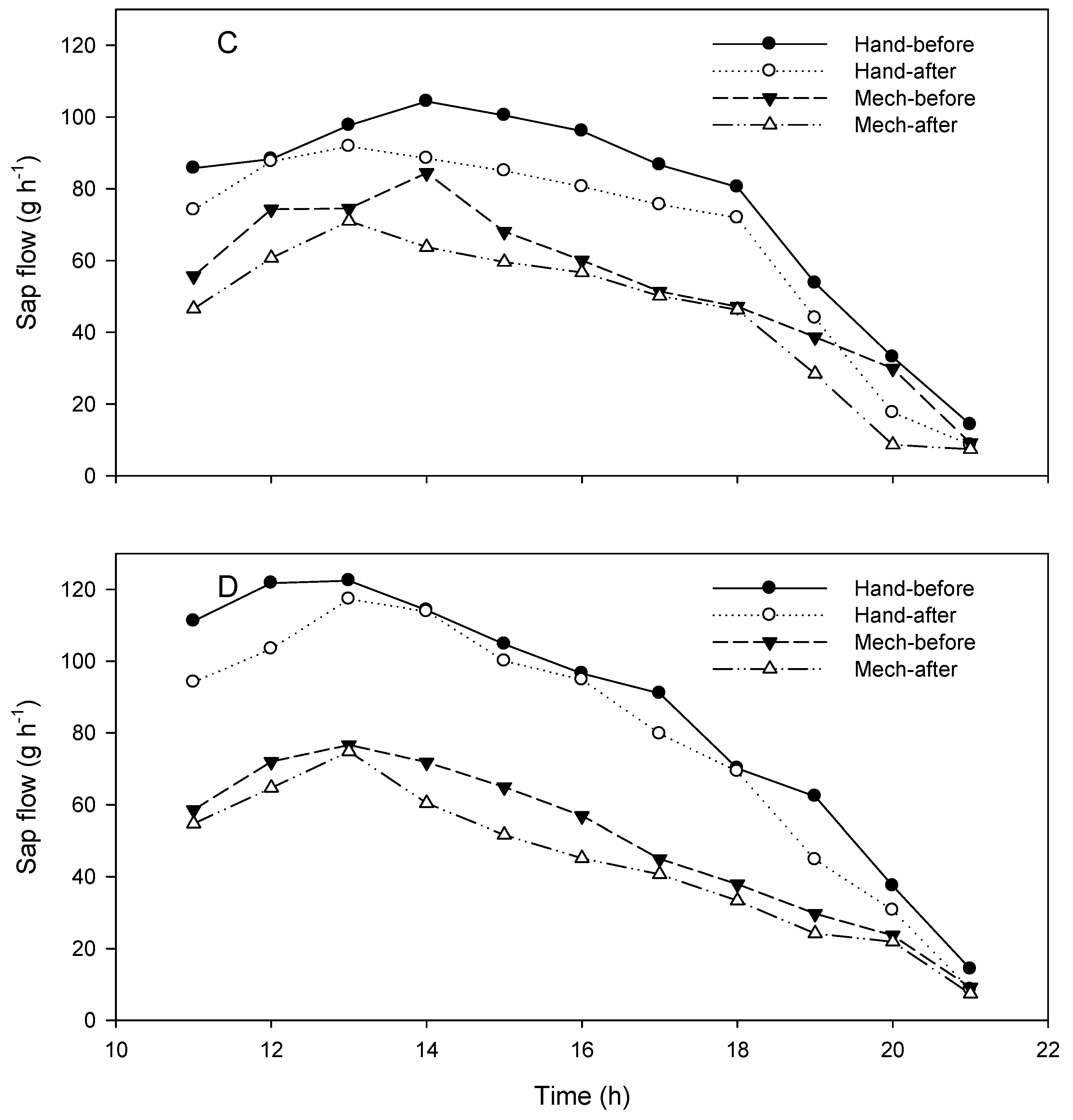