This study assessed the responses of four local Spanish cultivars of Phaseolus lunatus (lima bean) to moderate salinity. For three weeks, plants were exposed to increasing salinity (50–150 mM NaCl) under greenhouse conditions. At the end of the experiment, several growth and biochemical parameters were determined. Salt stress reduced the fresh weight of aerial organs, allowing us to rank the four genotypes according to their tolerance to salinity. The concentration of most photosynthetic pigments remained unaltered, except carotenoids that were reduced in the least salt-tolerant cv. (cultivar) VPH-79. Leaf Na+ and Cl− concentrations increased with increased salt concentration of irrigation water, but K+ either remained constant, as in the most tolerant ‘BGV-15410’, or increased in the other cultivars, resulting in an unchanged K+/Na+ ratio under stress in two of the selected cultivars. Moreover, proline increased in all cultivars, most notably in cv. VPH-79, with the highest absolute concentrations registered in the more salt tolerant cultivars. Interestingly, these cultivars already had a relatively higher proline concentration in non-stressed plants. These findings indicate that P. lunatus is moderately salt tolerant and that its main mechanisms to adjust to salinity stress are the maintenance of high concentrations of K+ and proline accumulation in leaves. View Full-Text
Keywords: lima bean; salt tolerance; growth parameters; ionic homeostasis; osmolytes; proline lima bean; salt tolerance; growth parameters; ionic homeostasis; osmolytes; proline
►▼ Show Figures 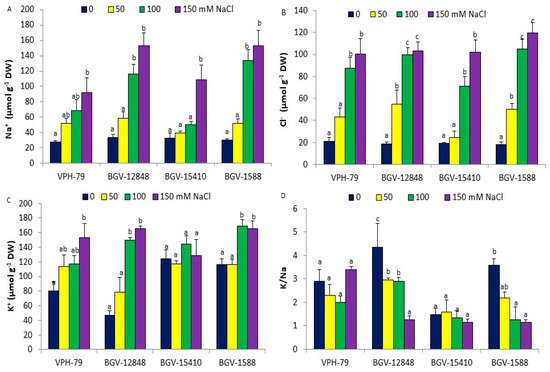