The Agricultural Ethics of Biofuels: The Food vs. Fuel Debate
Previous Article in Journal

Over two-thirds of human water withdrawals are estimated to be used for agricultural production, which is expected to increase as demand for renewable liquid fuels from agricultural crops intensifies. Despite the potential implications of bioenergy crop production on water resources, few data are available on water use of perennial bioenergy grass crops. Therefore, the objective of this study was to compare dry matter yield, water use, and water-use efficiency (WUE) of elephantgrass, energycane, and giant reed, grown under field conditions for two growing seasons in North Central Florida. Using scaled sap flow sensor data, water use ranged from about 850 to 1150 mm during the growing season, and was generally greater for giant reed and less for elephantgrass. Despite similar or greater water use by giant reed, dry biomass yields of 35 to 40 Mg ha−1 were significantly greater for energycane and elephantgrass, resulting in greater WUE. Overall, water use by the bioenergy crops was greater than the rainfall received during the study, indicating that irrigation will be needed in the region to achieve optimal yields. Species differ in water use and WUE and species selection can play an important role with regard to potential consequences for water resources. View Full-Text
Keywords: biomass crops; biofuels; sustainability; water use; transpiration; gas exchange; sap flow; elephantgrass; energycane; giant reed biomass crops; biofuels; sustainability; water use; transpiration; gas exchange; sap flow; elephantgrass; energycane; giant reed
►▼ Show Figures 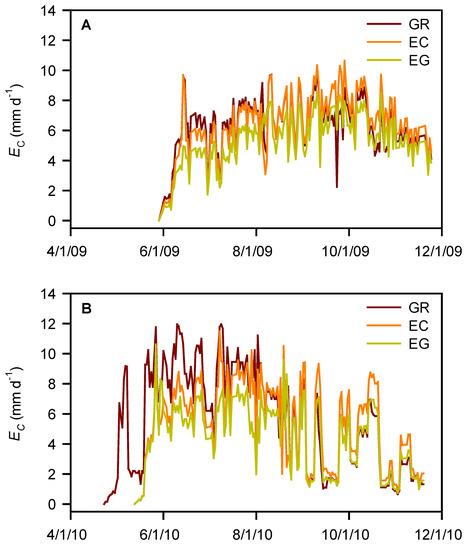