Responses of Yield and Protein Composition of Wheat to Climate Change

Global wheat demand is expected to continue to increase due to the projected increase in the World’s population but regrettably, wheat yield is expected to decrease due to the progressively changing climate. Although the effects of temperature, soil moisture and nutrient absorption on the yield of wheat have been studied extensively to address the threats posed by climate change on food security, the combined effects of these factors have been studied to a lesser extent. This study thus aims to investigate the interactive effects of different regimes of fertilizer and soil moisture on the yield and amino acid composition of wheat. Twelve treatments under different regimens of soil moisture and fertilizer, replicated ten times in a randomized block design were considered in the greenhouse and in the field. The study reveals that variation in each factor had a significant effect on wheat but soil moisture was the principal factor controlling yield and protein accumulation. Application of organic fertilizer to wheat increased amino acid accumulation when the average temperature was at 18 °C, with minimum temperature (Tmin) and maximum temperature (Tmax) of −6 °C and 42 °C respectively. However, application of inorganic fertilizer to wheat enhanced amino acid accumulation when the average daily temperature was at 8 °C, with Tmin and Tmax of −10 °C and 26 °C respectively. Our results also show that a decrease in soil moisture from 100% to 30% in the greenhouse improved the quantity of amino acid in the grain by 26.4% and 56.8% for organic and inorganic treatments respectively. Also, grain amino acid concentration increased by 16.6% and 4.76% when soil moisture dropped from 100% to 30% for the organic and inorganic treatments in the field respectively. View Full-Text
Keywords: wheat; nutrient; soil moisture content; temperature; yield; climate change wheat; nutrient; soil moisture content; temperature; yield; climate change
►▼ Show Figures 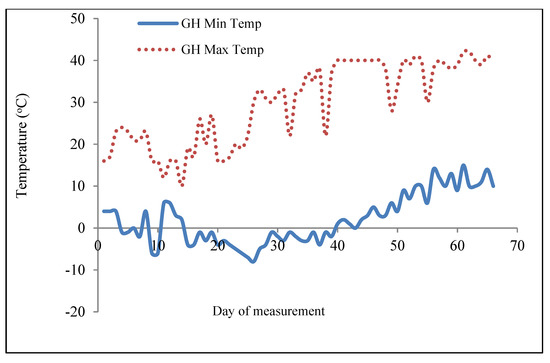