The risk of developing diabetic kidney disease (DKD) in patients with undiagnosed diabetes mellitus (UD) has never been evaluated. We studied the burden of UD on the risk of developing DKD in the Japanese population in a single-center retrospective cohort study. The patients with type 2 diabetes mellitus, but without DKD (estimated glomerular filtration rate (eGFR) < 60 mL/min/1.73 m2 or proteinuria), were recruited from January 2018 to January 2019; medical records were scrutinized retrospectively from January 2003 until May 2019. The individuals, with diabetes that could not be denied based on past and current records, comprised the undiagnosed diabetes (UD) group whereas those with confirmed diagnosis comprised the diagnosed diabetes (DD) group. The group differences were tested using a Kaplan–Meier curve and Cox proportional hazards model. Among the 408 participants, 164 (40.2%) and 244 (59.8%) comprised the DD and UD groups, respectively. The baseline parameters, including age, male gender, and BMI were comparable between the groups, but the plasma glucose, HbA1c levels, and diabetic retinopathy prevalence were higher in the UD group. The risk of developing DKD (log rank test, p < 0.001), an eGFR of < 60 mL/min/1.73 m2 (p = 0.001) and proteinuria (p = 0.007) were also higher in the UD group. The unadjusted and adjusted hazard ratios for DKD were 1.760 ((95% CI: 1.323–2.341), p < 0.001) and 1.566 ((95% CI: 1.159–2.115), p = 0.003), respectively, for the UD group. In conclusion, this is the first report showing that UD is a strong risk factor for DKD. The notion that a longer duration of untreated diabetes mellitus is involved strongly in the risk of developing DKD warrants the need for the identification and monitoring of UD patients. View Full-Text
Keywords: diabetic kidney disease; undiagnosed diabetes; proteinuria; glomerular filtration rate; type 2 diabetes diabetic kidney disease; undiagnosed diabetes; proteinuria; glomerular filtration rate; type 2 diabetes
►▼ Show Figures 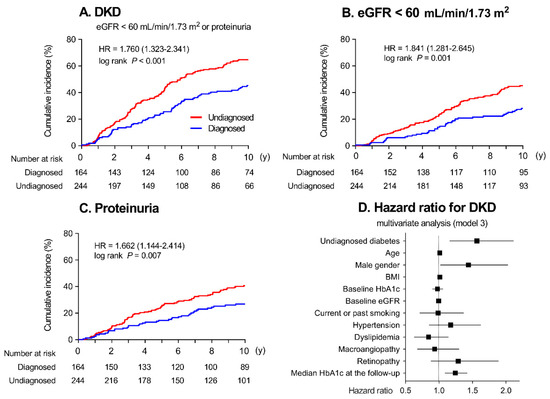