Prevalence of Depression in Coronary Artery Bypass Surgery: A Systematic Review and Meta-Analysis
Next Article in Special Issue

Assessment of the Psychological Situation in Adults with Congenital Heart Disease

The Development of the Ascending Aortic Wall in Tricuspid and Bicuspid Aortic Valve: A Process from Maturation to Degeneration

Background: Patients with a bicuspid aortic valve (BAV) have an increased risk for aortic dilation and dissection. In this study, we provide a histological stratification of the developing aorta in the tricuspid aortic valve (TAV) and the BAV populations as a reference for future studies on aortopathy and related syndromes. Methods: Non-dilated TAV and BAV ascending aortic wall samples were collected, including 60 TAV (embryonic–70 years) and 32 BAV specimens (fetal–72 years, categorized in eight age groups. Results: In TAV, intimal development starts in the neonatal phase. After birth, the thickness of the medial layer increases significantly by increase of elastic lamellae up to and including the “young child” phase stabilizing afterwards. The BAV shows already prenatal intimal thickening becoming significantly thinner after birth subsequently stabilizing. In BAV, increase in elastic lamellae is seen between the young child and the adolescent phases, stabilizing afterwards. Conclusions: Vascular development in TAV is described in three phases: maturation, stabilization, and degeneration. For BAV, the development can be described in two phases: maturation (already prenatally) and degeneration. After birth, the development of the aorta is characterized by degeneration, leading to weakening of the ascending aortic wall and increasing the risk of aortopathy. View Full-Text
Keywords: bicuspid aortic valve; tricuspid aortic valve; development; aortopathy; histopathology bicuspid aortic valve; tricuspid aortic valve; development; aortopathy; histopathology
►▼ Show Figures 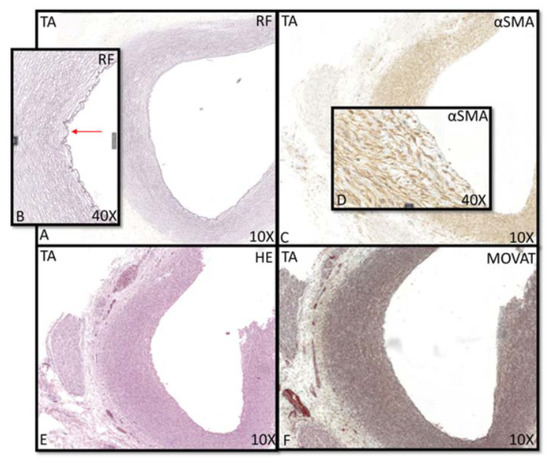