Sexual Dimorphism of NAFLD in Adults. Focus on Clinical Aspects and Implications for Practice and Translational Research
Previous Article in Journal

Nonalcoholic fatty liver disease (NAFLD) is the most common liver disorder in the United States, potentially leading to fibrosis, cirrhosis, and hepatocellular carcinoma progress [1,2,3,4]. NAFLD is manifested with a wide spectrum of clinical symptoms while disease pathogenesis is described through a “multiple-hit model.” The model takes into consideration multiple factors that may contribute to the disease progress and staging [5]. Indeed, NAFLD is closely associated with metabolic syndrome, inflammation, and mitochondrial dysfunction [4,6,7,8]. Although the mechanism of mitochondrial dysfunction in NAFLD is still not fully elucidated, multiple studies have demonstrated evidence of molecular, biochemical, and biophysical mitochondrial abnormalities in NAFLD. Mitochondria play a very significant role in hepatic cellular metabolism. Indeed, NAFLD-affected individuals exhibit morphological changes in liver mitochondria and a decrease in ATP production [9]. Decreased expression of mtDNA-encoded polypeptides and low activity of complexes I, III, and V were also found in nonalcoholic steatohepatitis (NASH) patients [10]. Studies in animal models demonstrate oxidative stress, decreased activity of OXPHOS proteins, high levels of circulating TNF-α, and accumulation of hepatic cardiolipin and ubiquinone [9,11]. Regardless of the mechanism involved, these data provide compelling evidence that mitochondrial dysfunction contributes to the NAFLD phenotype. In the setting of impaired mitochondrial function, Krebs cycle involvement in NAFLD pathogenesis is expected. The Krebs cycle is a central mitochondrial pathway that serves as a metabolic hub for aerobic respiration, glycolysis, lipogenesis, gluconeogenesis, and amino acid synthesis. For every turn of the cycle, there is a simultaneous reduction of NAD+ and ubiquinone. Subsequent oxidation of NADH and FADH2, followed by ADP phosphorylation, leads to ATP synthesis. Disruption of the Krebs cycle may lead to a wide range of metabolic disturbances and clinical symptoms. Given the association between NAFLD and mitochondrial dysfunction, the aim of this study is to analyze circulating levels of Krebs cycle intermediates in a cohort of NAFLD-affected individuals and matching healthy controls, and correlate our findings to the liver function clinical metrics.

NAFLD (n = 22) and matched control cohorts (n = 67) included both genders in the age range 23–67 years old. The diagnosis of NAFLD was made on clinical and ultrasound evidence and by excluding other causes of abnormal liver function tests. The sonographic findings have been validated in the past [12]. Blood samples were drawn presumably after an overnight fast, although later plasma glucose analysis revealed that not all subjects were compliant with the fasting protocol. Informed consent was obtained from all subjects and the procedures were conducted in compliance with the Institutional Review Board at Metro Health Medical Center. All plasma sample were analyzed for liver transaminases (alanine aminotransferase (ALT) and aspartate aminotransferase (AST), alkaline phosphatase (ALP), blood urea nitrogen (BUN), bilirubin, albumin, creatinine, glucose, HbA1C, triglycerides (TG), total cholesterol, high-density lipoprotein cholesterol (HDL-C), and inflammatory markers.

A total of 350 µL of plasma was spiked with 50 µL of a 0.2 mM mixture of tricarballylic acid, 13C4-malate (Millipore Sigma, Burlington, MA, USA), d6-succinate (Millipore Sigma), d6-α-ketoglutarate (Millipore Sigma), and 2 mM of 13C6-citrate (Millipore Sigma) followed by the addition of 25 μL of 13C-4-fumarate (Millipore Sigma) in ethanol (0.02 mM), then 1 mL of 1 N HCl in a saturated NaCl mixture and 1 mL of ethyl acetate were added. Tubes were vortexed, then rocked for ten more minutes. The slurry was centrifuged at 1000 rpm for 10 min, then the upper organic phase was carefully transferred to the clean reaction tube. Ethyl acetate extraction was repeated one more time, and organic extracts were combined into one tube. Samples were completely dried under a nitrogen stream at room temperature and incubated with 40 µL of metoxyamine in pyridine (20 mg/mL) at 80 °C for 1 h. Then tubes were cooled to the room temperature and 60 µL of bis-trimethylsilytrifluoroacetamide (BSTFA)/1% trimethylchlorosilane (Millipore Sigma) was added following incubation at 70 °C for 45 min. Samples were transferred to the gas chromatography mass spectrometer (GCMS) vials.

GC-MS analysis was performed with Agilent 5977. A mass spectrometer coupled to a 7890 B gas chromatograph fitted with a 7693 autosampler and a DB-5ms column (Agilent, Santa Clara, CA, USA). The GC-MS was operated as electron impact (EI)/single ion monitoring (SIM) mode. Target ions and retention times can be found in Supplemental Materials. The temperature program was as follows: 80 °C hold for 2 min, increase 15 °C/min up to 305 °C and hold for 3 min. Calibrations curves with at least six points were obtained by plotting the metabolite/internal standard peak ratio versus the metabolite concentrations in spiked plasma followed by linear regression analysis. The criteria for acceptance was set as a correlation coefficient r2 > 0.99. Carryover was examined by extracting spiked plasma samples with a high level of analytes followed by GC-MS runs of these samples and blanks. The coefficients of inter- and intraday variation and accuracy of the spiked samples were within acceptable limits (CV ≤ 20%).

Since no commercially available stable isotope-labeled standards for aconitate and isocitrate were found, tricarballylic acid (Supplemental material, Figure S2) was used as an internal standard for these metabolites.

Serum biochemistry was assessed including glucose, HbA1c, plasma creatinine, BUN, bilirubin, albumin, triglycerides, total cholesterol, HDL-C, ALT, and AST, TNF-α and leptin. Table 1 summarizes the mean standard blood clinical metrics obtained for NAFLD (n = 22) and matching controls (n = 67). Some of the study participants had non fasting glucose levels, so Table 2 summarizes clinical metrics for samples with plasma glucose ≤100 mg/dL. Non fasting glucose samples were excluded from Table 2 regardless of the HbA1c levels.
HbA1c—although the average value for the glycated hemoglobin (HbA1c) in the NAFLD group didn’t exceed the 6.5% cut-off, this value indicates prediabetic conditions. Overall, 32% (7 out of 22) of the NAFLD cohort had HbA1c ≥ 6.5%.
Albumin—decreased albumin levels are associated with cirrhosis, septal, intensive fibrosis, and steatohepatitis. Analysis of the entire cohort including samples with the non fasting glucose revealed that the average albumin level in affected individuals was decreased (3.8 ± 0.4 vs. 4.1 ± 0.2, respectively), p < 0.05 (Table 1). After the exclusion of samples with non fasting glucose levels, no difference was found in albumin values (Table 2).
Transaminases—alanine aminotransferase (ALT) activity, a marker of the hepatic damage, was significantly elevated (p < 0.05) regardless of the fasting status. The difference in aspartate aminotransferase (AST) activity between the normal and affected cohort became more evident in the group with glucose <100 mg/dL cut-off. The AST/ALT ratio, which is often used as an independent predictive factor for advanced hepatic fibrosis [13], was not significantly different between the two groups (Table 1). It is important to note that fifty percent of the NAFLD population can present with normal AST and ALT levels [14,15].
Bilirubin—although bilirubin levels were reported to be inversely associated with NAFLD [16], we didn’t observe a statistically significant difference in our cohorts.
Plasma creatinine, a common marker in cirrhosis and chronic kidney disease, also was not significantly different.
Increased triglycerides (TG) and decreased high-density lipoprotein cholesterol (HDL-C) are associated with metabolic syndrome [17]. It is interesting to note that the NAFLD cohort had elevated triglycerides but no difference in HDL-C level. Despite this, the triglycerides/high-density lipoprotein cholesterol ratio, reported in association with insulin resistance, was elevated in the NAFLD group.
Body mass index (BMI) is associated with fatty liver risk [18]. In this regard, we found a statistically significant BMI increase in the NAFLD cohort (Table 1), which became less apparent when only samples with glucose cut-off <100 mg/dL were included for the analysis (Table 2).
Hepatic steatosis index (HSI) was calculated using demographic and standard plasma metrics (Figure S4, Supplemental materials) [19]. In accordance to a study by Lee et al., HSI correlates significantly with fatty liver grade with a screening cut-off of >36.0 and likely reflects the presence of nonalcoholic steatohepatitis [19].
The Krebs cycle has a central role in liver metabolism, connecting hepatic fatty acid and glucose-related pathways. Abnormal cellular [20] and circulating [21] Krebs cycle intermediates are closely associated with mitochondrial dysfunction as was demonstrated in numerous studies [22,23,24,25]. Given the decreased activity in respiratory chain complexes in NAFLD [4], perturbations in cellular concentrations of Krebs cycle intermediates are expected.
Seven circulating Krebs cycle intermediates were analyzed including citrate, isocitrate, aconitate, α-ketoglutarate, succinate, fumarate, and malate. Oxaloacetate is not chemically stable and hence was omitted from the analyses. Succinyl-CoA is a cellular metabolite and consequently is not abundant in human plasma. Statistically significant increases were detected in circulating levels of citrate and isocitrate regardless of the plasma glucose levels (Figure 1).
Diagnostic performance of isocitrate and citrate in NAFLD patients was further analyzed by establishing the receiver operating curve (ROC) and analyzing the area under the curve (AUC) (Figure 2). The accuracy of both isocitrate and citrate to discriminate NAFLD from the control cohort showed similar areas under the curve (AUROC) of 0.74 and 0.75, respectively (Table 3).
Correlations between plasma Krebs cycle intermediates and standard clinical plasma metrics were explored by Pearson’s correlation coefficient. The most significant correlations were obtained in the NAFLD cohort for α-ketoglutarate to the BUN (r = −0.7969, p < 0.05). In the control group, plasma succinate was positively correlated with albumin (r = 0.353, p = 0.01), malate negatively correlated to AST (r = −0.332, p = 0.02), α-ketoglutarate was negatively correlated to glucose (r = −0.562, p < 0.001), aconitate was negatively correlated to bilirubin (r = −0.281, p = 0.04), and fumarate was negatively correlated to AST and ALT (r = −0.315, p = 0.02; r = −0.298, p = 0.03). When the entire population under the study was analyzed, the correlation analysis revealed that isocitrate was strongly correlated with age and bilirubin levels (r = 0.29, p = 0.005; r = −0.02, p = 0.04, respectively) and inflammatory markers (TNF-α and leptin), while citrate was correlated with age (r = 0.345, p < 0.001), AST activity (r = 0.249, p = 0.02), glucose levels (r = 0.284, p = 0.008), HSI, TNF-α, and leptin (Figure 3). Koliaki et al. [26] demonstrated that the metabolic flexibility of hepatic mitochondria in the early stages of NAFLD is lost at the NASH stage. We utilized calculated HSI values as a proxy of NAFLD staging and found a positive correlation to citrate levels (Figure 3).

We would like to thank Dharmvir Singh for organizing clinical data. 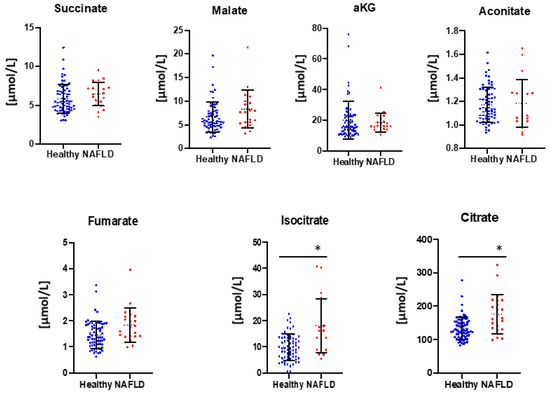 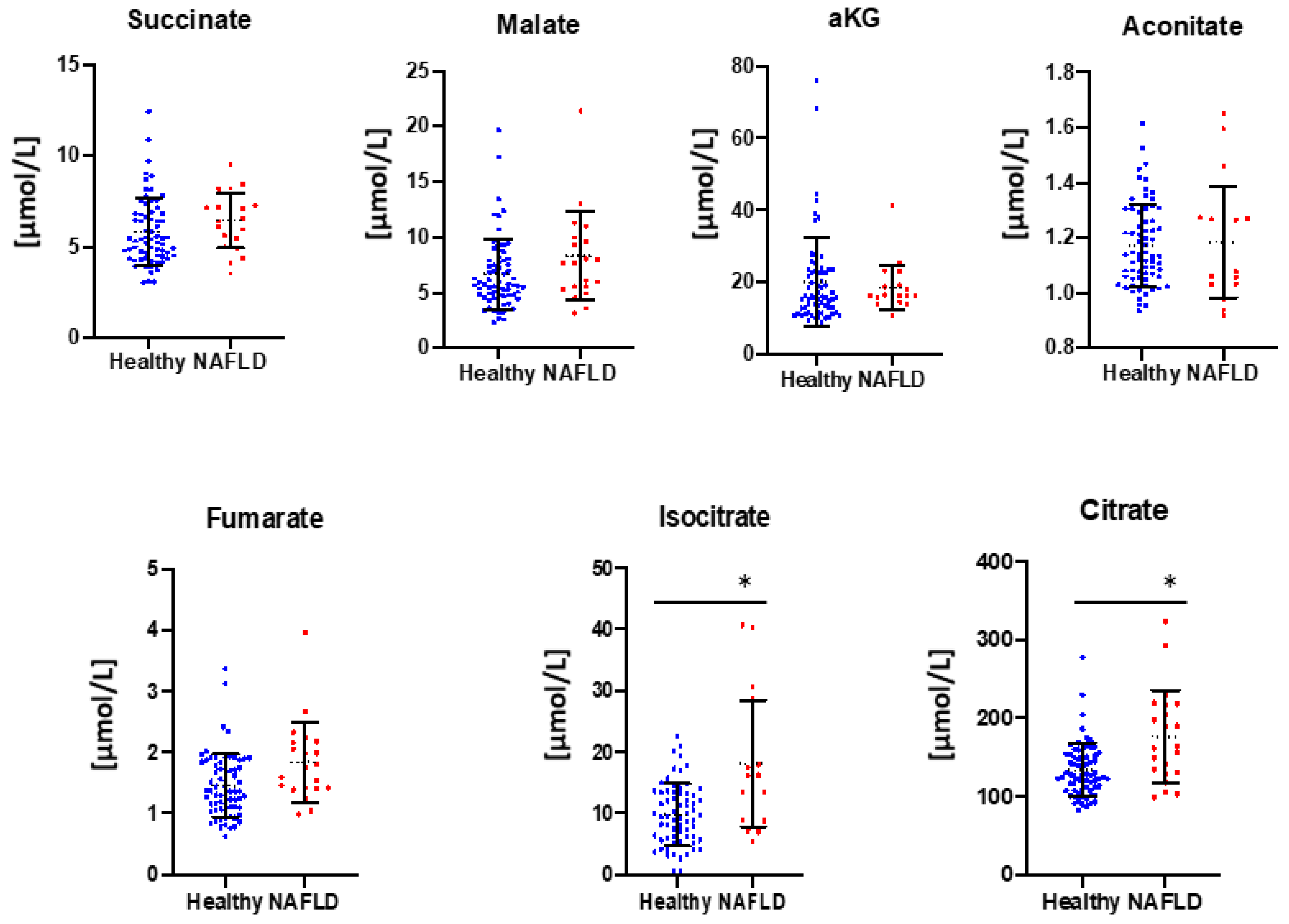 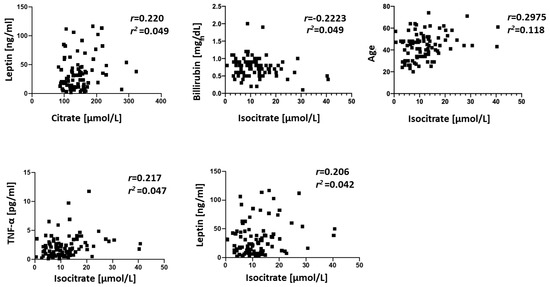 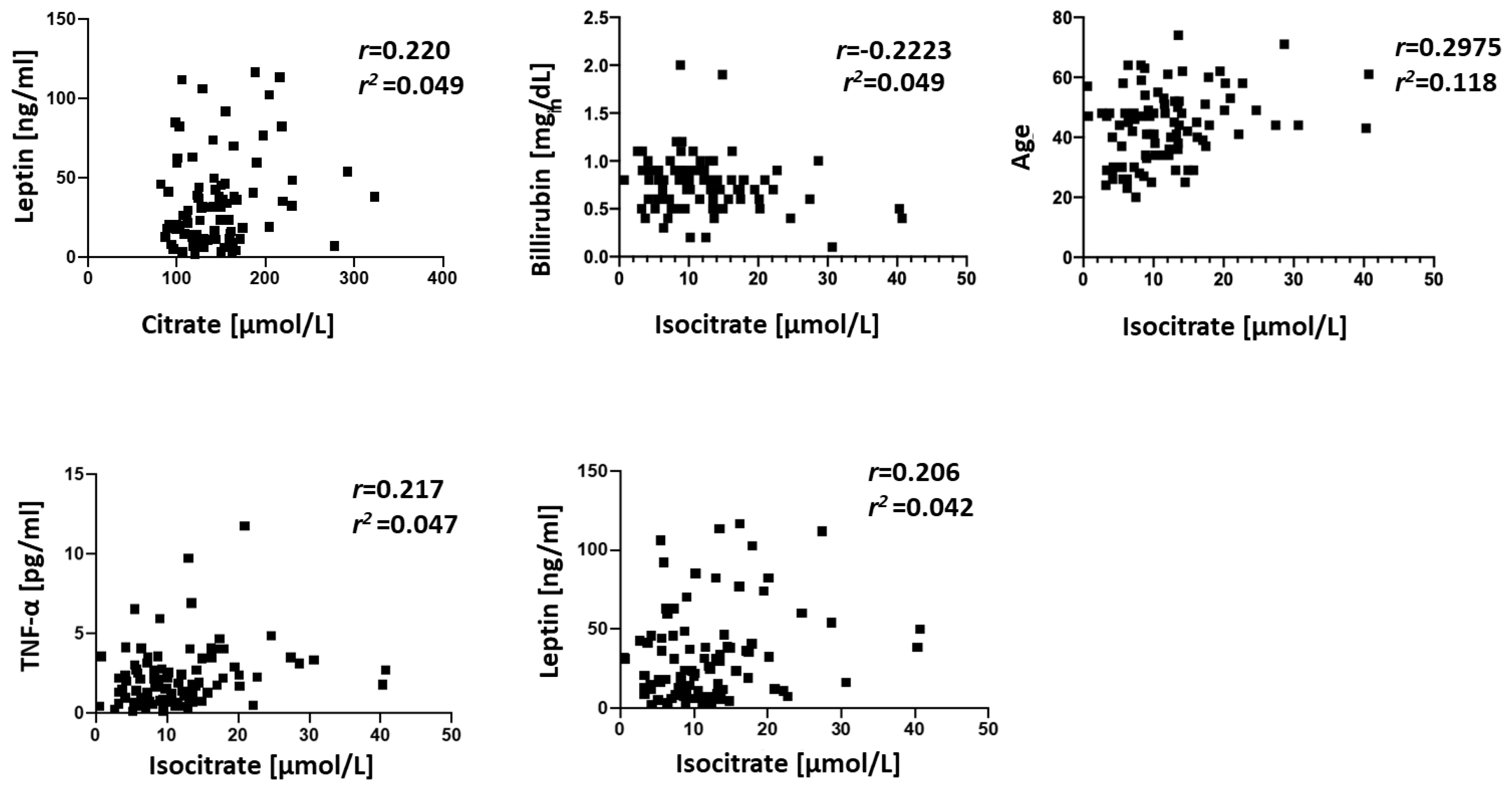