Primary Hyperparathyroidism in Sickle Cell Disease: An Unknown Complication of the Disease in Adulthood

Mental health outcomes of road traffic accidents (RTAs) are always investigated in assessments of those involved. The aim of this study was to investigate the psychological consequences and associated factors in all RTA survivors, irrelevant of their injury status. A cohort of 155 people was assessed one month after experiencing a RTA using self-reported measures for posttraumatic stress disorder (PTSD), depression, and anxiety. Associations between mental health outcomes and sociodemographic factors, pre-RTA health status, injury-related factors, and RTA details were analyzed. RTA survivors reported substantial rates of PTSD (32.3%) and depression (17.4%) symptoms, and low rates of anxiety (5.8%). Symptoms of depression were associated with below-average self-perceived economic status, irreligiousness, medication use, psychiatric medication use, and injury-related factors. PTSD symptoms were associated with female gender, below-average self-perceived economic status, previous psychiatric illness, medication use, psychiatric medication use, not being at fault in the relevant RTA, claiming compensation, and injury-related factors. Anxiety symptoms were associated with previous chronic or psychiatric illness, previous permanent pain, psychiatric medication use, and self-perceived threat to life, but not with sustaining injury. Along with the evaluation and treatment of RTA injuries, health care providers should evaluate the pre-RTA health status of all RTA victims. Psychological support to those at risk may prevent psychological disorders after RTAs. View Full-Text
Keywords: road traffic accident; posttraumatic stress disorder; depression; anxiety; injury severity road traffic accident; posttraumatic stress disorder; depression; anxiety; injury severity
►▼ Show Figures 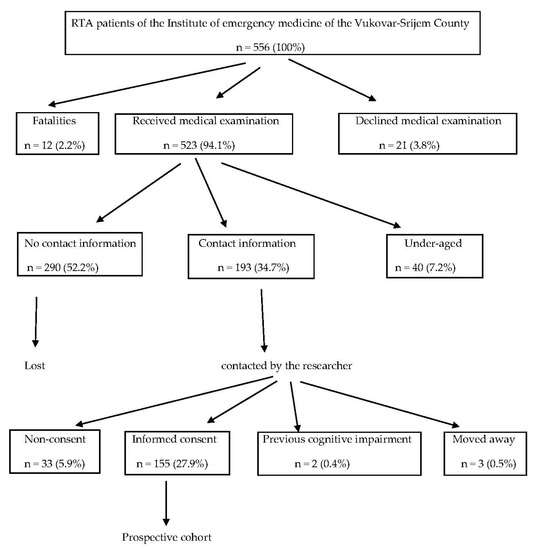