Root canal preparation during endodontic treatment may be associated with various complications, including instrument separation, tooth fracture, a flare-up, and, e.g., change in the original pathway of the root canal lumen. As uneven removal of tooth structure, particularly radicular dentin, both decreases the resistance of the tooth to fracture and may eventually cause a perforation, one of the aims in manufacturing root canal instruments is to develop a tool that would cut the root canal dentin in the most uniform way possible [1]. Moreover, the aim of root canal preparation is not only to remove irreversibly damaged organic tissue, but also to shape the root canal in such a way that irrigating liquids and obturation materials can reach the appropriate levels [2]. That is why the so-called “non-instrumental” root canal preparation methods have not gained popularity. Even though endodontic files have different shapes, they all cut dentine in a manner that enlarges the root canal space in a conical shape, and the base of the cone is then circular. However, anatomical research studies have shown beyond doubt that root canals are, in the majority of cases, irregular-shaped, and are oval or ovoid in cross-section [3]. Eventually, this discrepancy causes uneven root canal preparation and only partial removal of debris due to the fact that more dentin is removed from one side of the canal. In the most extreme cases, such complications as, e.g., zip perforation (straightening of the root canal due to excessive removal of the external wall of curvature), elbow perforation (leaving a very thin wall of dentin next to the area of zip perforation), ledge formation, or direct perforation may occur, which will make the preparation of the root canal impossible. In the long-term perspective, such lesions may negatively influence the strength of the tooth, and, therefore, lead to fracture and treatment failure [4]. Therefore, several improvements in endodontic technology have been suggested in order to overcome the issue and minimize the risk associated with excessive removal of dentin in areas that are responsible for the resistance of the tissues. According to most research studies, this danger is encountered mostly when stainless steel instruments are used for preparation, as they do not conform to the original pathway of the root canal but rather “spring back” and retain their original shape. This is observed particularly when less experienced operators (e.g., students) perform the procedure. The use of nickel-titanium (NiTi) instruments may diminish this risk; however, there are several systems of NiTi instruments available for purchase, and they differ in various aspects—metallurgy, shape, and movement kinematics. Each of the aspects may influence their cutting efficacy and shape, and the outcome of their use has been studied extensively [5,6,7,8]. The aim of our study was to determine whether files of similar sizes that use various movement kinematics (rotary, reciprocal, adaptive motion) cause root canal transportation, and whether the differences between such systems are statistically significant.

Sixty freshly extracted, single-rooted teeth with 1 root canal were chosen for the study (27 mandibular premolars, 27 maxillary premolars, 6 lateral maxillary incisors). The teeth were extracted due to universally agreed indications for extraction (non-restorability, periodontal disease, orthodontic indications). Inclusion criteria included: age (only teeth from patients aged 20–40 were chosen for the study), possibility of atraumatic extraction, absence of symptoms of parafunctions. Exclusion criteria included: root caries and pathological resorption. Only teeth with curvature up to 25 degrees were chosen. The teeth were divided into 3 groups (for each group n = 20), so that a tooth from each anatomical group would be included in each subgroup, and were then randomly classified into each of the subgroups using the Random Sequence Generator (Random.org, Dublin, Ireland) software. The methodology used for the study was adopted from the investigation by Elnaghy et al. [9]
The first stage of the experiment included a pre-operative CT scan. All scans were performed using the cone-beam computed tomography (CBCT) scanner Carestream CS 9300 (Carestream, Rochester NY, USA), with the following settings: small field of view (FOV) 5 × 5 cm, voxel size: 0.09 mm, scan time: 20 s. The teeth were placed in a silicon matrix, and lines denoting mesial, distal, buccal and palatal/lingual surfaces were marked. Afterwards, working length of the root canal was established. After access was prepared, an stainless-steel (SS) K-file (ISO 10, 2%) (Poldent, Warsaw, Poland) was placed in the root canal until its tip was visible at the apex, which was confirmed using a dental operating microscope—Leica M320 (Leica, Wetzlar, Germany). One millimeter was subtracted from this length, in order to set the working length (WL) at the physiological constriction. Afterwards, glidepath was prepared manually up to size 20/2% using manual SS K-files size 15/2% and 20/2% (Poldent, Warsaw, Poland). Then, the canals were prepared with the instruments, according to the manufacturers’ instructions:

Between each instrument insertion, the root canal was rinsed with 1 mL of 0.9% NaCl.
In the next stage of the experiment, a post-operative CT scan was performed in the same matrix. The scans were then assessed using the Osirix MD (Pixmeo SARL, Bernex, Switzeland) software. The following values were measured:

The measurements were performed at the following levels: 3, 5, 7 mm from the apex. The degree of root canal transportation was calculated using the following equation:
An example of a root section with the measurements before and after preparation is shown in Figure 1. The calculations were made in the DICOM software.
Statistical significance level was set at α = 0.05. Data normality was checked using the Shapiro-Wilk test. For parametric data, multiple group ANOVA with Fisher’s post-test was used. For data that exhibited non-Gaussian distribution, Kruskal-Wallis ANOVA with Dunn’s post-test was used. The analyses were performed using the PQStat Software (PQStat, Poznan, Poland). 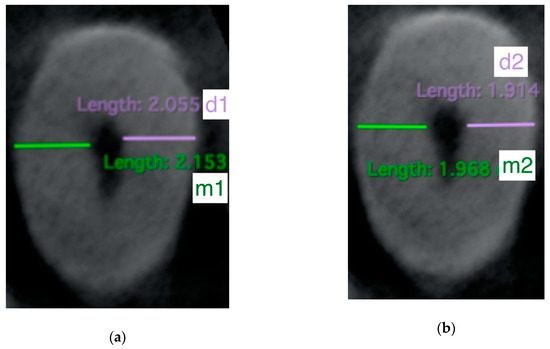 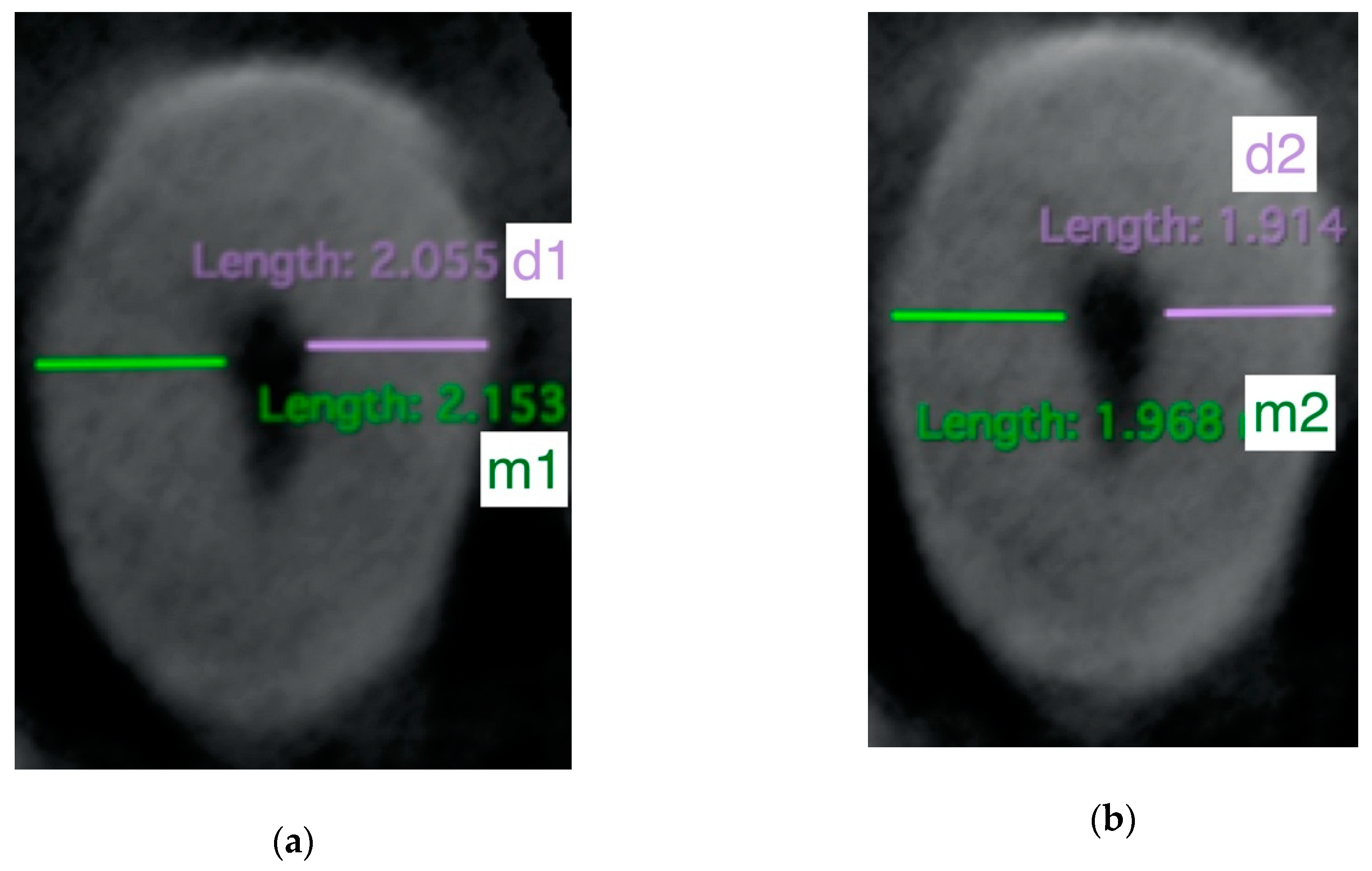