Bariatric surgery (BS) is the most effective treatment for obesity and has a positive impact on cardiometabolic risk and in the remission of type 2 diabetes. Following BS, the majority of fat mass is lost from the subcutaneous adipose tissue depot (SAT). However, the changes in this depot and functions and as well as its relative contribution to the beneficial effects of this surgery are still controversial. With the aim of studying altered proteins and molecular pathways in abdominal SAT (aSAT) after body weight normalization induced by BS, we carried out a proteomic approach sequential window acquisition of all theoretical mass spectra (SWATH-MS) analysis. These results were complemented by Western blot, electron microscopy and RT-qPCR. With all of the working tools mentioned, we confirmed that after BS, up-regulated proteins were associated with metabolism, the citric acid cycle and respiratory electron transport, triglyceride catabolism and metabolism, formation of ATP, pyruvate metabolism, glycolysis/gluconeogenesis and thermogenesis among others. In contrast, proteins with decreased values are part of the biological pathways related to the immune system. We also confirmed that obesity caused a significant decrease in mitochondrial density and coverage, which was corrected by BS. Together, these findings reveal specific molecular mechanisms, genes and proteins that improve adipose tissue function after BS characterized by lower inflammation, increased glucose uptake, higher insulin sensitivity, higher de novo lipogenesis, increased mitochondrial function and decreased adipocyte size. View Full-Text
Keywords: bariatric surgery; proteome; abdominal adipose tissue; lipogenesis; mitochondria; metabolism; immune system bariatric surgery; proteome; abdominal adipose tissue; lipogenesis; mitochondria; metabolism; immune system
►▼ Show Figures 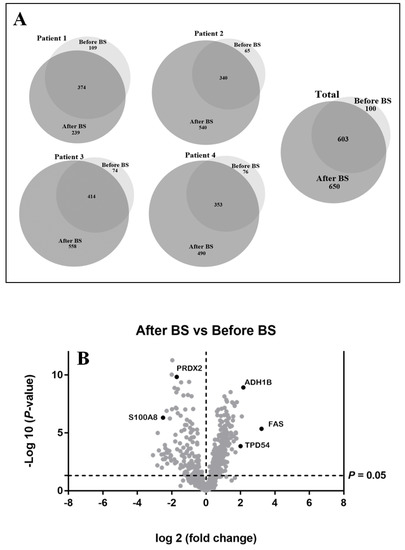