The Efficacy and Safety of Eravacycline in the Treatment of Complicated Intra-Abdominal Infections: A Systemic Review and Meta-Analysis of Randomized Controlled Trials

Comparison of Oncologic Outcomes in Laparoscopic versus Open Surgery for Non-Metastatic Colorectal Cancer: Personal Experience in a Single Institution

:
The oncologic merits of the laparoscopic technique for colorectal cancer surgery remain debatable. Eligible patients with non-metastatic colorectal cancer who were scheduled for an elective resection by one surgeon in a medical institution were randomized to either laparoscopic or open surgery. During this period, a total of 188 patients received laparoscopic surgery and the other 163 patients received the open approach. The primary endpoint was cancer-free five-year survival after operative treatment, and the secondary endpoint was the tumor recurrence incidence. Besides, surgical complications were also compared. There was no statistically significant difference between open and laparoscopic groups regarding the average number of lymph nodes dissected, ileus, anastomosis leakage, overall mortality rate, cancer recurrence rate, or cancer-free five-year survival. Even though performing a laparoscopic approach used a significantly longer operation time, this technique was more effective for colorectal cancer treatment in terms of shorter hospital stay and less blood loss. Meanwhile, fewer patients receiving the laparoscopic approach developed postoperative urinary tract infection, wound infection, or pneumonia, which reached statistical significance. For non-metastatic colorectal cancer patients, laparoscopic surgery resulted in better short-term outcomes, whether in several surgical complications and intra-operative blood loss. Though there was no significant statistical difference in terms of cancer-free five-year survival and tumor recurrence, it is strongly recommended that patients undergo laparoscopic surgery if not contraindicated.
Keywords:
laparoscopic; open surgery; non-metastatic colorectal cancer; surgical complication; oncologic outcome; single surgeon experience

The institutional Ethics of Research Committee of Chi Mei Medical Center, Taiwan permitted this study. The protocol conformed to ethical standards according to the Declaration of Helsinki published in 1964. Moreover, written or verbal consent from patients was acquired for this study.

From January 2008 to December 2013, a total of 375 consecutive colorectal cancer patients scheduled for resection by Dr. Chiu in a regional hospital with LR or OR were assessed (Figure 1). The treatment protocol was based on the National Comprehensive Cancer Network (NCCN) Guidelines®. The exclusion criteria included patients with cancer distant metastasis, synchronous tumors, adjacent organ invasion, intestinal obstruction, combined operations for other disease, history of trans-abdominal or trans-anal colorectal surgery, history of inflammatory bowel disease, polyposis, past episode of ileus related to severe intra-abdominal adhesions, morbid obesity, severe medical disease, pregnancy, emergent surgeries, patient unwilling to participate in the study, or conversion to open approach. Conversion to open approach was defined as an abdominal incision larger than necessary for specimen retrieval. Written informed consent was obtained from all patients in this study. This study divided patients into several groups according to the tumor locations. Patients of each tumor location group were randomly allocated to receive LR or OR using the random numbers belonging to that location group in the envelopes, blindly selected by the surgeon before the operation. In the LR group, all patients needed to pay for the extra fee of the harmonic scalpel and wound retractor. Data were collected in a prospectively maintained database that was supplemented by a retrospective chart review.

All LR and OR procedures proceeded with a standardized medial-to-lateral approach and non-touch technique. During LR surgery, the surgeon and camera operator stood on the opposite side of the colorectal lesion, while the first assistant positioned to the same side of the lesion. Briefly, the right hemicolectomy including the range extended to the mid-transverse colon with lymphadenectomy about the ileocolic, right colic, and middle colic vessel origin was selected for proximal lesions (those sited proximal to the flexure of the spleen). The left hemicolectomy with lymphadenectomy at the level of the left colic and the left branch of the middle colic vessel origins was selected for lesions at the descending colon. The omentum was transected to allow entry into the omental bursa and mobilization of the liver flexure (right hemicolectomy) or splenic flexure (left hemicolectomy). As lesions of the sigmoid colon or rectosigmoid junction, the sigmoid colectomy with upper rectum resection and lymphadenectomy extended to the inferior mesenteric vessel origin were selected. At least 5 cm safety surgical clearance margin was mandatory for all patients. As for rectal cancer, the technique was standardized as follows: (1) for upper third rectal lesions, a 5 cm mesorectal resection with end-to-end colorectal anastomosis was done; (2) for mid and low rectal lesions, total mesorectal excision with pouch supra-anal or anal anastomosis was performed; and (3) abdominoperineal excision was indicated once the levator muscle was involved by tumor. According to the principle of the non-touch technique, high ligation of the inferior mesenteric artery and mobilization of the splenic flexure were first systematically performed, whether the procedures were performed in LR or OR group. Dissected tissue was pulled out via a wound retractor at the extended umbilical wound for abdominal wall protection. For proximal lesions, anastomosis was routinely performed extra-corporeally. We routinely performed trans-anally intra-corporeal circular stapled anastomosis after the descending colon, sigmoid colon, or rectum lesion resection, because the residual distal intestine stump after resection was hardly managed extra-corporeally. In the OR group, the procedures were performed through a midline laparotomy with the same rules, and the wound was protected by gauze covering. The harmonic scalpel was generally used for soft tissue dissection in the LR group, but not in the OR group. Besides, in cases with difficult tumor localization by vision or palpation, an intra-operative colonoscopy would be routinely used to locate the actual tumor site instead of using other methods. However, no one in the OR group needed an intra-operative colonoscopy, but only three patients in the other group needed one.

Post-operative treatment was the same for both groups. Patients were discharged when they had sufficient oral intake, well-controlled complications, or no complications. Complications designated as more severe than grade I according to the Clavien–Dindo classification system were categorized as ileus, urinary tract infection, wound infection, pneumonia, anastomotic leakage, and so on. Besides, most patients with stage III colorectal cancer would receive post-operative chemotherapy (oral or intravenous form), except six patients of the LR group and three of the OR group owing to general weakness or intolerance to chemotherapy.

One specialized pathologist assessed all specimens. All patients were followed up with clinical examination, serum CEA assay, chest X-ray exam every three months, and liver ultrasound every six months for the first two years, and then annually. An abdominal CT exam was arranged annually. A colonoscopy was performed at one year after the operation, then every three years.

The main endpoint of this study was cancer-free five-year survival. The secondary endpoint was the incidence of tumor recurrence. Predefined baseline variables are listed in Table 1 and Table 2. Variables for the univariate analysis were gender, age, American Society of Anesthesiologists (ASA) class, tumor location, TNM stage, histopathology, pre-surgery serum CEA level, type of intervention, postoperative complications, and tumor recurrence. Categorical variables were compared using the χ2 test. Continuous variables (e.g., number of lymph nodes removed, hospitalization period, intra-operative blood loss, and operation time) were compared using Student’s t-test. Survival period was evaluated from the day of surgery to the last visit or death. For cancer-free survival, patients dying from other causes were censored at the time of death. Probability curves were constructed according to the Kaplan–Meier method and compared with the log-rank test (Table 3) (Figure 2). A p-value less than 0.05 was regarded as statistically significant. All calculations were performed using the SPSS software package version 20 (SPSS Inc., Chicago, IL, USA).

In Table 2, the rate of tumor recurrence was 9.0% (17/188) in the LR group and 13.5% (22/163) in the OR group. Although the difference was not statistically significant, tumor recurrence seemed to be lower in the LR group (p = 0.186). The average number of lymph nodes removed in LR was 16.0 ± 9.2 and 19.2 ± 13.7 in OR (p = 0.07). Tumor margins were non-involved in patients of both groups. However, this study demonstrated that LR was more effective for the treatment of colorectal cancer in terms of hospital stay (p < 0.001) and blood loss (p < 0.001). Conversely, operation time was significantly longer in LR than in OR (191.4 ± 71.1 min vs. 150.8 ± 46.3 min, p < 0.001). Compared with the LR group, more patients in the OR group encountered postoperative urinary tract infection, wound infection, and pneumonia, which reached statistical significance. Only two patients in the OR group were found with mild anastomosis leakage from the drainage tube clinically. Abdominal CT confirmed the diagnosis and that the degree was mild. These two patients received conservative treatment, including intravenous fluid supply and nil per os. However, further surgical intervention was not necessary.

Within the limitations of this study, the results showed better short-term outcomes in terms of postoperative urinary tract infection, wound infection, pneumonia, and blood loss in LR versus OR for non-metastatic colorectal cancer. Although the differences regarding cancer-free five-year survival and tumor recurrence did not reach the statistical significance of both groups, it is strongly recommended that patients undergo laparoscopic surgery if not contraindicated.

This study was approved by the institutional review board of Chi Mei Medical Center, 10410-L03. 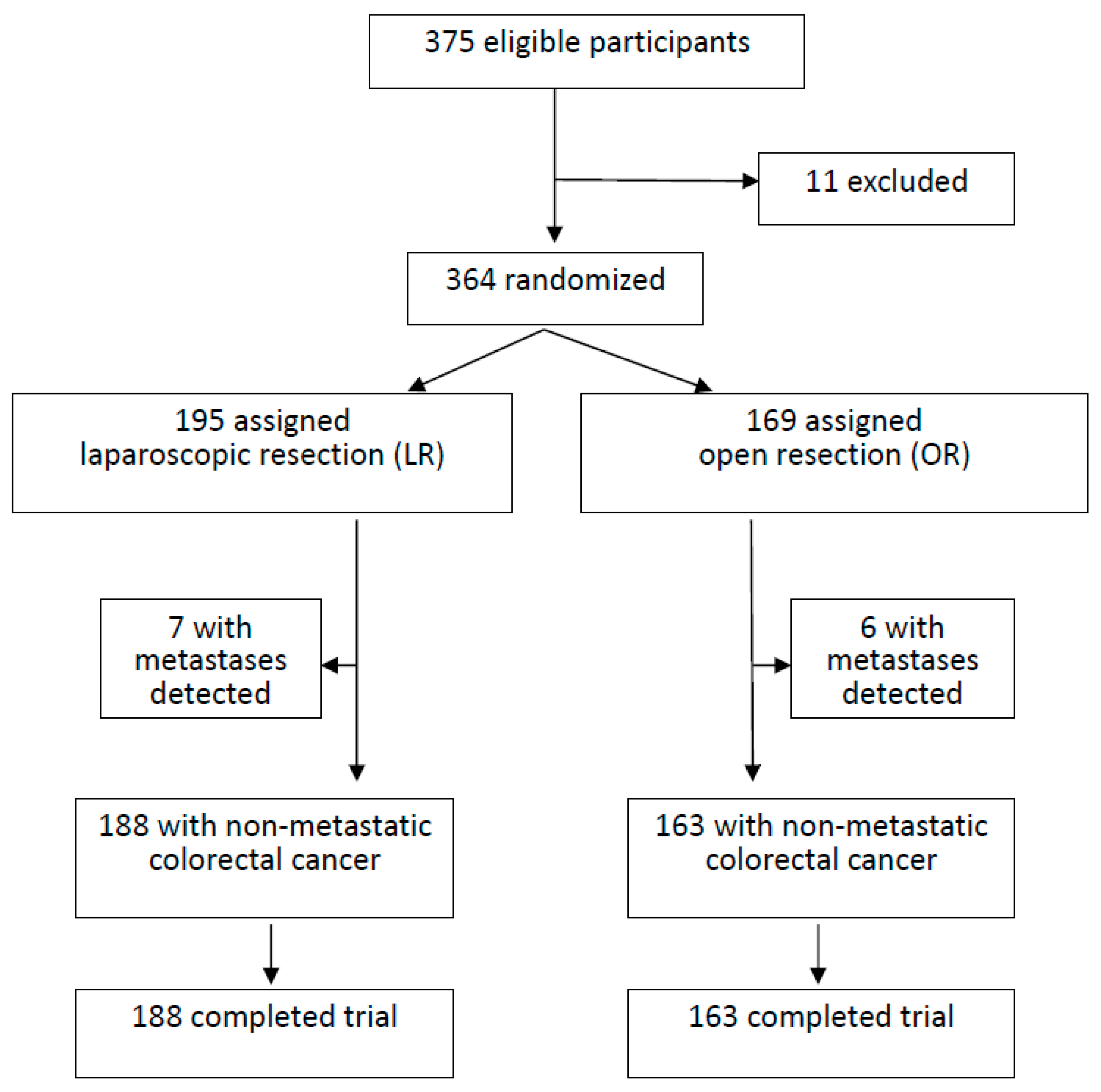 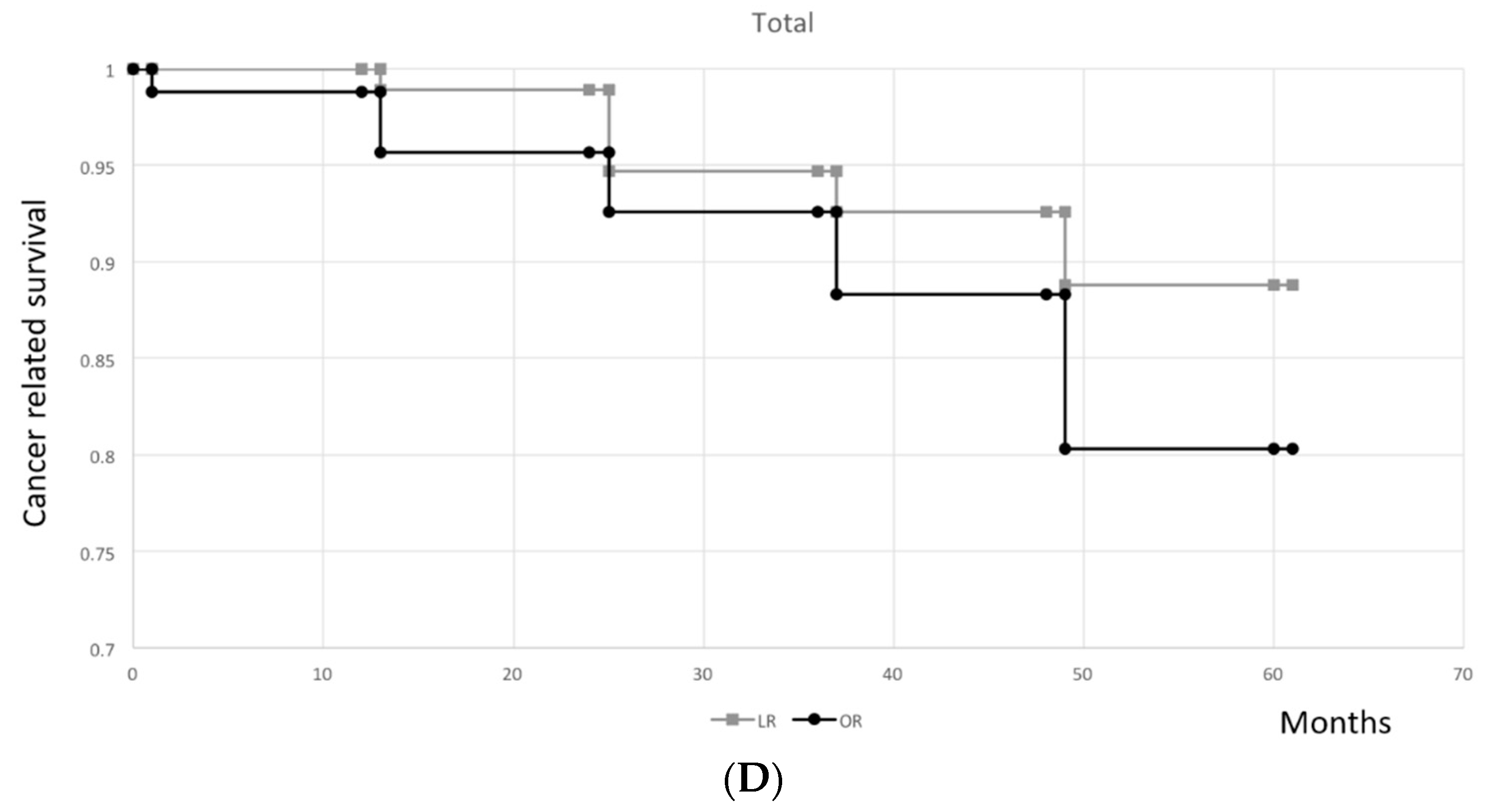