Background: Patients with chronic obstructive pulmonary disease (COPD) often suffer from multiple morbidities, which occur in clusters and are sometimes related to accelerated aging. This study aimed to assess the disease specificity of comorbidity clusters in COPD and their association with a biomarker of accelerated aging as a potential mechanistic factor. Methods: Body composition, metabolic, cardiovascular, musculoskeletal, and psychological morbidities were objectively evaluated in 208 COPD patients (age 62 ± 7 years, 58% males, FEV1 50 ± 16% predicted) and 200 non-COPD controls (age 61 ± 7 years, 45% males). Based on their presence and severity, the morbidities were clustered to generate distinct clusters in COPD and controls. Telomere length in circulating leukocytes was compared across the clusters. Results: (co)morbidities were more prevalent in COPD patients compared to controls (3.9 ± 1.7 vs. 2.4 ± 1.5, p < 0.05). A “Psychologic” and “Cachectic” cluster were only present in the COPD population. “Less (co)morbidity”, “Cardiovascular”, and “Metabolic” clusters were also observed in controls, although with less complexity. Telomere length was reduced in COPD patients, but did not differ between the (co)morbidity clusters in both populations. Conclusions: Two COPD-specific comorbidity clusters, a “Cachectic” and “Psychologic” cluster, were identified and warrant further studies regarding their development. Accelerated aging was present across various multimorbidity clusters in COPD. View Full-Text
Keywords: comorbidity; multimorbidity; cluster; COPD; accelerated aging; telomere length comorbidity; multimorbidity; cluster; COPD; accelerated aging; telomere length
►▼ Show Figures 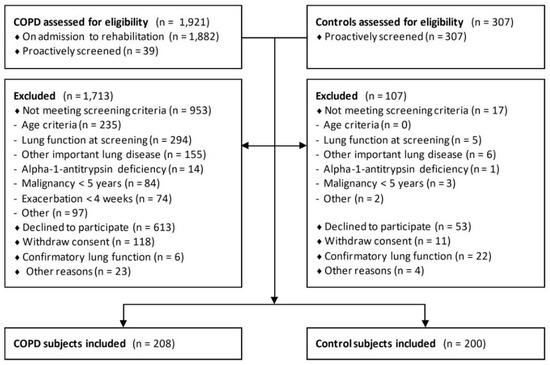