The Effects of Helmet Therapy Relative to the Size of the Anterior Fontanelle in Nonsynostotic Plagiocephaly: A Retrospective Study
Previous Article in Journal

Deformational plagiocephaly (DP) refers to an asymmetrical head shape resulting from environmental forces on the infant’s cranium. Since 1992, the American Academy of Pediatrics (AAP) has recommended that infants sleep in a supine position to prevent sudden infant death syndrome (SIDS). After that, the reported prevalence of DP has risen as high as 46.6% in Canada [1,2,3]. However, the reported prevalence rates have a wide range, as the prevalence is affected by the evaluation age of the infants, the diagnostic methods used, the decade when the research was performed, and the prevention and follow-up aspects offered by local health professionals [4,5,6,7,8,9,10,11].
The most common visible features in DP are one-sided occipital flattening, forward displacement of the same-sided ear and malar complex, same-sided frontal bossing, and opposite side occipital bossing [11,12,13,14,15,16]. Frontal DP is uncommon [17]. A hairless bald area on the flattened side of the head, a preferred head position, and a restricted cervical motion are common associated findings.
Because the skullcap of preterm infants (born at a gestational age less than 37 weeks) is very thin and malleable during the early months of life, preterm infants are, according to the literature, at a higher risk for both symmetrical and asymmetrical head molding. The more preterm the infant is, the longer the time from birth to full control of head position; hence, the most immature preterm infants are the most prone to external cranial molding. Cranial narrowing, or dolichocephaly, is commonly described as a typical cranial appearance of very preterm infants, especially at term equivalent age (TEA) [18,19]. Additionally, preterm infants go through a long period of hospital care before their discharge home, and if no attention is paid to varying the head position from early on in the neonatal intensive care unit (NICU), preterm infants frequently develop DP [19,20,21]. If preventive and proactive positioning advice in infant care and handling are provided to the guardians early enough, at least the most severe forms of DP can be prevented in term or near-term newborns infants [3,7,22,23].
The aim of this study was to use 3D stereophotogrammetry to assess cranial molding with a special emphasis on the incidence of plagiocephaly in preterm children in comparison to term born children in early childhood.

This prospective case-control study was conducted in the Department of Children and Adolescents, Oulu University Hospital, and the Unit of Oral Health Sciences, University of Oulu, Finland. Thirty-four healthy preterm infants (born before 37 completed gestation weeks), and 34 healthy term born controls (born after 37 completed gestation weeks), were enrolled into this follow-up study. There were 11 females and 23 (67.6%) males in each group. The control group was randomly selected from a previously collected nonintervention cohort [8] by computer-based random selection and matched to gender. All participants were born on preselected dates between the years 2012 and 2015 in Oulu University Hospital and entered into the study before their discharge home after birth. Infants were considered eligible if they had no cheilopalatoschisis, craniosynostosis, or dysmorphic features and if they resided within the Oulu region.
Approval for the study was obtained from the ethics committee of the Northern Ostrobothnia Hospital District (Oulu University Hospital; EETTMK 27/2011), and the study complies with the Declaration of Helsinki. The parents of participants authorized study entry by written informed consent. The study was registered with the National Clinical Trials register (NCT02283229).
To reliably compare preterm subjects to term born controls, their ages were computed from the expected date of birth, the term equivalent age (TEA). Subjects attended the study at predetermined time points from the TEA up to the age of 3 years targeted as follows: 2–4 months (T1), 5–7 months (T2), 11–13 months (T3), and 2.5–3 years (T4). At each visit, 3D images of the head were obtained using a 3dMD head 5-pod camera system (3dMD, Atlanta, Georgia, USA). Height, weight, and head circumference measurements were obtained at birth and T1–T4 visits.

The 3D images were processed and analyzed with the Rapidform 2006 (Geomagic, Rock Hill, SC, USA) 3D software system using custom macros written with Visual Basic for Applications (VBA). More complex mathematical analyses were performed with MATLAB R2014b (MathWorks, Natick, MS, USA).
The point-to-point variables oblique cranial length ratio (OCLR) and cephalic index (CI), as well as the 3D surface variables, weighted asymmetry score (wAS), and flatness score (FS) based on surface normal vector distribution, were measured from the 3D images [24] (Figure 1).
The diagnosis of DP was based on OCLR, with 104% as the cut-off value for DP, which has been described as the most optimal and clinically relevant cut-off point [4,25]. The severity of DP was also categorized based on OCLR: OCLR 104–107.9% indicates mild; OCLR 108–111.9% indicates moderate; and OCLR ≥ 112% indicates severe DP [5,7].

The normality was assessed using the Shapiro–Wilk normality test. The independent samples t-test was used to compare maternal age, gestational age, weight, length, and head circumference between preterm and full-term groups for normally distributed data, and the Mann–Whitney test was used for non-normally distributed data. For outcome variables OCLR, CI, wAS, and FS, the normal distribution of the data could not be verified, so the Mann–Whitney test was used to compare variables between preterm and full-term groups and further between the following subgroups: nonsingletons and singletons, and boys and girls. To compare variables between the subgroups of very preterm (VPT), moderate preterm (MPT), and late preterm (LPT) infants, the Kruskal–Wallis test was used, and Bonferroni corrections were used for post-hoc analyses. The level of significance was set at p < 0.05. All statistical work and data analyses were conducted using IBM SPSS Statistics version 25.

Of the 34 preterm and 34 term born infants who participated in this study, two moved away from the area and were unable to visit at T3 and T4. Two preterm infants were unable to show up at T3 but were able to return at T4. One term born control participant refused to put a stocking cap on at T4, so the images could not be analyzed because of the hair. The mean (SD) corrected ages of preterm versus term born participants were in T1, 3.0 (0.8) versus 3.6 (1.0) months (p = 0.012); in T2, 6.5 (1.2) versus 6.8 (1.0) months; in T3, 12.9 (1.2) versus 13.3 (0.7) months; and in T4, 3.3 (0.1) versus 3.3 (0.1) years. There were no statistically significant differences in the mean ages of the groups at timepoints T2–T4.
There were 11 female and 23 (67.6%) male subjects in each group. All control cases and 14 (41.2%) of the preterm cases were born as singletons. Ten cases of the preterm group were very preterm (VPT, born before 32 completed gestation weeks); 13 were moderate preterm (MPT, born before 34 but more than 32 gestation weeks); and 11 were late preterm (LPT, born between 34 and 37 gestation weeks). Subject characteristics and common growth data are shown in Table 1.
As shown in Table 2, no statistically significant difference in OCLR between preterm and full-term children was noted. In both groups, OCLR improved gradually over time (Figure 2). Equally, the number of DP in both groups decreased over time from T1 to T4 (Table 3). There were no severe DP in either group at any time, and there were no instances of moderate DP after T2. Between the two groups, there was no statistically significant difference in the mean CI. However, the mean FS, indicating occipital flatness, was statistically significantly greater in the preterm group than in the term group in every time point T1–T3 (Table 2).
There were no statistically significant differences in the mean values of OCLR, CI, wAS, or FS between the genders.
Table 4 describes the cranial parameters between the subgroups of VPT, MPT, and LPT infants. CI was smaller in the VPT group compared to the LPT group at T1 and T4. The median value of OCLR was significantly greater in the subgroup of LPT infants compared to MPT infants at T3–T4 (Table 4).

In this study, DP was found to affect preterm and full-term children almost equally during the first three years of life, and cranial asymmetry resolved at a similar rate in both preterm and term born children after three months of corrected age. The average cranial shape among Finnish children is relatively dolichocephalic. Very preterm born infants have a more dolichocephalic skull shape than late preterm, but despite this, preterm infants present with more occipital flattening than full-term children.

We are grateful to all the children and their families who participated in the study. 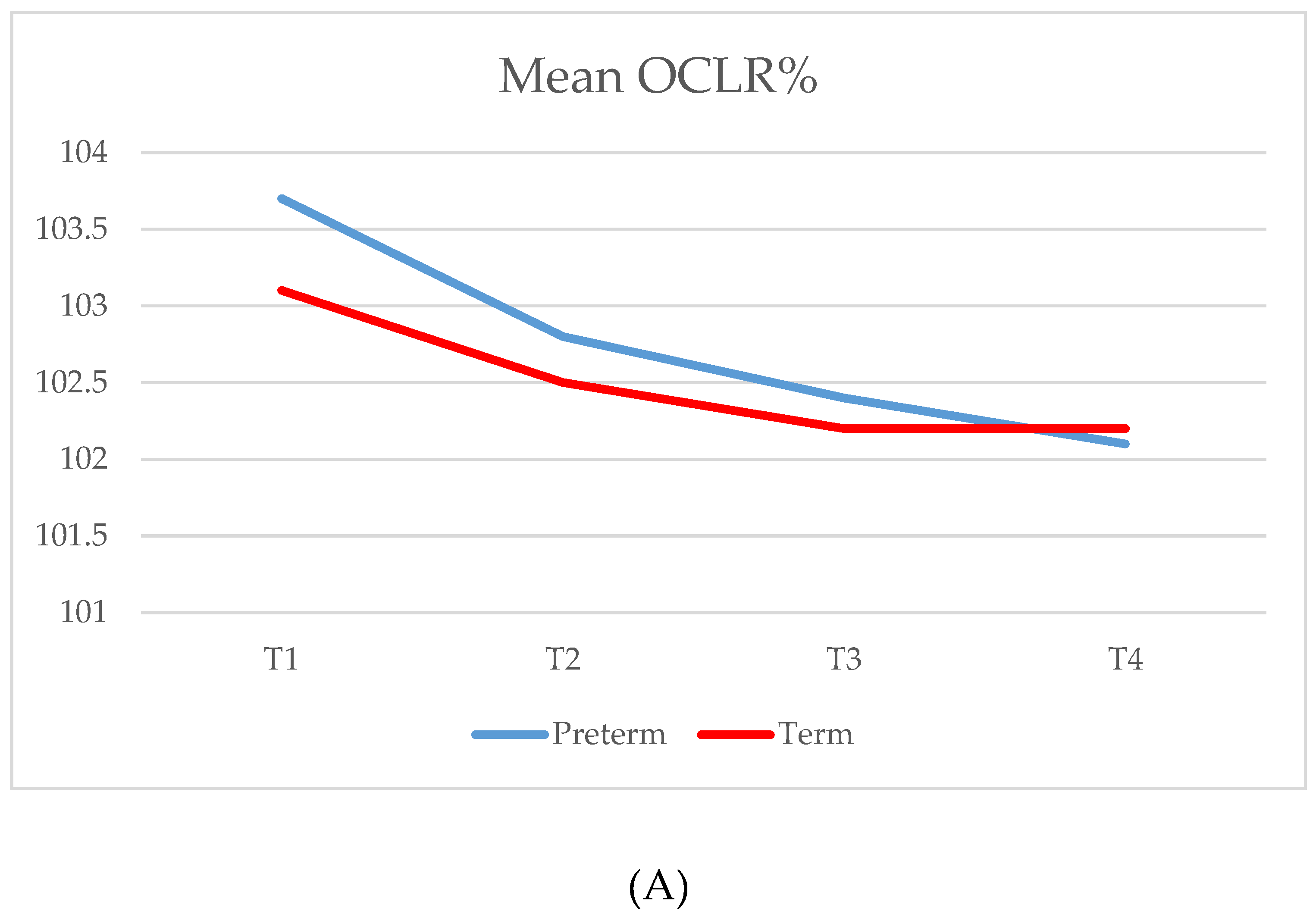 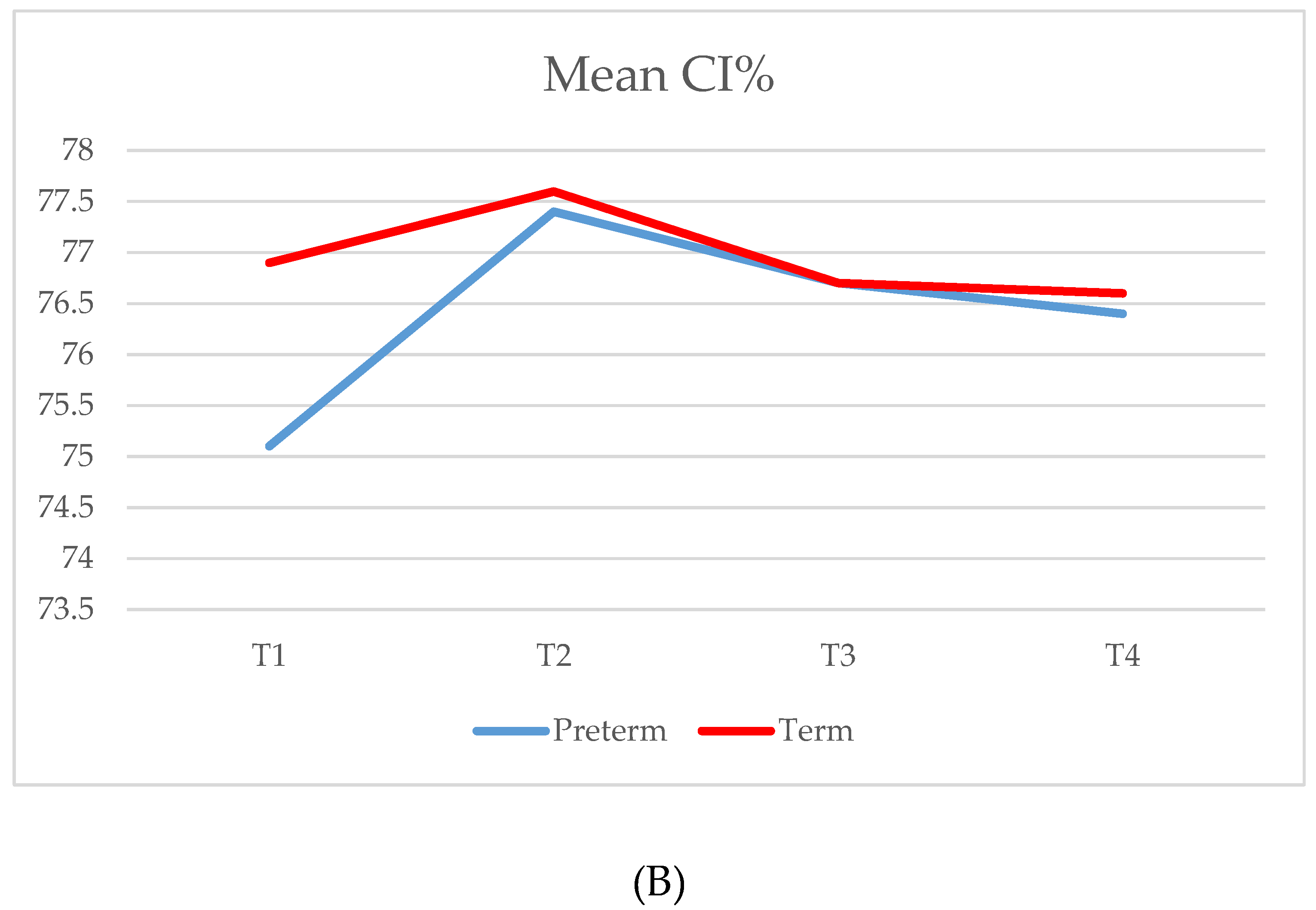