Is Machine Learning a Better Way to Identify COVID-19 Patients Who Might Benefit from Hydroxychloroquine Treatment?—The IDENTIFY Trial

:
The Japanese government initiated the Go To Travel campaign on 22 July 2020, offering deep discounts on hotel charges and issuing coupons to be used for any consumption at travel destinations in Japan. In the present study, we aimed to describe the possible epidemiological impact of the tourism campaign on increasing travel-associated cases of coronavirus disease 2019 (COVID-19) in the country. We compared the incidence rates of travel-associated and tourism-related cases prior to and during the campaign. The incidence of travel-associated COVID-19 cases during the tourism campaign was approximately three times greater than the control period 22 June to 21 July 2020 and approximately 1.5 times greater than the control period of 15 to 19 July. The incidence owing to tourism was approximately 8 times and 2–3 times greater than the control periods of 22 June to 21 July and 15 to 19 July, respectively. Although the second epidemic wave in Japan had begun to decline by mid-August, enhanced domestic tourism may have contributed to increasing travel-associated COVID-19 cases during 22 to 26 July, the early stage of the Go To Travel campaign.
Keywords:
tourism; sightseeing; epidemiology; severe acute respiratory syndrome coronavirus 2 (SARS-CoV-2); coronavirus disease 2019 (COVID-19); mobility

As of 1 November 2020, Japan had recorded a total of 99,959 confirmed cases of coronavirus disease 2019 (COVID-19), including 1765 deaths [1]. Owing to widespread domestic transmission, a state of emergency was declared on 7 April 2020 in seven prefectures (Tokyo, Saitama, Chiba, Kanagawa, Osaka, Hyogo, and Fukuoka); this was expanded to all 47 prefectures on 16 April 2020. The incidence of COVID-19 subsequently decreased over time [2], and the state of emergency was gradually lifted on 14 May, and had been lifted in all prefectures by 25 May 2020. Following the end of the first wave, a resurgence of COVID-19 cases was seen from late June in urban prefectures, most notably in Tokyo and Osaka; the reported number of confirmed cases reached 1595 cases per day on 7 August 2020. In response, local prefectural governments implemented focused interventions to reduce disease transmission in high-risk settings, including nightclubs, bars, and restaurants. The incidence of COVID-19 peaked between late July and early August in many prefectures; the prevalence of hospital admissions peaked on 10 August with 13,724 cases and then declined. Presently, Japan is facing a third epidemic wave, with a marked resurgence in the number of COVID-19 infections beginning in early October 2020 [1].
The impact of COVID-19 has affected various industrial and social sectors, most notably the tourism sector, including hotels, lodging, and transportation. The Japan Tourism Agency regularly conducts the Overnight Travel Statistics Survey [3] and has estimated that the relative number of hotel guests staying in business hotels, resort hotels, city hotels, and ryokan (a classical Japanese style lodging) from March to June in 2020 decreased by 48.9–84.9% compared with the same period in 2019. Moreover, the total number of foreign visitors to Japan was 32 million in 2019, but the cumulative count by October 2020 was only 4 million [4]. As an economic countermeasure to rescue adversely affected sectors by boosting consumer activities, the Japanese government initiated the “Go To Travel” campaign on 22 July 2020, slightly ahead of its originally scheduled start date (early August 2020). July 22 was the day before the 4-day holiday from 23 to 26 July. The campaign offered drastic discounts on hotel charges and issued coupons that acted as a “cash back” system and that could be used for any type of consumption at travel destinations, thereby increasing consumer demand with the aim of stimulating economic activity at local levels [5]. Similarly, other countries have promoted domestic travel in various ways [6].
Enhancing human mobility can facilitate the transmission of COVID-19. There was a concern among all involved prefectures to run the campaign [7]. Because the epidemic activity in Tokyo was intense during late July 2020, any travel to Tokyo was excluded from the Go To Travel campaign, and residents of Tokyo were not permitted to enjoy the benefits of the campaign [8]. In fact, the governor of Tokyo requested that Tokyo residents practice self-restraint and refrain from traveling outside the city; this was announced shortly before and after the Go To Travel campaign (e.g., the governor’s statement on 15 July [9]). Moreover, Okinawa Prefecture experienced a surge of COVID-19 cases and the governor declared a state of emergency on 1 August 2020, requesting that Okinawa residents do not leave the city and for other travelers to reconsider visiting Okinawa [10]. In mid-August, there is the Obon holiday season in Japan, during which many people visit their hometowns. Prior to Obon, most prefectures warned their residents and prospective visitors to carefully decide whether or not to visit their hometowns, especially when feeling unwell [11].
To understand the potential drawbacks of the Go To Travel campaign, epidemiological analysis of travel-associated transmission dynamics is imperative. The potential effects of enhancing mobility can range from increased infections among travelers to enhanced virus transmission at local levels. As a first evaluation attempt, in the present study, we focused on the epidemiological patterns of travel-associated cases of COVID-19 in remote prefectures of Japan. We aimed to describe the possible impact of the Go To Travel campaign on increasing travel-associated cases of COVID-19 infection caused by increased mobility across prefectural borders in Japan.

The present study was a descriptive epidemiological study using publicly available data (surveillance data). We scanned all press release datasets of confirmed COVID-19 cases reported by prefectural governments in Japan. Among the total 47 Japanese prefectures, 24 prefectures consistently provided information regarding mobility patterns across prefectural borders for each confirmed case. That is, travel information for patients with confirmed COVID-19 was reported by those local governments if he/she had a history of travel within 7 days (within 14 days in some prefectures) prior to disease onset. We retrieved these case counts prior to and during implementation of the Go To Travel campaign.

We analyzed COVID-19 cases reported by prefectural governments from 1 May to 31 August 2020. The latest time that we screened the press release was mid-November 2020. To understand the impact of the Go To Travel campaign, the possible date of infection rather than the date of reporting for cases was considered when grouping and comparing those who may have been infected before and during the campaign. To infer the possible date of infection, we had two sets of cases for analysis: (i) all cases with a known date of illness onset and (ii) all cases with a known date of COVID-19 confirmation. We subtracted 5 days (= the mean incubation period [12]) from the date of illness onset and 10 days (= the sum of mean incubation period and mean time from illness onset to report [13]) from the date of confirmation such that the calendar date of the respective cases was converted to the assumed date of infection. Average turnaround time of polymerase chain reaction testing was 1 day, and this was included as part of the time delay from illness onset to reporting.
According to contact history, cases were grouped by movement history across prefectural borders prior to illness onset; hereafter, travel-associated cases refer to those individuals that crossed prefectural borders. If the travel history was known, travel-associated cases were further classified according to the purpose of travel (i.e., business, family visit, or tourism/sightseeing). Travel-associated cases included those individuals who themselves had crossed prefectural borders and those who had contact with someone who had done so.

The incidence of travel-associated cases during the Go To Travel campaign was compared against the incidence before the start of the campaign, using the incidence rate ratio (IRR). The IRR is the ratio of incidence, comparing two periods of time, and the value above 1 indicates that the incidence during Go To Travel campaign increased compared with the baseline period. Specifically, the IRR was calculated according to travel history, and we also calculated the IRR of cases involving travel for tourism purposes, which was the aim of the tourism campaign. The treatment period was defined as 22–26 July (5 days), where 22 July was the first date of the campaign, coinciding with a 4-day holiday from 23 to 26 July 2020. Hereafter, we refer to this period as Period 2. We considered two different time periods as our controls: (i) 22 June to 21 July, the 30 days (Period 1a) prior to the campaign, and (ii) 15–19 July, a 5-day period (Period 1b) prior to the campaign, set to include the same days of the week as Period 2. Although the Go To Travel campaign continued into August, the campaign involved a fixed budget and the campaign ceased once the budget ceiling was reached. In the case of the first campaign from 22 July, the deadline for coupon redemption was set to 31 August 2020. The Obon festival holiday is celebrated in Japan in mid-August; therefore, we also examined the incidence from 8 to 31 August 2020 (24 days) as Period 3 for a comparison to the later stage of the tourism campaign.

In the present study, we analyzed publicly available data, which had been de-identified upon press release. The present study was approved by the Medical Ethics Board of the Graduate School of Medicine, Kyoto University (R2673).

H.N. conceived the study and participated in the study design. A.A. performed data collection, analysis planning, coding of statistical programs, and estimated the incidence rate ratio. A.A. and H.N. drafted the manuscript. Both authors read and agreed to the final version of the manuscript.

The present study was approved by the Medical Ethics Board of the Graduate School of Medicine, Kyoto University (R2673).

Data is contained within the supplementary material: The data presented in this study are available in Tables S1 and S2. 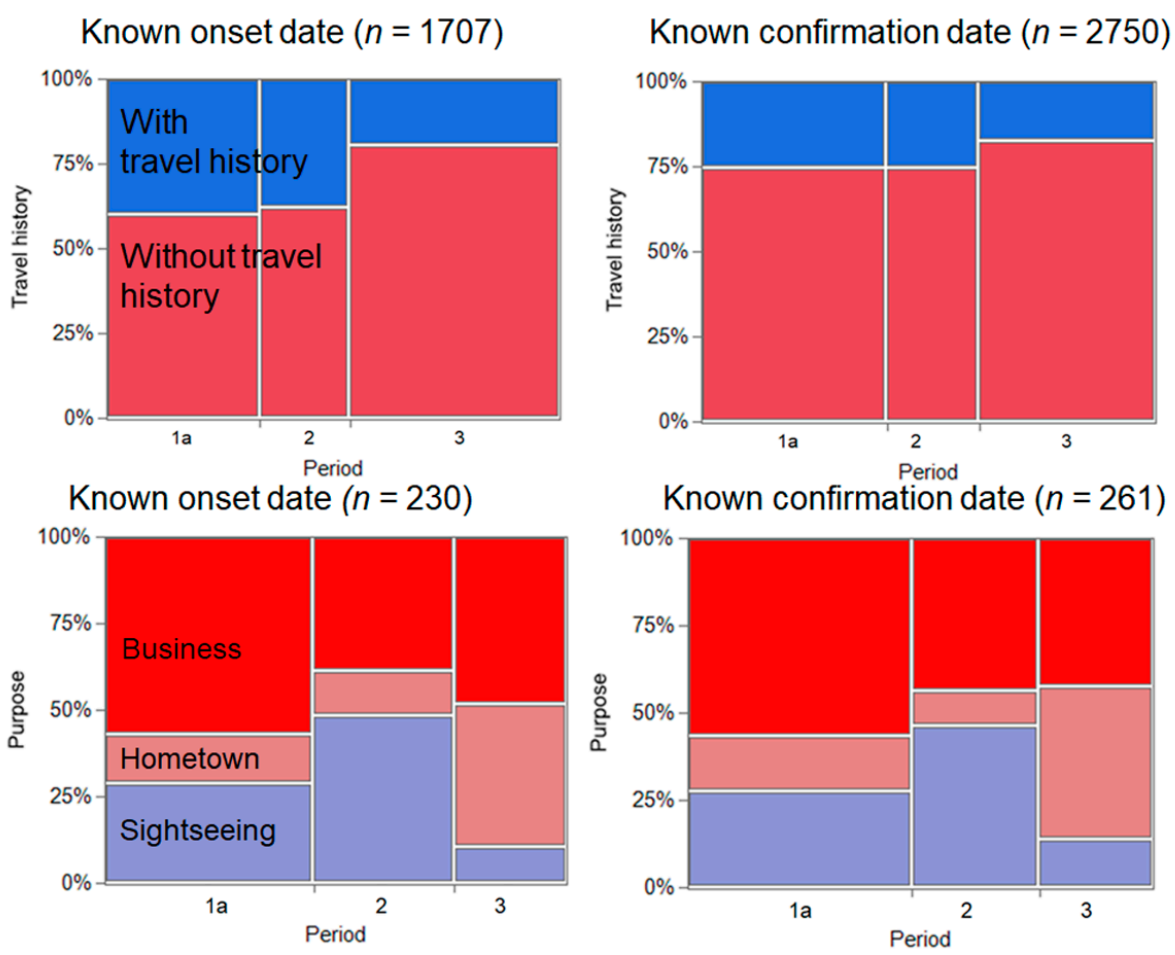