:
A major limitation in using membrane-based separation processes is the loss of performance due to membrane fouling. This drawback can be addressed thanks to surface modification treatments. A new and promising surface modification using green chemistry has been recently investigated. This modification is carried out at room temperature and in aqueous medium using green catalyst (enzyme) and nontoxic modifier, which can be safely labelled “green surface modification”. This modification can be considered as a nucleus of new generation of antifouling membranes and surfaces. In the current research, ferulic acid modifier and laccase bio-catalyst were used to make poly(ethersulfone) (PES) membrane less vulnerable to protein adsorption. The blank and modified PES membranes are evaluated based on e.g., their flux and protein repellence. Both the blank and the modified PES membranes (or laminated PES on silicon dioxide surface) are characterized using many techniques e.g., SEM, EDX, XPS and SPM, etc. The pure water flux of the most modified membranes was reduced by 10% on average relative to the blank membrane, and around a 94% reduction in protein adsorption was determined. In the conclusions section, a comparison between three modifiers—ferulic acid, and two other previously used modifiers (4-hydroxybenzoic acid and gallic acid)—is presented.
Keywords:
enzyme-catalyzed modification; poly(ethersulfone) membrane; protein repellence; antifouling membranes; ferulic acid; laccase; green chemistry

The CIELAB coordinates for the modified membranes were measured with a ColorFlex (HunterLab spectrophotometer, D 65/10°, Reston, VA, USA) as described in our previous work [28]. Aperture size was 8 mm diameter. The membranes were washed by filtration with at least 200 mL deionized water and then dried for 48 h before the actual color change was measured. The color values L* (lightness), a* (red-green axes), b* (yellow-blue axes), and ∆E* were determined using compare mode and the blank membrane was used as the standard surface. ∆E* is the degree of color change, which is calculated from [(L*)2 + (a*)2 + (b*)2]0.5. All parameters were determined as the average of three readings of each membrane circle.
Real blank and modified PES membranes were imaged using a Scanning Electron Microscope (SEM, Jeol Jsm 6360LA, Shimadzu, Japan). The membrane samples were cut using a very sharp shaving blade and were coated with Au, and were imaged at a voltage of 30 KV, and a resolution of 1280 × 960 pixels. Elemental analysis of the modified membranes was carried out by using SEMEDX- Integrated Analysis System. The Energy-dispersive X-ray Spectroscopy (EDX or EDS) analysis system works as an integrated feature of SEM (Si Li detector, detection area 10 mm2, Shimadzu, Japan)]. The X-rays are generated in a region greater than one micron in depth of real membranes. A JEOL JPS-9200 X-ray Photoelectron Spectrometer (XPS, Shimadzu, Japan) was used for surface analysis of the elemental composition of the real modified membranes to a depth of around 5 nm as described in our previous work [27]. High-resolution spectra were obtained under UHV conditions using monochromatic Al Kα X-ray radiation at 12 kV and 25 mA, using analyzer pass energy of 10 eV. All high-resolution spectra were corrected with a linear background before fitting.
A dead-end stirred ultrafiltration cell (Millipore, Model 8050, active transport area 13.4 cm2) was used to characterize the filtration performance of real blank and modified membranes as done in our previous work [28]. The amount of material grafted onto the membrane surface is determined from the weight of the membrane, before and after grafting, and the grafting yield is expressed as the weight increases relative to the membrane surface area. Before grafting, all the membranes were kept for 48 h in desiccators to keep them dry.
Bovine Serum Albumin (BSA) was used as a model compound to evaluate total protein adsorption on real blank and modified membranes as illustrated in our previously published paper [28]. Briefly, a standard curve using different prepared BSA concentration was prepared using spectrophotometer at 280 nm wavelength. The membrane circles were shaken for 24 h in 50 mL 1g∙L−1 BSA concentration and then the non-adsorbed BSA was determined. The adsorbed BSA (i.e., reversible and irreversible adsorbed protein) was calculated from the difference between the initial and residual BSA concentrations relative to membrane surface area.
The membrane flux after BSA adsorption was carried out as follows. First, the membrane was backwashed using 200 mL of deionized water to remove any unbound BSA (reversible adsorbed protein), and then forward washed using 200 mL of deionized water. After that, fresh deionized water was used in forward motion at 1 bar applied pressure, and the flux was determined. The reported values are the average of three independent measurements.
Laccase-catalyzed modified model PES surfaces (see next section) were characterized by static water contact angle measurements performed using Krüss DSA 100 apparatus. A drop of demineralized water (7 µL) was deposited on three different spots of each spin-coated (model) sample and the average was calculated. Scanning Probe Microscope (SPM, Shimadzu, Japan) was used to image model PES surface prepared as described below. Non-contact mode was used to image 5 µm × 5 µm.

The preparation of model surface was described in previous research [17] and will be described here briefly. The thickness of the native silicon dioxide layer (2.5 nm) was increased to approximately 70 nm by heating at 1000 °C for 100 min. Then, the wafers were cut into strips of 1 cm × 4.5 cm and were sonicated in ethanol for 15 min, washed with water and ethanol, and dried in flowing nitrogen. The thickness and refractive index of silicon dioxide layer were determined with a computer-controlled null ellipsometer (Sentech instruments Gmbh) at λ = 632.8 nm and angle of incidence 70°. Values of 3.85 and 0.02 were used for the refractive index (n) and the imaginary refractive index (k) of silicon [37,38], respectively. Then, the strips were given a plasma treatment (PDC-32G, Harrick at RF-level high) for 10 min and were used as substrate for the model PES surfaces by spin coating them with 0.25% w/w PES solution in dichloromethane for 10 seconds at 2500 rpm. Subsequently, the PES coated strips were put at 300 °C for 60 min. The thickness and refractive index of PES layers deposited on silicon dioxide were determined by ellipsometry. The spin-coated PES model surfaces were then modified using laccase (see respective section). The surfaces were kept for 24 h in glass-covered dishes in desiccators supplied with silica gel to remove any moisture. After drying, the thickness and refractive index of the modification layer was determined by ellipsometry. The refractive index initial values used for the silicon dioxide, PES, and modification layers were 1.46, 1.65, and 1.57, respectively [37]. Each measuring value was taken as an average of three different reads from three different locations on two different strips.

Flat membranes were modified as described in previous work [17,28]. Briefly, membranes were incubated in 40 mL 0.1 M sodium acetate buffer (pH 5) containing different concentrations of ferulic acid (monomer) and enzyme laccase. Ferulic acid, was used at concentrations of 0.6, 1.2, 4.8, 10.0, and 28.8 mM, and modification times of 0.5, 1, 2, 8, and 24 h. The enzyme concentrations tested were 0.1, 0.5, 0.7, and 1 U·mL−1. Different reaction temperatures (25, 35, 45, 55, 65 and 75 °C) were tested. After the modification time was completed, the membranes were washed by strong flushing with water, repeated dipping in deionized water and subsequent decantation. The modified membranes were kept in glass-covered dishes in desiccators for drying. The spin-coated PES model surfaces were treated in the same way as described before using 20 mL 0.1 M sodium acetate buffer containing different concentrations of ferulic acid and laccase.

In this paper, the modification of PES membranes using ferulic acid modifier and the enzyme laccase was presented. The modified membranes showed a significant reduction in protein adsorption, while the clean water flux was not greatly reduced due to modification. Although, relatively dense modification layers of poly(ferulic acid) are formed, the clean water flux remains high. The obtained results of this study support the previous conclusions [17,27,28] in which there is no straight relationship between the amount of added material (GY) and total protein adsorption. In general, the addition of ferulic acid resulted in improvement in the static water contact angle on the model PES surface, which, consequently, increases the surface hydrophilicity. However, there is no direct relationship between the surface hydrophilicity and its protein repellence (i.e., the modified model PES surface that shows the lowest contact angle does not correspond to the lowest total protein adsorption on the real membrane). Most probably, the internal polymer structure is the major effector on the created surface property (antifouling surface). SPM imaging assists the SEM and confirms the reported proposition that the modifier with three legs most probably grows as a pancake-like layer structure (in the three dimensions, 3D). Table 3 illustrates the difference between the ferulic acid modifier compared to two other modifiers (4-hydroxybenzoic acid and gallic acid) previously studied [28].
From Table 3, the GY of the ferulic acid is higher than the GY of the other two phenolic acids, whereas the layer thickness of the three modifiers is in the same range; perhaps, gallic acid produces the lower modifying layer thickness (model surfaces). Also, the flux reduction due to modification by ferulic acid is the highest among the three modifiers and this is due to large amount of material added. The reduction in the static water contact angle is better in case of 4-hydroxybenoic acid and ferulic acid than in the case of gallic acid. In general, the three modifiers are proposed to produce antifouling PES membranes, but a good modifier can be grown perpendicular on the membrane surface (to form brush-like oligomers/polymers). This is because good antifouling surfaces require both the steric hindrance of the added/grafted oligomers/polymers chains and the free polar groups to attract water and repulse the foulant molecules. 4-hydroxybenzoic acid and its similar structures are preferred for good foulant repellence. However, on the other hand, the addition/grafting of the both other modifiers (with more than two reactive legs) can be controlled to minimize the crosslinking and adsorption of the homopolymers formed inside the reaction medium. Moreover, ferulic acid showed good reduction in bacteria attachment as presented in previous work [33]. For that, the enzyme-catalyzed modification of PES membranes still needs further investigation to create novel antifouling or functionalized surfaces. For example, ferulic and 4-hydroxybenzoic acids can be used in combination, to collect the anti-biofouling properties of ferulic acid and the anti-protein fouling properties of 4-hydroxybenzoic acid. Also, further functionalization of the modification layer can be obtained by using modifiers that can subsequently react with other components, i.e., with phenolic amines [39]. Finally, I am confident to say that the enzyme-catalyzed modification method is considered as the nucleus of a new generation of antifouling membranes using other modifier types and/or other membrane materials.

The author thanks the team of Microscopy unit in the central labs in the Advanced Technology and New Materials Research Institute (ATNMRI), Alexandria, Egypt for performing SEM imaging and EDX analysis and thanks for center analysis unit in Cairo University, Egypt for SPM imaging. Also, many thanks for Dr. Marcel Giesbers (Wageningen University, NL) for performing XPS analysis. 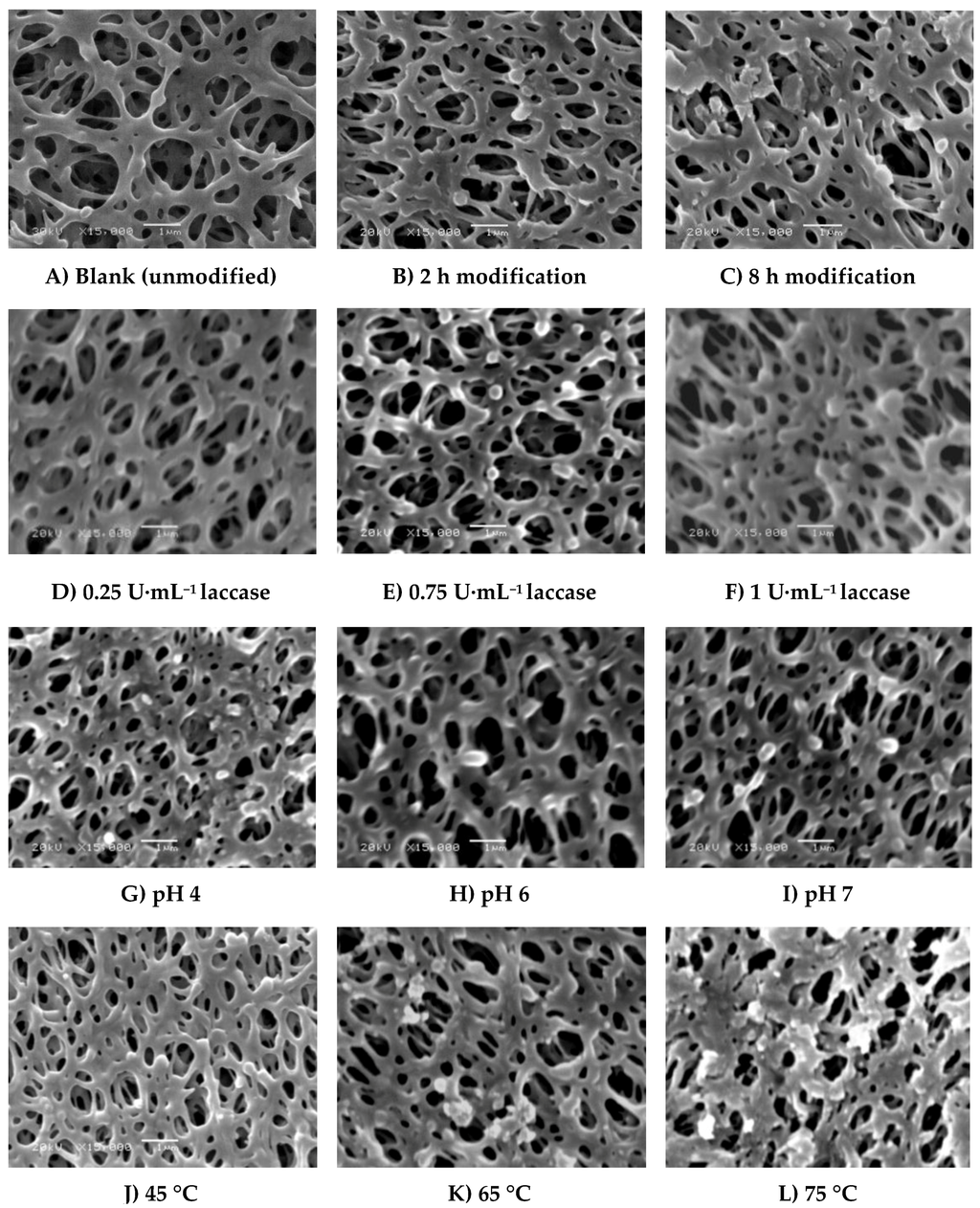