Computational Fluid Dynamics Modeling of the Resistivity and Power Density in Reverse Electrodialysis: A Parametric Study
Previous Article in Journal

Electrodialysis Applications in Wastewater Treatment for Environmental Protection and Resources Recovery: A Systematic Review on Progress and Perspectives

A thorough development of membrane devices has been done over the decades [1]. Of course, progress in separation through phase boundaries/interfaces has been accompanied by issues. The problem of ion transport across phase boundaries is one of the fundamental problems of physical chemistry and electrochemistry and is also important for membrane technologies. Studies [2,3,4,5,6,7] have shown the prospects of using intensive current modes.
The influence of space charge on the structure of the diffusion layer was first studied by Rubinstein and Shtilman [8]. Instead of the traditional equations of electroneutrality to the system of equations of the Nernst–Planck diffusion layer, the authors introduced the Poisson equation, and the ion-exchange membrane was taken as selective (the effective transport number of counterions was taken independent of current density). The problem was solved numerically. In the future, various mathematical methods and approaches to solving the Nernst–Planck–Poisson equations for electromembrane systems under extreme current conditions were developed [9,10,11,12,13,14].
The study of the non-stationary transfer of binary electrolyte in the diffusion layer is interesting because it allows us to determine the structure of the diffusion layer and its change over time, which is necessary, for example, for the asymptotic analysis of problems and the establishment of simple engineering calculation formulas for the dependence of the concentration distribution and electric field strength on the parameters of the problem. Research on non-stationary problems is limited to studies [15,16,17,18]. In these articles, the main attention is paid to the overlimiting potential dynamic mode and the analysis of the setting time depending on the parameters of the problem.
Studies [19,20] are devoted to the study of «shock electrodialysis», in which a deionization wave propagates through a microchannel or a porous medium with a sharp boundary between the concentrated and depleted zones. The deionization waves can be compared with the charge wave, since the deionization region actually coincides with the space charge region and a «powerful gradient» occurs in the desalination channel. Shock electrodialysis is a newly developed method for the desalination of water and deionization in micro-scale pores near an ion-selective element. In contrast to «shock electrodialysis», we study electro-membrane systems (the diffusion layer and the section of the desalination channel) with macroscale dimensions of the order of millimeters. In addition, it is shown that, in these systems, the interaction of charge waves is possible, up to their destruction (breakdown).

Two electromembrane systems will be considered below: The depleted diffusion layer at the cation-exchange membrane (CEM), then , the beginning of the diffusion layer, and is the conditional boundary of the solution/CEM. Additionally, the section of the desalination channel, in this case , is the conditional boundary of the anion-exchange membrane (AEM)/solution, and has the same meaning. The transfer of 1:1 salt ions in both cases is described by the same equations—the difference in the boundary conditions at . System of equations.
The non-stationary transport of salt ions for a 1:1 electrolyte is described by the following system of equations:
Here, (1) is the equation of material balance, (2) is the equation the Nernst–Planck for fluxes of sodium and chloride ions, the charge number of cations and anions , (3) is a Poisson equation for the electric field potential, (4) is the equation of the current flow, which means that the current flowing through the diffusion layer is determined by the flow of ions, is the dielectric permeability of the solution, is the Faraday number, is the universal gas constant, is the potential, is the electric field intensity, and , , are concentration, flux, the diffusion coefficient of the i-th ion, and current density determined by the flux of ions, respectively.
Boundary conditions for the diffusion layer.
The boundary conditions for a diffusion layer consist of the following boundary and initial conditions: where is the potential jump. As a rule, is either constant, or , where is the growth rate of the potential jump and has the dimension V/s.
Boundary conditions for the desalination channel.
To model the ion transport, replace the boundary condition (5) with the following:

When the current passes through the membrane, the concentration of cations decreases and reaches its minimum at the left border of the border layer. When using overlimiting current densities, this minimum is preserved, but the minimum value is greatly reduced, and there are practically no anions in the area of the minimum point. The size of the space charge is almost completely determined by the concentration of cations (Figure 1b). Therefore, the space charge also has a local minimum other than zero at this point. The minimum value depends on the applied potential jump (or on the current that is passed through the system). On the other hand, in the depth of the solution, where the condition of electroneutrality is met, the value of the space charge is almost zero. Therefore, the value of the space charge must have a local maximum between them (Figure 1a). In [9,12], it is shown that ; therefore, is the region of electroneutrality, and is the extended space charge region (SCR). In addition, in the field of electroneutrality, a balance is observed between the processes of diffusion and electromigration, and the currents of diffusion and electromigration (ohmic) are equal. At the same time, in the SCR, the electromigration is an order of magnitude greater than the diffusion one. Thus, the current pattern changes at the local maximum point.
Using the above assumptions, you can analytically determine the solution in the extended SCR. Indeed, we put in the system of equations , , , then we get:
From Equation (7), we get:
Multiply Equation (9) by , then, taking into account equation (8), we have: or where is the integration constant. From (8) and (10), we have: or
From this formula, it can be seen that monotonously decreases in in the extended SCR and reaches a minimum on its right border. In addition, as the current density increases, the minimum value decreases, which coincides with the numerical solution.
In order to understand the role and significance of the occurrence and growth of a local maximum, it is necessary to study its dependence on the input parameters of the problem, such as the initial and boundary concentrations, the rate of growth of the potential jump, the composition of the electrolyte solution, etc.

3.2. Dependence of the Local Maximum in the Diffusion Layer on the Boundary Concentration of

3.3. Soliton-like Charge Wave. Dependence of the Local Maximum (Minimum) Charge on the Growth Rate of the Potential Jump

Consider a non-stationary model of transport in the diffusion layer of the CEM (1–5) with a linear growth of the potential jump .
The calculations are at times greater than a certain critical , at which point the potential jump corresponds to the limiting current density and a local maximum of the space charge appears as a single soliton-like wave begins to move into the depth of the solution. Unlike true solitons, this wave has a charge. In addition, it changes its size and shape.
With a decrease in the growth rate of the potential jump , the space charge wave becomes less pronounced, but remains.

3.4. Dependence of Charge Waves on the Cation Diffusion Coefficient

3.4.2. Section of the Desalination Channel

Let us analyze the issue (1–4), (6). In the section of the desalination channel, the situation is completely different. First, the space charge of AEM has a negative value, so we must talk about the local minimum (or the local maximum of the absolute value of the charge). However, this is an insignificant clarification. Secondly, the space charge waves of different signs begin to interact, which leads to a new effect, namely the effect of the breakdown of the space charge.
Let us first consider the behavior of the local maximum in the KCl solution at d = 0.1. As can be seen from Figure 4a–f, two symmetrical soliton-like lone waves are formed, which move towards each other. Unlike real solitons, these waves have, as noted above, charges, the left wave negative charges and the right positive charges. At first, they practically do not interact, but as they approach each other they begin to attract and their speed of convergence increases and at the moment before contact there is a practical instantaneous breakdown, and they are discharged. A further increase in the potential jump does not lead to the formation of a new wave of local maximum, since the concentration of the solution practically becomes zero (Figure 4f–h), with the exception of narrow border layers in AEM and CEM, due to the fact that the concentration of anions and cations is maintained constant at the boundaries of AEM/solution and solution/CEM. As the potential jump increases, the width of the border layers decreases very slowly. A similar scenario is realized for the NaCl solution, except that the local minimum of negative space charge is generated much later (Figure 4f) than for the KCl solution. This is due to the fact that the current density in the first case is greater than in the second.
At in NaCl, a single wave occurs in the CEM, which reaches the region of negative space charge in the AEM, where there is no local minimum and maximum, and is discharged at . In KCl, two almost symmetrical waves are formed, one in the CEM and the other in the AEM, which meet almost in the middle and discharge at . Thus, the behavior of charge waves at in NaCl and KCl solutions is completely different.

3.5. Dependence of Charge Waves on the Initial Concentration of

The comparison of space charge graphs for and for (see Figure 4a and Figure 5a) at shows that the less concentrated solution is desalinated faster and the charge waves are already very different, and, at (Figure 5b), the charge waves for KCl began to discharge.

In this paper, the reasons for the formation and properties of the local maximum (minimum) space charge in membrane systems when using overlimiting current conditions are investigated. The depleted diffusion layer at the cation-exchange membrane and the section of the desalination channel are considered as membrane systems. It is shown that the local maximum and minimum of space charge appear due to the limited capacity of ion-exchange membranes at a given potential jump. It is shown that the local maximum of the space charge in the diffusion layer moves as a single soliton-like wave into the depth of the solution, slowly changing its size and shape. In the section of the desalination channel, the space charge waves of different signs begin to interact, which leads to a new effect, namely the effect of discharge (breakdown) of the space charge. The fundamental laws of this phenomenon are studied.

This research was funded by Russian Foundation for Basic Research project number 20-58-12018 NNIO_a: The influence of electroconvection, water dissociation, and geometry of spacers on electrodialysis desalination in intensive current regimes.

The study was carried out with the financial support of the Russian Foundation for Basic Research grant number 20-58-12018 NNIO_a: The influence of electroconvection, water dissociation, and geometry of spacers on electrodialysis desalination in intensive current regimes. 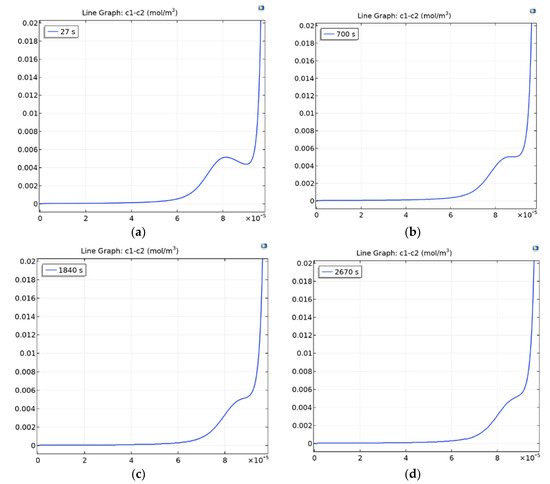 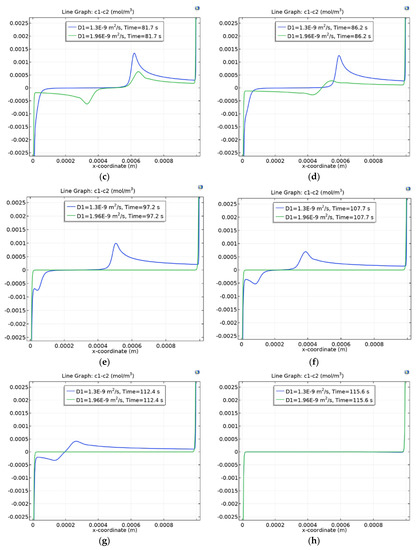 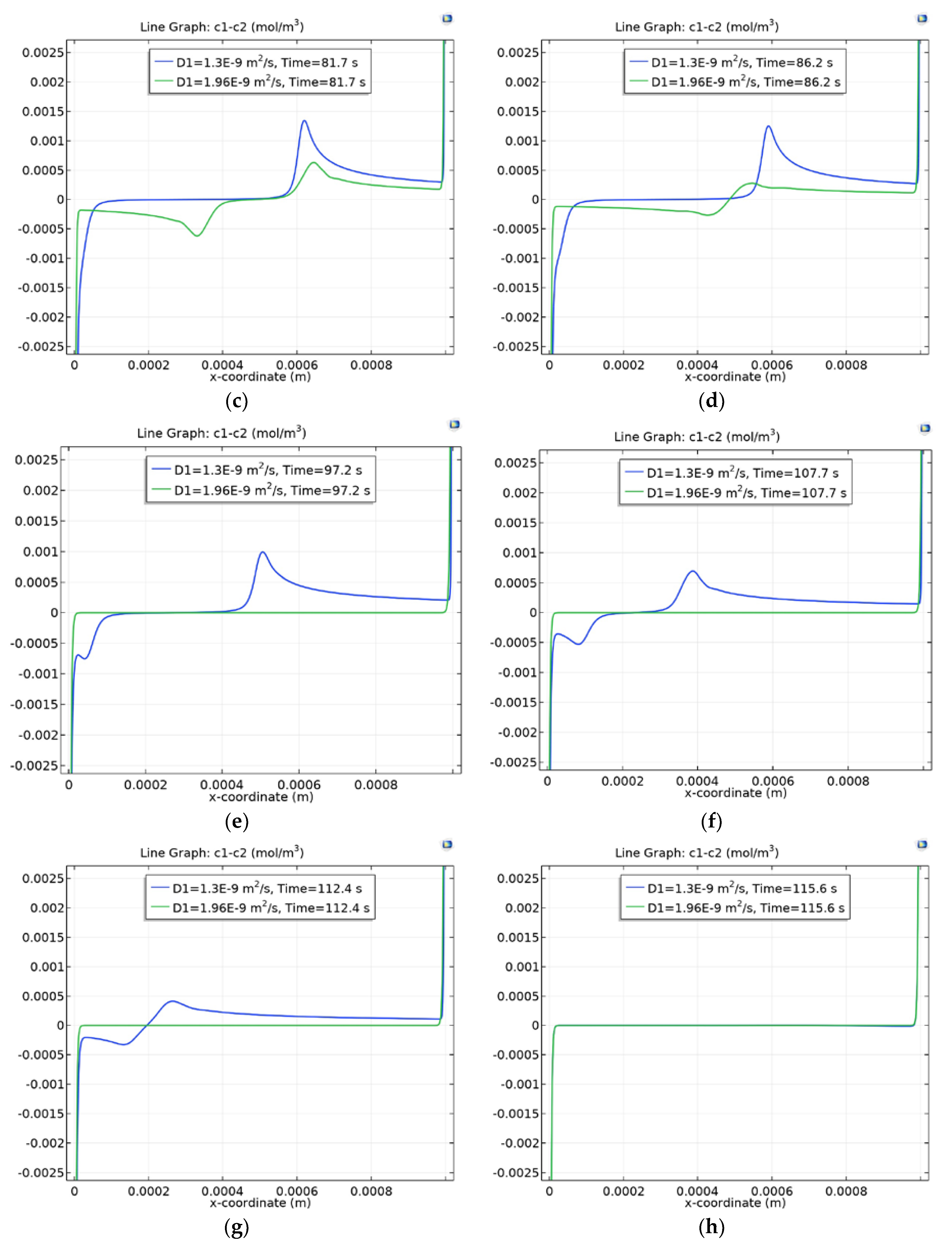