COVID-19 Vaccine Acceptability and Its Determinants in Mozambique: An Online Survey
Next Article in Special Issue

Acceptance of COVID-19 Vaccination in Cancer Patients in Hong Kong: Approaches to Improve the Vaccination Rate

A Glimpse into the Diverse Cellular Immunity against SARS-CoV-2

Severe acute respiratory syndrome coronavirus 2 (SARS-CoV-2)-specific cellular immune response has been shown to play a critical role in preventing severe illness or death in patients infected with SARS-CoV-2 or its variants. Given the multiple T-cell epitopes shared by wild-type virus and its variants, we hypothesized that vaccines that target multiple T-cell epitopes of SARS-CoV-2 may provide a “universal protection” against the wild-type virus as well as its variants, even the heavily mutated ones. To test this, we assessed SARS-CoV-2-specific T-cell precursors in healthy individuals using overlapping peptide pools of SARS-CoV-2 structural and functional proteins, including spike (S), membrane (M), envelope (E), nucleocapsid (N), and protease (P) proteins as target antigens. Diverse T-cell precursor frequencies specific to these viral antigens were detected in healthy individuals, including high, medium, low, and no responders. This was further confirmed by efficient induction of anti-SARS-CoV-2 T-cell immune responses using ex vivo dendritic cell (DC)/T cell coculture. The results demonstrated T-cell responses consistent with the precursor frequencies of each of the individuals tested. Importantly, the combination of all five viral peptide pools induced the strongest cellular immune response, and further, after a DC-peptides re-stimulation, even the no responders developed an increased anti-viral T-cell response. These analyses recapitulate the presence of a broad anti-SARS-CoV-2 cellular immunity even in an immune naïve population, which could be enhanced by antigen presenting cells presenting the overlapping antigenic peptides. Given the critical role of cellular immunity in COVID-19 protection, these results have important implications for vaccine design and immunotherapy in fighting SARS-CoV-2 and its variants. View Full-Text
Keywords: COVID-19; SARS-CoV-2; cellular immunity; vaccine COVID-19; SARS-CoV-2; cellular immunity; vaccine
►▼ Show Figures 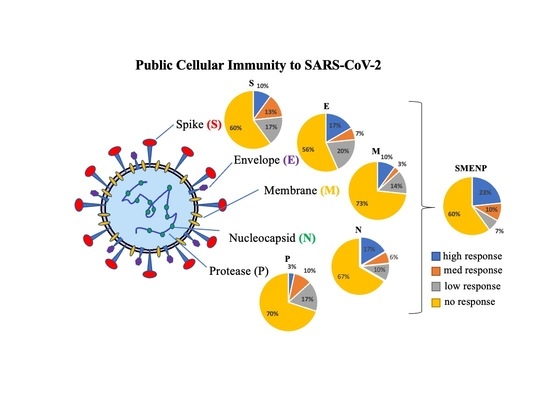 Lung-Ji Chang
Lung-Ji Chang, President of Shenzhen Geno-immune Medical Institute (GIMI), Shenzhen, China, a tenured Full Professor in University of Florida College of Medicine, Gainesville, Florida, USA, obtained a doctorate (Ph.D.) in Microbiology from the University of Iowa, Iowa City, USA and has published more than 150 scientific publications and filed more than 30 patents. Dr. Chang develops novel molecular and gene therapy tools and participates in individualized treatments in multiple clinical trials applying gene and cell based therapeutics. Dr. Chang’s research goals are using innovative approaches to translate basic science into clinical treatment.
Zoom | Orient | As Lines | As Sticks | As Cartoon | As Surface | Previous Scene | Next Scene
We use cookies on our website to ensure you get the best experience. Read more about our cookies here.
Accept
We have just recently launched a new version of our website. Help us to further improve by taking part in this short 5 minute survey here. here.
Never show this again