Immunogenicity and Antiviral Response of Therapeutic Hepatitis B Vaccination in a Mouse Model of HBeAg-Negative, Persistent HBV Infection
Previous Article in Special Issue

A Glimpse into the Diverse Cellular Immunity against SARS-CoV-2

:
We report the case of a patient who developed antineutrophil cytoplasmic antibody (ANCA)-associated vasculitis (AAV) after receiving the coronavirus disease 2019 (COVID-19) vaccine BNT162b (Pfizer–BioNTech). A 37-year-old Japanese woman had been taking propylthiouracil for Graves’ disease. She had erythema on her forearm on the 12th day after receiving the first dose of the vaccine, fever on the 13th day, and redness and swelling of her left auricle on the 25th day. Her serum myeloperoxidase-ANCA and proteinase 3-ANCA levels, which were negative before the Graves’ disease treatment, were elevated. She had unilateral auricular symptoms but no other typical relapsing polychondritis findings. She was diagnosed with propylthiouracil-induced AAV. She was treated with oral glucocorticoids, and her symptoms improved. Propylthiouracil is considered to be the main cause of the onset of AAV in this case, but it cannot be ruled out that BNT162b may have had some effect on the onset of the disease. Although the development of propylthiouracil-induced AAV in this case may have been incidental and unrelated to the vaccination, this report provides important data for evaluating the safety of the vaccine.
Keywords:
propylthiouracil; ANCA-associated vasculitis; relapsing polychondritis; COVID-19 vaccine

Coronavirus disease 2019 (COVID-19), caused by severe acute respiratory syndrome coronavirus 2 (SARS-CoV-2) and first detected in the city of Wuhan in China’s Hubei Province, has become a global pandemic. To date, more than 178 million people have been infected with SARS-CoV-2, 3.8 million of whom have died, and these numbers continue to grow [1]. Vaccines for COVID-19 are critical tools for controlling the pandemic. In early December 2020, the Pfizer–BioNTech mRNA COVID-19 vaccine BNT162b2 received a temporary emergency use authorization in the United Kingdom, followed by a series of approvals or authorizations for emergency use in Bahrain, Canada, Mexico, Saudi Arabia, and the United States [2]. In Japan, BNT162b2 received a special approval for emergency use on 14 February 2021 [2]. The BNT162b2 mRNA vaccine is a lipid nanoparticle-formulated, nucleoside-modified RNA that encodes the SARS-CoV-2 spike, modified by two proline mutations to lock it in the prefusion conformation [3]. The BNT162b2 mRNA vaccine is administered intramuscularly (ideally into the deltoid area of the upper arm) in two 30 μg doses, 21 days apart [3]. In a phase 2/3 multinational randomized placebo-controlled efficacy clinical trial (NCT04368728), among 36,523 participants with no evidence of existing or prior SARS-CoV-2 infection, there were eight cases of COVID-19 with onset at ≥7 days after receiving the second dose of BNT162b2. In contrast, there were 162 cases of COVID-19 with onset at ≥7 days after receiving the second dose of placebo, corresponding to 95.0% vaccine efficacy (95% confidence interval, 90.3–97.6) [3]. The most frequent adverse effects reported after the administration of BNT162b2 were injection site pain, fever, fatigue, and headache, which occurred soon after vaccination and resolved shortly [3]. However, there is still a lack of data on the BNT162b2 mRNA vaccine for medium- to long-term safety, interaction with other drugs, and use in subjects with underlying medical conditions. Immune thrombocytopenia (ITP) after COVID-19 vaccination has been reported and is more common with the adenovirus vectored vaccine ChAdOx1 nCoV-19 (AstraZeneca) [4], but has also been reported with mRNA vaccines [5,6,7,8]. No other autoimmune diseases have been reported to be associated with mRNA COVID-19 vaccines. We report here the case of a patient who developed antineutrophil cytoplasmic antibody (ANCA)-associated vasculitis (AAV) after receiving the COVID-19 vaccine BNT162b.

A 37-year-old Japanese woman had been taking propylthiouracil for Graves’ disease for about 28 months. She received the Pfizer–BioNTech COVID-19 mRNA vaccine BNT162b through her employment as a care worker. A small, round, and slightly raised erythema appeared on the forearm and precordium of the patient on the 12th day after she received the first dose of the vaccine, and a fever in the 37 °C range appeared on the 13th day. She visited a nearby hospital, underwent a blood test, and was prescribed a topical steroid. On the 25th day, pain, redness, and swelling appeared in the left auricle. Blood test results showed elevated levels of myeloperoxidase (MPO)-ANCA and proteinase 3 (PR3)-ANCA, which were negative before the patient had received treatment for Graves’ disease, suggesting the presence of propylthiouracil-induced AAV. On the 26th day after the first dose, a biopsy of an erythema on the right forearm was performed, and propylthiouracil was discontinued. The biopsy results showed infiltrations of lymphocyte-dominated inflammatory cells around the capillaries in the dermis and subcutaneous fat, but no fibrinoid necrosis or leukocytoclastic vasculitis characteristic of AAV. The patient’s erythema was alleviated, but a low-grade fever and swelling of the left auricle persisted. She was treated with garenoxacin mesilate hydrate for 5 days, but her symptoms did not improve. She was referred to our hospital on the 34th day after her vaccination for further examination and treatment and was admitted on the 35th day.
On admission, erythema was found on her bilateral forearms (Figure 1A), forehead, and thighs. The left auricle was red and swollen with tenderness (Figure 1B). The laboratory findings on admission are shown in Table 1. There were no major abnormalities in the complete blood cell count or biochemical tests except for an elevated C-reactive protein (CRP) level of 10.16 mg/dL (reference value < 0.14 mg/dL). The CRP level is usually elevated after immunization, and this is also true for BNT162b, but this CRP level was remarkably high and persisted even though it had been a long time since the patient’s vaccination. Serums MPO-ANCA and PR3-ANCA were increased to 494 IU/mL (reference value < 3.4 IU/mL), and 28.3 IU/mL (reference value < 1.9 IU/mL), respectively, and there were no abnormalities in other measured autoantibody tests including antinuclear antibody. Urinalysis showed no proteinuria or hematuria suggesting the presence of nephritis. Computed tomography of the whole body showed no obvious abnormalities, including thickening and narrowing of the trachea and bronchi. On the third day after admission, the erythema had almost disappeared. The redness and swelling of the left auricle persisted, and on the sixth day after admission, a biopsy of the left auricular cartilage was performed to differentiate relapsing polychondritis (RP). There was a mild lymphocytic infiltration in the dermis, but no inflammation or destruction of cartilage, which are typical features of RP (Figure 1C). Based on the patient’s history and blood and pathology results, we made the diagnosis of propylthiouracil-induced AAV.
On the ninth day after admission, prednisolone 30 mg/day was commenced. Her CRP levels quickly fell within the reference range and her left auricular symptoms gradually resolved. On the 23rd day after admission, the dose of prednisolone was reduced to 20 mg/day. She was discharged on the 24th day after admission.

This is the first report of propylthiouracil-induced AAV developing after COVID-19 vaccination. Although the onset of disease may have been accidental and unrelated to the patient’s vaccination, this report is important for scrutinizing and evaluating the safety of the COVID-19 vaccine.

Writing—original draft preparation, S.O. and Y.H.; Writing—review and editing, M.S. All authors have read and agreed to the published version of the manuscript.

Due to the case report nature of the manuscript, no ethical approval was required.

Written informed consent was obtained from the patient for publication of this article. 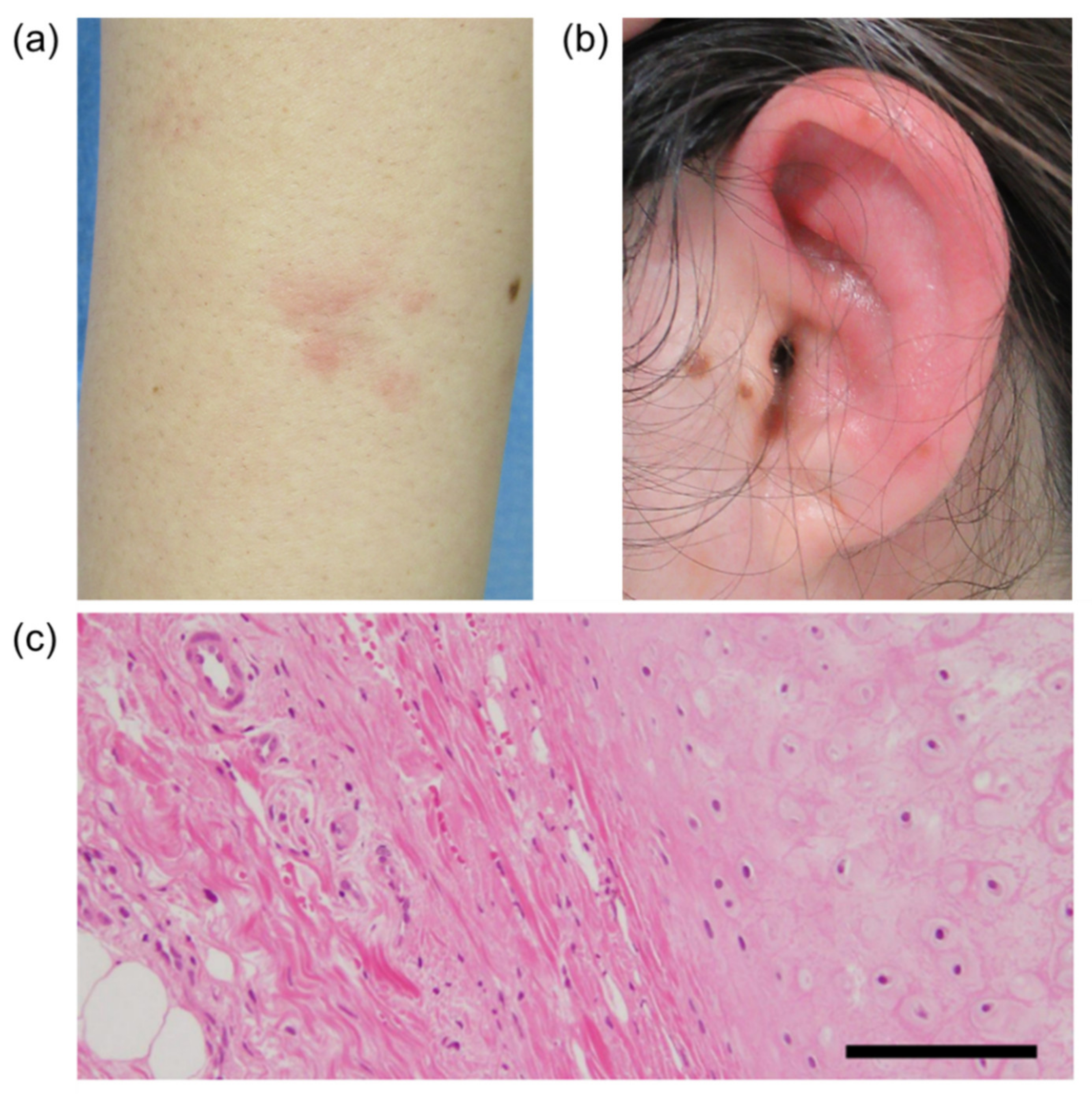