Despite the availability of anti-retroviral therapy, HIV-1 infection remains a massive burden on healthcare systems. Bacillus Calmette-Guérin (BCG), the only licensed vaccine against tuberculosis, confers protection against meningitis and miliary tuberculosis in infants. Recombinant BCG has been used as a vaccine vehicle to express both HIV-1 and Simian Immunodeficiemcy Virus (SIV) immunogens. In this study, we constructed an integrative E. coli-mycobacterial shuttle plasmid, p2auxo.HTI.int, expressing the HIVACAT T-cell immunogen (HTI). The plasmid was transformed into a lysine auxotrophic Mycobacterium bovis BCG strain (BCGΔLys) to generate the vaccine BCG.HTI2auxo.int. The DNA sequence coding for the HTI immunogen and HTI protein expression were confirmed, and working vaccine stocks were genetically and phenotypically characterized. We demonstrated that the vaccine was stable in vitro for 35 bacterial generations, and that when delivered in combination with chimpanzee adenovirus (ChAd)Ox1.HTI in adult BALB/c mice, it was well tolerated and induced HIV-1-specific T-cell responses. Specifically, priming with BCG.HTI2auxo.int doubled the magnitude of the T-cell response in comparison with ChAdOx1.HTI alone while maintaining its breadth. The use of integrative expression vectors and novel HIV-1 immunogens can aid in improving mycobacterial vaccine stability as well as specific immunogenicity. This vaccine candidate may be a useful tool in the development of an effective vaccine platform for priming protective responses against HIV-1/TB and other prevalent pediatric pathogens. View Full-Text
Keywords: BCG; HIV; vaccine; rBCG; HTI; T-cell BCG; HIV; vaccine; rBCG; HTI; T-cell
►▼ Show Figures 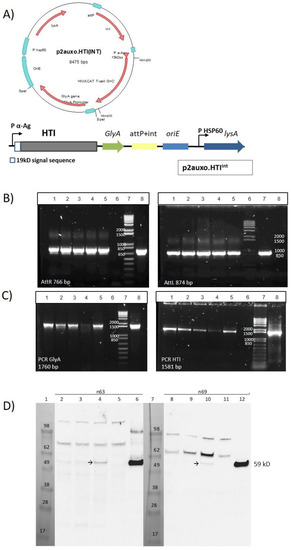