The Impact of Sugar-Sweetened Beverage Consumption on the Liver: A Proteomics-based Analysis
Previous Article in Special Issue

Parkinson’s disease (PD) is a neurodegenerative disorder caused by the depletion of dopaminergic neurons in the basal ganglia, the movement center of the brain. Approximately 60,000 people are diagnosed with PD in the United States each year. Although the direct cause of PD can vary, accumulation of oxidative stress-induced neuronal damage due to increased production of reactive oxygen species (ROS) or impaired intracellular antioxidant defenses invariably occurs at the cellular levels. Pharmaceuticals such as dopaminergic prodrugs and agonists can alleviate some of the symptoms of PD. Currently, however, there is no treatment to halt the progression of PD pathology. Due to the nature of PD, a long and progressive neurodegenerative process, strategies to prevent or delay PD pathology may be well suited to lifestyle changes like dietary modification with antioxidant-rich foods to improve intracellular redox homeostasis. In this review, we discuss cellular and genetic factors that increase oxidative stress in PD. We also discuss neuroprotective roles of dietary antioxidants including vitamin C, vitamin E, carotenoids, selenium, and polyphenols along with their potential mechanisms to alleviate PD pathology. View Full-Text
Keywords: antioxidant; mitochondria; neurodegeneration; nutrient; apoptosis antioxidant; mitochondria; neurodegeneration; nutrient; apoptosis
►▼ Show Figures 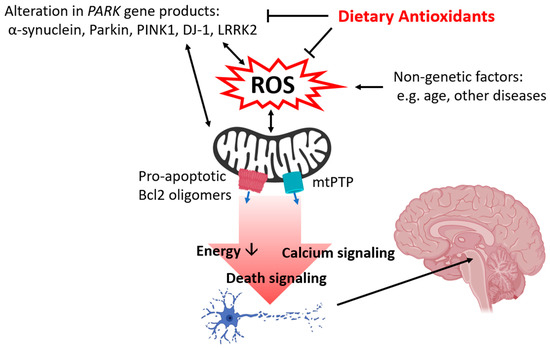