Correction of Experimental Retinal Ischemia by l-Isomer of Ethylmethylhydroxypyridine Malate

Inflammation has been reported to be intimately linked to the development or worsening of several non-infectious diseases. A number of chronic conditions such as cancer, diabetes, cardiovascular disorders, autoimmune diseases, and neurodegenerative disorders emerge as a result of tissue injury and genomic changes induced by constant low-grade inflammation in and around the affected tissue or organ. The existing therapies for most of these chronic conditions sometimes leave more debilitating effects than the disease itself, warranting the advent of safer, less toxic, and more cost-effective therapeutic alternatives for the patients. For centuries, flavonoids and their preparations have been used to treat various human illnesses, and their continual use has persevered throughout the ages. This review focuses on the anti-inflammatory actions of flavonoids against chronic illnesses such as cancer, diabetes, cardiovascular diseases, and neuroinflammation with a special focus on apigenin, a relatively less toxic and non-mutagenic flavonoid with remarkable pharmacodynamics. Additionally, inflammation in the central nervous system (CNS) due to diseases such as multiple sclerosis (MS) gives ready access to circulating lymphocytes, monocytes/macrophages, and dendritic cells (DCs), causing edema, further inflammation, and demyelination. As the dearth of safe anti-inflammatory therapies is dire in the case of CNS-related disorders, we reviewed the neuroprotective actions of apigenin and other flavonoids. Existing epidemiological and pre-clinical studies present considerable evidence in favor of developing apigenin as a natural alternative therapy against chronic inflammatory conditions. View Full-Text
Keywords: natural products; flavonoids; apigenin; dendritic cells; neuroinflammation; chronic inflammation natural products; flavonoids; apigenin; dendritic cells; neuroinflammation; chronic inflammation
►▼ Show Figures 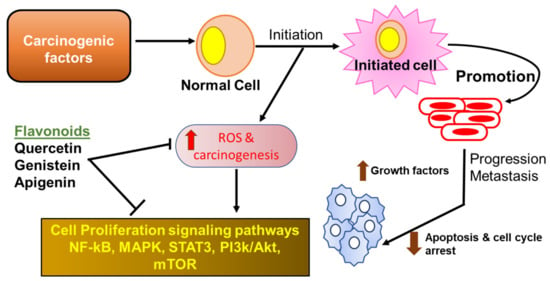