Antioxidant Activity of Spices and Their Impact on Human Health: A Review
Previous Article in Journal / Special Issue

Vitamin E and Alzheimer’s Disease—Is It Time for Personalized Medicine?

Recently there is a great interest in using high energy techniques (HET) which involve microwave or ultrasound-assisted extraction (MAE and UAE) for isolation of natural bioactive compounds from plant foods. Such bioactive compounds are phenolics which were determined from sunflower (Helianthus annuus L.) kernels and hulls (defatted) utilising two different high energy extraction techniques, ultrasound and microwave assisted solvent extraction. All samples were characterised by ultra-high-performance liquid chromatography-electrospray ionization-mass spectrometry (UHPLC-ESI-MS). The effect of parameters such as the nature of the solvent, volume of solvent, temperature and time is discussed. It is proved that the techniques applied had reduced solvent consumption and shorter extraction times, and extraction yields of the analytes were equal to or to some extent higher than those obtained with conventional techniques. Total Phenolic Composition (TPC) of samples examined was studied by the Folin-Ciocalteu method and results were presented in μg gallic acid equivalents (GAE)/g dry extract. Kernels proved to have the higher amount of TPC while the press residues had shown comparable TPC results. The antioxidant activity of samples was spectrophotometrically determined by 2,2-Diphenyl-1-Picrylhydrazyl (DPPH) assay using Butylated hydroxyl toluene (BHT) as reference compound to compare with samples. Sunflower seeds (kernels) showed again the highest antiradical efficiency (AE) compared to hulls and press-residue extract. Afterwards, ferric reducing ability of plasma (FRAP) and trolox equivalent antioxidant capacity (TEAC) assays were used for measuring the antioxidant capacity of samples. Press residue, a by-product of sunflower oil extraction, contained phenolics as shown by UHPLC-ESI-MS analysis. Hence, later on these compounds can be possibly utilised by food or neutraceutical industries. Phenolic substances characterised in hulls, kernels, and press residue were phenolic acids, mainly chlorogenic, caffeic, cinnamic, 4-hydroxybenzoic and p-coumaric. View Full-Text
Keywords: phenolic compounds; sunflower; antioxidant capacity; high energy techniques; UHPLC-ESI-MS phenolic compounds; sunflower; antioxidant capacity; high energy techniques; UHPLC-ESI-MS
►▼ Show Figures 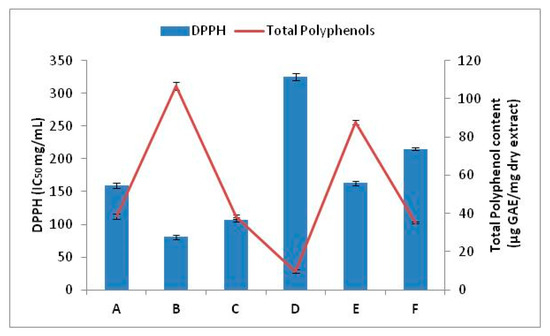