New treatments based on peripheral stimulation of the sensory-motor system have shown to be promising in rehabilitation strategies for patients with neurological disorders, including Parkinson’s disease (PD), especially in regards to reducing gait impairment, and hence, the incidence of falls. The aim of this study was to evaluate the change in several gait parameters measured by sensor inertial measurement in PD patients after acute plantar stimulation, under the distal phalanx of the big toe, and underneath the head of the first metatarsal joint of both feet, using a 3D printing insole. In order to assess whether the effects are selective for PD patients, we compared the effect of the treatment in a control group (age-matched) consisting of patients with other neurological disorders which also displayed gait and balance impairment, and a similar cognitive function, depressive symptoms, body mass index, and comorbidity burden observed in the PD group. Plantar foot stimulation in PD patients eliminated the significant (p < 0.05) alterations existing in stride asymmetry and in stride variability. When comparing the effects of post-plantar stimulation with the respective basal level, considered as 100% in both groups, we observed a significant (p = 0.019, Mann–Whitney test) increase in stride length compared to basal in the PD group and control group. No significant effects of foot plantar stimulation were observed in any of the gait parameters in the control group. Plantar foot stimulation has a positive effect on the step and stride length, and has a positive effect on walking stability, measured by the increase in stride length. No significant effect was observed on bradykinesia because it did not improve walking velocity. These findings indicate that foot plantar stimulation using a 3D printing insole seems to generate a more stable walking pattern in PD patients, with an interesting applicability, and a low-cost, for reducing gait impairment in PD patients. View Full-Text
Keywords: asymmetry; stride length; foot; rehabilitation; medical device; 3D printing; additive manufacturing asymmetry; stride length; foot; rehabilitation; medical device; 3D printing; additive manufacturing
►▼ Show Figures 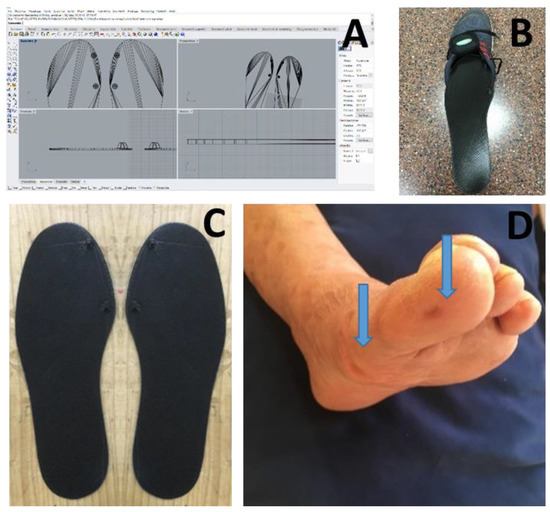