Colocalization of BRCA1 with Tau Aggregates in Human Tauopathies

The mechanism of neuronal dysfunction via tau aggregation in tauopathy patients is controversial. In Alzheimer’s disease (AD), we previously reported mislocalization of the DNA repair nuclear protein BRCA1, its coaggregation with tau, and the possible importance of the subsequent DNA repair dysfunction. However, whether this dysfunction in BRCA1 also occurs in other tauopathies is unknown. The aim of this study was to evaluate whether BRCA1 colocalizes with tau aggregates in the cytoplasm in the brains of the patients with tauopathy. We evaluated four AD, two Pick’s disease (PiD), three progressive supranuclear palsy (PSP), three corticobasal degeneration (CBD), four normal control, and four disease control autopsy brains. Immunohistochemistry was performed using antibodies against BRCA1 and phosphorylated tau (AT8). Colocalization was confirmed by immunofluorescence double staining. Colocalization of BRCA1 with tau aggregates was observed in neurofibrillary tangles and neuropil threads in AD, pick bodies in PiD, and globose neurofibrillary tangles and glial coiled bodies in PSP. However, only partial colocalization was observed in tuft-shaped astrocytes in PSP, and no colocalization was observed in CBD. Mislocalization of BRCA1 was not observed in disease controls. BRCA1 was mislocalized to the cytoplasm and colocalized with tau aggregates in not only AD but also in PiD and PSP. Mislocalization of BRCA1 by tau aggregates may be involved in the pathogenesis of PiD and PSP. View Full-Text
Keywords: BRCA1; tau; protein aggregation; DNA repair; Pick’s disease; progressive supranuclear palsy; corticobasal degeneration; Alzheimer’s disease BRCA1; tau; protein aggregation; DNA repair; Pick’s disease; progressive supranuclear palsy; corticobasal degeneration; Alzheimer’s disease
►▼ Show Figures 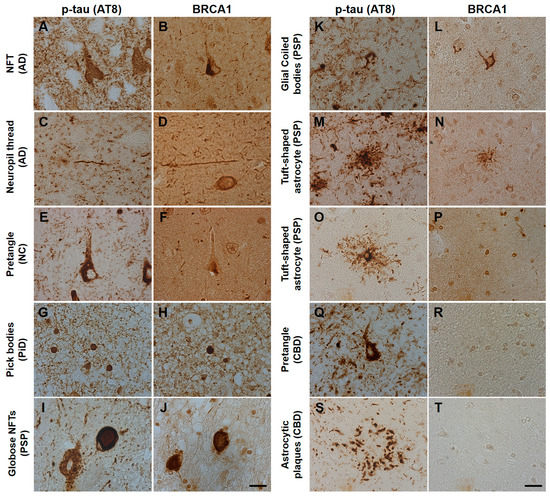