Migraine is the sixth most prevalent disease in the world and a substantial number of experiments have been conducted to analyze potential differences between the migraine brain and the healthy brain. Results from these investigations point to the possibility that development and aggravation of migraine may include grey matter plasticity. Nogo-type signaling is a potent plasticity regulating system in the CNS and consists of ligands, receptors, co-receptors and modulators with a dynamic age- and activity-related expression in cortical and subcortical regions. Here we investigated a potential link between migraine and five key Nogo-type signaling genes: RTN4, OMGP, MAG, RTN4R and LINGO1, by screening 15 single nucleotide polymorphisms (SNPs) within these genes. In a large Swedish migraine cohort (749 migraine patients and 4032 controls), using a logistic regression with sex as covariate, we found that there was no such association. In addition, a haplotype analysis was performed which revealed three haplotype blocks. These blocks had no significant association with migraine. However, to robustly conclude that Nogo-type genotypes signaling do not influence the prevalence of migraine, further studies are encouraged. View Full-Text
Keywords: headache; signaling; SNP; association study; grey matter headache; signaling; SNP; association study; grey matter
►▼ Show Figures 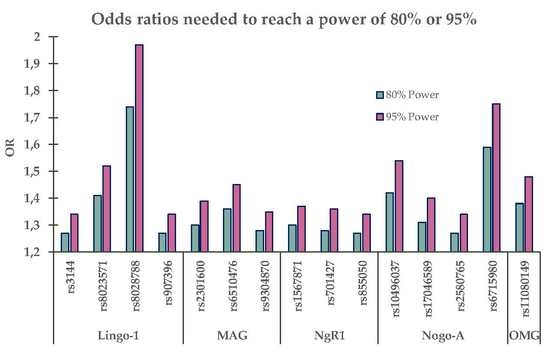