:
A phasor measurement unit (PMU) can provide phasor measurements to the distribution network to improve observability. Based on pre-configuration and existing measurements, a network compression method is proposed to reduce PMU candidate locations. Taking the minimum number of PMUs and the lowest state estimation error as the objective functions and taking full observability of distribution network as the constraint, a multi objective model of optimal PMU placement (OPP) is proposed. A hybrid state estimator based on supervisory control and data acquisition (SCADA) and PMU measurements is proposed. To reduce the number of PMUs required for full observability, SCADA measurement data are also considered into the constraint by update and equivalent. In addition, a non-dominated sorting genetic algorithm-II (NSGA-II) is applied to solve the model to get the Pareto set. Finally, the optimal solution is selected from the Pareto set by the technique for order preference by similarity to ideal solution (TOPSIS). The effectiveness of the proposed method is verified by IEEE standard bus systems.
Keywords:
phasor measurement unit; distribution network; compression; cost; state estimation error; supervisory control and data acquisition; multi objective model

Network compression includes two parts. On the one hand, some observable buses are merged with their neighbors by pre-configuring a part of PMUs; on the other hand, based on existing ZIB measurements, some buses which can become an observable bus are merged with their neighbors. Network compression can reduce the PMU candidate locations, increase network measurement redundancy and improve the optimization effect.

2.1. The Observability of Distribution Network

2.2. Network Compression Based on Pre-Configuration and Existing Measurements

When the distribution network has n buses, the PMU has n candidate locations. Based on the rules of observability, the bus which needs to be placed with PMU and the buses which do not need to be placed with PMU can be determined. Through pre-configuration, the bus which does not need to be placed with PMU is merged with its neighbor to reduce PMU candidate locations. The specific methods are as follows:
(1) Place a PMU on the neighbor of the leaf bus, and merge the leaf bus with its neighbor into a new bus.
The leaf bus is a bus which is only connected to one bus. The distribution network is radial, so it always has many leaf buses. When a PMU is installed on a leaf bus, the number of new observable buses is only two: leaf bus and its neighbor; when a PMU is placed on the bus which is connected to a leaf bus, more than two buses become observable buses.
Therefore, PMU is not placed on the leaf bus, PMU is placed on the bus which is connected to the leaf bus instead. Therefore, the leaf bus becomes an observable bus, which does not need to be considered in the process of OPP. The leaf bus can be merged with its neighbor. Network compression based on pre-configuration can reduce the number of buses in the network and improve network measurement redundancy when there are many leaf buses in the distribution network.
(2) Merge the ZIB with one of its neighbors while only two buses are connected to the ZIB.
For the ZIB which has only two neighbors: (a) if a PMU is placed on any one of the neighbors, both the ZIB and another neighbor become observable; (b) if all two neighbors of the ZIB are observable buses, the voltage phasor of the ZIB can be calculated by KCLs, so this ZIB is identified as an observable bus. Therefore, if the ZIB has only two neighbors, this ZIB does not need to be placed with a PMU and can be merged with one of the neighbors.
In summary, the network compression method provides a compressed network for the OPP model based on the pre-configuration and existing measurements.

3.1. The Basic Model of State Estimation

Considering the cost and accuracy of state estimation, a new multi-objective model of optimal PMU placement is presented. The objective functions are to minimize the number of PMUs and minimize the error of state estimation simultaneously, and the constraint is to ensure the distribution network is observable. On the basis of minimizing the number of PMUs required and the state estimation error, the solution with the largest measurement redundancy is obtained by modifying the objective function, so as to deal with the problem of data loss caused by communication problems. In addition, SCADA measurements are also applied to reduce the number of PMUs required for the full observability.

Assuming that a ZIB is connected to buses, and any of these buses are observable, the voltage phasor of us can be calculated by KCLs. In other words, bus is also observable. If a ZIB is connected to two buses, this ZIB can be merged with one of its neighbors. When the network has some ZIBs which have more than two neighbors individually, the Equation (19) can be updated to Equation (22): where is the ZIB measurement vector, which represents whether ZIB and its neighbor can be observed by the characteristic of ZIB, its entry can be defined as Equation (23): where can be calculated as Equation (24): where bus is a ZIB, from bus to bus are its neighbors.

To sum up, the multi-objective model of OPP considering cost and state estimation accuracy can be expressed as Equation (29):

5. Solution Methodology Based on NSGA-II and TOPSIS

The proposed OPP model is nonlinear because SCADA measurements and ZIBs are introduced into the problem. The multi-objective model is usually transformed into a single-objective model by unifying the dimensions and setting the corresponding weights [44]. However, the selection of weight requires prior knowledge which has strong subjectivity. Therefore, the non-dominated sorting genetic algorithm-II (NSGA-II) is employed to perform the optimization and get the Pareto optimal solution set in this paper.
To minimize the number of PMUs required and state estimation error comprehensively, the compromise solution is selected by TOPSIS [45]. If the installation cost is limited, the solution with the minimum number of PMUs in the Pareto set is selected as the optimal solution.

5.1.1. Initialization Based on Network Compression

5.1.3. Genetic Operations Based on Pre-Configuration

The steps of applying the above NSGA-II to solve the proposed OPP model are as follows:
(1) Input the information of distribution network: the connectivity matrix A, locations of ZIBs, SCADA measurements and so on;
(2) Compress the network and rearrange bus number;
(3) Create the initial population which has individuals and choose this population as the parent population;
(4) Set the total number of iterations and set iteration number as ;
(5) Perform crossover operation and mutation operation to generate the offspring population, and merge the offspring population with the parent population;
(6) Calculate the rank and crowding distance of each individual;
(7) Select individuals according to the rank and crowding distance to generate the parent population, and set ;
(8) Whether the maximum number of iterations is reached? Yes, end; No, go to step (5).

5.2. Selection Based on TOPSIS

X.K. and Y.W. conceived the idea of the study and conducted the research. Y.W. analyzed most of the data and wrote the initial draft of the paper. X.Y. and L.Y. contributed to finalizing this paper. 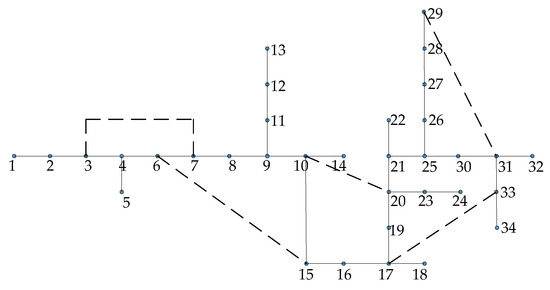 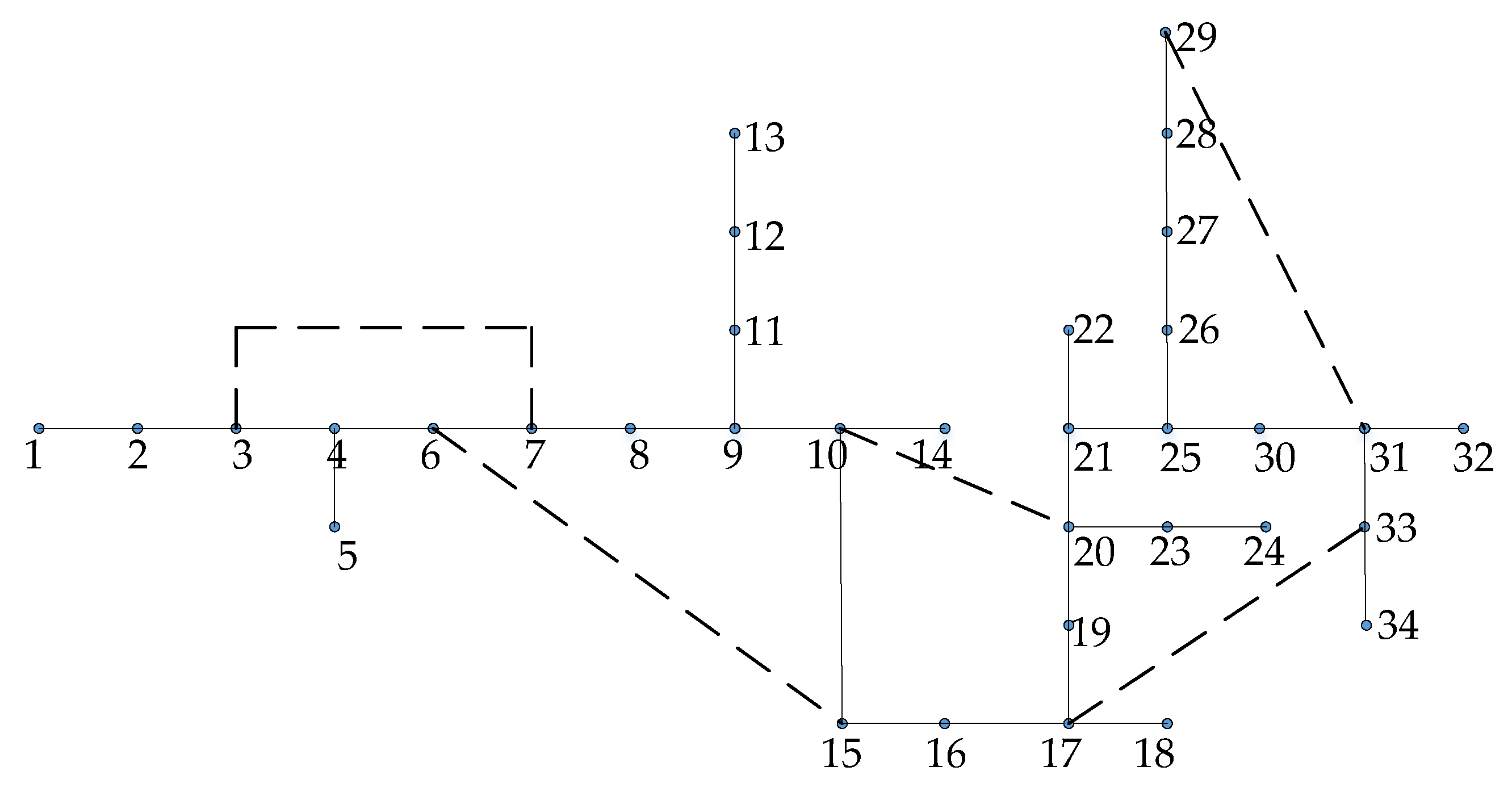 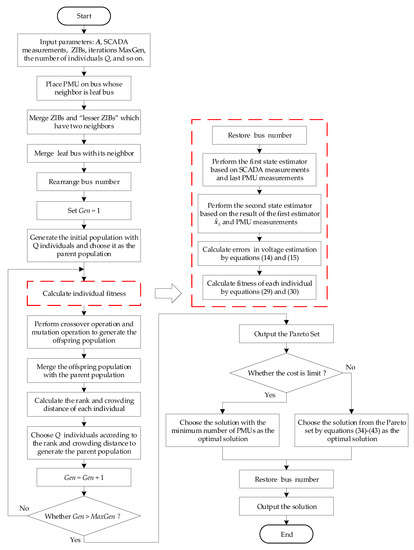 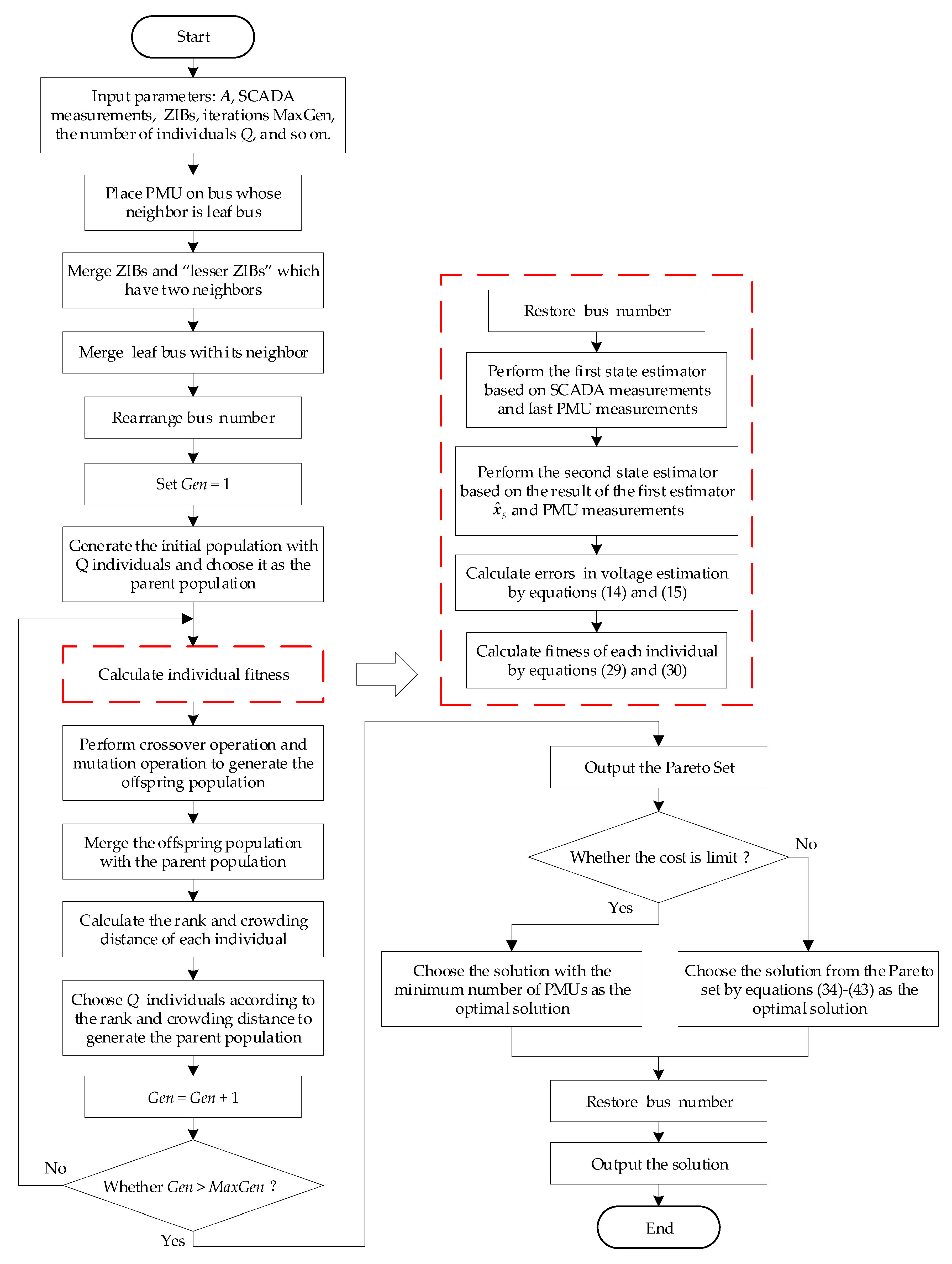 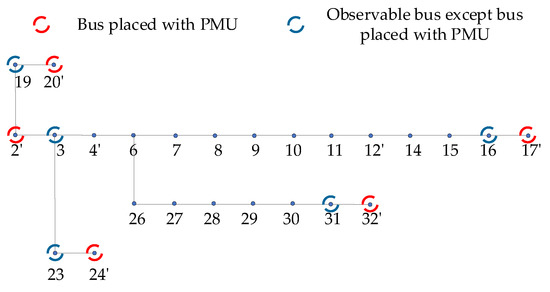 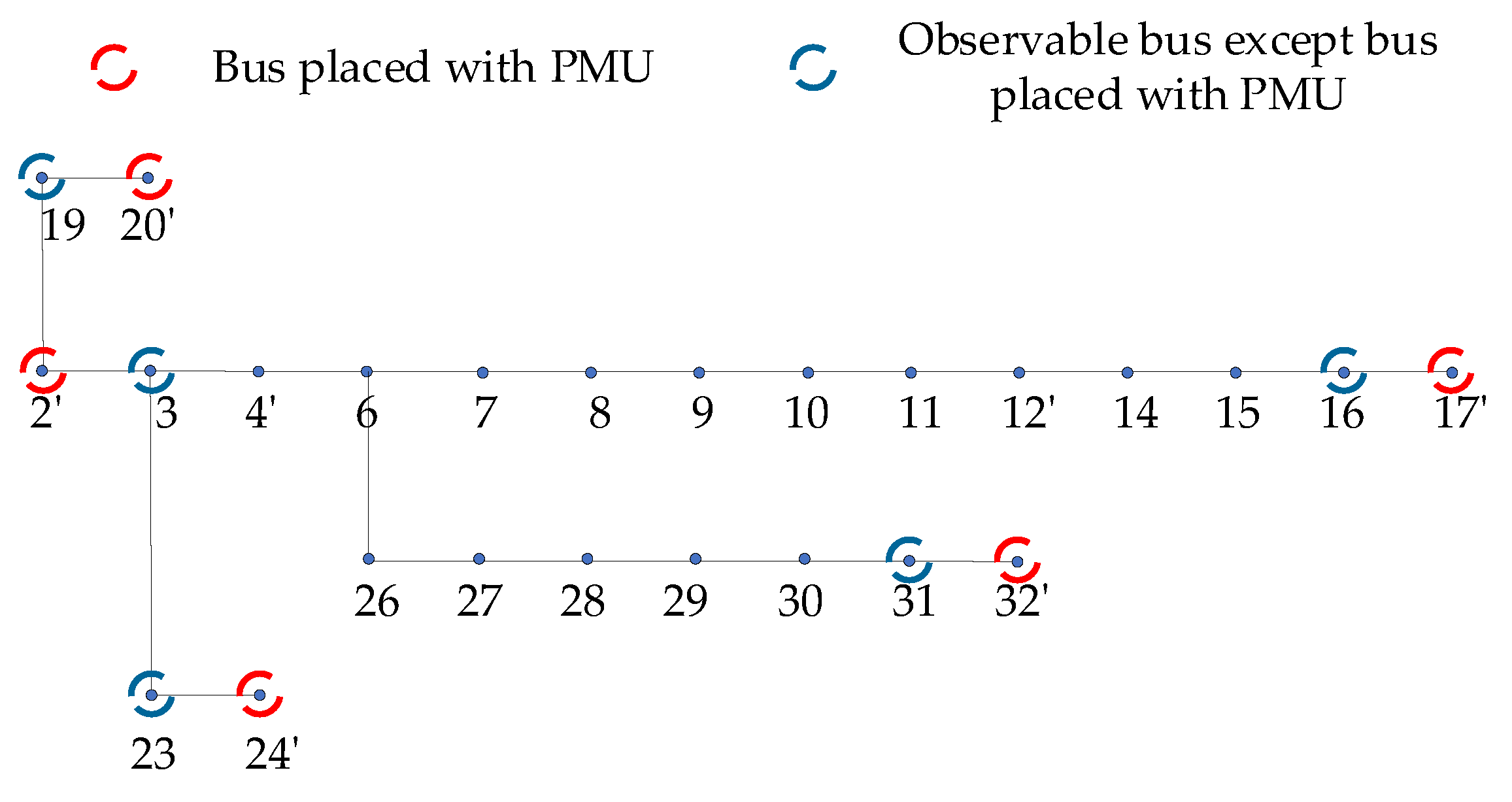