A Data-Driven Game Theoretic Strategy for Developers in Software Crowdsourcing: A Case Study
Next Article in Special Issue

Novel nanomaterials, including metallic nanoparticles obtained via green synthesis (gNPs), have a great potential for application in biotechnology, industry and medicine. The special role of gNPs is related to antibacterial agents, fluorescent markers and carriers for drug delivery. However, application of gNPs for construction of amperometric biosensors (ABSs) is not well documented. The aim of the current research was to study potential advantages of using gNPs in biosensorics. The extracellular metabolites of the yeast Ogataea polymorpha were used as reducing agents for obtaining gNPs from the corresponding inorganic ions. Several gNPs were synthesized, characterized and tested as enzyme carriers on the surface of graphite electrodes (GEs). The most effective were Pd-based gNPs (gPdNPs), and these were studied further and applied for construction of laccase- and alcohol oxidase (AO)-based ABSs. AO/GE, AO-gPdNPs/GE, laccase/GE and laccase-gPdNPs/GE were obtained, and their analytical characteristics were studied. Both gPdNPs-modified ABSs were found to have broader linear ranges and higher storage stabilities than control electrodes, although they are less sensitive toward corresponding substrates. We thus conclude that gPdNPs may be promising for construction of ABSs for enzymes with very high affinities to their substrates. View Full-Text
Keywords: green synthesis; metallic nanoparticles; extracellular metabolites; yeast Ogataea polymorpha; laccase; alcohol oxidase; amperometric biosensors green synthesis; metallic nanoparticles; extracellular metabolites; yeast Ogataea polymorpha; laccase; alcohol oxidase; amperometric biosensors
►▼ Show Figures 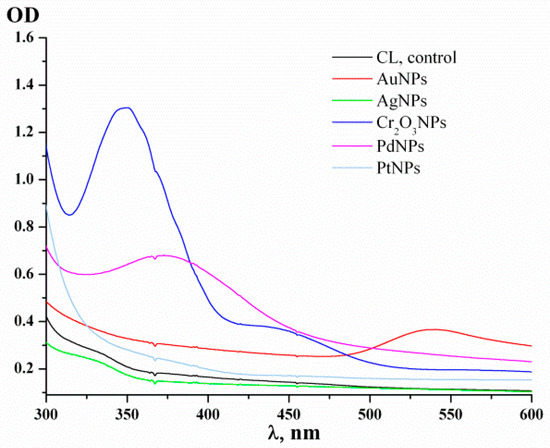