Increasing the Reliability of Flood Embankments with Neural Imaging Method

Biodegradable magnesium (Mg) alloys are becoming key materials for biomedical orthopedic applications because of their light weight and high strength md [1]. Mg alloys’ density of 1.7 g/cm3 to 2.0 g/cm3 is close to the natural bone density which ranges from 1.8 to 2.1 g/cm3 [2]. The stiffness modulus of pure magnesium is 45 GPa, which is in the range of human bone modulus of elasticity (40 to 57 GPa) [3,4]. The similarity in mechanical properties of magnesium with natural bone makes it an excellent candidate for biomedical applications for developing biodegradable orthopedic medical devices [1]. However, the high corrosion rate of Mg alloys limits its orthopedic applications. Zinc (Zn) has been used to alloy Mg (Mg–Zn alloy) to improve the corrosion resistance [5]. Zn also was alloyed with Mg to Zn–Mg alloy showing homogenous microstructure, slowly uniform degradation, improved mechanical properties, and good biocompatibility [6]. Zn–Mg alloy was believed to be an excellent candidate material for the application of load-bearing biodegradable implant [6]. Biodegradable alloys have been studied in various physiological environments to understand the corrosion behavior of these biomaterials [1,5,6,7,8,9,10,11,12,13,14,15,16,17,18]. Corrosion rate is one of the most studied properties of biodegradable alloys due to the importance of describing the corrosion behavior quantitatively in wide-ranging application environments.
Volume loss, mass loss, and hydrogen evolution have been used to determine corrosion rate of biodegradable alloys in in vitro tests; though these methods often give different rates [19]. There are discrepancies between degradation rate of magnesium in vitro tests, weight loss, and evolution of hydrogen gas, as compared to in vivo studies in orthopedics applications [20,21]. Corrosion rate of Mg–Gd–Zn alloys calculated by mass loss was lower than that calculated by hydrogen evolution from a eudiometer [22]. The corrosion rates obtained from the mass loss measurements were presumably because it is difficult to remove the corrosion products completely after these samples corroded severely in the long immersion test [22]. Corrosion rates of magnesium and its alloys in vitro is studied extensively to find a relationship on the weight loss to evolution of hydrogen gas after immersion testing [7,18,23]. However, accumulation of non-soluble products on the samples during immersion time makes weight loss not viable to accurately determine degradation [24]. The tendency of the corrosion rates obtained from in vitro corrosion tests calculated by mass loss were in the opposite direction as those obtained from the in vivo study measured by volume loss [25]. Methodology to evaluate the corrosion rates in vitro and in vivo has been reviewed, in which mass loss was used in an in vitro immersion test [26,27] and strictly speaking not an in vivo method [28]. Volume loss to calculate corrosion rate has been used in studies in vivo [26,29] as well as ex vivo and in vitro [30,31].
In this study, mass loss, volume loss, and hydrogen evolution were used to calculate corrosion rate of four Mg-based alloys, pure Mg and Zn. The approach of this research effort used eudiometric set ups to immerse biodegradable samples, and then conducted measurement of volume of hydrogen gas evolution every 48 h up to 14 days. The weight loss by a scale and volume loss by Micro-computed tomography (micro-CT) measurements were collected after 30 days’ immersion in the eudiometer chambers. Corrosion rates of tested biodegradable samples calculated by hydrogen evolution, mass loss, and volume loss were compared statistically.

The experiments to analyze corrosion rates were conducted based on the ASTM in vitro testing standard (ASTM-G31-72 [32]). Pure Zn, Mg and Mg alloys were scanned by micro-computed tomography (micro-CT, GE Phoenix Nanotom-M™, GE Sensing & Inspection Technologies GmbH, Boston, MA, USA). The materials were scanned at 6.7 μm voxel resolution with X-ray emission parameters 110 kV, 90 μA. Each rotational position 2D X-ray was collected from averaging 3 images. The volumes were reconstructed using Phoenix datos|x software. The volume of residual samples was calculated using VG Studio Max software (v 2.1). The micro-CT images before and after removing corrosion product (Figure 3) were used in the software to calculate the volume loss.
Calculated change in volume used numerically to compute the volume loss. The empirical equation for corrosion rates determination from volume change of individual samples [25] is given as: where:
CR: Corrosion rate (mm/year);
ΔV: reduction in volume that is equal to the remaining implant volume subtracted from the initial implant volume (mm3);
A: the initial surface area exposed to corrosion (mm2);
t: immersion time (year).
The mass loss obtained from by subtracting the corroded mass (mass without corrosion products) from the original mass of degradable samples. The corrosion rate unit used here chosen to be consistent with the literature in this dissertation. The empirical equation used to compute corrosion rate of magnesium by mass loss as the following formula [33]: where:
CR: Corrosion rate (mm/year);
K: the constant, 8.76 × 104;
ΔW: weight loss, which is calculated by reduction of corrosion products-removed remaining mass from initial mass (mg);
D: density of alloy (g/cm3);
A: the initial surface area exposed to corrosion (cm2);
t: immersion time (hour).

The volume of hydrogen evolution from Mg and its alloys in HBSS in the eudiometer system was measured every 48 h (Figure 4). All samples were observed to have a burst of corrosion initially as measured by the relatively high volumes at day 2. Pure Zn had the lower initial corrosion rate than other alloys (p < 0.05). Evolution of hydrogen gas became steady after the 4th day of immersion time. Mg alloy, 59B, released significant hydrogen volume during immersion compared with other alloys (p < 0.05).

Corrosion rates calculated by mass loss, volume loss, and hydrogen evolution volume are selected according to the experimental design. Mass loss and volume loss provided consistent corrosion rate and are recommended to be used in experiments with few time points to minimize the damage during the measuring process. Eudiometer can provide better real-time measurement of alloys’ corrosion rates according to hydrogen volume evolution. Eudiometer allows the access of measurement without touching the samples, which is not accessible by mass loss and volume loss. 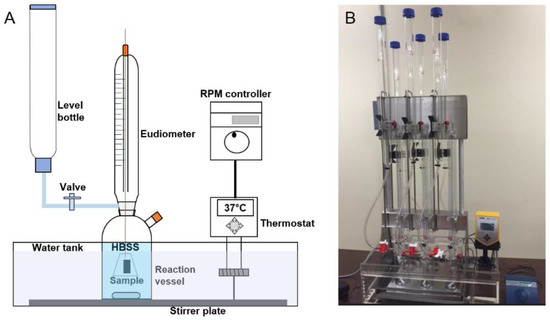 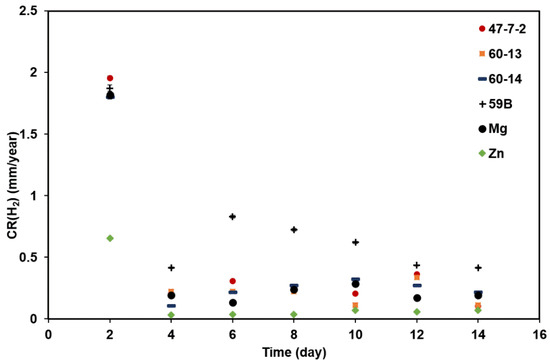 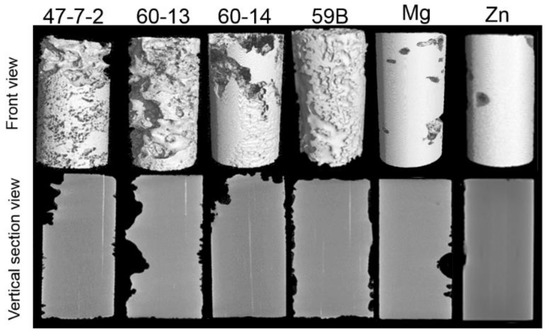 Table 1. Mechanical composition of tested alloys.
Table 1. Mechanical composition of tested alloys.
© 2018 by the authors. Licensee MDPI, Basel, Switzerland. This article is an open access article distributed under the terms and conditions of the Creative Commons Attribution (CC BY) license (http://creativecommons.org/licenses/by/4.0/).
We use cookies on our website to ensure you get the best experience. Read more about our cookies here.
Accept
We have just recently launched a new version of our website. Help us to further improve by taking part in this short 5 minute survey here. here.
Never show this again