With the rapidly increase of automobiles and trucks, more than 1.5 billion waste tires are discarded every year [1]. This will inevitably lead to environmental pollution and resource wastage if we do not appropriately deal with waste tires. At present, four main methods are used to deal with these tires, namely pyrolysis [2,3], incineration [4], landfill [5,6], and powder manufacturing [7,8,9]. However, three of these four methods are accompanied by other disadvantages [10]. Pyrolysis is a pioneering method that can be used to generate carbon black, tire oil, and syngas from waste tires in the absence of oxygen. Pyrolysis has a series of advantages, such as low cost, high efficiency, little environmental pollution, and its key product being renewable carbon black (with a mass ratio of 30% and up depending on the pyrolysis temperature) [3]. However, because of the limited usage of discarded tires pyrolysis carbon black (TPCB) nanoparticles [11], TPCB is produced and immediately accumulated. Therefore, it is very important to broaden the application range of TPCB.
In recent years, plenty of studies have been conducted to use carbon black (CB) as a modifier for asphalt binders [12,13,14,15,16,17,18,19,20]; these works are a good start towards enlarging the application field of CB. Previous research investigated the modified effect of CB on the workability or mechanical properties of asphalt binders and their mixtures, with the results indicating that CB had good compatibility with asphalt binders and a reinforcement effect on asphalt binders, and decreased the resistivity of asphalt [12]; it could improve the complex modulus [13] and anti-aging performance (ultraviolet aging and thermo-oxidative aging) of asphalt binders [15], as well as enhance the anti-rutting performance of asphalt mixtures at high temperatures [14]. However, there was no consistent conclusion about the effect on low-temperature performance: some studies showed that carbon black could improve the low-temperature performance of asphalt, while others showed that it cannot or that it has no effect [16,17]. However, in general, micrometer and nanometer powder materials always have a stiffening effect on asphalt and can reduce the anti-crack property of asphalt at low temperatures [18,19,20].
In addition, previous research mostly studied the modified effect of industrial carbon black. The performance of CB depends on its structure, surface area, and particle size. TPCB differs from industrial carbon black in terms of its composition and structure form. For example, the particle size of TPCB is roughly equal to the average particle size of industrial carbon black, which indicates that TPCB is a compound material consisting of different kinds of industrial carbon black [10]. The desorption ability of TPCB is poor [19] and may not have good compatibility with rubber or may be difficult to disperse uniformly in asphalt. The modified effects of TPCB on the performance of asphalt binders or its mixtures may be different to industrial carbon blacks, so it is of great importance to investigate the TPCB effect on the pavement performance of asphalt binders and their mixtures.
In this paper, the characteristic functional groups, particle size distribution, and thermostability of TPCB are studied. A base asphalt binder of Maoming GaoFu 60/80 asphalt binder (GF-70) was designated to prepare the TPCB-modified GF-70 (TPCB/GF-70) by mixing it with a 15% dosage of TPCB; the physical performance and rheological properties were investigated to evaluate the influence of TPCB on GF-70. In order to improve the low-temperature performance of TPCB/GF-70, four levels of dosage (0.3%, 0.6%, 0.9%, and 1.2%) of aromatic hydrocarbon oil (AHO) were used as the softening agent for TPCB/GF-70. Finally, two kinds of asphalt mixtures of AC-13 and AC-20 were created to investigate the influence of TPCB on the pavement performance of asphalt mixtures.

A base asphalt binder of GF-70 was provided by Sinopec Maoming Company (Maoming, Guangdong, China). Table 1 gives the technical information of GF-70.

The TPCB used in this research was manufactured by Kimkey Environmental S&T Co., Ltd. (Shanghai, China). The appearance of TPCB is shown in Figure 1. Technical information on TPCB is listed in Table 2.

In order to increase the low-temperature performance of TPCB modified asphalt binder, AHO was used as the softening agent to soften asphalt binder. AHO was manufactured by Hubei Guochuang Hi-tech Material Co., Ltd. (Hubei, China). AHO is a black sticky liquid, the main components of which are aromatics and colloid. It can be dissolved in asphalt to improve the component of an asphalt. At the same time, it can also increase the ductility of modified asphalt, especially at low temperatures.

The crushed basalt was used as the aggregate of the asphalt mixture. In order to ensure the stability of the granular gradation, both the coarse and fine aggregate were sieved and divided into grades. The technical information on the aggregates is shown in Table 3. It should be noticed that the aggregate was first mixed according to the aggregate gradation of the AC-20 mixture (given in the following section of this paper), then divided into coarse and fine aggregates with a diameter bigger or smaller than 4.75 mm, respectively. The limestone powder was used as the filler of the asphalt mixture; there was no moisture and clumping phenomenon in limestone powder, the technical information for which is also given in Table 3.

The characteristic functional groups of TPCB were tested by a Fourier transform infrared (FTIR) spectrometer. The kalium bromate (KBr) disk method was used to prepare the TPCB samples for FTIR testing, with a mass ratio of TPCB to KBr of 1 mg/100 mg. The instrument parameters of FTIR were that the scan time was set to 64 times, and scan wave number range was 4000 cm−1~400 cm−1.

The laser particle size analyzer, produced by Jinan Micronano Particle Instrument Co., Ltd. (Jinan, Shandong, China), was used to investigate the particle size distribution of TPCB. The particle size test range of this instrument was from 1 nm to 10,000 nm; the dispersible agent was alcohol with a viscosity of 0.001096 Pa·s, the refractive index was 1.332, and the delay unit time was 50 μs.

The thermal properties of TPCB were investigated by thermogravimetric (TG) testing in air, with the test temperature range from 50 °C to 700 °C, the heating rate at 10 °C/min, and the mass of every sample at 10 mg.

Penetration testing was done according to the criterion of ASTM D5 at three temperatures, 15, 25, and 30 °C; other parameters such as PI, equivalent softening point (T800), and equivalent brittle point (T1.2) were calculated according to Equations (1)–(3), respectively. The softening point and ductility of GF-70 and TPCB/GF-70 were investigated depending on the criterions of ASTM D36 and ASTM D113, respectively. where A and K are the slope and intercept of the linear regression equation of the logarithm of penetration at three different temperatures, 15 °C, 25 °C, and 30 °C.

First, the TPCB-modified asphalt was poured into an aluminum tube with a diameter and height of 25 mm and 140 mm, respectively. Then, we set the aluminum tube in an oven at a constant temperature of 163 °C for 48 h and cooled it in a refrigerator at 5 °C for more than 4 h. After that, the tubes were cut into three equal sections. The softening points of the top and bottom sections were tested to calculate the softening point differences.

Before the bending beam rheometer (BBR) test, the asphalt binder was first aged by RTFOT, followed by PAV. The BBR test was conducted at a temperature of −12 °C and −18 °C, respectively, to investigate the TPCB effect on the low-temperature creep properties of GF-70. The sample size of asphalt binder beams for the BBR test was 125 mm × 12.5 mm × 6.25 mm, the binder beams were set to an absolute ethanol bath at the experiment temperature for 60 ± 5 min, then, the creep stiffness and m-values of asphalt binders were tested with a constant load of 980 ± 50 mN for 240 s.

2.5. Experiments on the Asphalt Mixture

The particle size distribution of TPCB was investigated by laser size analysis. The curves corresponding to the Gaussian fit are shown in Figure 3. The size of TPCB nanoparticles is mainly distributed in the diameter range from 50 nm to 5000 nm. In detail, the D10 (accumulation of 10%), D50 (accumulation of 50%) and D90 (accumulation of 90%) of TPCB are 200.35 nm, 481.65 nm, and 1159.35 nm, respectively, which indicates that the particle size distribution of TPCB is not uniform. The reason is that, on the one hand, in order to satisfy the requirements of characteristics at different positions of tires, different kinds of CB are added to the tires, so that TPCB is a compound of different kinds of CB from the raw material of tires; on the other hand, the coking substances generated in the pyrolysis process can affect the particle size distribution of TPCB.

The thermogravimetric (TG), differential thermogravimetric (DTG), and differential scanning calorimetric (DSC) curves are shown in Figure 4 to study the thermal properties of TPCB. There are two mass loss stages in the TG image of TPCB. In detail, the temperature range of stage one is from 50 °C to 126 °C, the mass loss ratio in this stage is 1.42%, and the fastest loss rate can be found at a temperature of 94.3 °C. The peak value of 102.9 °C in the DSC curve shows that stage one is an endothermic phase, so it corresponds to the endothermic phase of the evaporation of water by TPCB. The temperature range of stage two is from 126 °C to 700 °C. There is a peak value of 416.4 °C in the DSC curve, which indicates that stage two is a heat-releasing phase and mainly corresponds the combustion of the residual organics in TPCB. The mass loss ratio of 10.38% is relatively larger in this stage, but the heating temperature in the preparation process of TPCB/GF-70 is not higher than 160 °C and the mass loss ratio at 160 °C is only 2.76%, which shows that the thermal properties of TPCB can satisfy the requirements for preparing a TPCB-modified asphalt binder.

3.2. TPCB’s Effect on the Performance of Asphalt

3.2.1. TPCB’s Effect on the Physical Performance of Asphalt

3.2.2. TPCB’s Effect on the Rheological Properties of Asphalt

3.3. Optimizing the Physical Performance of TPCB/GF-70

3.4. TPCB’s Effect on the Pavement Performance of an Asphalt Mixture

TPCB/GF-70 was prepared by a melt blending method. The characteristics of TPCB such as chemical structure, surface morphology, and particle size distribution were investigated by some modern testing techniques. The physical performance and rheological properties of GF-70 without and with TPCB were studied to investigate TPCB’s effect on the performance of asphalt binders. AHO was used to improve the low-temperature performance of TPCB/GF-70 and its mixtures. The following conclusions can be made:

The authors acknowledge the funding from the Key Laboratory of Road Structure & Material Ministry of Transport, Beijing, China, 100088; and the National Key Scientific Apparatus Development Program of the Ministry of Science and Technology of China (No. 2013YQ160501). 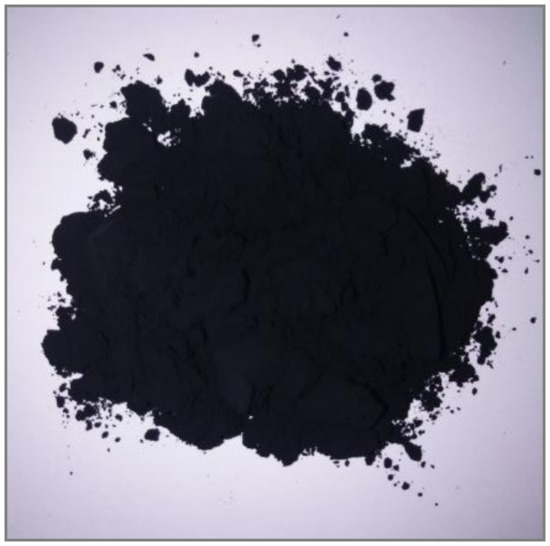 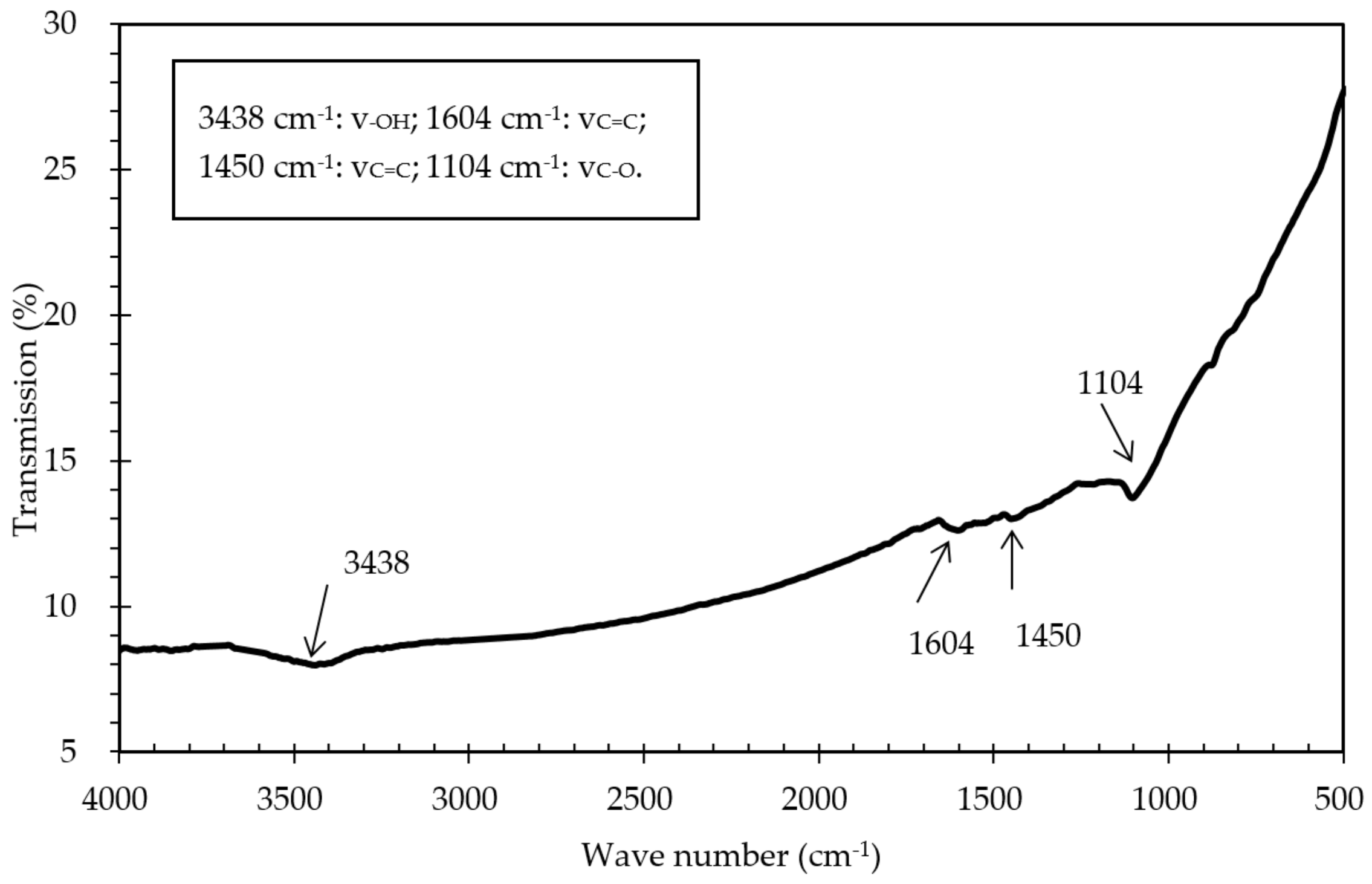 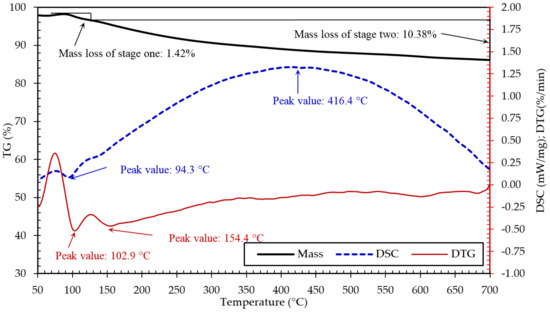 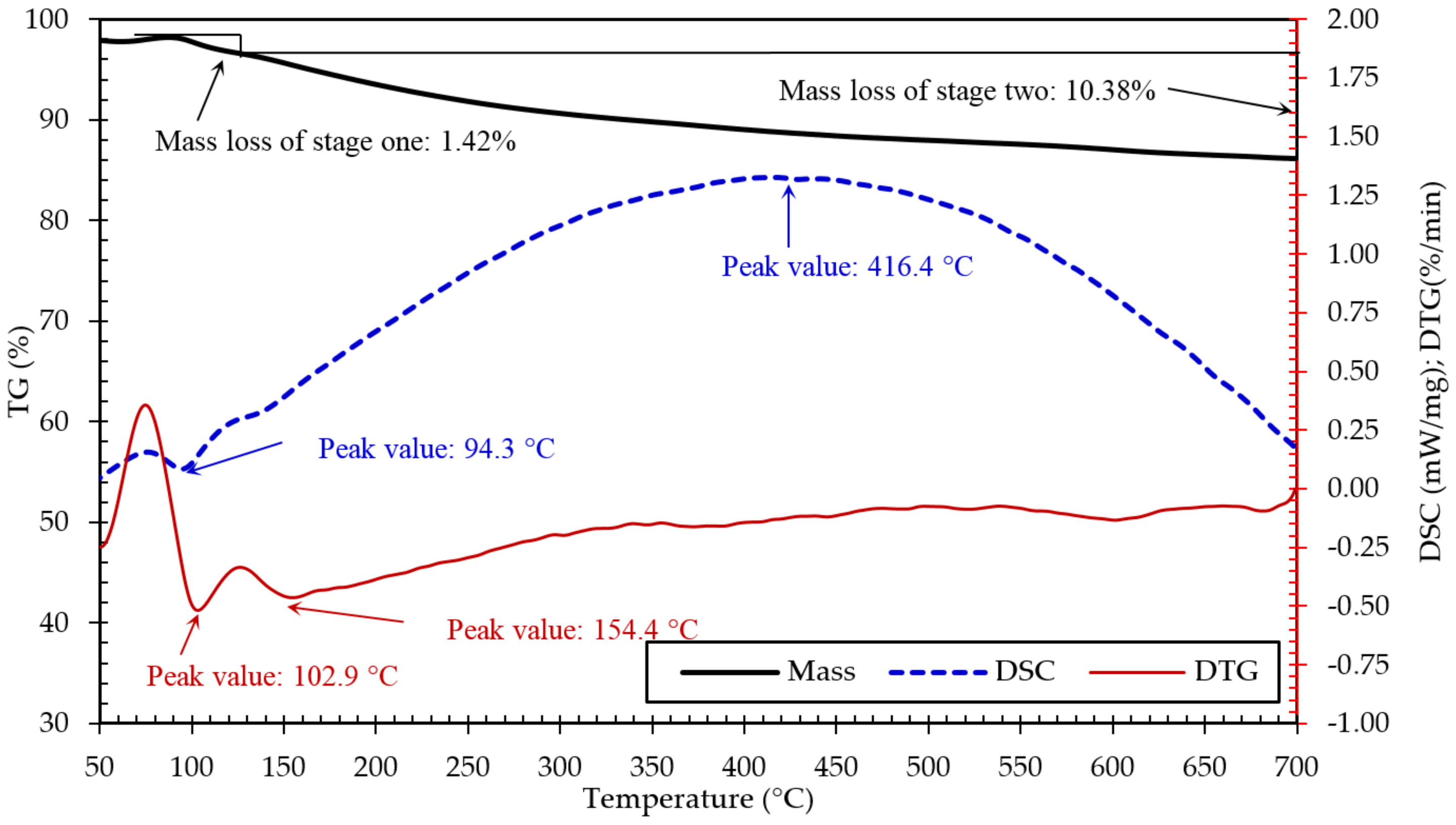 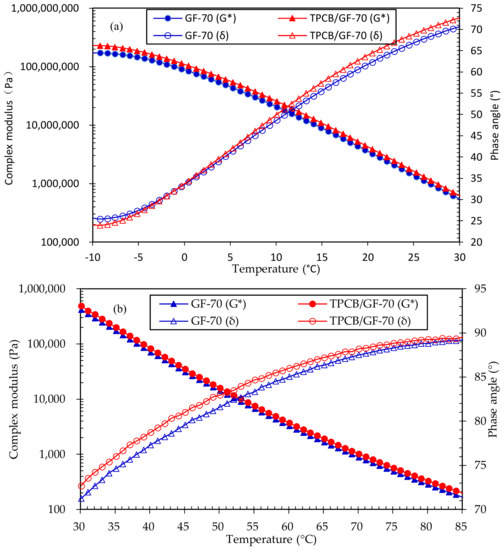 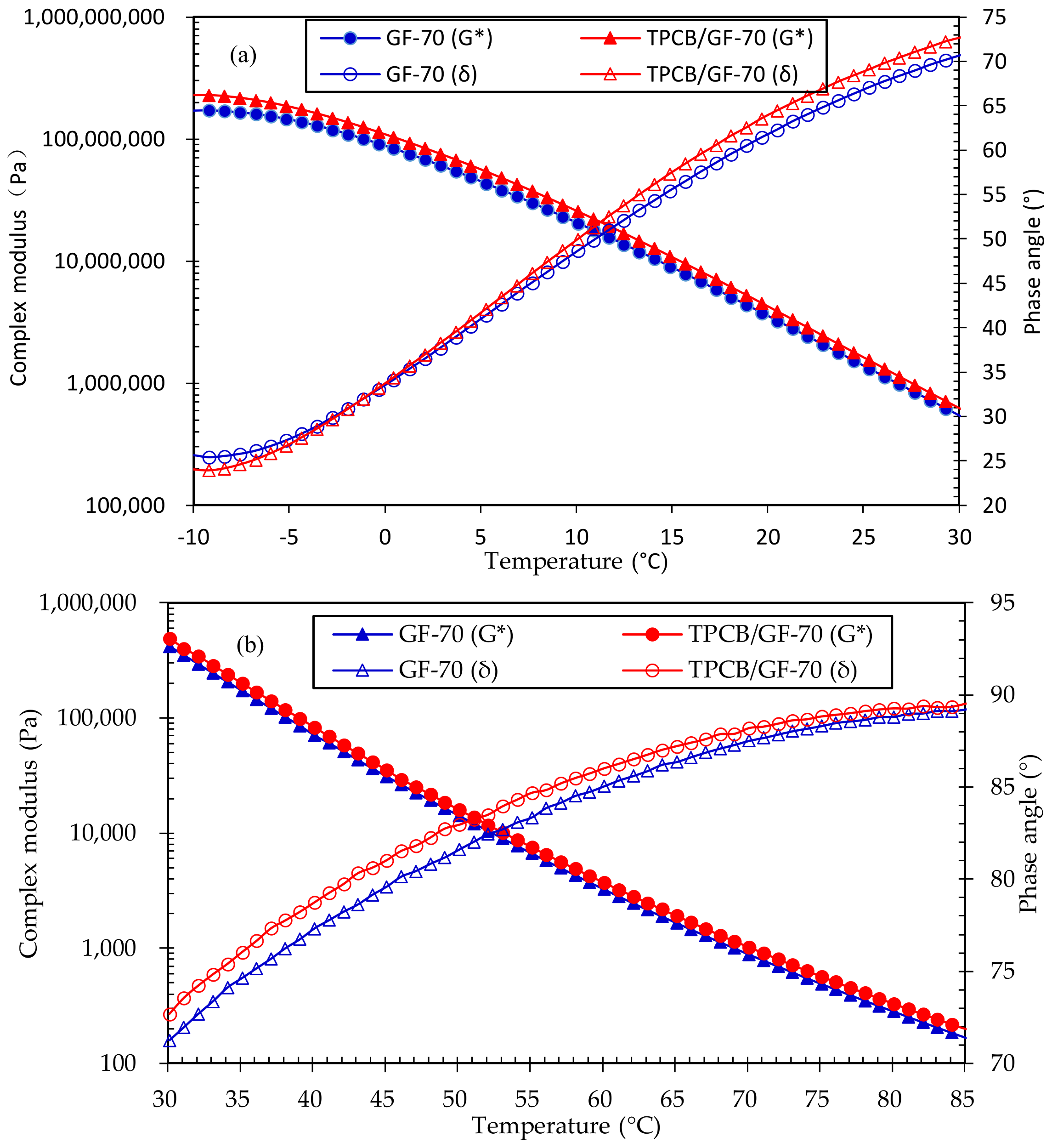 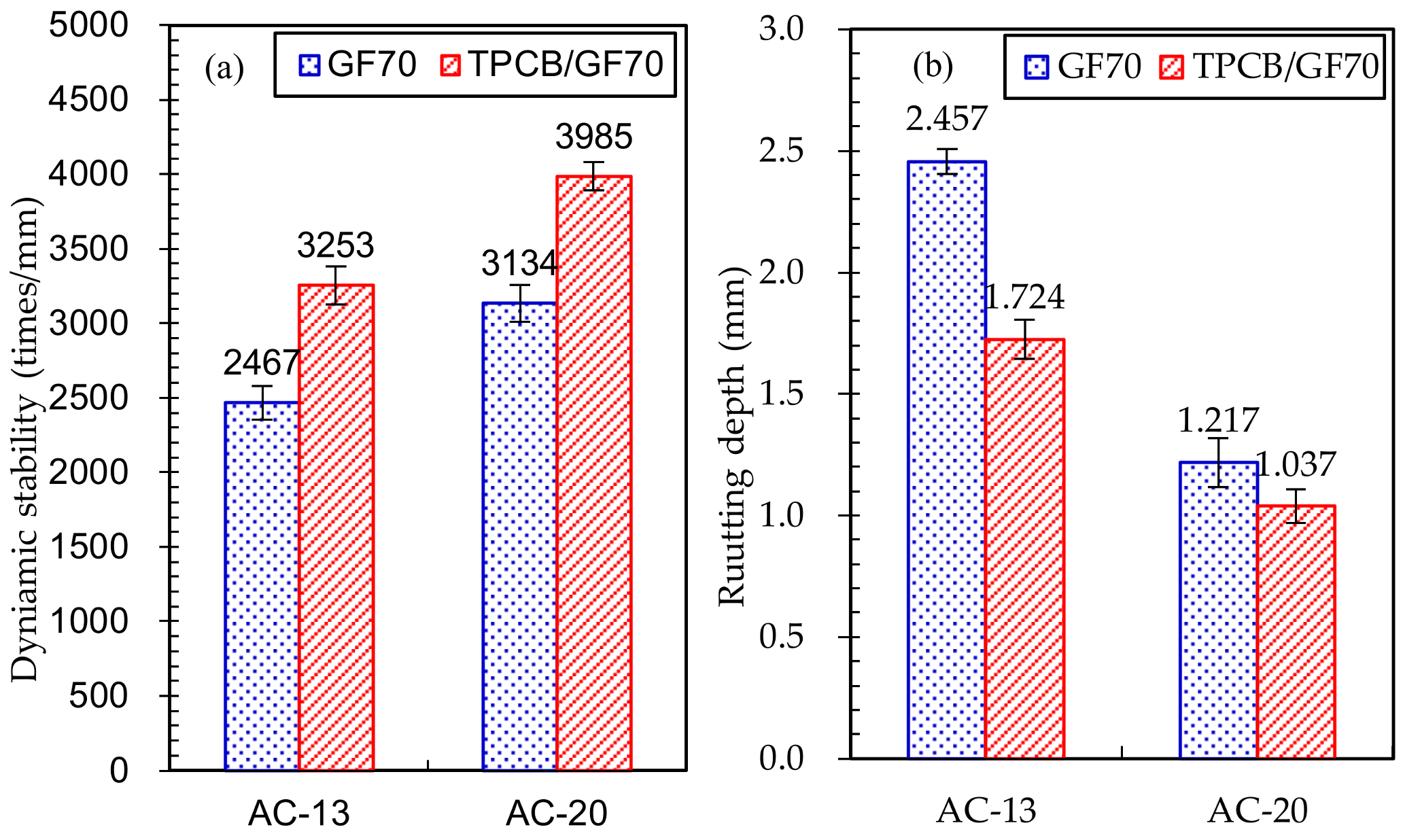 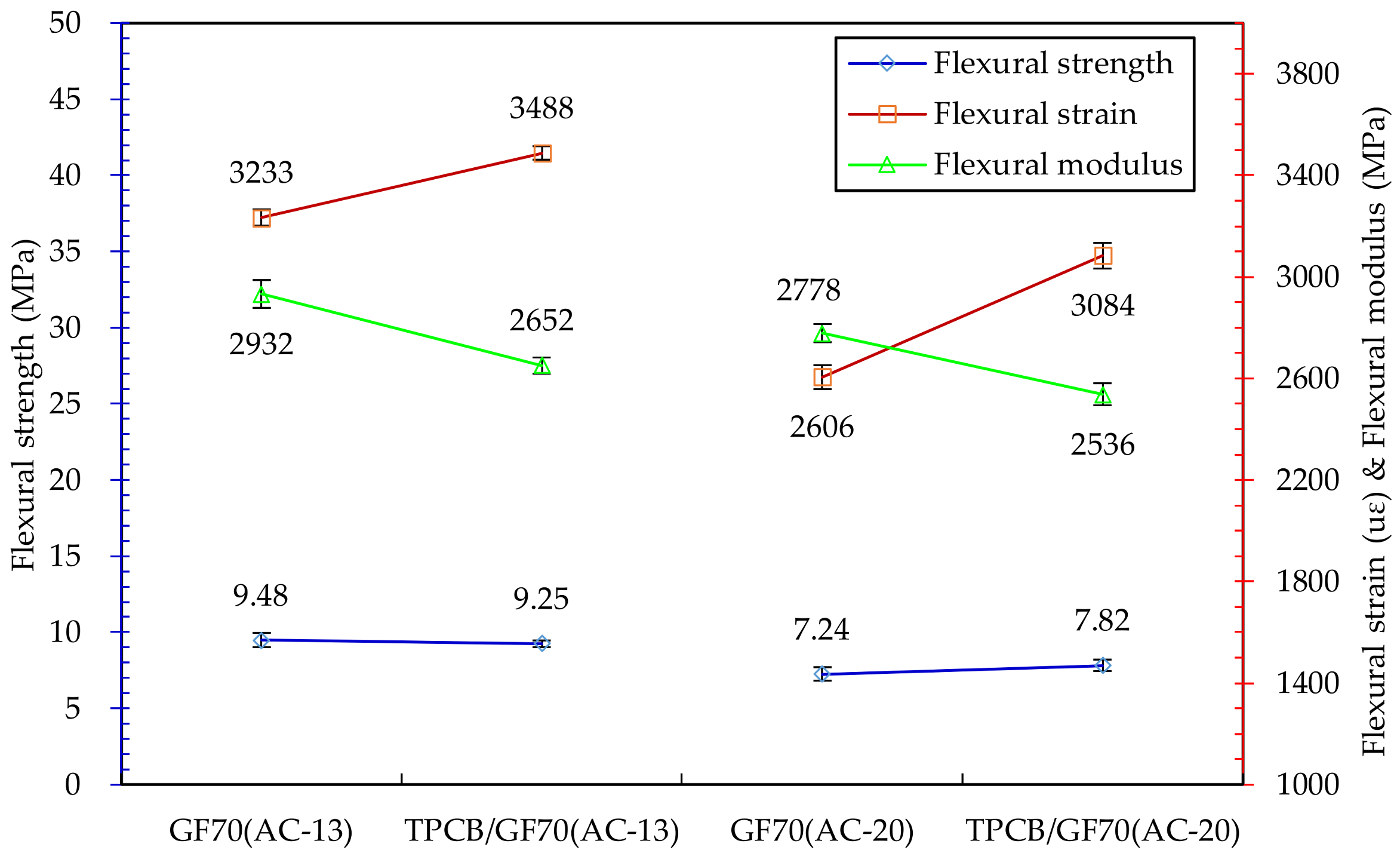 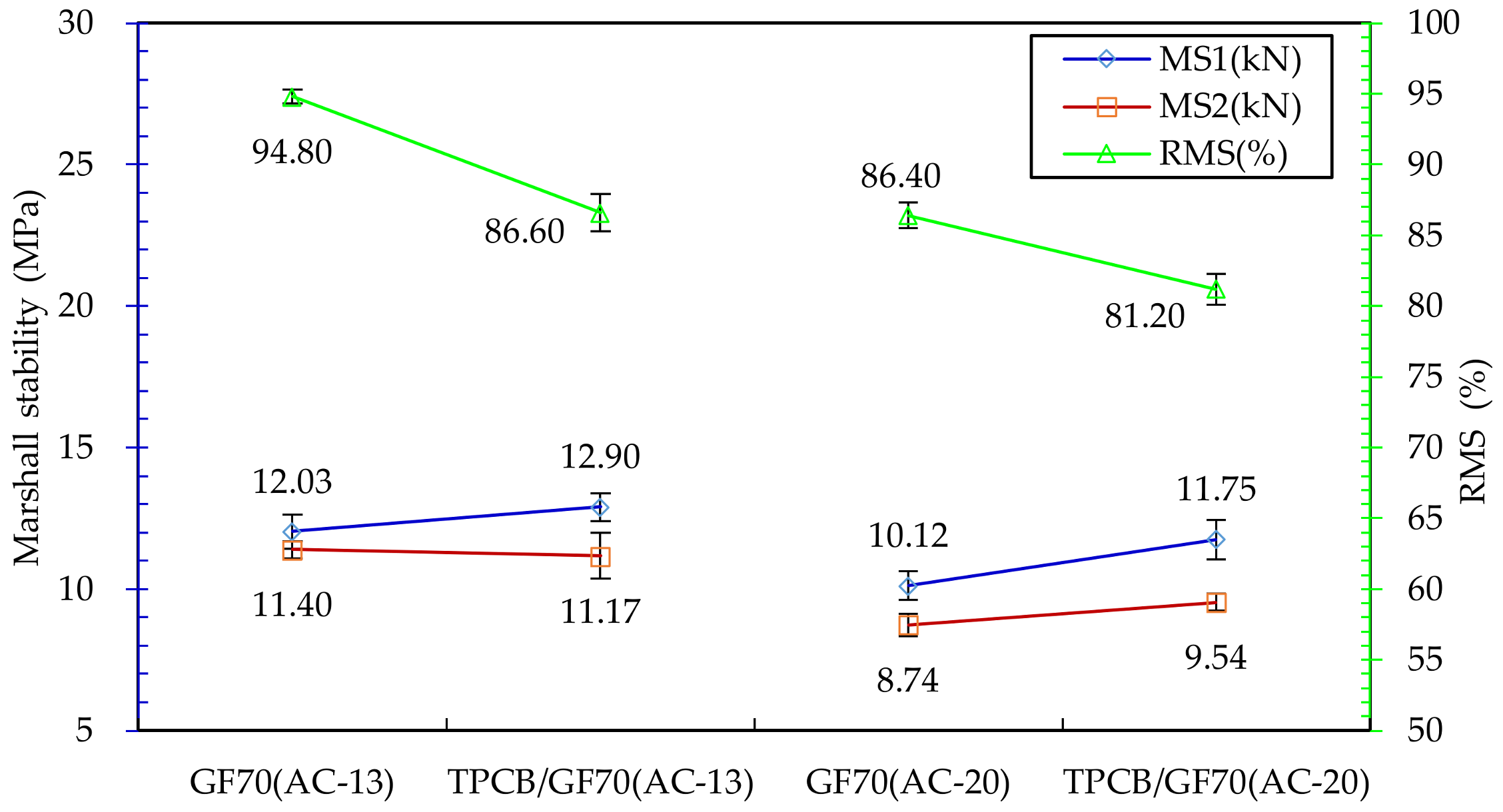