Controlling the amplitude, frequency, and phase of a radio frequency (RF) signal in an optical domain has attracted significant interest. This is because microwave photonic signal processors can overcome inherent electronic limitations including limited bandwidth, electromagnetic interference, and limited tunability [1]. Various techniques have been proposed to control the phase of a RF signal. Many reported microwave photonic phase shifters (MPPSs) involve either using an optical filter to remove one RF modulation sideband [2,3,4] or using a 90° hybrid coupler to produce a pair of 90° phase difference RF signals into an optical modulator [5,6,7]. The MPPSs implemented using a 90° hybrid coupler can be operated over a wide frequency range, which is only limited by the coupler bandwidth. However, they suffer from the problem of ripples in the phase shifter output amplitude and phase response, causing output RF signal amplitude variation and phase deviation.
The aim of this paper is not to present a new MPPS structure but to present a detailed investigation on the cause of ripples in the frequency response of the MPPSs implemented using a 90° hybrid coupler. This is important since many reported MPPSs rely on using a 90° hybrid coupler to produce two 90° phase difference RF signals [5,6,7], and the non-ideal frequency response characteristic of the coupler degrades the phase shifter performance. However, until now, there has been no investigation on how the non-ideal behavior of a coupler affects the MPPS output RF signal. In addition to presenting an investigation of this issue, a technique to solve the problem of MPPS output amplitude variation and phase deviation, i.e., to flatten the frequency response of a MPPS implemented using a commercial 90° hybrid coupler, is also presented and is experimentally verified, with the results agreeing with simulations.

Experiments were set up to investigate the ripples in the frequency response of a MPPS and to verify that using a low cost optical filter can improve MPPS frequency response performance. The experimental setup is shown in Figure 5. The laser source (Keysight N7714A) was a wavelength tunable laser operated at 1557.8 nm. The laser output power was 16 dBm. A dual-polarization DPMZM was connected after the laser source. It was formed by two DPMZMs, a 90° polarization rotator, and a polarization beam combiner (PBC). Each DPMZM consisted of two MZMs connected in parallel and an OPS at one of the MZM outputs. No RF signal was applied to the lower DPMZM, and the two MZMs were biased at the maximum and minimum transmission point, respectively. Therefore, the optical carrier passed through only one MZM but was blocked by the other MZM. Thus, by controlling the voltage into the OPS, the optical carrier phase could be tuned. The upper DPMZM was driven by a pair of RF signals with 90° phase difference via a 4–40 GHz bandwidth 90° hybrid coupler (Marki Microwave QH-0440 [11]) with the frequency response shown in Figure 2 (red line). A SSB-SC RF modulated optical signal could be generated by designing the bias voltages into the upper DPMZM [8]. Therefore, the dual-polarization DPMZM had the same function as an integrated OFS and OPS structure. A single compact modulator bias controller (PlugTech MBC-DPIQ-01 [12]) was used to control the modulator bias voltages. A polarization controller (PC) and a polarizer at the output of the dual-polarization DPMZM were employed to ensure the carrier and the sideband had the same polarization state. This was followed by an optical filter, which had 1.5 dB insertion loss. Since the laser source had high output optical power and the optical filter had low insertion loss, the average optical power after the optical filter was −4 dBm. No optical amplifier was used in the experiment. The carrier with a tunable optical phase shift from the lower DPMZM and the single RF modulation sideband from the upper DPMZM beat at a 50 GHz bandwidth photodetector (U2t XPDV2120R), which was connected to a 43.5 GHz bandwidth vector network analyzer (VNA) (Agilent N5224A) to display the phase shifter amplitude and phase response.
The optical spectrum at the output of the dual-polarization DPMZM was measured on an optical spectrum analyzer (OSA), as shown in Figure 6, when the upper DPMZM was driven by a 32 GHz RF signal. This shows that, for a high input RF signal frequency of 32 GHz, the unwanted left sideband was only 16 dB below the wanted right sideband due to the 90° hybrid coupler had large amplitudes and phase imbalances at high frequencies. Note that even though the carrier at the output of the upper DPMZM could not be fully suppressed, the residual carrier was 39.3 dB below the carrier from the lower DPMZM. Therefore, the residual carrier had a negligible effect on the MPPS performance. The amplitude and phase response of the MPPS were first measured without an optical filter and the results are shown in Figure 7. This was done by programming the bias controller to alter the DC voltage into the OPS inside the lower DPMZM in the dual-polarization DPMZM. The experimental results show there are 4.2 dB amplitude variations and a ±12° phase deviation for a −180° to 180° phase shift over the 4 to 40 GHz frequency range. Note that the amount of MPPS amplitude variation and phase deviation were different for different phase shifts. It can be seen from the figure that ±45° phase shifts have large amplitude variations and ±90° phase shifts have large phase deviations, which are consistent with the simulation results given in Figure 4.
An optical filter with an optical spectrum as shown in Figure 8 was connected after the polarizer to suppress the unwanted sideband. It had a center wavelength of 1558.05 nm, and a −3 dB and −20 dB bandwidth of 0.62 nm and 1.03 nm, respectively. Its roll-off factor was around 83 dB/nm (0.67 dB/GHz). The optical filter passed both the optical carrier and the wanted right sideband but suppressed the unwanted left sideband, especially at the frequencies far away from the optical carrier. Figure 8 shows that the unwanted left sideband at the frequency of 32 GHz away from the optical carrier was suppressed to the OSA noise level. Therefore, a single sideband RF modulated optical signal with large unwanted sideband suppression can be obtained not only for low RF signal frequencies but also for high RF signal frequencies. The measured amplitude and phase response of the MPPS with the inclusion of an optical filter are shown in Figure 9. It can be seen from the figure that the MPPS exhibits a flat amplitude and phase response performance over a wide bandwidth from 4 to 40 GHz. The amplitude variation was <2.2 dB and the phase deviation was <±3.8° for a −180° to 180° phase shift over the MPPS bandwidth. Similar amounts of amplitude variation and phase deviation in the phase shifter frequency response were obtained when the 90° hybrid coupler used in the experiment was replaced with the other two 90° hybrid couplers with the frequency responses shown in Figure 2. These small amplitude variations and phase deviations are due to the residual carrier at the output of the OFS and the noise present in the system. Nevertheless, the experimental results verify the concept of inserting a low cost optical filter in a MPPS implemented using a 90° hybrid coupler can overcome the amplitude variation and phase deviation problem caused by the 90° hybrid coupler amplitude and phase imbalance.

The presence of ripples in the frequency response of a MPPS implemented using a 90° hybrid coupler has been investigated. The ripples are due to the coupler amplitude and phase imbalance, which are large at high input RF signal frequencies. This generates an unwanted RF signal modulation sideband at the MPPS output, which causes amplitude variation and phase deviation. A technique for suppressing the ripples, by inserting a low-cost optical filter in the MPPS structure, has been presented. The experimental results demonstrated a large improvement in the MPPS phase deviation from ±12° to ±3.8° for a −180° to 180° phase shift over a 4 to 40 GHz frequency range. 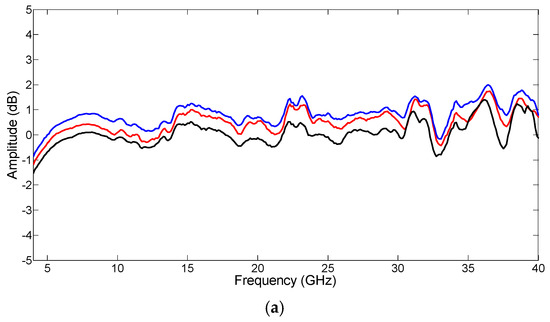 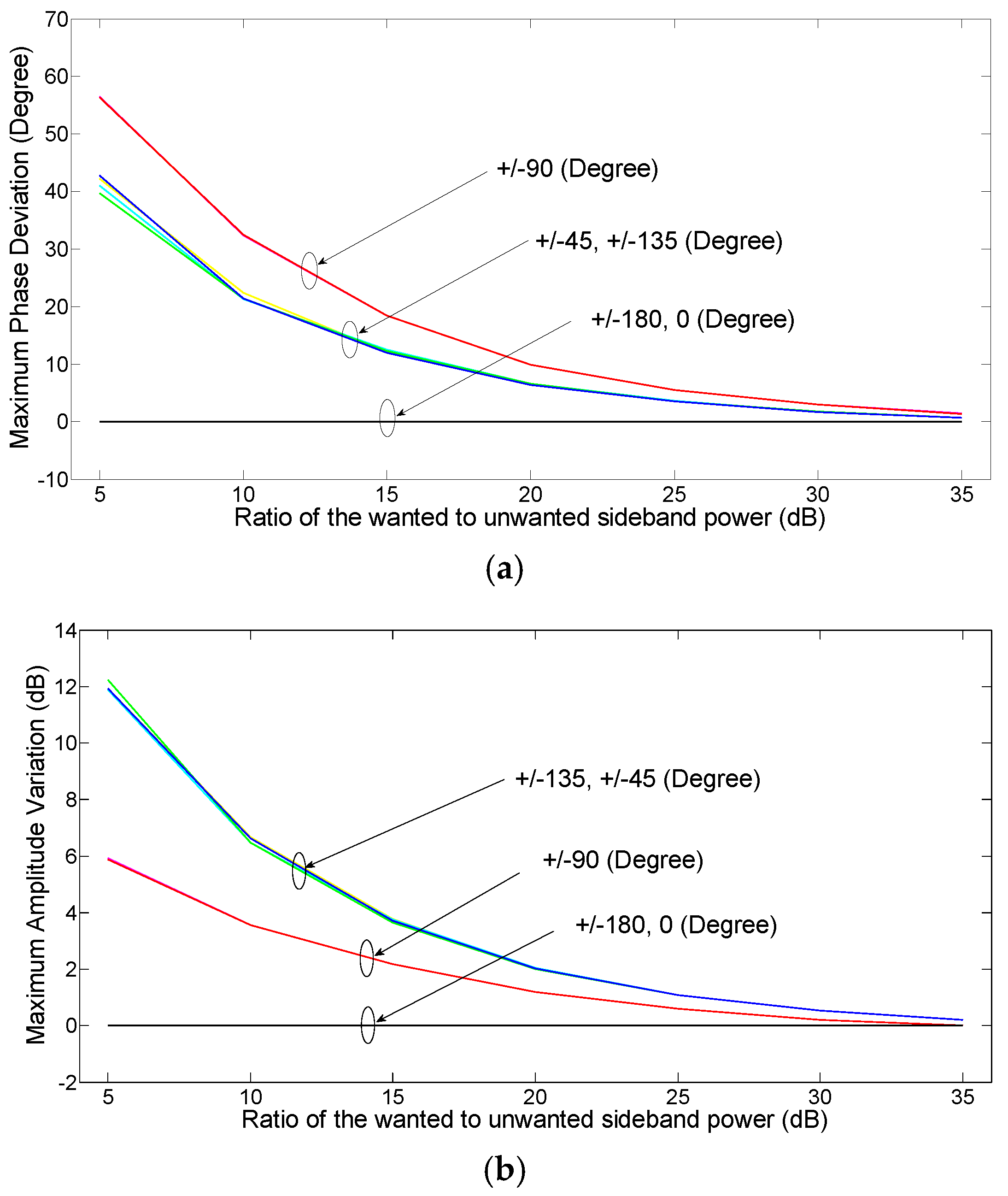 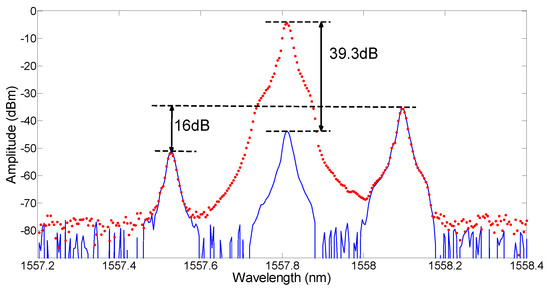 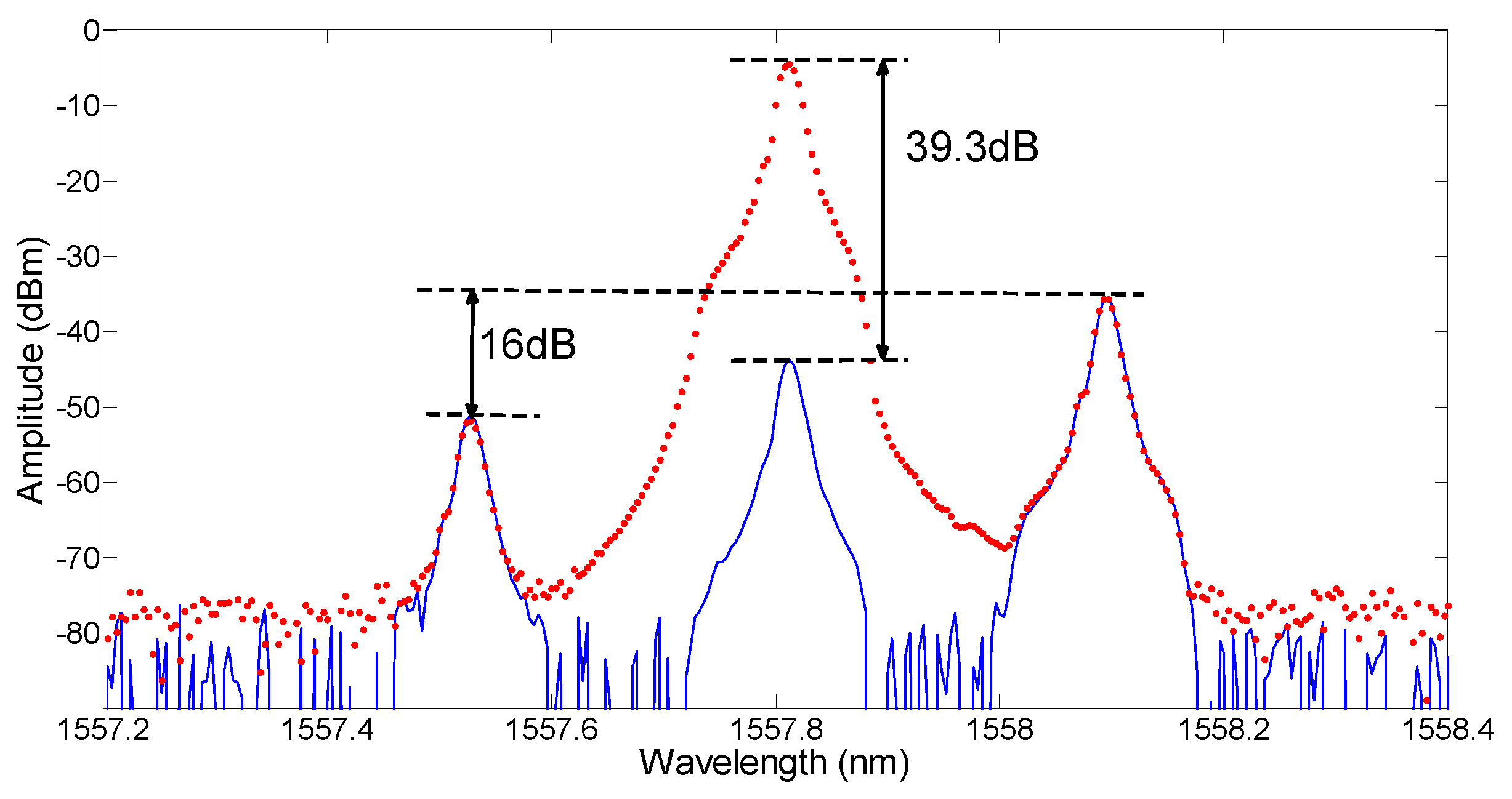 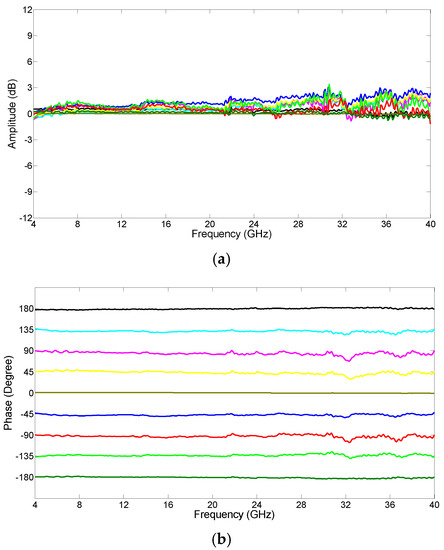 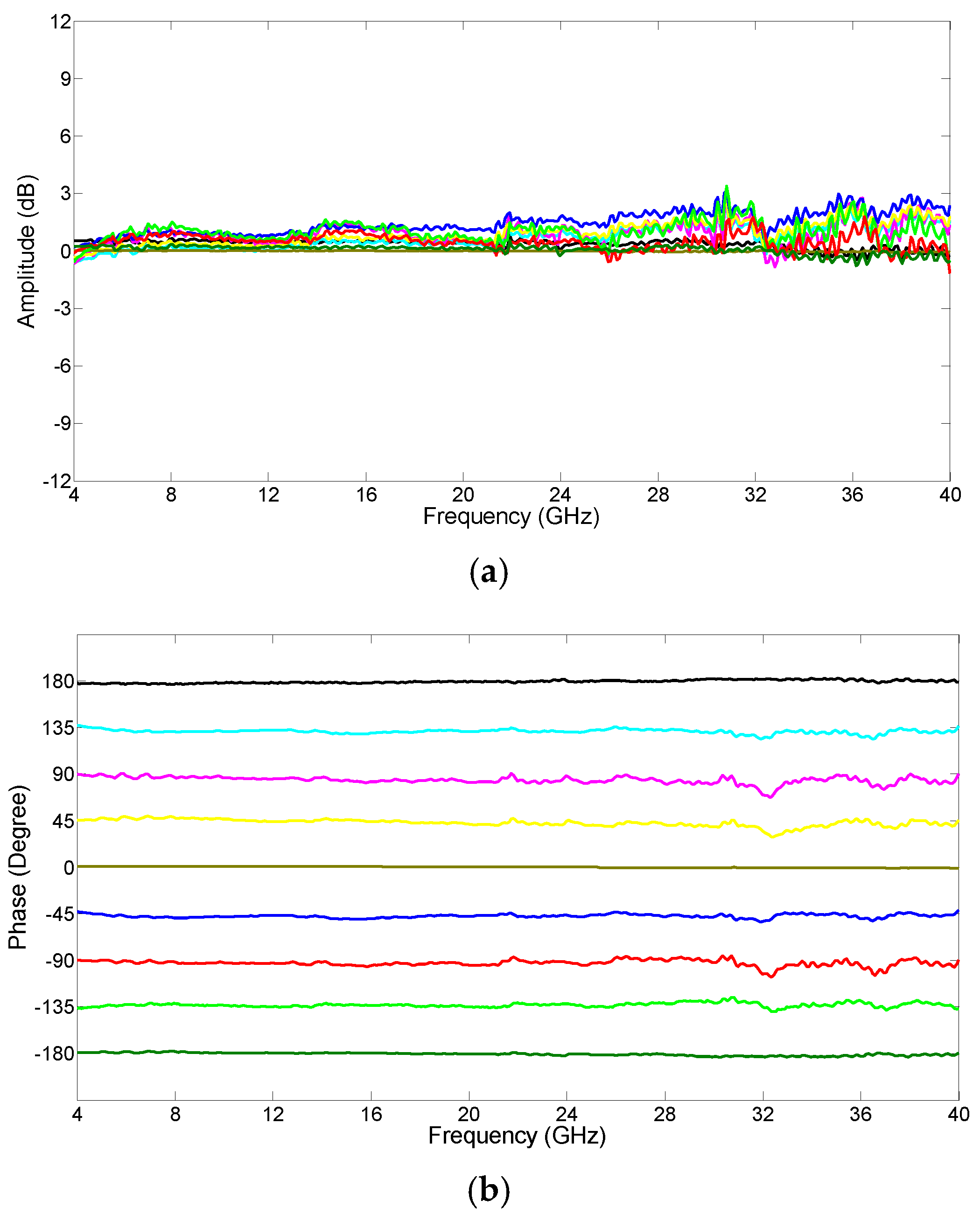 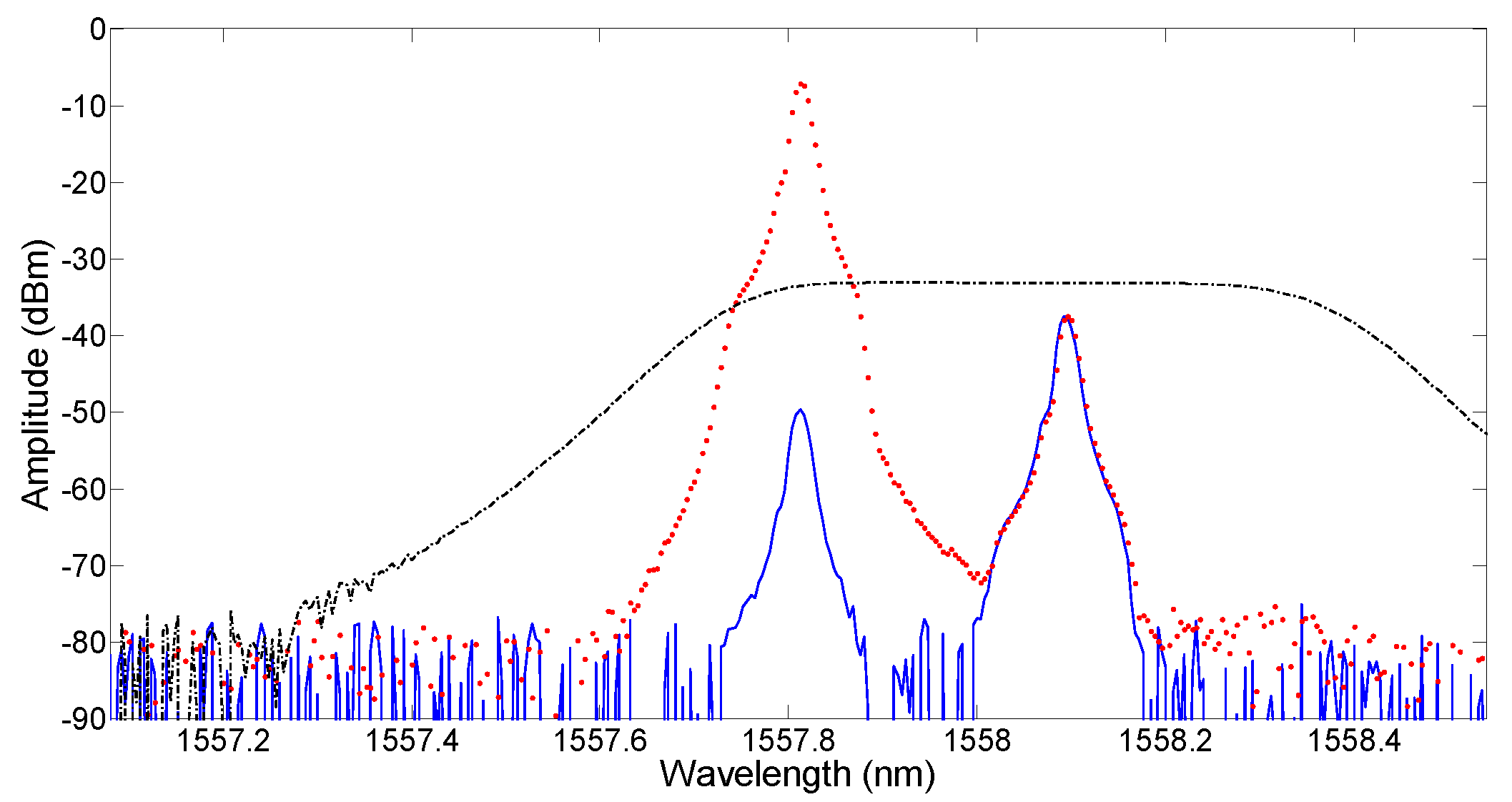