Correlation for Condensation Heat Transfer in a 4.0 mm Smooth Tube and Relationship with R1234ze(E), R404A, and R290

A schematic of the experimental setup is shown in Figure 1, a vapor compression heat pump system consisting of a refrigerant loop and four heat-source water loops. The refrigerant loop consists of a compressor, oil separator, pre-condenser, test section, rear condenser, liquid receiver, mass flow meter, expansion valve, and evaporator. Each heat-source water loop consists of a water tank, temperature control unit, water pump, and flow meters. The refrigerant flow rate is adjusted by the expansion valve, bypass valve, and rotational speed of the compressor.
Details of the pre-condenser and test section are shown in Figure 2 for measurements using R1234ze(E), which is a double-tube heat exchanger consisting of three subsections with a length of 200 mm. In each subsection, a test tube is cooled by water passing through the annulus, while the refrigerant flows within the inner tube. Measurement lengths for the pressure drop and heat transfer are 800 mm and 200 mm, respectively. Therefore, the test section for the measurements using R32, R410A, and R152a, was different from that of R1234ze(E), and it was shown in a published paper [13]. The device measurement accuracies were shown in Table 1, and the reliability of the experimental loop confirmed that heat balance is consistent, with a 10% difference between the refrigerant and heat-source water side.
The test copper tube used a smooth tube, with an outer diameter of 4.02 mm and an inner diameter of 3.48 mm. In the experimental setup, the pressure and the thermal equilibrium vapor quality of inlet No.1 subsection are changed to steady values by the pre-condenser, and the condensation process of refrigerant progresses from the No.1 to the No.3 subsection.
Under experimental conditions, the refrigerant mass velocity varied from 100 to 400 kg m−2s−1, and the saturation temperature at the inlet test section was maintained at 35 °C. The amount of quality change, which depended on the refrigerant, mass velocity, and heat flux, in each subsection, was approximately 0.2 on average, with a maximum of 0.35 for R410A in mass velocity of 100 kg m−2s−1. The physical properties of used refrigerants in this study are shown in Table 2.

In each subsection, the frictional pressure drop during the condensation process is defined as follows: where is the measured pressure drop of the refrigerant through each subsection, and is the acceleration pressure drop. The acceleration pressure drop, , is calculated by Equation (2).
In Equation (2), is a void fraction, G is the refrigerant mass velocity, and x is the vapor quality. The thermodynamic and transport properties of the refrigerants and heat-source water were found from REFPROP Ver. 9.1 [14]. The void fraction could be used from the below Equation (3), as proposed by Smith [15] in the smooth tube.
The local thermal equilibrium quality for each subsection xn is defined as follows: where hVn and hLn are the enthalpies of liquid and vapor in the saturation state, and hn is the local enthalpy of each subsection. hVn and hLn are found by the saturated pressure of each subsection. The local enthalpy of No. 1 subsection center is determined as follows: where hpre is the enthalpy of the superheated vapor at the inlet of the pre-condenser, and Qpre and Qc1 are the heat transfer rates in the pre-condenser and No. 1 subsection, respectively. mr is the refrigerant flow rate; hpre is found by the measured pressure and temperature at the inlet mixing chamber of pre-condenser, while the local enthalpy of the No. n subsection center, after the second subsection, is found as follows:
The condensation heat transfer coefficient is defined as where Qc is the heat transfer rate in each subsection, obtained from the heat balance of the heat-source water flowing inside the annulus; L is the effective heat transfer length, and di is the inner diameter of the tube. Twi is the arithmetic mean temperature of the tube’s inner wall surface. Tr was found by the measured refrigerant pressure, and Twi was calculated from the measured temperature of the tube’s outside wall surface from a one-dimensional thermal conductivity equation. where do is the outside diameter of the tube, and λw is the thermal conductivity of the tube.

4.1. Pressure Drop in a Smooth Tube

4.3. Derivation of the General Correlation for Condensation Heat Transfer in Small-Diameter Smooth Tube

From Figure 6, it is found that the experimental values for the small-diameter smooth tube could not be correlated with sufficiently high accuracy, and could not be easily predicted by using the existing correlation. Therefore, we tried to derive an empirical correlation to predict the heat transfer coefficients, for many types of refrigerants, based on the Haraguchi et al. [2] correlation. In their correlation, Haraguchi et al. defined the Nu number as where NuF is the forced convection condensation Nusselt number, and NuB is the free convection condensation Nusselt number. Solliman’s modified Froude number was used to distinguish the wavy flow and annular flow pattern in the small-diameter smooth tube. Dobson and Chato [3] have reported that the flow is annular when , and wavy when , based on their experimental results for a small-diameter smooth tube. The Solliman’s modified Froude number is found by where is the liquid Reynolds number of the refrigerant, and is defined as follows: where it conducts the optimization of the free convection condensation Nusselt number NuB, which is wavy when , as follows: where and a void fraction are found by Equations (20) and (8). NuF is defined as where and fV are the friction factor and the two-phase pressure drop multiplier from Equations (11) and (13), respectively. (Pr/Ti*) is obtained from the following equation, by using the Nusselt number Nu from Equation (23). where is the thermal conductivity of the refrigerant.
Figure 7a shows the relationship between (Pr/Ti*) and ReL at the annular flow area (). The following correlations were finally obtained within ±30%, then, the minimal error between the experimental and predicted values was lowest by a = 5.
The new correlation of forced convection Nusselt number NuF for the annular flow area () was obtained from Equations (21) and (24), as follows:
The correlation between the new equations and the measured data for a small-diameter smooth tube was shown in Figure 7b. From this, it is found that the new general correlation agrees well with the measured data of R32, R410A, and R152a, within approximately ±30%.
The comparison of results for R1234ze(E) for the small-diameter smooth tube was shown in Figure 8a. The predicted trend agrees with the measured values of R1234ze(E); however, the predicted value underestimates the experimental values by approximately −30%, particularly in the low wetness range. This is caused by the difference between the thermodynamic and transport properties of R1234ze(E), which is one of the low-pressure refrigerants, with the other refrigerants, which have an effect on condensation heat transfer. Figure 8b shows the comparison between the experimental data of Longo et al. [16] and the present correlation for R404A and R290. The figure shows that the trends in the entire wetness region generally agree within ±30%; it was found that the present correlation can be applied to R404A and R290 refrigerants.

The experiments to obtain data on the condensation heat transfer coefficient and frictional pressure drop, by using a 4 mm outside diameter smooth tube and R32, R152a, R410A, and R1234ze(E) as test refrigerants, were conducted in this paper. Additionally, the new general correlation of the condensation heat transfer, for broad application on small-diameter smooth tube and several kinds of refrigerants, was proposed. The results are as follows:

(1)
The frictional pressure drop of R1234ze(E) can be correlated within ±30% by our previous general correlation of frictional pressure drop for the small-diameter smooth tube.
(2)
For small-diameter smooth tubes, the condensation heat transfer coefficient can be predicted within ±30% by the correlation of Cavallini et al., which has the highest accuracy among the previously proposed correlations.
(3)
A new general correlation, by a simple and convenient method for estimating the condensation heat transfer for small-diameter smooth tubes and several kinds of refrigerants, was proposed. The predicted trend agrees with the measured values of R1234ze(E); however, the predicted value underestimates the experimental values by approximately −30%, particularly in the low wetness region.

We would like to express our gratitude for the support provided. 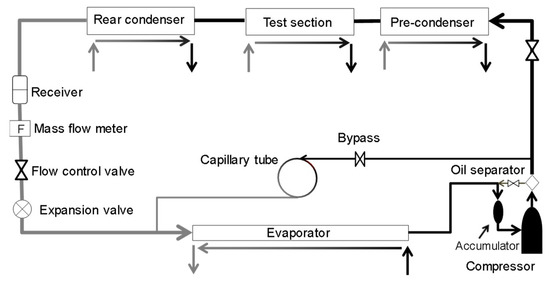 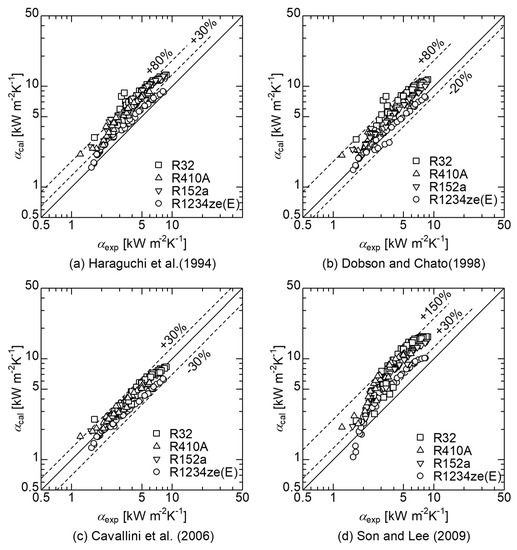 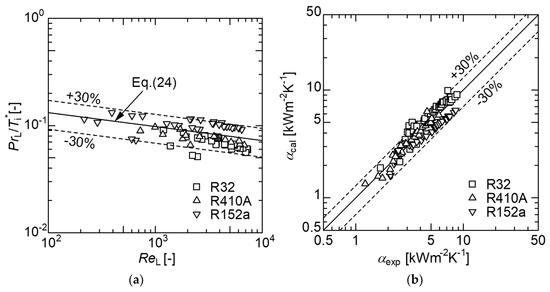 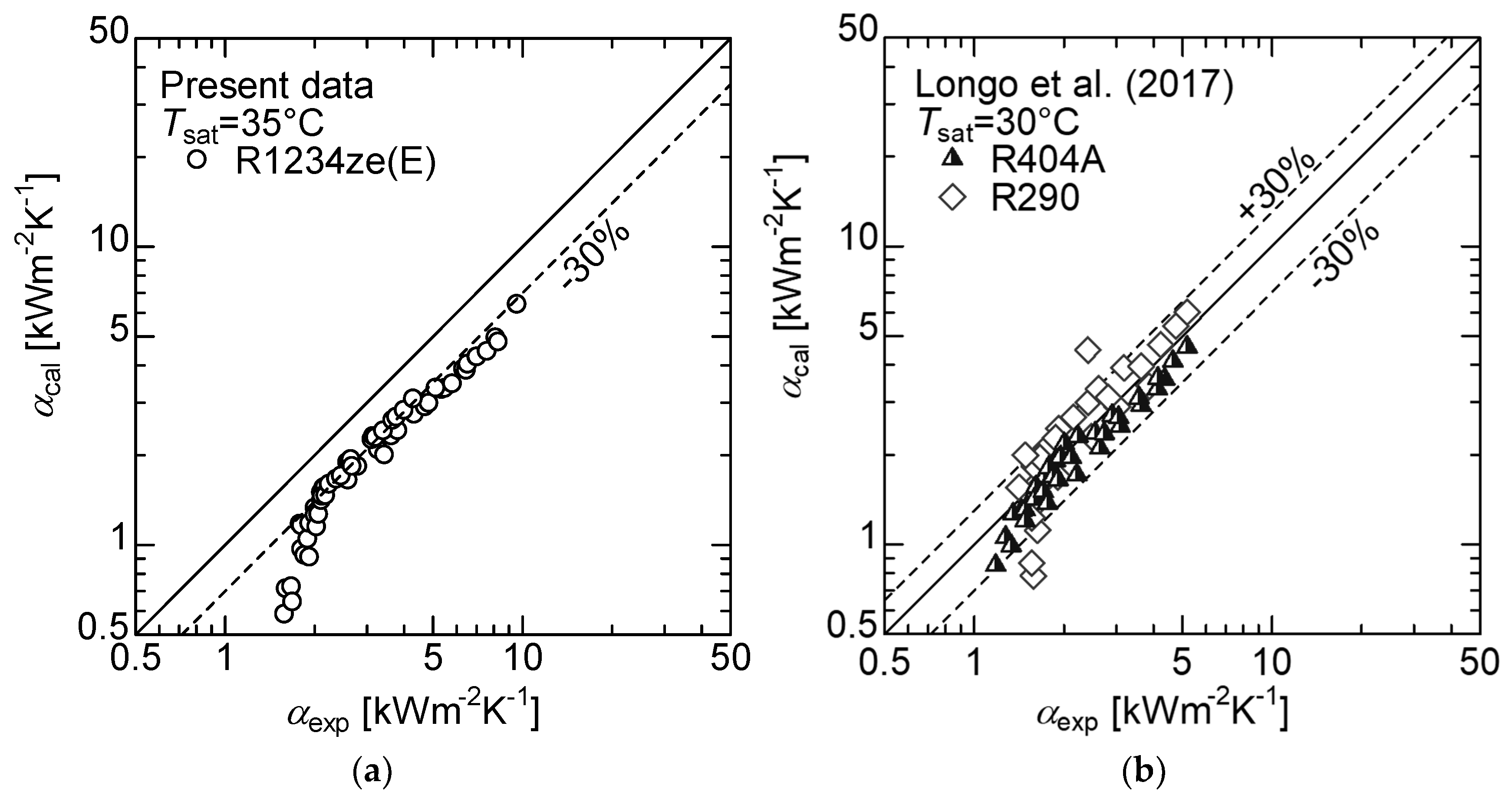