Monitoring Sound Levels and Soundscape Quality in the Living Rooms of Nursing Homes: A Case Study in Flanders (Belgium)

The soil smell is mainly characterized by two odor molecules, geosmin (C12H22O, trans-1,10-dimethyl-trans-9 decalol) and 2-methylisoborneol (C11H20O, 1,2,7,7-tetramethylbicyclo[2.2.1]heptan-2-ol). These odor molecules possess earthy and musty smell characteristics and are mainly found in soil [1]. In addition, they have been found in drinking water and various fruits and vegetables, even after various industrial processing treatments [2]. Geosmin and 2-methylisoborneol are microbial metabolites produced by actinobacteria, cyanobacteria, proteobacteria, and some fungi. Actinobacteria are the main producers of geosmin and 2-methylisoborneol in the soil, whereas cyanobacteria are the major producers of these odor molecules in aquatic environments [3,4,5].
Geosmin and 2-methylisoborneol are not a public health concern, but the presence of unpleasant tastes and odors in drinking water and food products is an important global problem. Furthermore, very low threshold concentrations of these molecules and their persistence despite common water purification processes are major problems. The odor threshold concentrations for geosmin and 2-methylisoborneol can range from 4 to 20 ng/L [6]. Humans can smell these odor molecules at very low concentrations (<10 parts per trillion) in water [7]. Many people like the odor of soil mixed with rain because it brings a lot of nostalgic memories. The smell of water can affect the psychophysiological conditions of human beings. Haese et al. [8] reviewed the tastes and odor of water based on sensory profiles, chemical measurements, and electrophysiological responses. In general, odors play an important role in emotions and the memory process. Furthermore, Zucco et al. [9] stated that even unnoticed odors may affect mental states. The influence of odor molecules on the autonomic nervous system is mainly through direct connections between odors and olfactory receptors, and their effect on brain states is via the subjective effects of odor perception [10].
A number of studies are being conducted to evaluate the olfactory stimulation effects on humans in order to understand whether odors can produce functional changes such as relaxation and excitation states in the brain [11]. The effect of odors on brain state can be measured by electroencephalography (EEG) through changes in brain wave activity. EEG is the most effective method for noninvasively investigating electrophysiological changes in the brain and is capable of exhibiting the central nervous system’s responses over time. Previously, several authors have used the EEG technique to determine brain wave changes during the inhalation of odor molecules [12,13,14]. It was also reported that EEG activity significantly changed in subjects who did not perceive the presence of odor molecules when compared with odor controls [15]. In addition, gender plays a major role in the detection, perception, and their cognitive implications of olfactory process with respect to different odors. In a similar way, various odorants produced different EEG activity according to gender. Previous studies have suggested that even isomers of odor molecules (carvone, linalool, and limonene) possess different odor qualities and intensities for humans [11,16,17].
To date, there has been no study in relation to the inhalation of gesomin and 2-methylisoborneol odors on human EEG activity. Based on the above knowledge, the present study was carried out to investigate the effect of geosmin and 2-methylisoborneol on human EEG activity in order to understand whether odor molecules with the same type of odor characteristics exhibit the same EEG activity or different.

The present study followed the Declaration of Helsinki on Biomedical Research Involving Human Subjects. The study protocol was approved by the ethics committee from the Kangwon National University, Chuncheon, South Korea. Twenty healthy subjects (10 men and 10 women) aged 20–30 years participated in this study. Individuals with olfactory diseases, mental or physical illness, and those taking medication or abusing drugs were not included in the study. Informed consent was obtained from all the subjects before participation.

A QEEG-64FX system was used to record the EEG readings (LAXTHA Inc., Daejeon, Korea). The EEG recordings were made using an electrode cap from 32 channels placed at the Fp1, Fp2, F3, F4, C3, C4, P3, P4, O1, O2, F7, F8, T7, T8, P7, P8, Afz, Cz, Fz, Pz, Fpz, Oz, Af3, Af4, Fc1, Fc2, Fc5, Fc6, Cp1, Cp2, Cp5, and Cp6 regions according to the International 10–20 System (Figure 1). The electrodes were referenced to the ipsilateral earlobe electrodes. The EEG sampling rate of the measured subjects was 250 Hz, filtered in the range of 2.5–50 Hz, and the readings were stored in a computer by 24-bit analog-to-digital conversion. The electrodes (silver/silver chloride) were applied over an elastic cap with plastic electrode holders. The ECI electrode gel (Electro-gel™, Electro-Cap International Inc., Eaton, OH, USA) was applied to each electrode to connect with the surface of the scalp in order to drop the electric resistance of the scalp below 5 kΩ.

This study was supported by a research grant from Kangwon National University, Chuncheon and the Ministry of Trade, Industry & Energy (MOTIE), Korea Institute for Advancement of Technology (KIAT) through the Encouragement Program for The Industries of Economic Cooperation Region (Project No. R0004940). 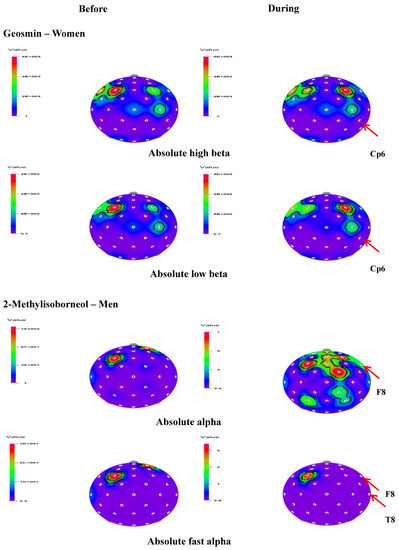 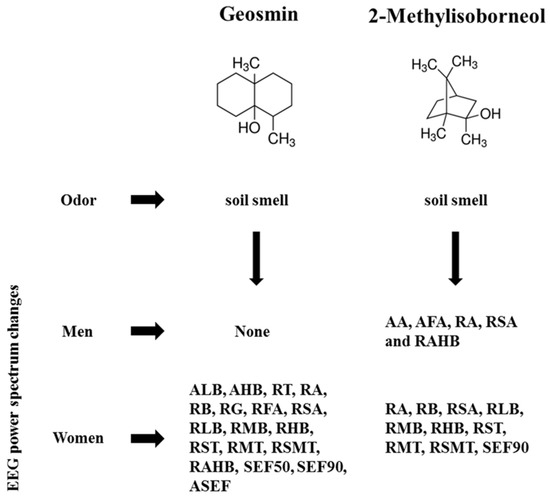 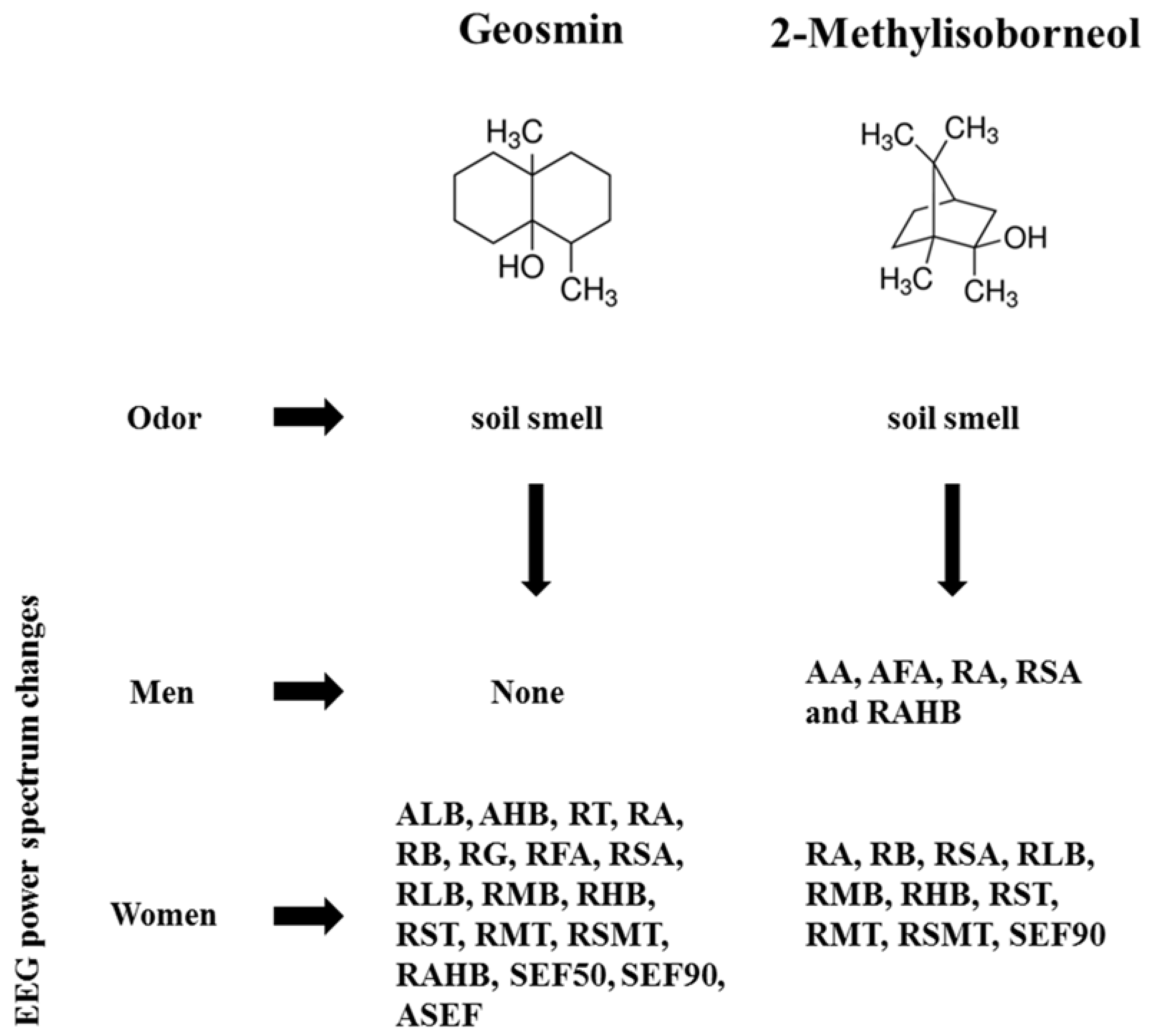