A Free Interface Model for Static/Flowing Dynamics in Thin-Layer Flows of Granular Materials with Yield: Simple Shear Simulations and Comparison with Experiments

Flows of dense granular materials comprise regions where the material is flowing, and regions where it is static. Describing the dynamics of the interface between these two regions is a key issue to understanding the erosion and deposition processes in natural environments. A free interface simplified model for non-averaged thin-layer flows of granular materials has been previously proposed by the authors. It is a coordinate-decoupled (separated variables) version of a model derived by asymptotic expansion from an incompressible viscoplastic model with Drucker-Prager yield stress. The free interface model describes the evolution of the velocity profile as well as the position of the transition between static and flowing material. It is formulated using the coordinate Z in the direction normal to the topography and contains a source term that represents the opposite of the net force acting on the flow, including gravity, pressure gradient, and internal friction. In this paper we introduce two numerical methods to deal with the particular formulation of this model with a free interface. They are used to evaluate the respective role of yield and viscosity for the case of a constant source term, which corresponds to simple shear viscoplastic flows. Both the analytical solution of the inviscid model and the numerical solution of the viscous model (with a constant viscosity or the variable viscosity of the rheology) are compared with experimental data. Although the model does not describe variations in the flow direction, it reproduces the essential features of granular flow experiments over an inclined static layer of grains, including the stopping time and the erosion of the initial static bed, which is shown to be closely related to the viscosity for the simple shear case. View Full-Text
Keywords: Granular materials; static/flowing transition; non-averaged thin-layer flow; interface dynamics; velocity profile; erosion; stopping time Granular materials; static/flowing transition; non-averaged thin-layer flow; interface dynamics; velocity profile; erosion; stopping time
►▼ Show Figures 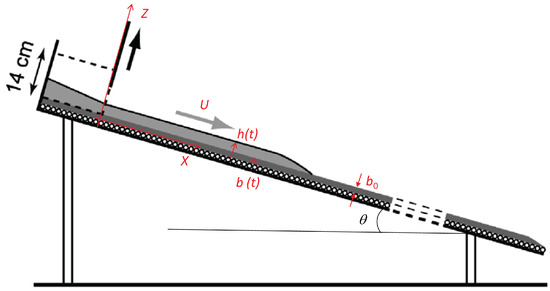