The main disadvantage of odometry is its unbounded accumulation of errors in the evaluation of the trajectory of a mobile robot (see Equation (4)). The error sources that cause inaccuracies in the determination of the odometry depend largely on the type of terrain practiced by the mobile robot [3], and are classified as systematic and non-systematic. In general, the concept of odometry calibration is focused on the minimization of systematic errors because they remain constant during the displacement. In general, the errors affecting the orientation of the mobile robot have the worst cumulative effects because once they are incurred they grow into lateral position errors [23,24].

Systematic odometry errors are usually invariant because they are caused by inaccuracies and imperfections in the mechanical implementation of the robot, such as mismatches between the nominal and effective parameters, or by limited sensors capabilities, resolution and sampling rate. Borenstein et al. [3] concluded that the systematic errors that have greater effects in the odometry are caused by unequal wheel diameters and placement accuracy in the wheelbase, which is the distance between the point of contact of the wheel with the floor and the center of the robot. Systematic errors accumulate constantly, so they are usually the main contributors to positioning errors in smooth indoor terrains.

Non-systematic odometry errors are not possible to predict, because they are originated by unpredictable features of the environment such as terrain irregularities, terrain obstacles, structural wheel slippage during specific motions, wheel slippage originated by the terrain conditions, or the application of external forces to the mobile robot. However, this paper is applied to a mobile robot operating in perfect flat indoor terrains, so the assumption is that the motion will not be affected by non-systematic odometry errors.

2.5.1. Distance and Angular Errors during a Trajectory

The determination of the maximum distance and angular error between the odometry and ground truth trajectory is obtained from the distance error vector and the angle error vector, respectively, using:

The determination of the Root Mean Square error (RMSE) that summarizes the differences between the odometry and ground truth trajectory are computed using:

The procedure proposed in this paper to systematically evaluate and correct the systematic odometry errors of the omnidirectional mobile robot APR-02 is based on the definition of 36 individual calibration trajectories which together depict a flower-shaped figure, on the measurement of the odometry and ground truth trajectory in each calibration trajectory, and on the application of several strategies to iterative adjustment of the effective value of the kinematic parameters to match the odometry and the ground truth trajectories registered in these 36 calibration trajectories. The implementation of the 36 trajectories that define the flower-shaped figure is proposed as a representative test-bench of the infinite trajectories that can perform this omnidirectional mobile robot. In this paper, each calibration trajectory has been repeated 10 times; with a total of 360 registered trajectories. Five repetitions will be used to calibrate the effective value of the kinematic parameters and Five repetitions will be used to validate the results.

This paper proposes the improvement of the odometry of the omnidirectional mobile robot APR-02 using a set of specific individual calibration trajectories that globally depict a characteristic flower-shaped figure. Figure 9 shows the proposed trajectories and Table A1 (listed in Appendix A) presents the motion command required to implement each calibration trajectory and the values of the corresponding target angular rotational velocities of the wheels required to implement each trajectory that will be specific for each mobile robot type.
The target angular velocities of the wheels shown in Table A1 (Appendix A) are in revolutions per minute (rpm) because this unit is normally used by the PIDs controlling the angular rotational velocity of the motors of the mobile robot. The calibration trajectories comprise straight displacements (Figure 9, red line labeled with an R followed with a number), clockwise displacements (blue line labeled with a B followed with a number), and counterclockwise displacements (green line labeled with a G followed with a number). These 36 combinations of angular rotational velocities of the wheels are a short representation of the infinite set of possible motion combinations. The linear displacement of all trajectories has been limited to 1 m in order to generate a characteristic and easy to remember flower-shaped figure. In this paper, each trajectory has been repeated and registered 10 times in a total of 360 trajectory experiments. Each trajectory register contains the sequence of instantaneous angular velocities of the three wheels , where is the number of samples available; the vector containing the position of the mobile robot estimated by the odometry ; and the vector containing the ground truth position estimated by the SLAM procedure.
The adequacy of the trajectories proposed in Figure 9 to the calibration of the odometry mobile robot APR-02 will be evaluated in the following section.

3.3. Discussion of the Results Obtained with the Odometry Calibration Strategies

This paper proposes a general procedure to evaluate and correct the systematic odometry errors of a real three-wheeled omnidirectional mobile robot (1.760 m, 30 Kg) designed as a versatile personal assistant tool. This procedure is based on the definition of 36 representative straight and curved calibration trajectories which together depict a characteristic flower-shaped figure.
The odometry and ground truth trajectories measured while performing each one of these calibration trajectories are measured and registered for later offline fitting of the kinematic parameters of the mobile robot in order to match these two trajectories. This paper has evaluated the use of different trajectory subsets and the use of two iterative matching strategies based on gradient search minimization and genetic algorithms. The best matching between odometry and ground truth trajectories has been obtained using genetic algorithms and five repetitions of all calibration trajectories. The fitting of the kinematic parameters has shown differences higher than 10% in the distance from the wheels to the center of the mobile robot and between 2 and 5% in the radii of the wheels . This approach has the advantage of the feasible physical interpretation of the fitting results in the omnidirectional mobile robot.
The fitting results have been validated with five new additional repetitions of all these measured trajectories, providing an average improvement of 82% in the evaluation of the multivariable cost function that compares the final position and orientation of the mobile robot. The best performances of the genetic algorithm agree with the results of Savaee et al. [15], and confirm that the mutation and combinations generated during the search based on genetic algorithms has the best chance to detect the global minimum of the multivariate function that summarizes the differences between the odometry and ground truth trajectories of the mobile robot. In this case, the genetic algorithm search (strategy STE-GA5) required 187 iterations and 37.545 function counts to meet the stopping criteria.
The final conclusion of the comparative calibration analysis performed in this work is that the use of curved calibration trajectories is more representative to calibrate the kinematic parameters of an omnidirectional mobile robot. This conclusion agrees with Batlle et al. [17], who proposed the use of four curved trajectories for general omnidirectional mobile robot calibration, and with Maddahi et al. [11], who concluded that the performance of a calibration procedure depends on the type of trajectory analyzed.
Future works will analyze the application of this procedure to different units of the same mobile robot type in order to validate its application in a general manufacturing stage. 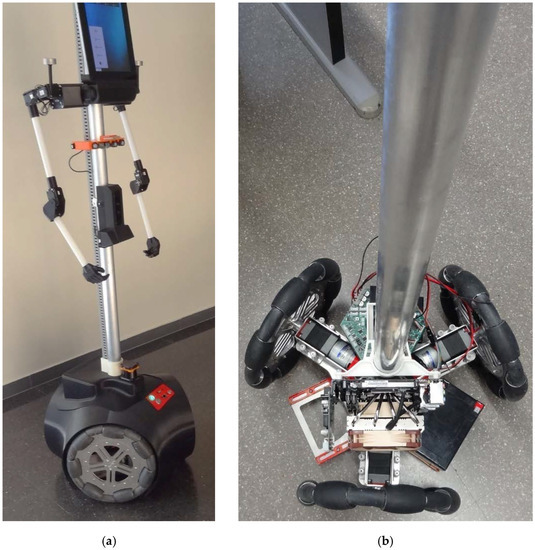 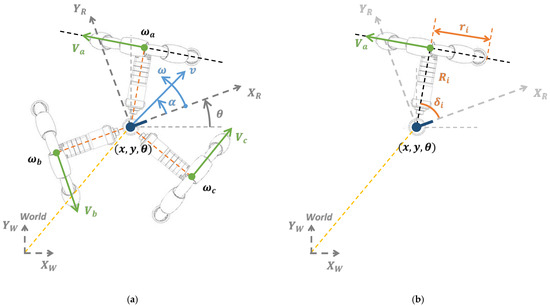 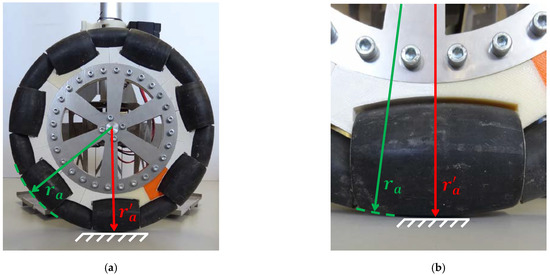 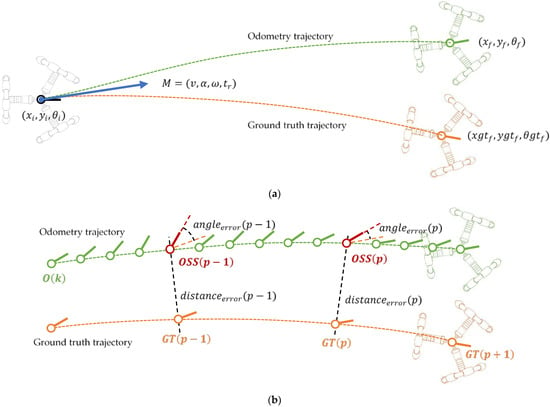 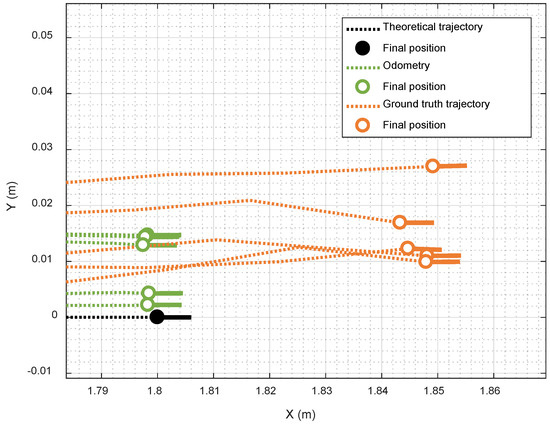 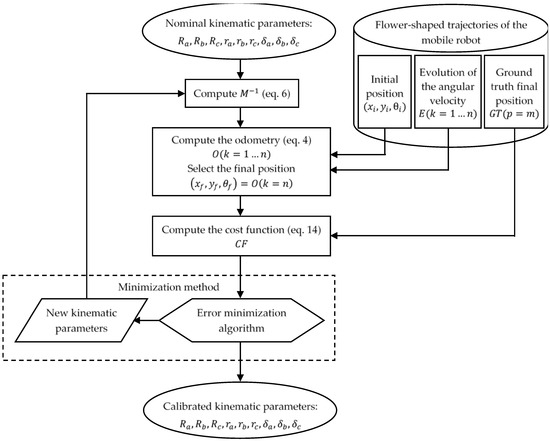 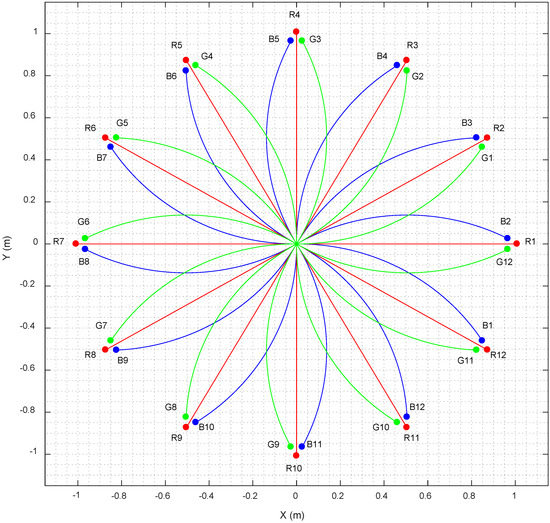