An electrically heated blackbody radiation source comprising thin metal film on a dielectric substrate and an integrating cavity was designed, fabricated, and experimentally studied at frequencies from 75 to 500 GHz. Analytical and numerical modeling were performed to optimize the emissivity, spectral uniformity, and modulation frequency of the radiation source with the spherical integrating cavity and thin film absorber. The blackbody emissivity (absorptivity) increased from 0.3 to 0.5 for the bare thin film on dielectric substrate, and up to 0.95 when it was placed inside the integrating cavity. The fabricated source mounted at the 0.5 K stage was used to measure the response time of a few microseconds and for sensitivity measurement down to 10−18 W/Hz1/2 of the superconductor–insulator–normal metal–insulator–superconductor (SINIS) detector at 100 mK.
Keywords:
blackbody; cryogenic temperature; thin film; superconducting receiver

In developing and calibrating cryogenic receivers in the terahertz and sub-terahertz frequency range, illumination from an ideal source (blackbody, BB) with exactly known power spectral density is required. The need for a submillimeter-wave photon source with a 10% fractional bandwidth cannot be met by using a room temperature source with attenuation to the required power level, since the process requires the suppression of thermal background radiation and the setting of the radiation temperature with high accuracy. These tasks can be addressed by using a reference absorber mounted inside the cryostat to decrease losses and reflections. The simplest solution to this problem may be to use thin resistive metal film in the input aperture of the receiver or corner reflector with radio absorption coating. A fairly extensive overview of the materials (black surfaces) used in space IR instruments with different purposes is given in [1]. Nowadays, the “blackest” material is Vantablack [2], with absorption of 99.965% in the optical range, comprising specially grown arrays of nanotubes. However, the price of such material is rather high, its temperature cannot be electrically modulated, and its operation at temperatures below 1 K is unpredictable. A simple and cheap method of creating a compact cooled BB is to deposit a thin film on a dielectric substrate. For example, a calibrator developed as a submillimeter radiation source made of nichrome thin film on a sapphire substrate is presented in [3,4]. For bulk sources, a suitable material is silicon or silicon carbide. Such a device comprises a pyramidal moth-eye structure [5]. Ferrite is another option, but both silicon carbide and ferrite are bulky, heavy, and slow to change temperature.

This paper presents an analysis of the performance of a simple blackbody source comprising a thin metal film on a dielectric substrate, demonstrating that emissivity even in the best case is in the range of 0.3–0.5, which leads to overestimation of incident power. The practical solution to improve the accuracy of the BB radiation source is to place it in the integrating cavity, which can be spherical with waveguide output or back-to-back horn for a quasioptical beamguide. Fast electric modulation of radiation temperature can be managed by deposition of such absorber/heater on sapphire substrate with a proper heat sink that provides modulation frequency up to 1 kHz.

The calculations and measurements presented in this paper demonstrate that using a simple blackbody radiation source in the form of a thin film on a silicon or sapphire substrate can lead to overestimation of the level of received radiation. The experimental values of emissivity were in the range of 0.2–0.5. A thin metal film with square resistance of 30–300 Ω was too thin relative to the skin depth. This means that more than 90% of the power passes through the film and is reflected from two boundaries of the vacuum–substrate and substrate–vacuum interface. A practical method of increasing absorption (emission) could be to use an integrating cavity in which there are multiple reflections of radiation from the conducting walls, accompanied by multiple absorption in semitransparent film. Such a blackbody source could be used for internal calibration of superconducting receivers. Compared with a massive corner reflector, the power of such a source could be modulated with a frequency up to 1 kHz, which makes it possible to use lock-in detection and significantly increase the signal-to-noise ratio and accuracy of measurement at the ultimate low-signal level.

Numerical calculations and modeling were supported by a grant from the Russian Science Foundation 21-42-04421. The manufacture of blackbody samples with NiCr film was carried out as part of the state assignment of the IRE RAS № FFWZ 2022-0005 using the equipment of USU “Cryointegral”, which is supported by a grant from the Ministry of Science and Higher Education of the Russian Federation, agreement No. 075-15-2021-667. Low-temperature experiment was carried out within state assignment of the IAP RAS (No. 0030-2021-0005). 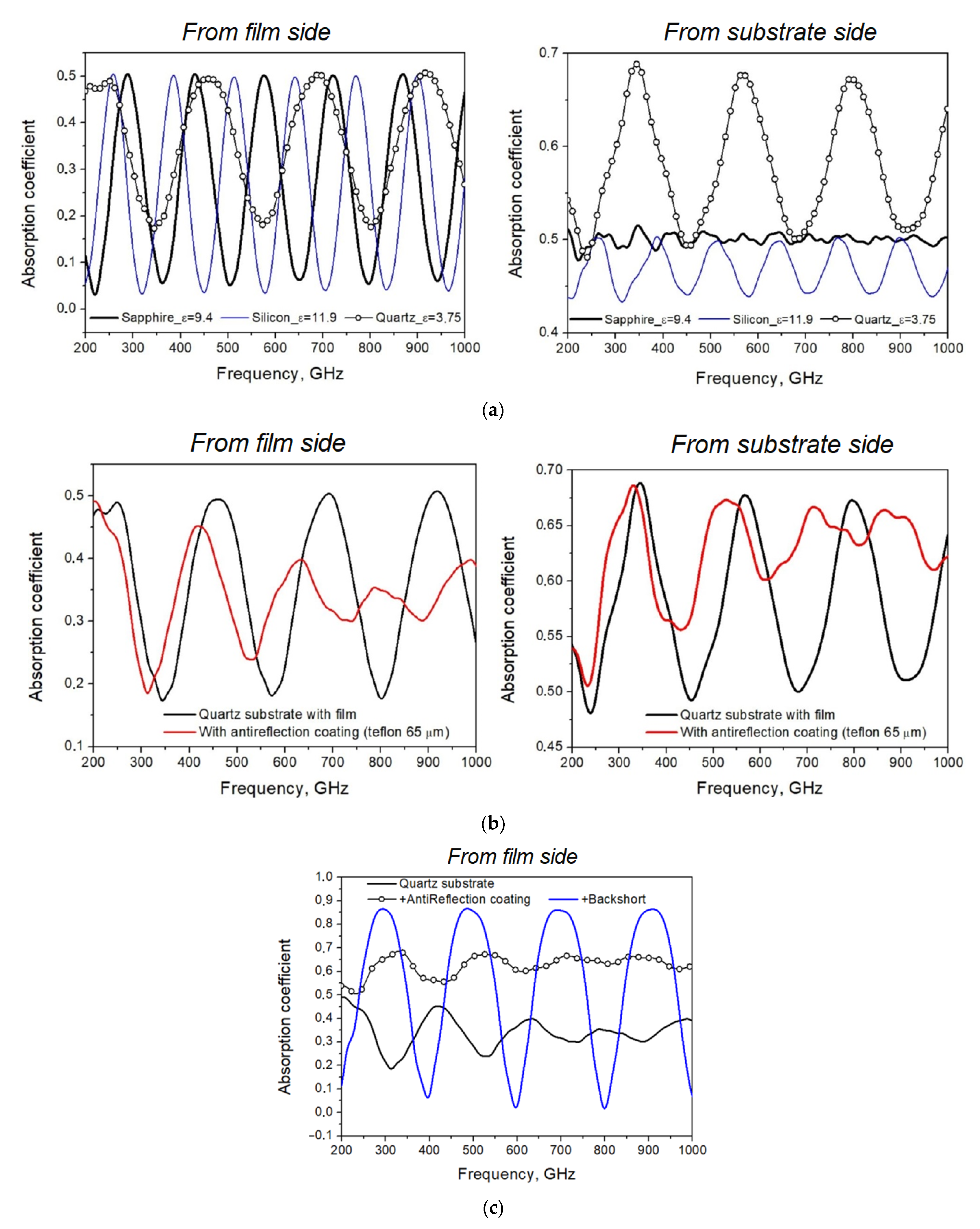 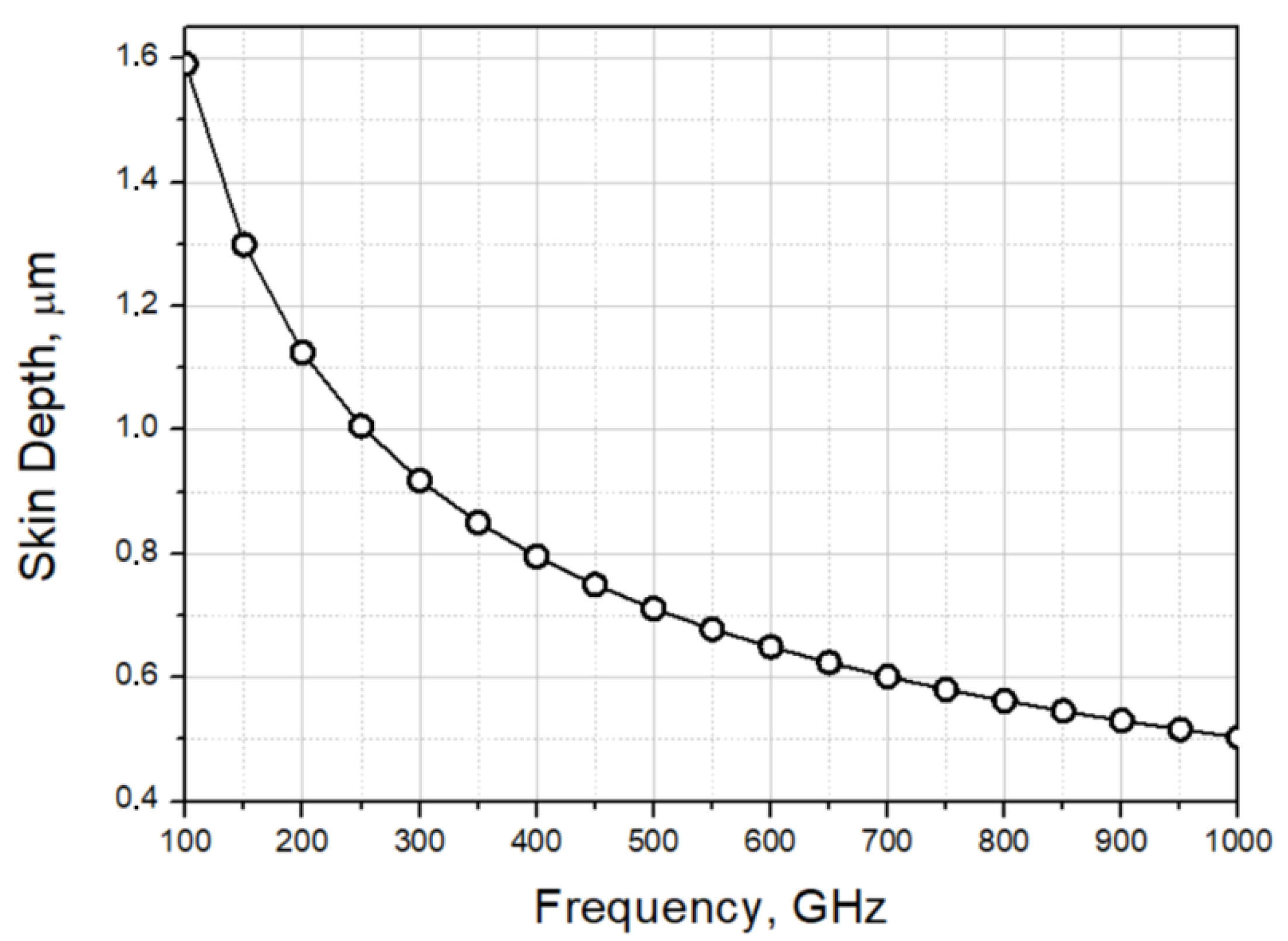 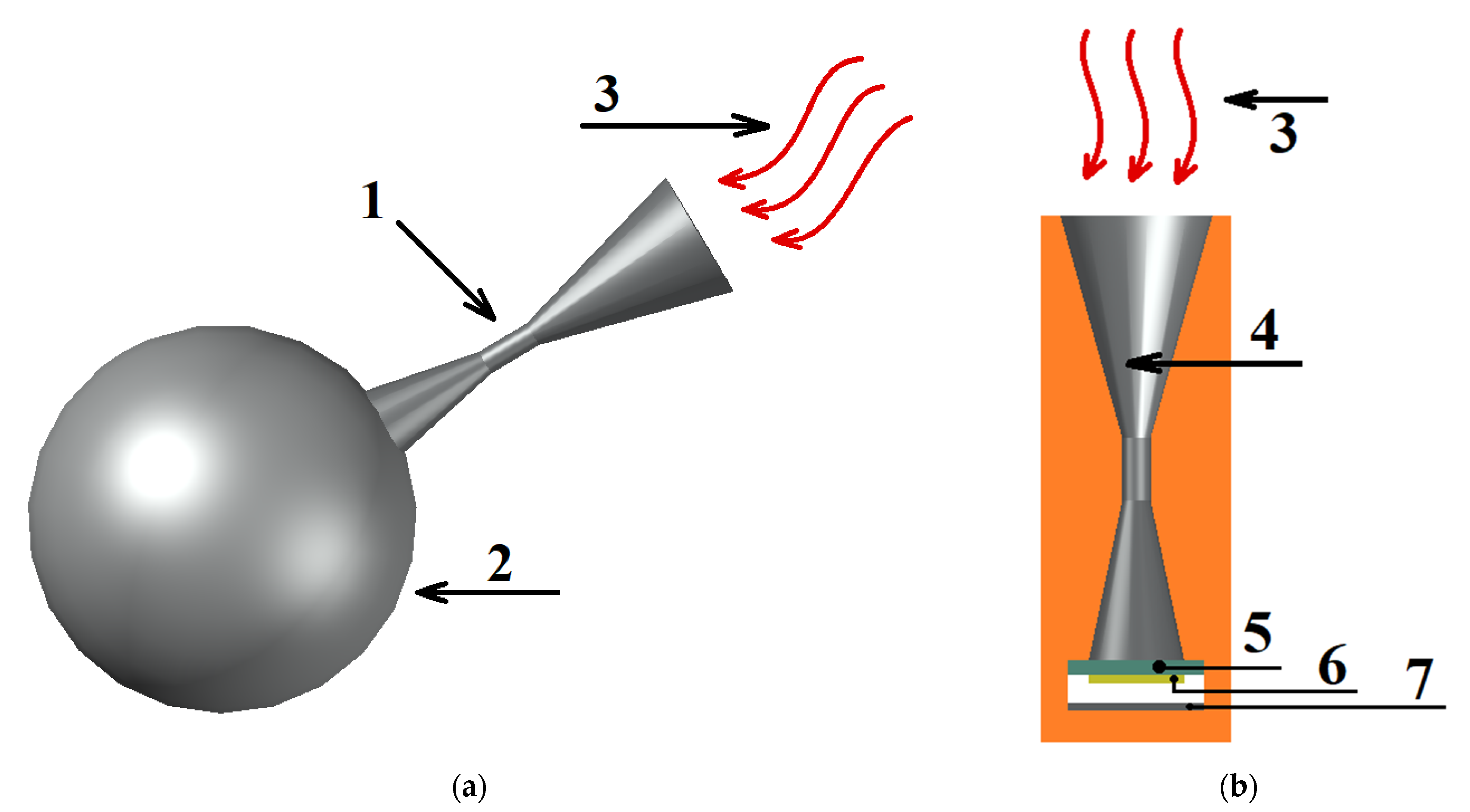 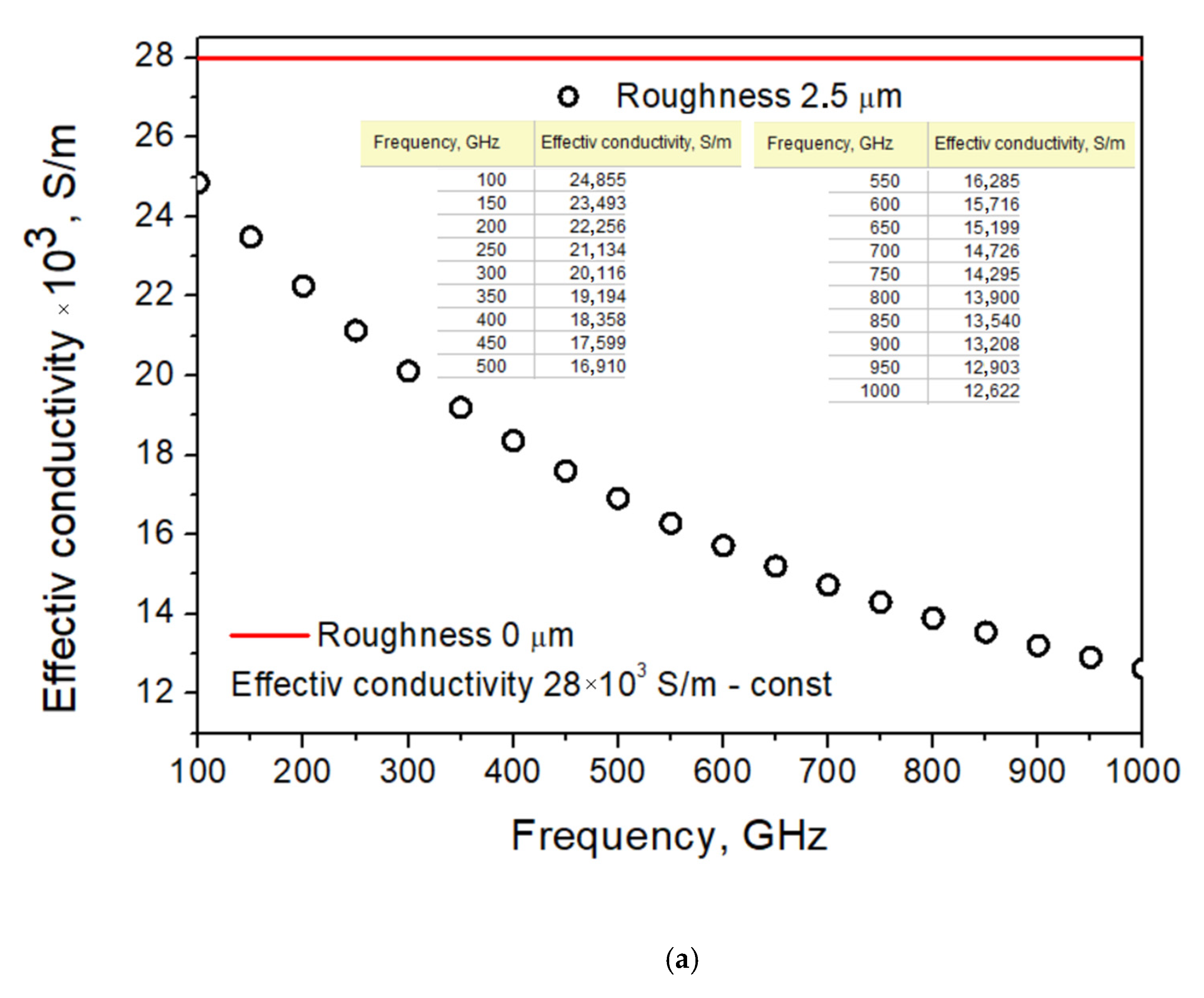 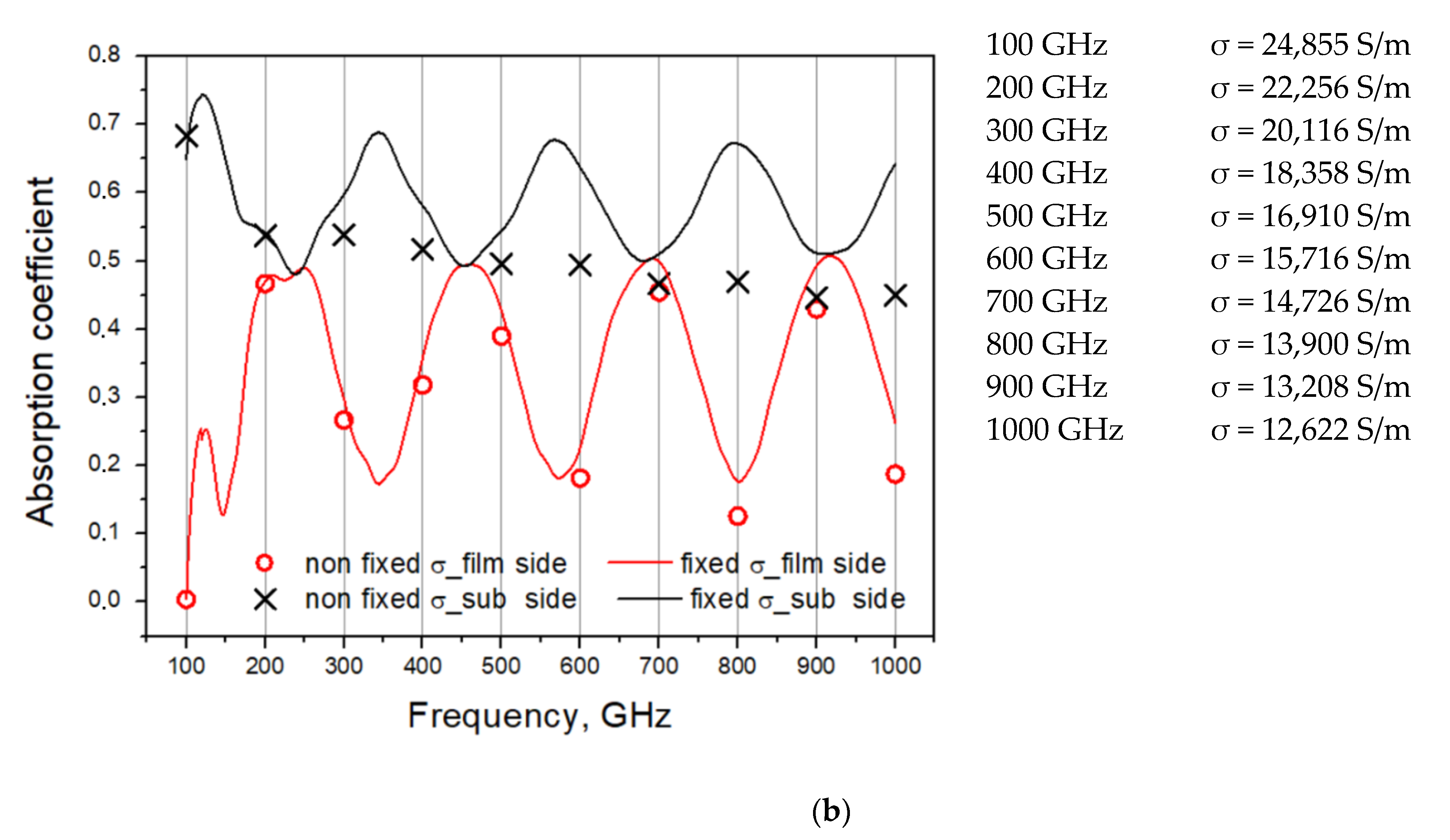 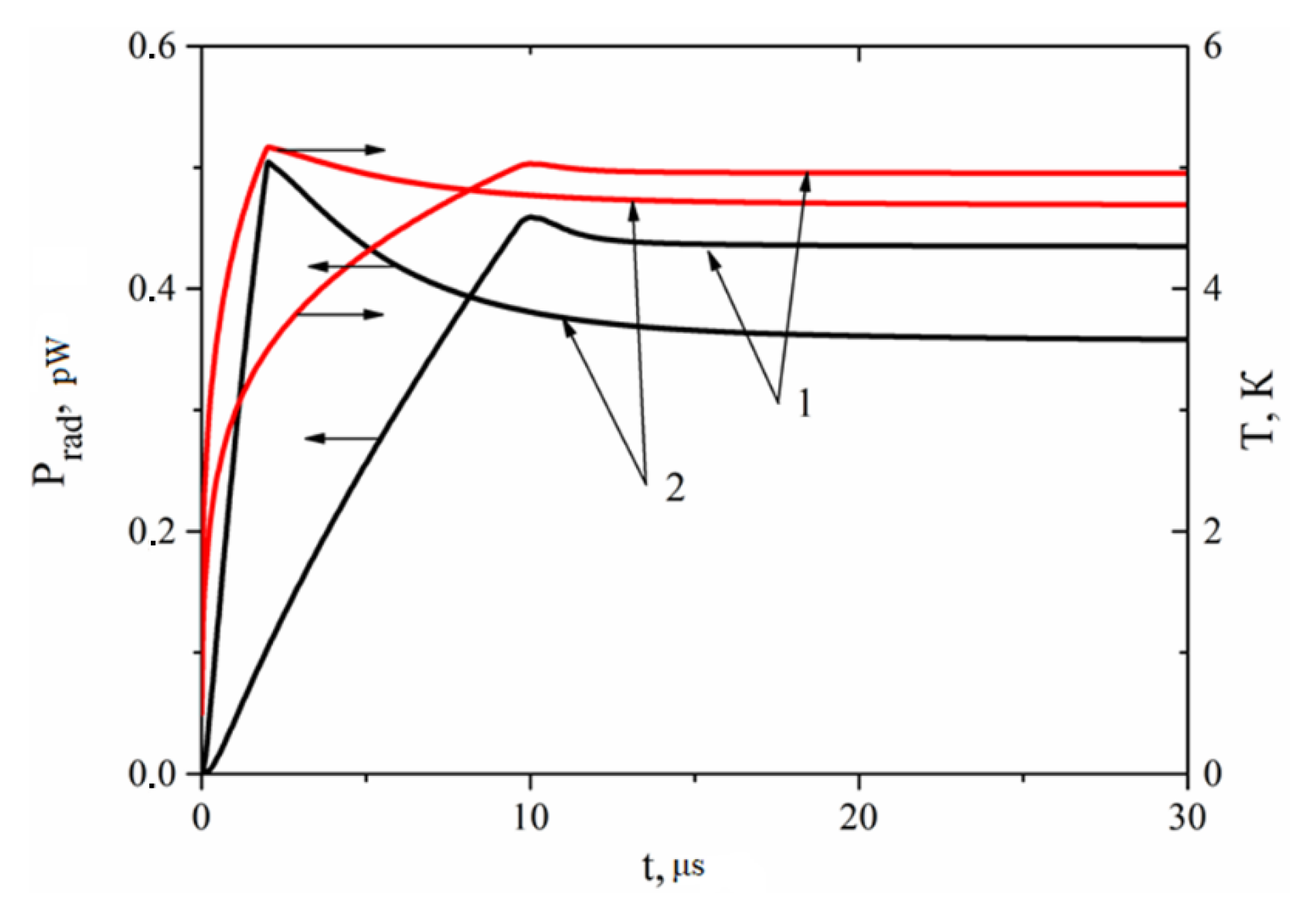