Nitrogen dioxide (NO) is a major tropospheric air pollutant. Its concentration in the atmosphere is most frequently monitored indirectly by chemiluminescence detection or using direct light absorption in the visible range. Both techniques are subject to known biases from other trace gases (including water vapor), making accurate measurements at low concentration very challenging. Selective measurements of NO in the mid-infrared have been proposed as a promising alternative, but field deployments and comparisons with established techniques remain sparse. Here, we describe the development and validation of a quantum cascade laser-based spectrometer (QCLAS). It relies on a custom-made astigmatic multipass absorption cell and a recently developed low heat dissipation laser driving and a FPGA based data acquisition approach. We demonstrate a sub-pptv precision (1 ) for NO after 150 s integration time. The instrument performance in terms of long-term stability, linearity and field operation capability was assessed in the laboratory and during a two-week inter-comparison campaign at a suburban air pollution monitoring station. Four NO instruments corresponding to three different detection techniques (chemiluminescence detection (CLD), cavity-attenuated phase shift (CAPS) spectroscopy and QCLAS) were deployed after calibrating them with three different referencing methods: gas-phase titration of NO, dynamic high-concentration cylinder dilution and permeation. These measurements show that QCLAS is an attractive alternative for high-precision NO monitoring. Used in dual-laser configuration, its capabilities can be extended to NO, thus allowing for unambiguous quantification of nitrogen oxides (NO), which are of key importance in air quality assessments. View Full-Text
Keywords: air pollution; trace gas; nitrogen dioxide; laser spectroscopy; mid-infrared; quantum cascade laser; selective detection air pollution; trace gas; nitrogen dioxide; laser spectroscopy; mid-infrared; quantum cascade laser; selective detection
►▼ Show Figures 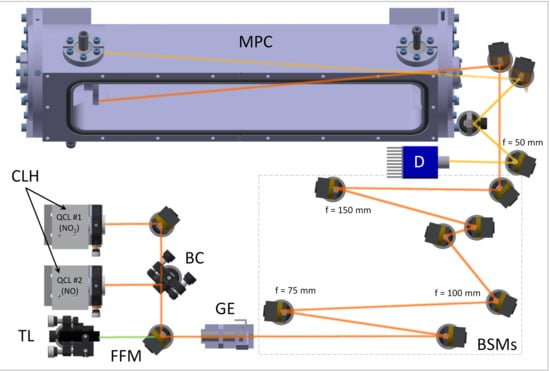