The application of radiofrequency neurectomy on the masseteric nerve has steadily increased and is now widely used for cosmetic purposes such as reduction of masseter muscle hypertrophy. Furthermore, attempts have been made to apply masseteric nerve neurectomy for the treatment of temporomandibular disorders (TMD). As the number of cases grow, related side-effects and medical disputes are also increasing [1].
Initially, radiofrequency neurectomy was developed as a method to relieve symptoms by blocking sensory nerves that cause pain in chronic pain patients [2]. Sweet and Wepsic used radiofrequency on the Gasserian ganglion with a percutaneous approach for the treatment of trigeminal neuralgia [3]. Nugent and Berry described detailed surgical methods for the treatment of trigeminal neuralgia based on radiofrequency coagulation [4]. Since then, its application has been widened to include motor nerves. Kasdon and Lathi used radiofrequency for the treatment of posttraumatic spasticity [5].
At the early stage of development, masseter muscle reduction was performed by coagulating and causing necrosis of the involved masseter muscle using radiofrequency [2]. Afterwards the procedure has developed into a type of neurectomy that blocks nerve-muscle communication through the application of radiofrequency with a nerve stimulator device that can search for motor nerves within the muscle [2]. Compared to electric cautery which is done with electrosurgical devices and surgical lasers that directly transmit high output heat to destroy tissue, alternating current radiofrequency devices induce ionic agitation to the tissue, which continually generates frictional heat in the tissue itself. The tissue is coagulated by this secondary heat energy [6].
A previous paper reported that side-effects due to muscle tissue damage were less with radiofrequency neurectomy since the technique only thermally coagulates motor nerves innervating the muscle itself and the therapeutic duration is longer compared to that resulting from botulinum toxin injection. However, related reports are relatively sparse in spite of the increasing number of complaints of side-effects after masseteric nerve neurectomy [2].
Therefore, in this case series we will present 2 cases consisting of various symptoms in relation to the radiofrequency neurectomy procedure that was done on the masseteric nerve, along with other relevant clinical characteristics. The case series also includes a literature review on the few studies that report on radiofrequency neurectomy of the masseteric nerve. The details provided in this article will help clinicians to understand possible side-effects that are specific to the procedure and distribute measures to be taken during the diagnostic process for appropriate patient selection and prevention and alleviation of possible side-effects including aggravation of TMD symptoms.

A 21-year-old male patient visited the orofacial pain clinic of our dental hospital with the chief complaint of complications occurring after masseteric nerve neurectomy using radiofrequency which he had received 11 days ago. He had been suffering from neck and shoulder pain since 4 years ago. Starting from 3 weeks ago, he experienced the pain intensifying when he was trying to concentrate on his work. Two weeks ago, he visited an orthopedic clinic and had magnetic resonance imaging (MRI) of the cervical area. The orthopedic surgeon confirmed that there was no disc disorder of the neck. Eleven days ago, he visited a private dental clinic and was diagnosed with disc displacement of the temporomandibular joint (TMJ) after clinical and radiographic examinations. Joint sounds were present on mouth opening at that time. Following diagnosis, masseteric nerve neurectomy was suggested as treatment and conducted. One week ago the patient experienced a decrease in the intensity of neck and shoulder pain after the treatment. When he first visited our clinic, the patient complained of swelling of both cheeks, dizziness, and generalized lethargy.

Clinical examinations were based on the Diagnostic Criteria for TMD (DC/TMD) [7]. Mouth opening limitation was observed along with local heat and mild swelling in both masseter muscle areas. Comfortable mouth opening (measured between the incisal edge of the upper and lower central incisors and the amount of overbite added) was 30 mm and maximum mouth opening was 33 mm accompanied by pain in both masseter muscles. The mandibular movement path showed S-shaped deviation on mouth opening. The patient did not report pain on palpation of the TMJ capsule area. When masticatory and cervical muscles were palpated the patient reported tenderness of both masseters, the left sternocleidomastoid, the left trapezius, and the left splenius capitis muscle. The patient also reported pain of the left TMJ area when performing eccentric movements to the right. He reported parafunctions including clenching, enjoying hard food, unilateral sleep, indigestion, and bad body posture. He was undergoing orthodontic treatment to correct malocclusion which had started before the neurectomy procedure. Examination of the occlusion showed all premolar and molar teeth firmly occluding in maximum intercuspal position. The upper first premolars of both sides had been extracted for orthodontic reasons. Blood tests with complete blood cell count and differential and blood chemistry showed an increase in segmental neutrophil, absolute neutrophil count, and total protein, while showing a decrease in lymphocyte and eosinophil counts. The erythrocyte sedimentation rate was within normal range. All subcategory scores of the Symptom Checklist-90-Revised (SCL-90-R) were within normal range [8].

A 28-year-old male patient visited the orofacial pain clinic of our dental hospital with the chief complaint of occlusal discomfort which he described as a sensation of the mandible being positioned forward and teeth not occluding properly. He had persistently felt waxing and waning stiffness and discomfort in the left TMJ area when chewing. He also reported neck and shoulder pain which had started 2 years ago. The patient visited a private dental clinic 1 year ago for the treatment of symptoms occurring in the TMJ area. At that point masseteric nerve neurectomy with radiofrequency was suggested and subsequently conducted. He had experienced occlusal discomfort following the procedure.

On the TMJ cone-beam computed tomography (CBCT) taken 6 months before the first visit to our clinic, the right TMJ condyle appeared to show signs of incipient degenerative change and the left condyle appeared to be at a more advanced stage of degenerative disease with signs of cortical erosion (Figure 4).
Plain radiographs taken at the time of the patient’s first visit showed incipient degenerative change on the left condyle (Figure 5). On the CBCT and plain radiographs taken 8 months later following treatment, no further destructive change was observed (Figure 4). Based on the initial imaging results and clinical examination, the patient was diagnosed as having degenerative joint disease of the TMJ.

This research received no external funding and the APC was funded by Seoul National University.

The study was conducted according to the guidelines of the Declaration of Helsinki, and approved by the Institutional Review Board of Seoul National University Dental Hospital (protocol code #ERI 20028, date of approval 29 October 2020).

Patient consent was waived due to the fact that identifiable information was not included in the study.

The data that support the findings of this study are available on request from the corresponding author. The data are not publicly available due to privacy or ethical restrictions. 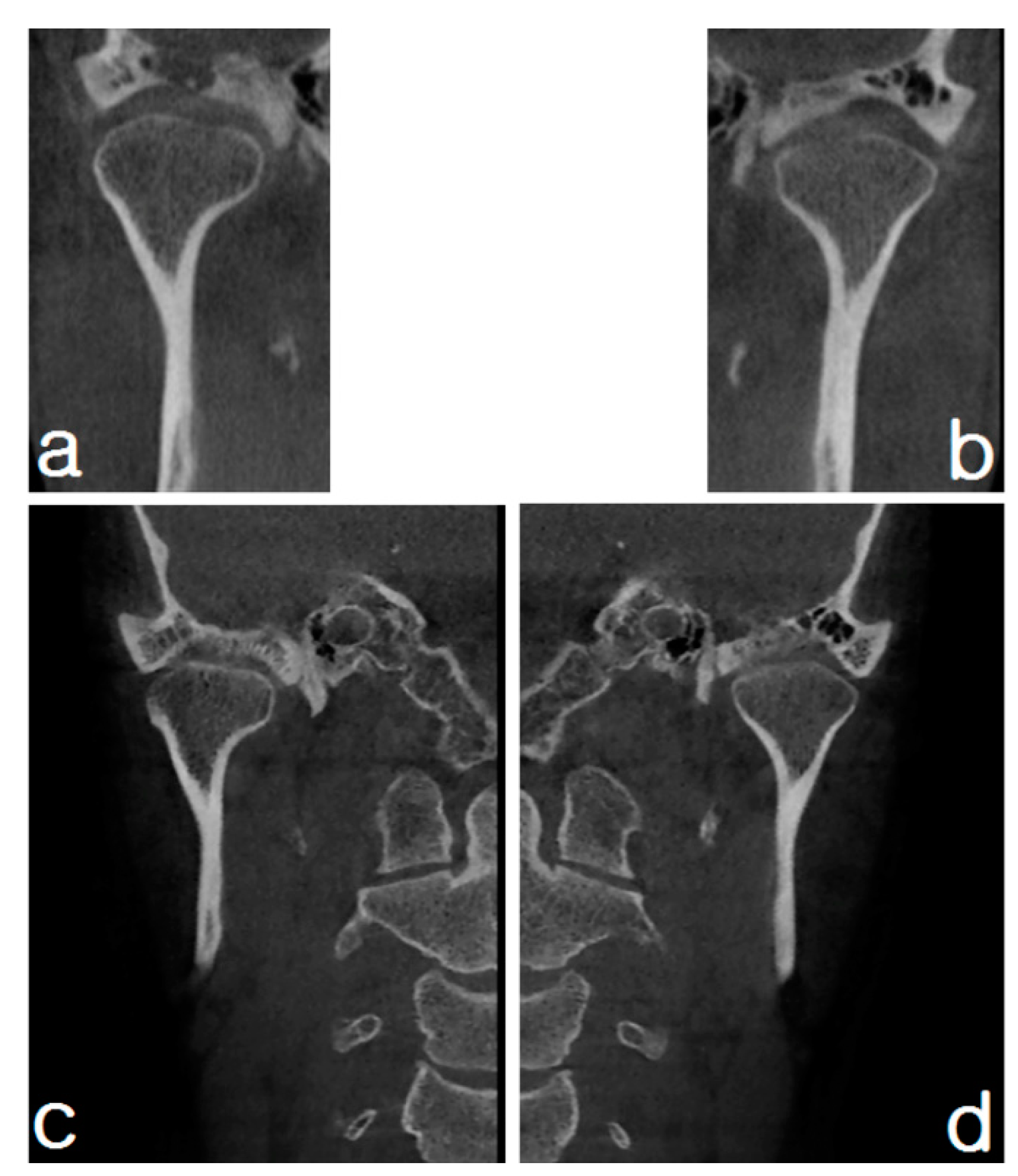