2.2. Calibration of Parameters and Model Validation

The parameters of constitutive models of soils are often obtained by comparing experimental results and numerical simulations using finite elements at the element test level [31]. In this study, experimental data from an undrained cyclic triaxial test are used to calibrate the parameter , and two methods for calibrating the parameters , , and are presented. First, the curve of the undrained Young’s modulus versus axial strain is drawn using the results obtained from the cyclic triaxial test and numerical simulations of the test to obtain the parameter. Second, data from a cyclic shear test and Ishibashi and Zhang’s equations [32] are used.
The values of the parameters such as the undrained shear strength (), maximum shear modulus () or shear wave velocity (), and curve of the undrained Young’s modulus versus axial strain ( Vs. ) are required to calibrate the parameters. A series of undrained cyclic triaxial and monotonic tests of kaolin clay were conducted by Wichtmann [33] in both stress and strain control modes and under different level stress amplitudes.
In this study, the results of monotonic and cyclic tests under the stress control condition with an effective mean pressure of 200 kPa are used to calibrate the constitutive model parameters. The process mentioned above, by which the parameters of the model are calibrated, is fully described below.

The undrained shear strength () is obtained from the results of a monotonic consolidated undrained triaxial test. Figure 4 shows the stress–strain relationship in the monotonic undrained triaxial test [33]. According to this figure and using the following equation, the maximum value of deviatoric stress and undrained shear strength can be calculated as follows (Equation (13)). where is the undrained shear strength, and are the maximum and minimum mean stress, respectively, and the deviatoric stress is .
The effective maximum yield stress considering the triaxial test condition is calculated as follows (the detailed expression can be found in Appendix B):
The effective maximum yield stress considering the pure shear test is calculated as follows:
The next parameter for calibration is . The first method of calibrating in the kinematic hardening model is based on the undrained cyclic triaxial test data. The deviatoric stress () versus axial strain () under the stress control condition at different stress amplitudes are plotted based on the simulation results of the undrained cyclic triaxial test, and similar to the experimental method, the undrained elastic modulus () of the second and fifth cycles of each test is obtained. Then, the curve of the undrained Young’s modulus versus axial strain is plotted for both the experimental data and simulation results to calibrate . The simulation results of the undrained cyclic triaxial test and their comparison with the experimental results are presented in Figure 3. Here, = 0.14 is found to provide a reasonable fit to the experimental results, where the simulation is performed using Abaqus software under the stress control condition.
If undrained cyclic triaxial test data are not available, the results of the cyclic shear test under the strain control condition and the Ishibashi and Zhang experimental equations using the plasticity index of soil are used to calibrate the parameter λ (second method). In this method, the curve data of shear modulus versus shear strain ( curve) is required to calibrate this parameter. Thus, the hysteresis loops of the cyclic shear test simulation in different strain amplitudes should first be plotted. For instance, the hysteresis loops of three different strain levels are shown in Figure 5. As can be seen, the value of the damping caused by the soil plasticity increases, and the shear modulus decreases if the strain levels are increased. Then, the shear modulus corresponding to the stabilized cycle is obtained for each strain amplitude to enable the plotting of the points to calibrate (see Figure 6). For example, the shear stress–strain loops of three strain amplitudes in Figure 5 correspond to the designated points in Figure 6. These two figures illustrate the validation of the kinematic hardening model against the published curve of Ishibashi and Zhang [32]. After calibration using this method, = 0.12 is obtained.
After determining the parameters , , and , the initial size of yield surface () is obtained from Equation (7) ().
The last parameter to be determined is the rate decrease of the kinematic hardening modulus (). According to Figure 1, the amount of effective maximum yield stress is determined by Equation (16):
Finally, from Equations (14)–(16), parameter is calculated according to Equations (17) and (18): (Triaxial test condition) (Simple pure shear test condition).
Generally, the triaxial test is an acceptable method for assessing the cyclic behavior of soils, and usually this test is used to calibrate the parameters of different constitutive models. Applying relatively simple boundary conditions and creating proper meshes in simulations of this test afford logical and reliable results. Thus, the results of the cyclic triaxial test using nonlinear kinematic hardening and Mohr–Coulomb models on a clay sample are compared with the experimental model results to validate and investigate the kinematic hardening constitutive model. This test is modeled in the 2D axisymmetric case to achieve acceptable results. Application of a 200 kPa confining pressure is simulated as a uniformly distributed load applied normally inward to all external elements around the specimen; then, the cyclic load () is applied to the top of the sample.
In the Mohr–Coulomb model, since the test is carried out in an undrained condition (i.e., an undrained cyclic triaxial test), the internal friction angle of soil () is zero and the cohesion value () equals the undrained shear strength of soil (). Figure 7 shows the comparison of deviatoric stress versus axial strain in numerical simulations (kinematic hardening model and Mohr–Coulomb) with the experimental results in stress control mode. As shown in the diagrams, the behavior of undrained soils using the kinematic hardening model is in relatively good agreement with the results obtained from the experimental test, while the Mohr–Coulomb model fails to create the hysteresis loops, and the results thus differ from the experimental results. In addition, the material behavior in the Mohr–Coulomb model is in the elastic range.
It is worth noting that this numerical simulation for the Mohr–Coulomb model is performed in two modes without considering and taking into account the damping ratios, and the results of the two cases are similar, which indicates that the linear elastic–perfectly plastic Mohr–Coulomb model cannot accurately predict the soil behavior under cyclic loading. In contrast, the kinematic model is capable of creating hysteresis loops and considers the soil stiffness degradation as the number of loading cycles increases. As shown in Figure 7, the undrained Young’s modulus ratio of the numerical model to the experimental model () increases with an increasing number of loading cycles, so that in the last cycle, it reaches its maximum value of approximately 1.4. Thus, a numerical model generally overestimates the soil stiffness degradation. The experimental curves in Figure 7 are related to tests C7 and C8.
Finally, after calibrating and using the corresponding equations, the values of the different hardening parameters are calculated for all five soil layers (see Figure 8). Thus, the values of the constitutive model parameters used in all of the analyses can be calibrated according to the second method (Table 1).

As previously mentioned, many factors—such as the type and thickness of soil, shape, dimensions, and depth of a tunnel, as well as earthquake intensity—affect the seismic response of a tunnel to an earthquake. In this study, we aim to examine the effect of these factors on the seismic behavior of a tunnel and compare the results with those from previous studies performed using a linear elastic–perfectly plastic Mohr–Coulomb model [29]. In all of the studied models, five layers of soft soil are used with different characteristics and various thicknesses of 29.2 m, 19.6 m, 16 m, 7.2 m, and 3 m, corresponding to structural layers from bedrock to the soil surface, respectively. The schematic configuration of the models, including the soil layers and tunnel used in all of the analyses, is given in Figure 8, and the properties of the clay soils used in this study are summarized in Table 2.
A circular tunnel with a diameter of 6 m and a square tunnel with a length of 5.3 m are used to investigate the effect of the shape of the tunnel on the dynamic response. Different tunnel-lining thicknesses of the circular tunnel are also considered to study the effect of lining thickness on the seismic response. The properties of the concrete used in the tunnel lining are given in Table 3.
One of the factors affecting the seismic behavior of a tunnel is the intensity of the earthquake force imposed on the soil–tunnel model. The earthquake load applied to the base of models is that of the 1995 Kobe earthquake, i.e., 0.83 g PGA (peak ground acceleration) (as recorded at KJMA station); then, this is scaled down to 0.4 g to investigate the effect of this parameter on the dynamic soil–tunnel behavior. There are various methods [35,36,37,38,39] used for the boundary conditions of models to ensure that these conditions prevent the return of earthquake waves, and we use the viscous spring boundary method to surround our soil models. The acceleration time history of the Kobe earthquake, and the power amplitude and Fourier amplitude spectra used in this study, are presented in Figure 9.

The use of advanced constitutive models is limited in practice due to the difficulty in calibrating several constitutive parameters. Here, a linear elastic model is used for tunnels, and a linear elastic–perfectly plastic Mohr–Coulomb model and a nonlinear kinematic hardening model are used as advanced constitutive models for clay soil. Two different methods—one using data from a cyclic shear test simulation and the experimental curve of Ishibashi and Zhang [32] and the other using experimental data and some data from a simulation of an undrained cyclic triaxial test (which is a new method)—are used to calibrate the parameters of a kinematic hardening constitutive model. The results of this research can be summarized as follows.

The first author of this article is financially supported by Chines Government Scholarship (CSC). 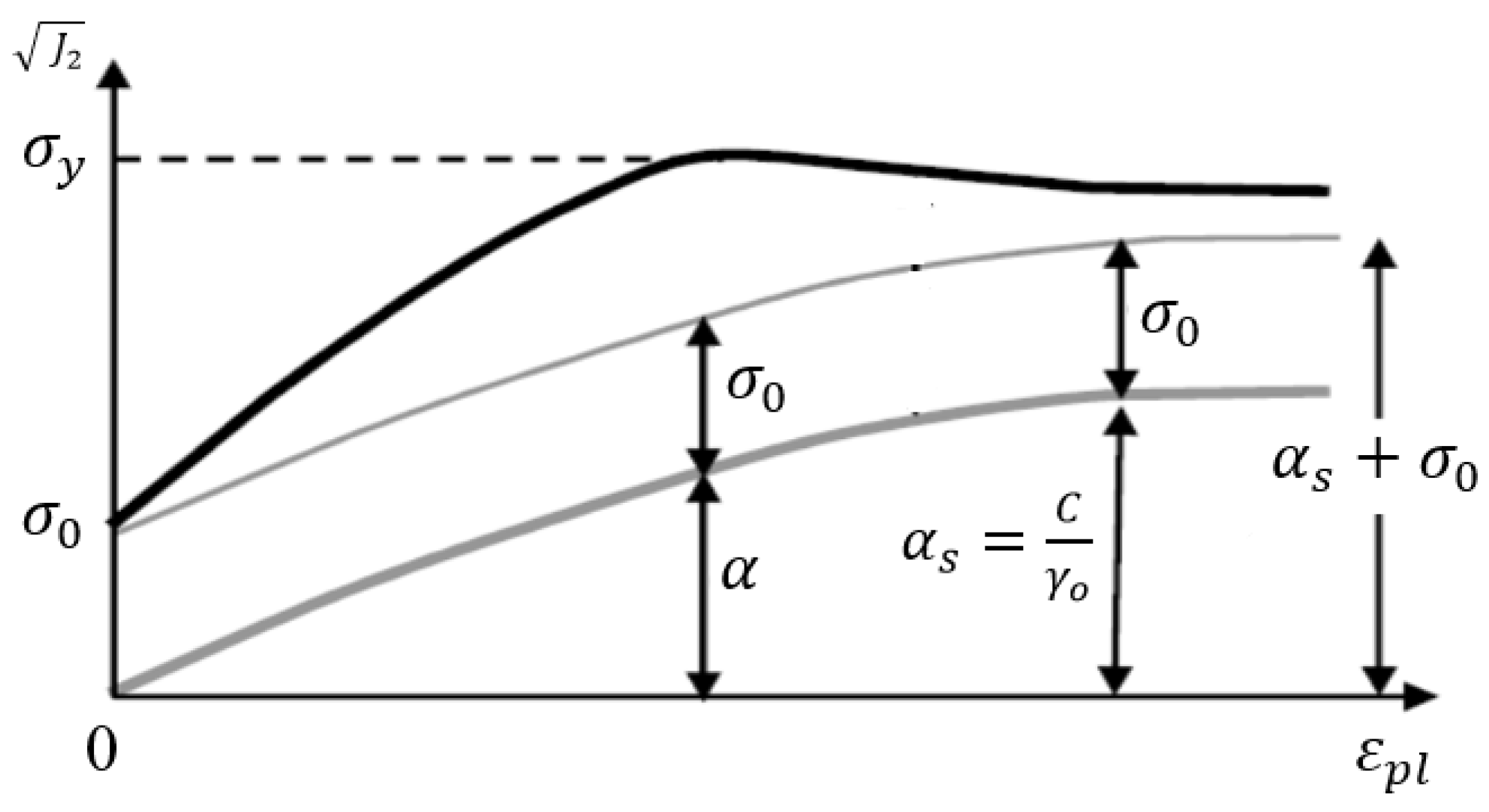 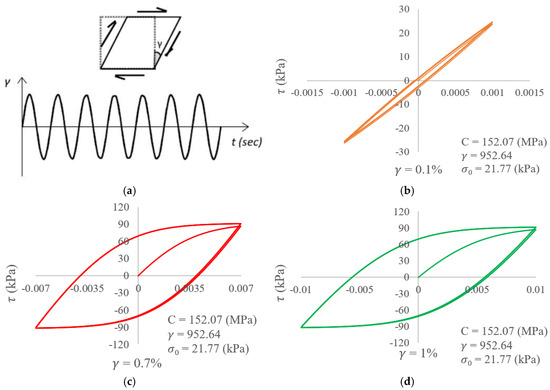 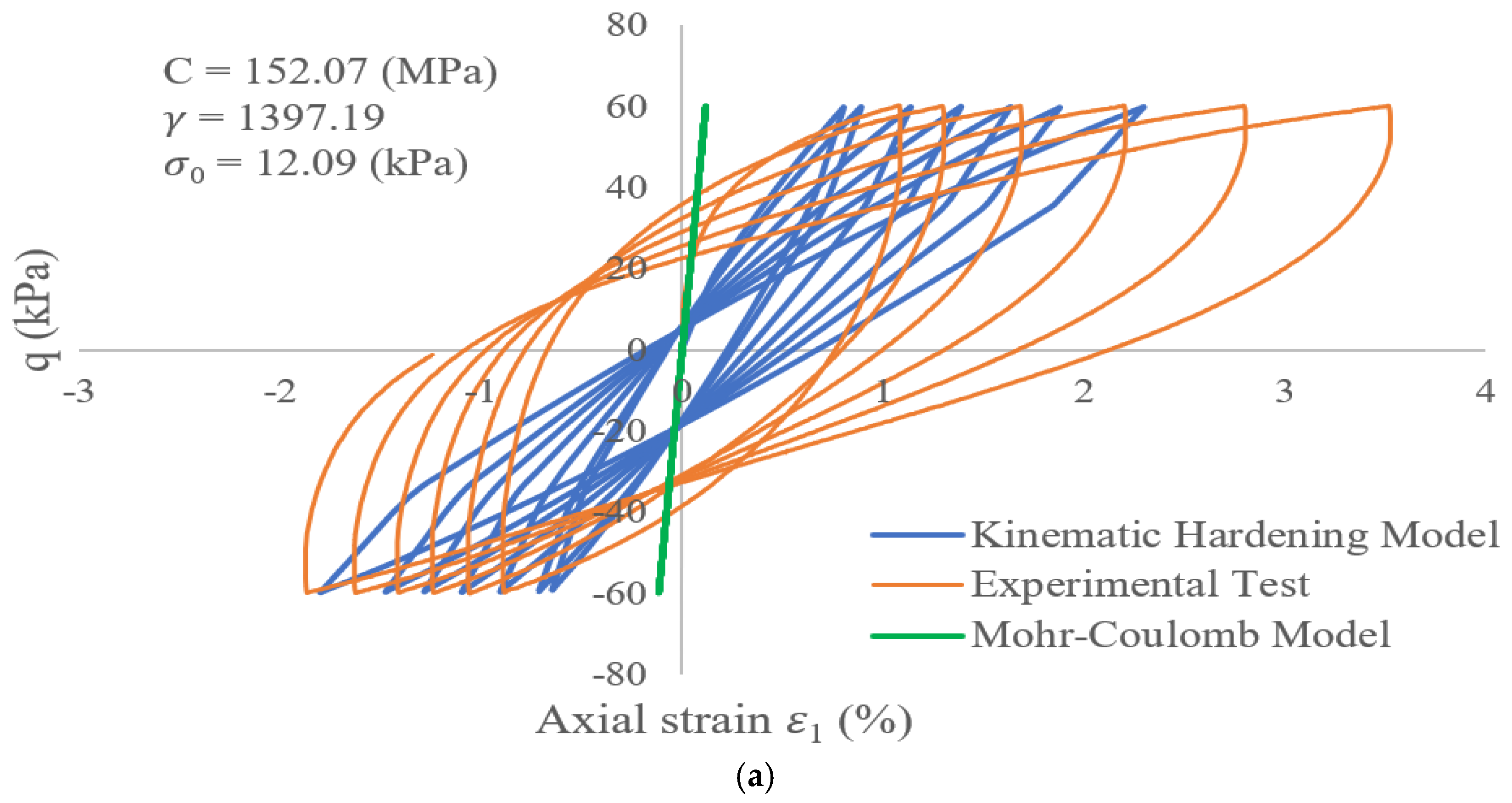 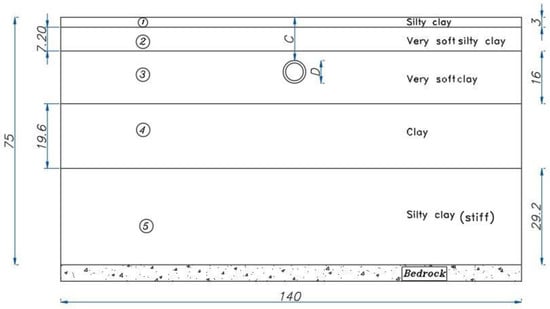 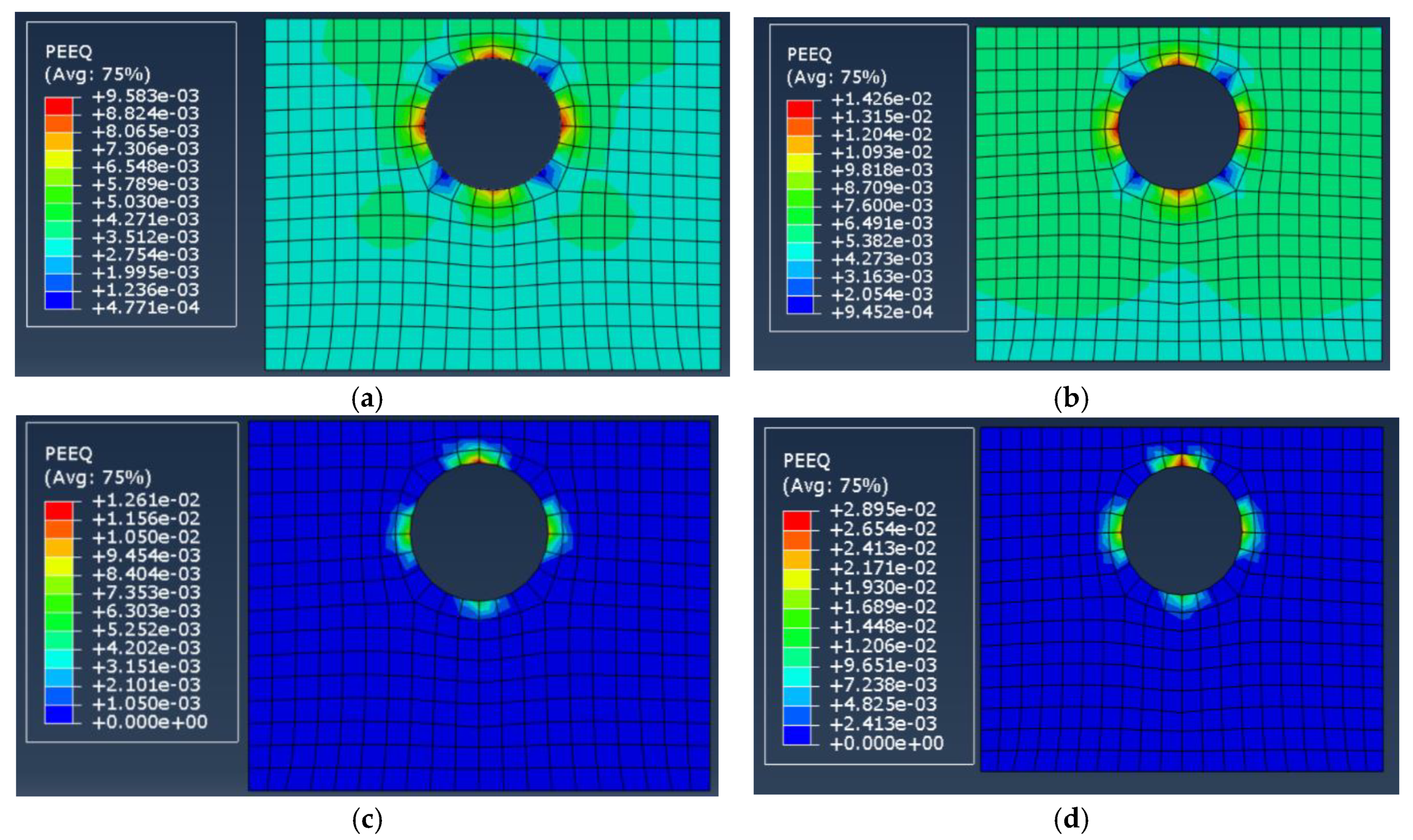 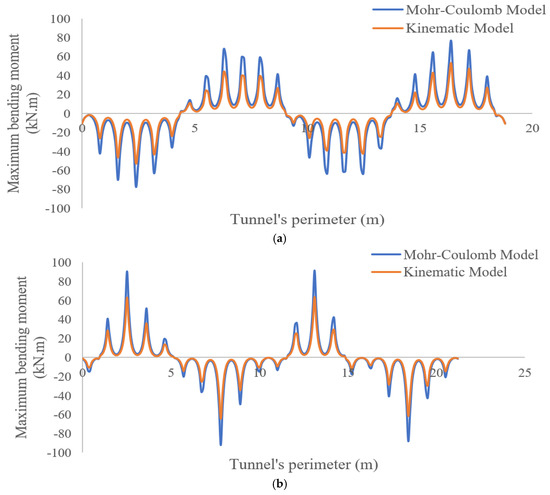 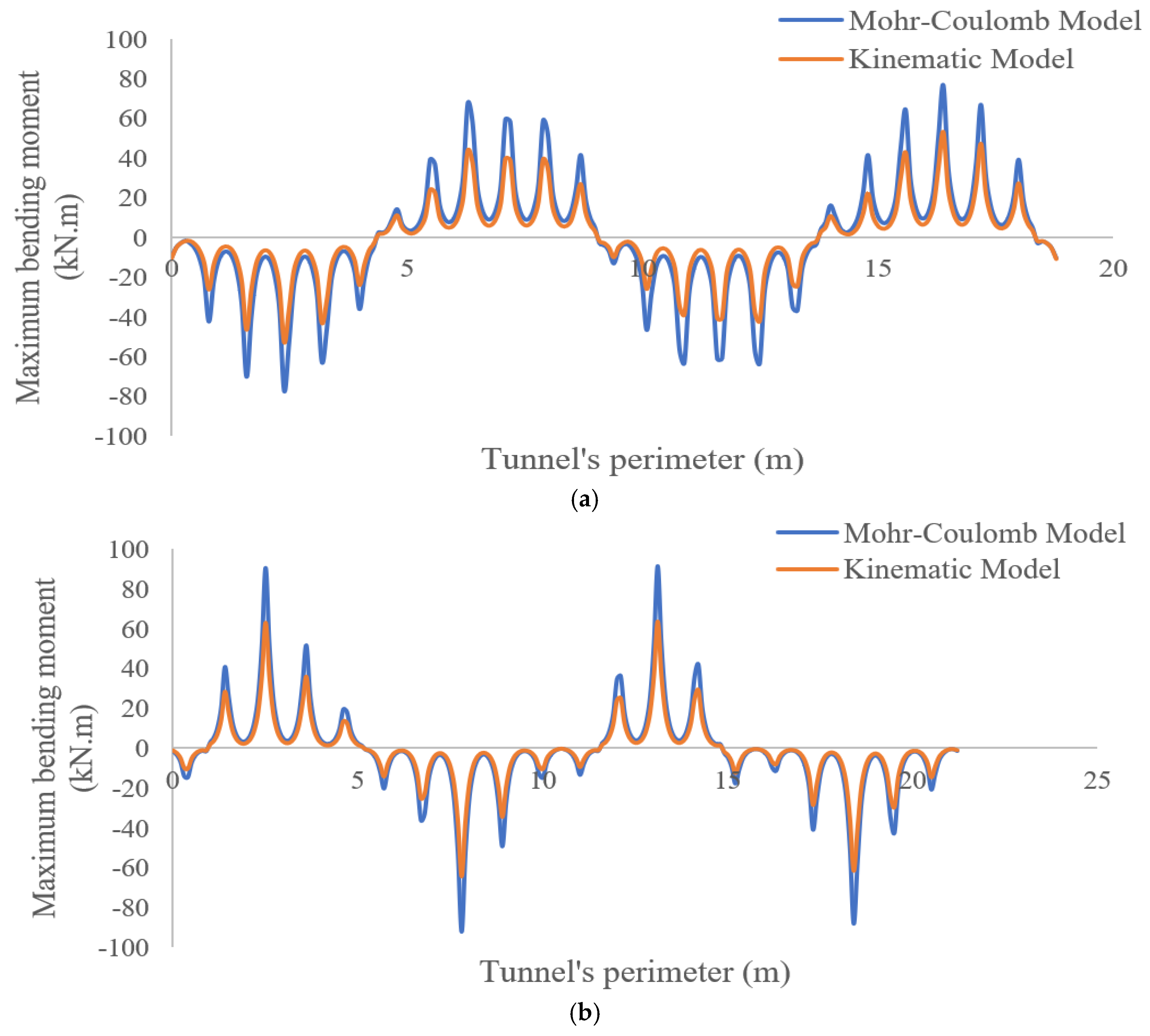