In the development of atomic, molecular, and optical (AMO) physics, atom-ion hybrid systems are characterized by the presence of a new tool in the experimental AMO toolbox: atom-ion interactions. One of the main limitations in state-of-the-art atom-ion experiments is represented by the micromotion component of the ions’ dynamics in a Paul trap, as the presence of micromotion in atom-ion collisions results in a heating mechanism that prevents atom-ion mixtures from undergoing a coherent evolution. Here, we report the design and the simulation of a novel ion trapping setup especially conceived of for integration with an ultracold atoms experiment. The ion confinement is realized by using an electro-optical trap based on the combination of an optical and an electrostatic field, so that no micromotion component will be present in the ions’ dynamics. The confining optical field is generated by a deep optical lattice created at the crossing of a bow-tie cavity, while a static electric quadrupole ensures the ions’ confinement in the plane orthogonal to the optical lattice. The setup is also equipped with a Paul trap for cooling the ions produced by photoionization of a hot atomic beam, and the design of the two ion traps facilitates the swapping of the ions from the Paul trap to the electro-optical trap. View Full-Text
Keywords: Paul traps; ion optical trapping; atom-ion interactions; atom-ion mixtures Paul traps; ion optical trapping; atom-ion interactions; atom-ion mixtures
►▼ Show Figures 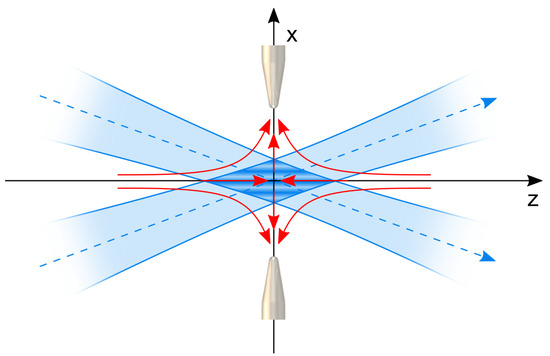