Development of a Multiscenario Planning Approach for Urban Drainage Systems

A traditional urban drainage system (UDS) planning approach generally considers the most probable future rainfall scenario. However, this single scenario (i.e., scenario-optimal) planning approach is prone to failure under recent climatic conditions, which involve increasing levels of uncertainty. To overcome this limitation, an alternative is to consider multiple scenarios simultaneously. A two-phase multi-scenario-based UDS planning approach was developed. Scenario-optimal solutions were determined for a set of scenarios in Phase I, as the traditional planning approach, while common elements across the scenarios were identified and used to consider components-wise regret cost concept for Phase II optimization, from which a compromise solution was sought. The storm water management model was dynamically linked with the harmony search algorithm for each phase optimization model. The proposed approach was demonstrated in the planning of the grid-type drainage networks of S-city. The compromise solution was compared with the scenario-optimal solutions (Phase I) with respect to cost effectiveness and system performance under scenarios that were not considered in the planning phase. View Full-Text
Keywords: urban drainage systems; multi-scenario-based planning; two-phase optimization; pipe installation and size design urban drainage systems; multi-scenario-based planning; two-phase optimization; pipe installation and size design
►▼ Show Figures 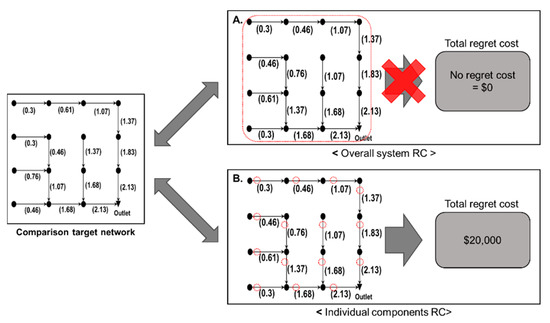