Effect of Surface Groove Structure on the Aerodynamics of Soccer Balls

Lateral movement from the principal trajectory, or “swing”, can be generated on a cricket ball when its seam, which sits proud of the surface, is angled to the flow. The boundary layer on the two hemispheres divided by the seam is governed by the Reynolds number and the surface roughness; the swing is fundamentally caused by the pressure differences associated with asymmetric flow separation. Skillful bowlers impart a small backspin to create gyroscopic inertia and stabilize the seam position in flight. Under certain flow conditions, the resultant pressure asymmetry can reverse across the hemispheres and “reverse swing” will occur. In this paper, particle image velocimetry measurements of a scaled cricket ball are presented to interrogate the flow field and the physical mechanism for reverse swing. The results show that a laminar separation bubble forms on the non-seam side (hemisphere), causing the separation angle for the boundary layer to be increased relative to that on the seam side. For the first time, it is shown that the separation bubble is present even under large rates of backspin, suggesting that this flow feature is present under match conditions. The Magnus effect on a rotating ball is also demonstrated, with the position of flow separation on the upper (retreating) side delayed due to the reduced relative speed between the surface and the freestream. View Full-Text
Keywords: flow visualization; cricket; boundary layers; Particle Image Velocimetry flow visualization; cricket; boundary layers; Particle Image Velocimetry
►▼ Show Figures 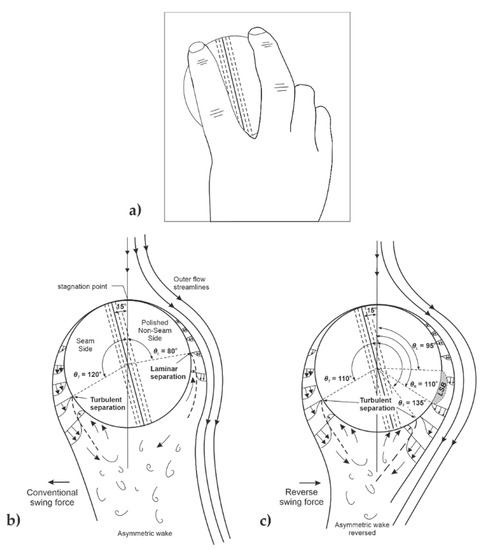