:
According to the results of a dynamic prototype test for the surface outlet radial gate on the Jinping high arch dam during the flood discharging process, a novel cause of vibration fundamentally different from the traditional causes of flow-induced radial gate vibration, is analyzed for the first time. Under the condition that the flood is discharged only from mid-level outlets, an accompanying vibration of the surface outlet gate is induced by the vibration of the closely spaced mid-level outlet gates. It is counterintuitive that the most intense vibration occurs when the surface outlet gate is closed and, on the contrary, the vibration is reduced when the gate is opened and subjected to flow excitation. In order to analyze and explain this accompanying vibration phenomenon, a theoretical model is developed based on the conventional theory of passive vibration absorbers. The difference between the proposed and conventional theoretical models is that more complex load and damping conditions are considered, and more attention was paid to the dynamic behavior of the accessory structure. Then, the cause and mechanism for the surface outlet gate vibration is clarified in detail, based on the proposed theoretical model. The comprehensive analysis and mutual verification of the prototype test, theoretical derivation and numerical simulation, indicate that the clarification and the proposed theoretical model is reasonable and accurate. The research reported in this paper will be beneficial for the design, operation and maintenance of the hydraulic gates installed on high arch dams.
Keywords:
theoretical analysis; accessory structure; hydraulic gate; structural dynamics; vibration amplification mechanism; accompanying vibration; ANSYS finite element software; MATLAB programming software

2. Prototype Test for the Vibration of the Hydraulic Gate

2.1. Basic Information for Jinping I Hydraulic Project and the Prototype Test

The Jinping I hydraulic project is one of the largest hydropower stations in China and its water-containing structure is a concrete double curvature arch dam which is the highest in the world. The arch dam is 305 m in height with a reservoir capacity of 7.76 × 109 m3 and the designed flood discharge rate of the surface and mid-level orifices on the dam body is approximately 13,600 m3/s.
In the flood season of 2014, intense vibration of the surface outlet gates occurred during the flood discharge process. Therefore, we carried out a series of vibration tests for the surface and mid-level orifice gates in almost all the cases included in the reservoir operation scheme, which is determined by the comprehensive utilization of water resources. As shown in Figure 1, the dynamic testing system applied in the prototype dynamic tests is given. The sampling frequency and temporal interval of the testing data are 400 Hz and 0.0025 s, respectively.
Moreover, the working conditions of the Jinping arch dam during the vibration tests are listed in Table 1 and the images of the prototype test are given in Figure 2. It should be pointed out that for the research presented in this paper, the influence of the downstream level, which is an essential factor in describing the working condition of a hydropower project, can be said to be negligible. According to the comprehensive analysis in this study, the variation of the downstream level in a limited range will not influence the generation process of the accompanying vibration of the surface outlet gate. Prototype test records show that the downstream levels of working conditions 4 to 8 are approximately equal to 1649.37 m. This may be because the sums of the hydro-turbine generator discharge and dam body discharge are equal under different working conditions. Of course, the test error in the prototype observation could also be the possible reason for the same downstream level in different working conditions. As the downstream level will not affect the research results, this question is not further investigated in this article. Moreover, the opening of the hydraulic gate is defined as the elevation from the gate bottom to the weir crest (for the surface outlet gate) or the short pressure pipe surface (for the mid-level outlet gate). Therefore, the hydraulic gate opening ratio shown in Table 1 is the ratio between the gate opening under specific working condition and the gate opening when the gate is opened to the maximum extent.
In order to clearly demonstrate the number and relative position of the different hydraulic gates, the arrangement of the outlets on the arch dam body is illustrated in Figure 3.

The mid-level outlet on the Jinping arch dam is equivalent to a short pressure pipe and the fluctuating pressure generated by the high-velocity discharge flow in the pressure pipe may mainly consist of high frequency components [35]. As shown in Figure 4, the test point placement on the mid-level outlet gate (No. 3#) was given and triaxial acceleration sensors were installed at each measuring point.
In Figure 5, the root mean squares (RMSs) and dominant frequencies of the acceleration histories measured at each test point on the mid-level gate (No. 3#) are illustrated. The unit gal, shown in Figure 5 and the following several other figures, is frequently used in earthquake engineering and can be expressed as 0.01 m/s2 (i.e., 1 cm/s2) in the international system of units. It is noted that for the test points on the gate leaf, the x-direction represents the lateral direction of the gate leaf, which always remains horizontal, the y-direction represents the tangential direction of the gate leaf, and the z-direction denotes the radial direction of the gate leaf. Moreover, for the test points on the supporting arms and the concrete corbels, the x-direction denotes the lateral direction which always keeps horizontal, the y-direction represents the axial direction of the supporting arm, and the z-direction represents the direction which is perpendicular to the arm. Note that the aforementioned sensor directions are defined in the local coordinate systems and the directions in the global coordinate system may change with gate opening. As mentioned above, the triaxial sensor was installed at each measuring point, which meant that the vibrations in three mutually perpendicular directions in space could be measured at each measuring point but the directions of the sensors at different measuring points may have been different. Specifically, the directions of sensors installed on the concrete corbels did not change because the concrete corbel did not rotate when the gate opening changed. For the sensors installed on the gate, the x-direction (lateral direction) always remained horizontal and did not change in the global coordinate system; the y- and z-directions were dependent on the gate opening and were inconsistent under different working conditions.
Figure 5 indicates that the vibration in the z-direction is more intense than the vibrations in the x- and y-directions, and, except in rare cases, the dominant frequencies of the acceleration histories measured at each test point are approximately 26.2 Hz. It is noted that only the 3# mid-level outlet gate is fully opened in case 1, so that the vibration is almost certainly induced by the fluctuating pressure generated from the high-velocity flow that is discharged through the 3# orifice. According to the test results, the amplitudes and dominant frequencies for the vibrations of the 2# and 4# mid-level orifice gates in case 2 are almost the same as those of the 3# mid-level orifice gate in case 1, which is probably because of the similar flow conditions. Generally, the dominant frequency of flow-induced pressure fluctuation ranges from 0 to 2 Hz and the high frequency vibration is unlikely to be caused. However, the fluctuating pressure generated by the high-velocity discharge flow may consist of high-frequency components [35], and the high-frequency vibration of the hydraulic gate occurs frequently in engineering practice [6,36]. The detailed mechanism for the flow-induced vibration of hydraulic gates needs further investigation.

2.4. Preliminary Analysis of the Causes of the Hydraulic Gate Vibration

3. Dynamic Response for an Accessory Structure Equipped on the Primary Structure

4.1. Modal Analysis Based on Numerical Simulation

4.2. Correlation Analysis of the Prototype and Numerical Vibration Modes

5. Cause and Mechanism of the Intense Vibration of the 3# Surface Outlet Gate

According to the prototype’s dynamic test results, a counterintuitive vibration of the Jinping I surface outlet gate is observed, such that the most intense vibration occurs when the surface gate is closed and, on the contrary, the vibration is reduced when the gate is opened and subjected to flow excitation. A simplified theoretical model to analyze the dynamic response of a hydraulic gate installed on a high arch dam body is established, and the cause and mechanism for the intense vibration of the 3# surface outlet gate is clarified. When the gate is closed, the arch dam is excited by the impact force generated by the flow-induced vibration of the 2# and 4# mid-level outlet gates. Then, the vibration of the arch dam is transmitted to the 3# surface outlet gate, by which the vibration is significantly amplified. Based on the vibration mode correlation analysis, it is concluded that the vibration modes with frequencies close to the external excitation frequency significantly participate in the actual vibration. Moreover, the dynamic characteristic parameters were first estimated based on the design code and numerical calculation, and then the vibration amplification effect was approximately obtained by substituting the dynamic characteristic parameters into the proposed theoretical model. The variation law for the obtained vibration amplification effect in different cases is in accordance with the results of the prototype test, which proved that the proposed clarification and theoretical model is reasonable and accurate. 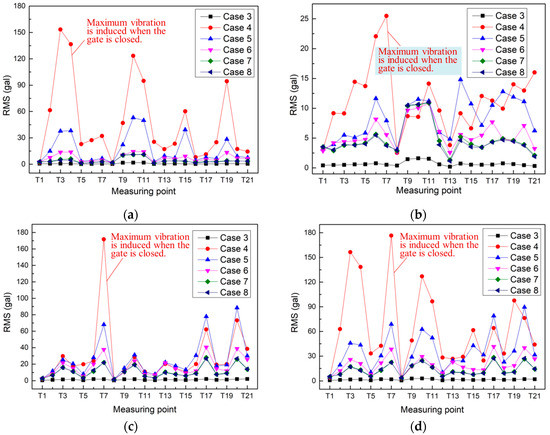 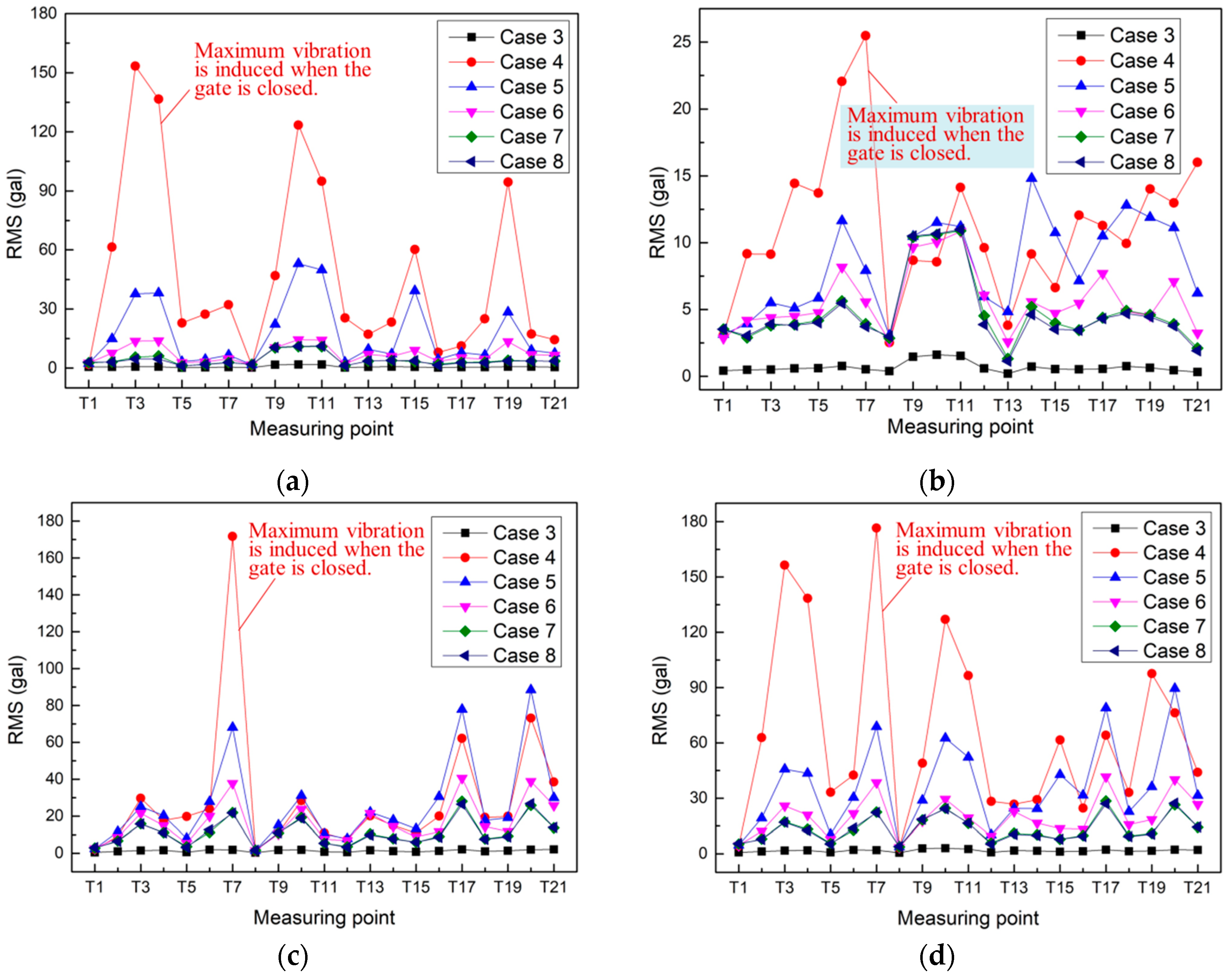 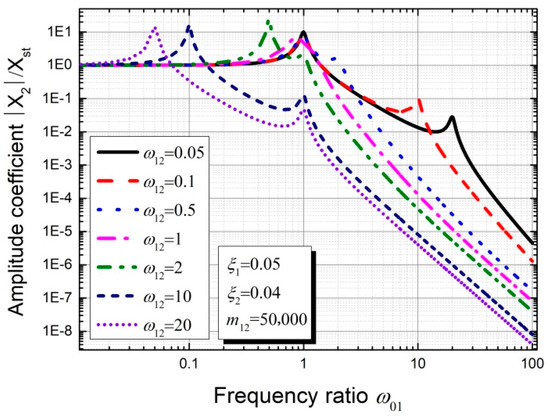 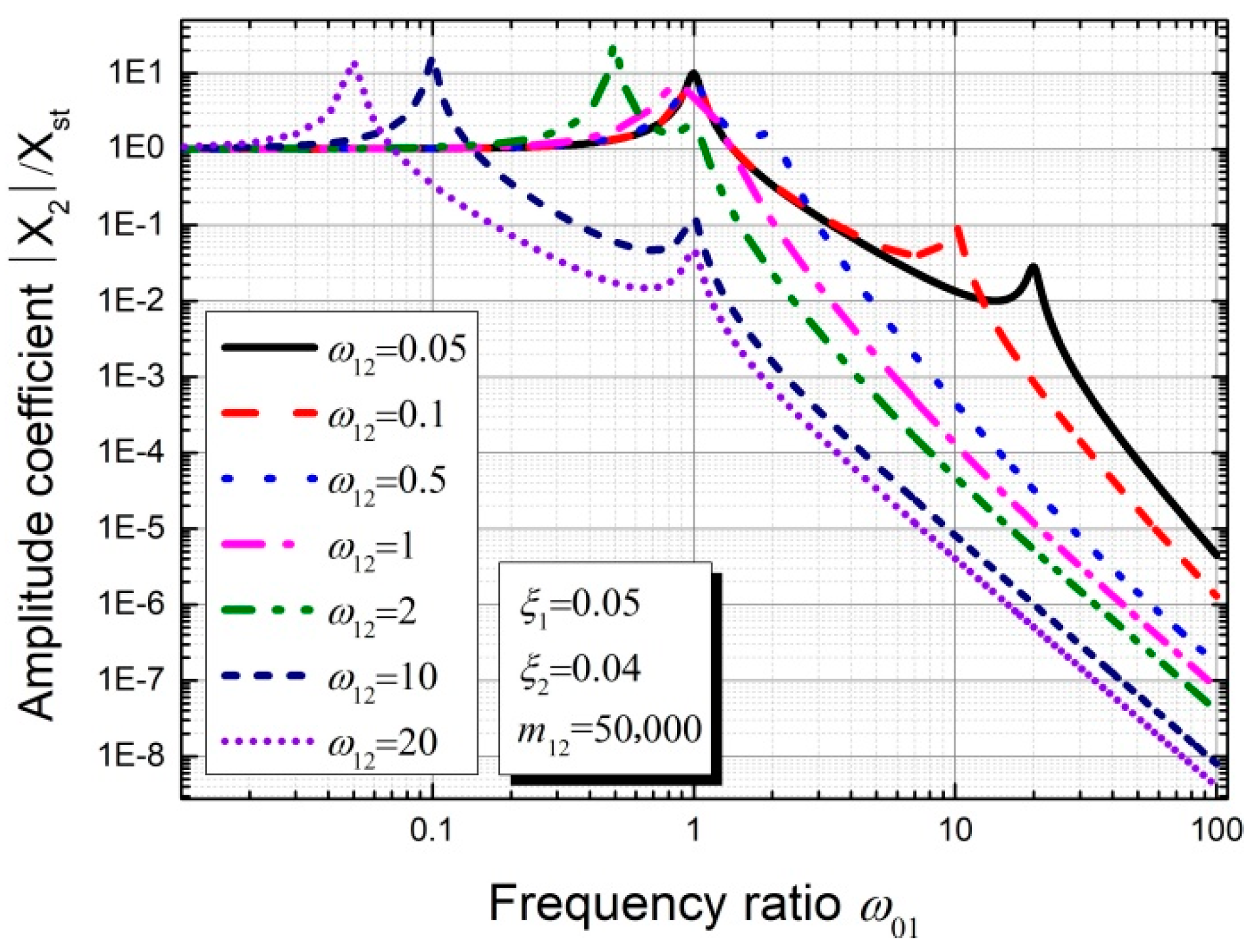 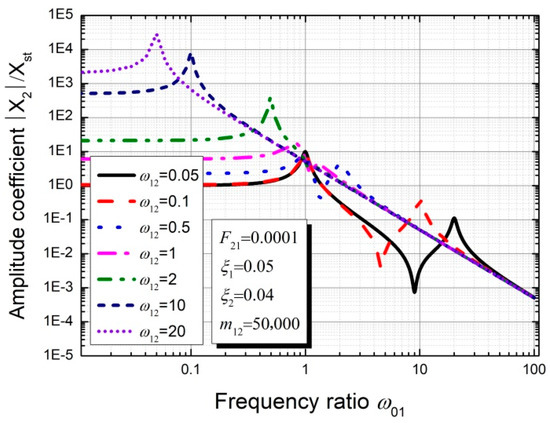 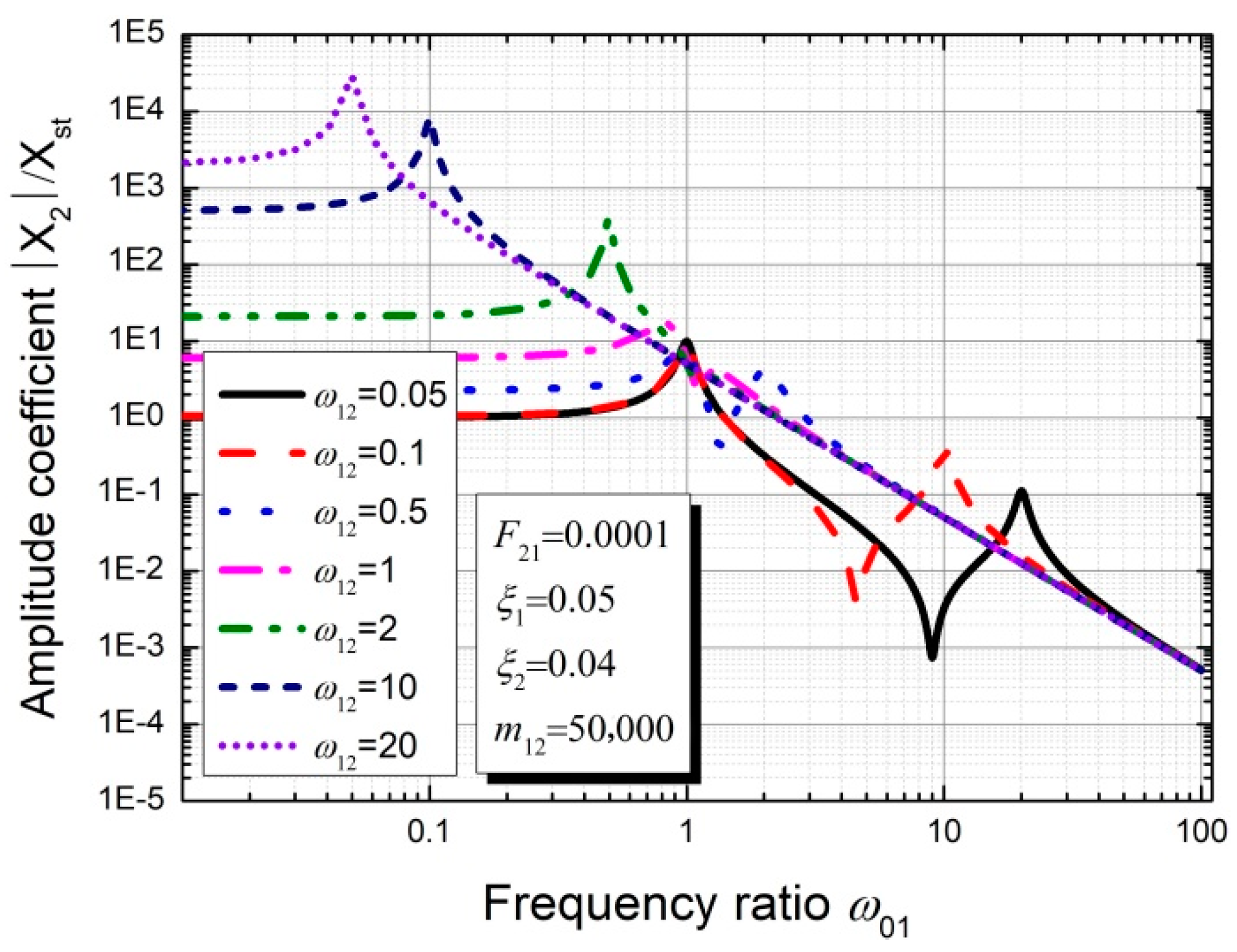 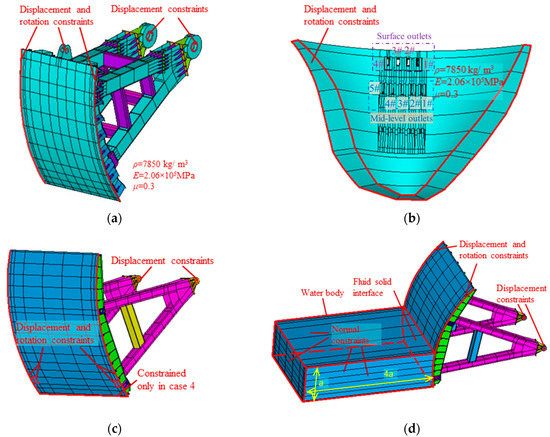 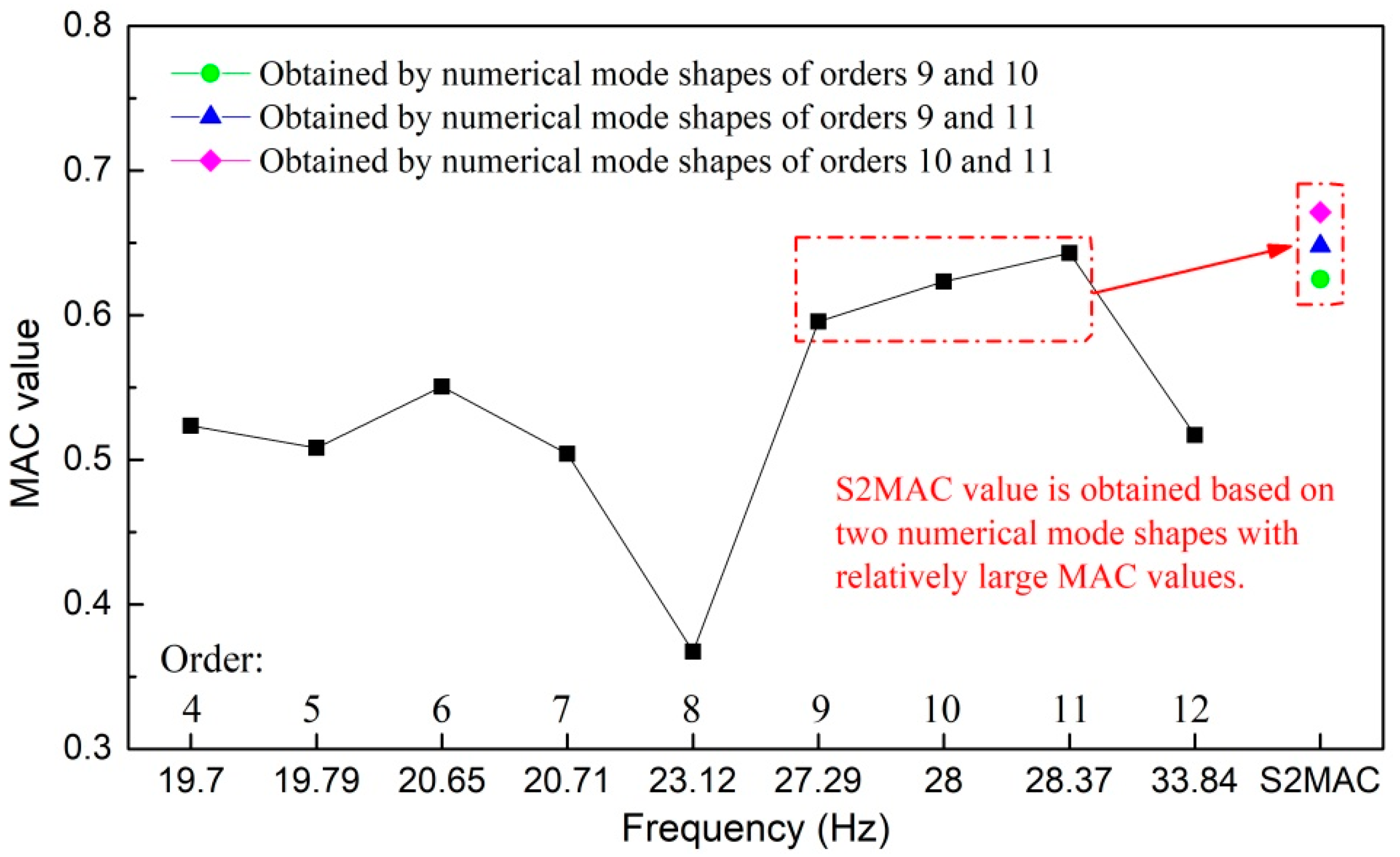