:
Reaching movements are usually initiated by visual events and controlled visually and kinesthetically. Lately, studies have focused on the possible benefit of auditory information for localization tasks, and also for movement control. This explorative study aimed to investigate if it is possible to code reaching space purely by auditory information. Therefore, the precision of reaching movements to merely acoustically coded target positions was analyzed. We studied the efficacy of acoustically effect-based and of additional acoustically performance-based instruction and feedback and the role of visual movement control. Twenty-four participants executed reaching movements to merely acoustically presented, invisible target positions in three mutually perpendicular planes in front of them. Effector-endpoint trajectories were tracked using inertial sensors. Kinematic data regarding the three spatial dimensions and the movement velocity were sonified. Thus, acoustic instruction and real-time feedback of the movement trajectories and the target position of the hand were provided. The subjects were able to align their reaching movements to the merely acoustically instructed targets. Reaching space can be coded merely acoustically, additional visual movement control does not enhance reaching performance. On the basis of these results, a remarkable benefit of kinematic movement acoustics for the neuromotor rehabilitation of everyday motor skills can be assumed.
Keywords:
reaching; motor control; sensory-motor integration; audition and movement; proprioception and movement; kinematic movement sonification; knowledge of results; knowledge of performance; visual-to-auditory substitution; neuromotor rehabilitation

Twenty-four subjects (14 females, 10 males), aged 19 to 30 years (mean age: 22.2 ± 3.0), participated in this study. All participants had a normal or corrected-to-normal vision (standard vision test), a normal hearing (hearing test: HTTS, Version 2.10, 00115.04711, SAX GmbH, Berlin, Germany) and were right-handed (Edinburgh Inventory, 10-item version). To ensure musical sense, MBEA (Montreal Battery of Evaluation of Amusia) online version [50] was conducted. Following Peretz et al. [51], subjects who scored less than 70% were excluded. The investigations were conducted in accordance with the Declaration of Helsinki. All experimental procedures were approved by the “Central Ethics Committee” ZEK-LUH at the Leibniz University Hannover, Hanover, Germany. All participants gave their informed consent for inclusion prior to their participation. After the completion of the experiment, the subjects received a modest monetary compensation.

The participants were seated on a height-adjustable chair in front of an experimental apparatus resting on a table and wore circumaural headphones (Beyer Dynamic, DT 100, 30–20.000 Hz) as well as inertial sensors.
A digitizing tablet (WACOM Intuos4 XL PTK-1240, active surface 487.7 mm × 304.8 mm) was positioned successively in the xy-plane (with the long tablet side along the y-axis), yz-plane (with the long tablet side along the z-axis), or xz-plane (with the long tablet side along the x-axis) as shown in Figure 1.
The digitizing pen was positioned next to the tablet. A chin rest, positioning the chin at a height of 30 cm from table surface, in combination with a height-adjustable chair ensured a firm and standardized head position throughout the whole experiment. An arm rest provoking approximately a 90-degree abduction in the right shoulder joint was used in the calibration process of the inertial sensors. The subjects were instructed to execute reaching actions with a digitizing pen in their right hand towards invisible, merely acoustically coded target positions on the tablet (see Figure 2).

The subjects, parallelized for sex, were randomized into two groups. While executing identical reaching tasks to invisible targets, 12 subjects were blindfolded and 12 subjects had their eyes open during the experiment. The experimental task was to hit the instructed target positions as exactly as possible. All participants received auditory instruction and feedback. There were three different conditions:

After a standardized familiarization protocol, the test session began without any further practice trials. The experimental protocol took approximately 60 min (without including the familiarization). A total of 108 trials were given, consisting of nine trials (nine different target positions on the tablet, see Table S1) multiplied by four conditions (one discrete short block, one discrete long block, and two continuous blocks) multiplied by three tablet positions (xy-plane, yz-plane, xz-plane). The stimuli were displayed in blocks of nine trials (each target position was randomly presented once in the sequence). Four blocks (one set of blocks) were repeated in all three tablet positions, in the same block order (balanced and randomized among the subjects) but with a varied trial order. The order of the tablet positions was also balanced and randomized among the subjects. Between the three sets of blocks there were breaks of 5 min. The trials were presented to the participants in a standardized setting. Each trial consisted of (1) reaching for and grasping the pen, (2) the sonification sequence (see Instruction-Audios S1–81) presented once via headphones, (3) the execution of the reaching movement towards the digitizing tablet, (4) putting the pen down, and (5) putting the arm on the arm rest. The overall duration of a single trial was about 15 s.

The two-dimensional Cartesian coordinates of the reaching point on the digitizing tablet were measured for each trial. The tablet sampled the x and y coordinates of the stylus hit with a spatial accuracy of 0.005 mm. The collected data were stored for later analyses. The reaching error was represented by the vector from the target to the reaching position. The absolute values of the single vector coordinates describe the sizes of the absolute deviations along the three directions in space (termed ‘Absolute differences’). The magnitude of the vector represents the distance between the target and the reaching position (termed ‘Absolute distance’). T-tests and analyses of variance with repeated measurements were used to compute the significance of the deviations to the target point. For the post hoc test, the Bonferroni test was used. A significance criterion of α = 5% was established for all results reported. 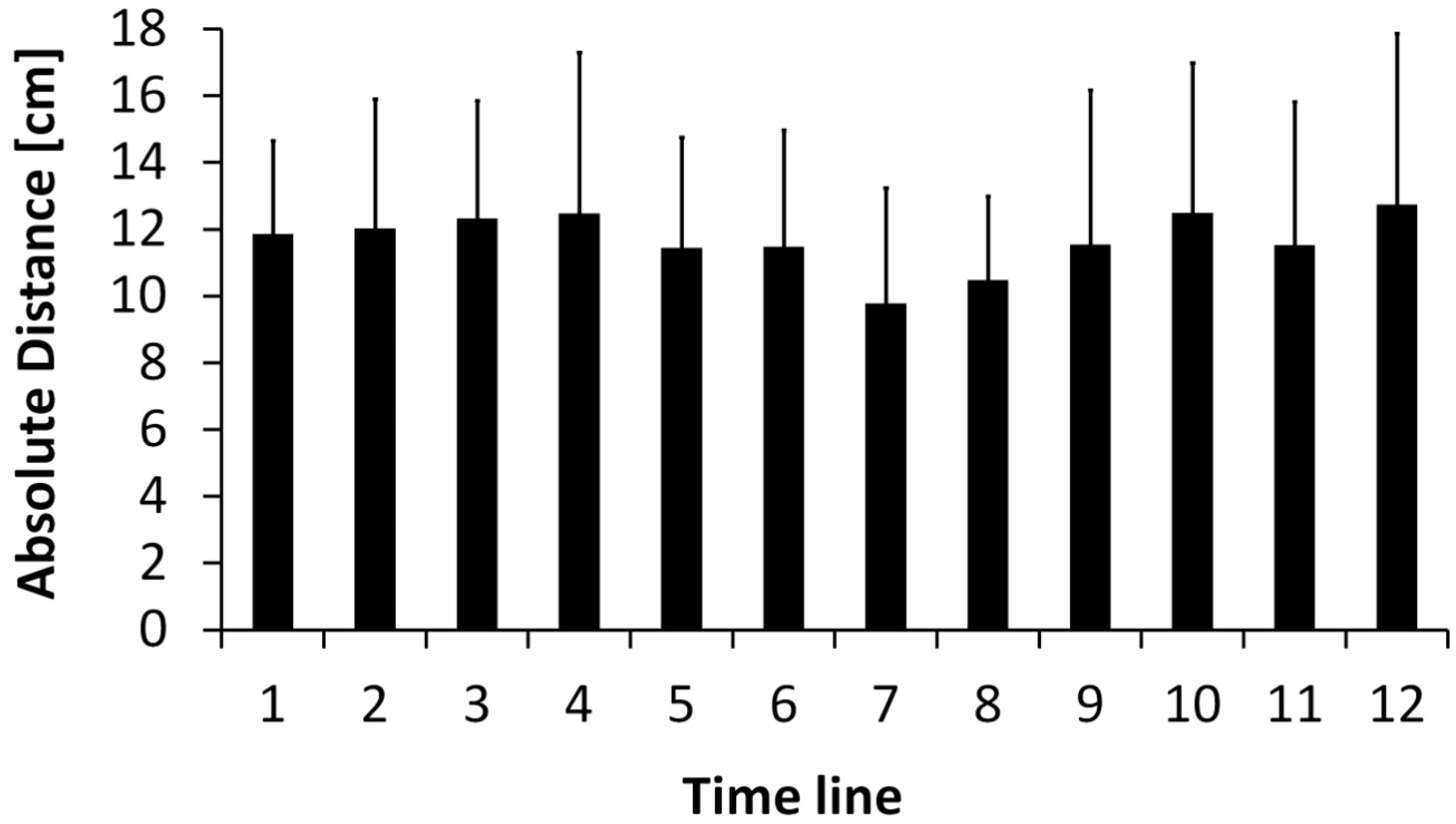 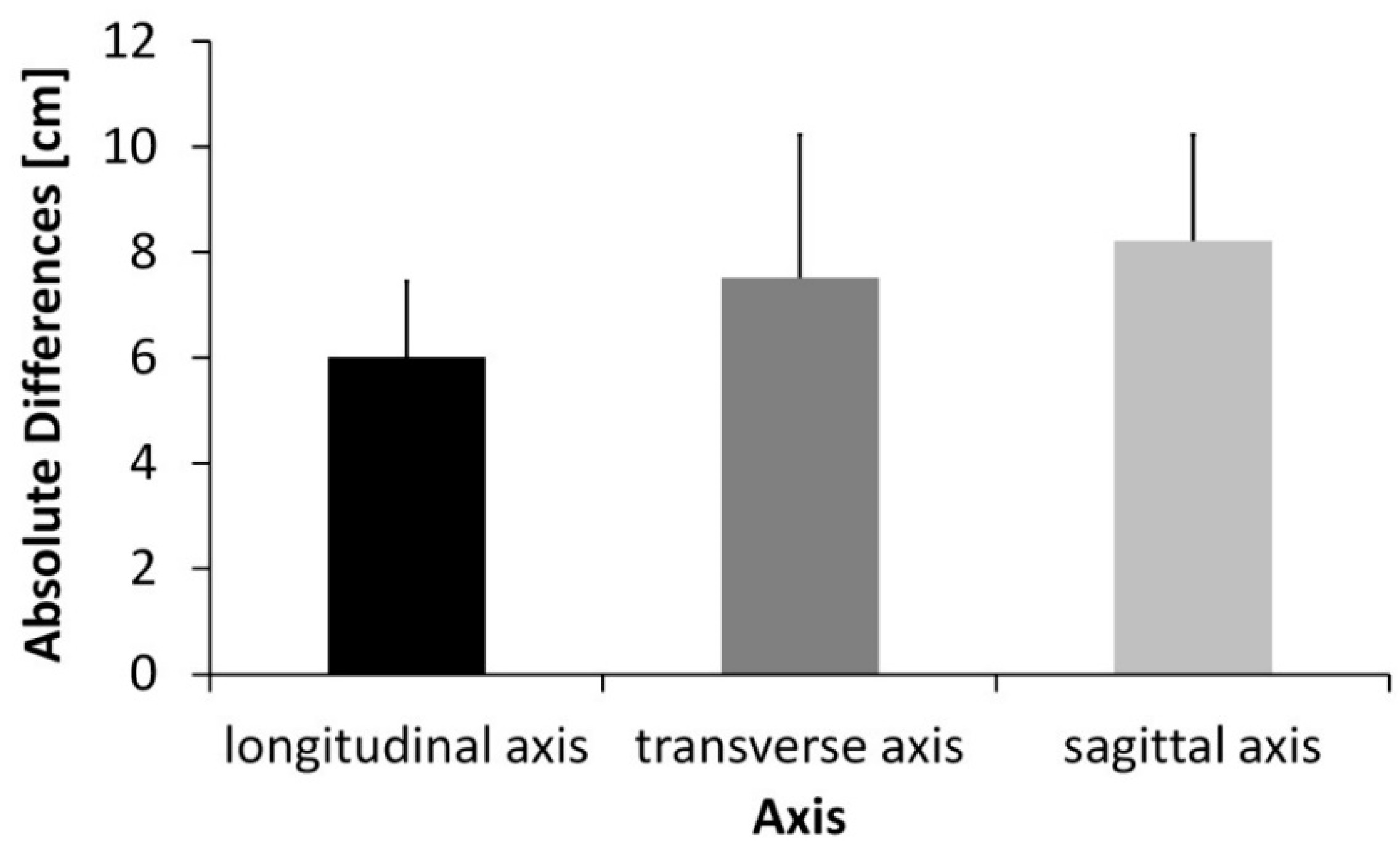 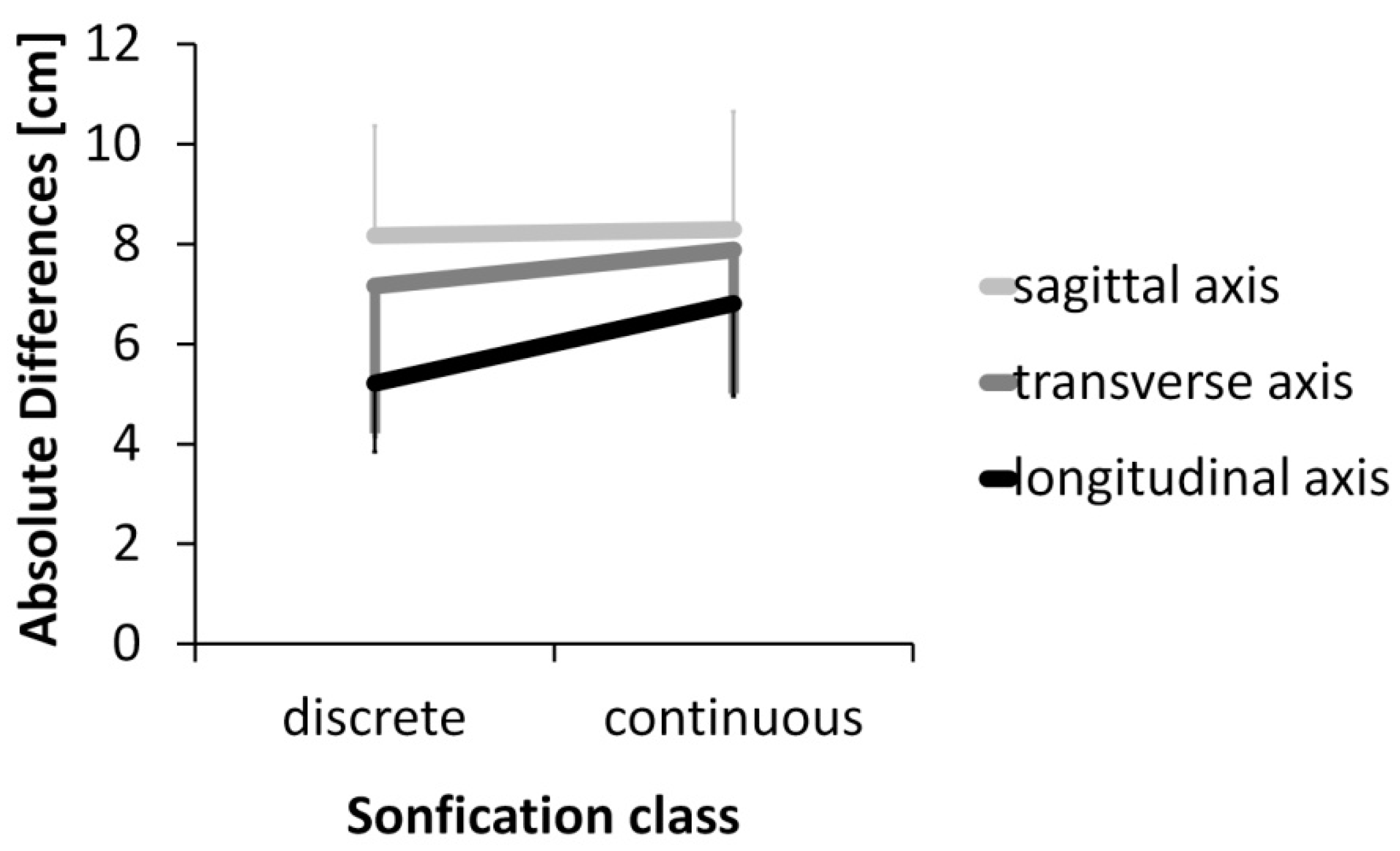