Investigation of the Influence of Liquid Motion in a Flow-based System on an Enzyme Aggregation State with an Atomic Force Microscopy Sensor: The Effect of Water Flow
Previous Article in Journal

Vibrotactile Stimulation of Nail of Hallux during Walking: Effect on Center-of-Mass Movement in Healthy Young Adults

Thirteen healthy young males (age: 23.8 ± 1.9 years, height: 1.69 ± 0.03 m, weight: 63.9 ± 7.4 kg, body mass index: 22.1 ± 2.6 kg/m2) participated in this study. None of the subjects had any history of neuromuscular diseases, trauma, or orthopedic diseases. The dominant leg was determined using the method reported by Schneiders et al. [17], and all the participants in this study were found to be right leg dominant. This study was conducted according to the Declaration of Helsinki [18], and the experimental protocol was approved by the local institutional review board. All the participants gave their written informed consent before the measurements.

Fifty-seven infrared reflective markers were placed bilaterally over bony landmarks to measure full-body motion in accordance with a previous study [19]. The vibrators were attached to the both sides of the nail of the hallux using double-sided tape because the hallux is the largest toe of the foot, and the subject could perceive a tactile sensation on the finger pad when this nail was stimulated using vibration [11,12,13]. The pressure sensors were placed under the hallux ball, and the microcontrollers were attached to the distal end of the shank using a rubber band.

Measurements were recorded in a laboratory with a straight 10-m walkway. A three-dimensional motion analysis system with 15 infrared cameras (Vicon MX and Vicon T, Vicon Motion Systems, Oxford, UK) and nine force plates (BP400600-2000PT, AMTI, Watertown, MA, USA) were used to record the kinematic and kinetic data at sampling frequencies of 200 Hz and 1000 Hz, respectively (Figure 2).
During the walking trials, all the participants were asked to walk barefoot at a comfortable speed. The participants walked with and without vibrotactile stimulation. The orders of these walking conditions were randomized. The vibration amplitude was adjusted to be as weak as possible so that it was just perceivable to each subject on the finger pad contacting the surface while walking because each individual has a different sensation of the vibration. Before the measurements, the participants walked along the walkway for a few minutes to get accustomed to the environment. Subsequently, five successful trials were conducted where each participant accurately stepped on a force plate.

The CoM position was calculated using DhaibaWorks—our self-developed motion analysis software [20]. The full-body motion was reconstructed by fitting the marker trajectories and individual body model using a link structure. The dimensions of the body model were estimated statistically using the height and weight of the participant based on a database of Japanese body dimensions [20]. The CoM data were digitally filtered using a fourth-order Butterworth low-pass filter with a cut-off frequency of 10 Hz. The CoM movement during the stance phase of the right limb was extracted based on the ground reaction force data. The amplitudes of the CoM movement in the vertical, progression, and lateral directions during the stance phase were calculated. The walking speed was calculated from the CoM movement in the progression direction of the CoM and the time taken during the stance phase.
The intrasubject mean and standard deviation (SD) values were calculated during the stance phase. Next, the coefficient of variation (CV = (SD/mean) × 100) was calculated as an index of intrasubject variability [21]. The differences between the mean and CV values of the variables obtained with and without stimulation were determined as the effect of stimulation. In addition, to examine the impact of a measurement error, we calculated the minimal detectable change (MDC). The MDC indicates the minimal amount of change that is not likely to be considered a change due to an accidental error in measurement [22,23]. First, the standard error of measurement (SEM) was calculated using the SD and intraclass correlation coefficient. Subsequently, the MDC was calculated using the relation: SEM × 1.96 × √2 [22]. Low-pass filtering and calculation of these variables were performed using MATLAB R2019a (MathWorks Inc., Natick, MA, USA).

We conducted the Shapiro−Wilk test to verify normality assumption. Subsequently, because the sample size was small, the differences between the mean and CV values of the CoM movement of the variables obtained with and without stimulation were analyzed by conducting the Wilcoxon signed rank tests, which are nonparametric tests used to analyze the matched-pair data [24]. The baseline-dependent effects of the stimulation were determined by performing the linear regression analysis, and curve regression analysis in case of non-normality. If the relationship between the baseline values and the effect of the stimulation became significant, an additional subgroup analysis was performed. Next, the subjects were divided into two groups based on the value obtained when walking without stimulation—a steady group consisting of six subjects with a small variability, and an unsteady group consisting of six subjects with a large variability, excluding the subject with the median value. Subsequently, the Wilcoxon signed rank test was conducted to examine the difference between the variables obtained with and without stimulation in each group. Values with p < 0.05 were considered to be statistically significant. All the data were analyzed using SPSS Statistics version 25 (SPSS Inc., Chicago, IL, USA).

3.1. Differences Between Variables Obtained with and Without Stimulation

In terms of the mean value, although the CoM movements in the progression and lateral directions were analyzed by performing the curve regression analysis and the linear regression analysis, the results of the curve regression analysis were not statistically significant (p = 0.898 and 0.158, respectively). Therefore, only the linear regression analysis results are presented in Table 2 and Figure 3. The effect of stimulation on the CV values of the walking speed, stance time, and CoM movement in the lateral direction depends on the CV values obtained when walking without the stimulation. The negative baseline-dependent effect of these variables indicates that the differences between the CV values decreased linearly as the values of the variable increased. Therefore, the subjects were divided into the steady and unsteady groups for each of these variables, and the subjects in these group were different depending on each variable. A comparison of the results of these groups indicates that the CV values of the walking speed and stance time increased in the steady group as a result of stimulation, as shown in Figure 4a,b, respectively. On the other hand, the CV of the CoM movement in the lateral direction decreased in the unsteady group (Figure 4c).

We would like to thank Editage (www.editage.com) for English language editing. 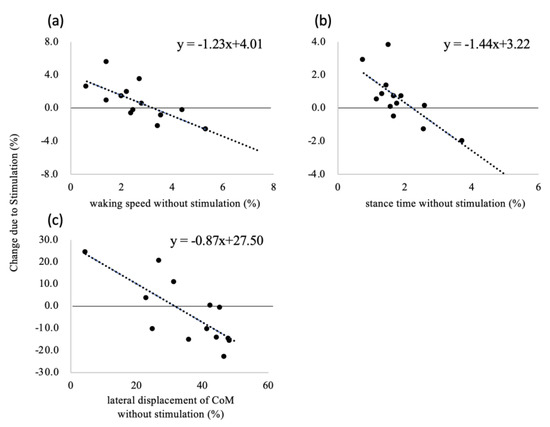 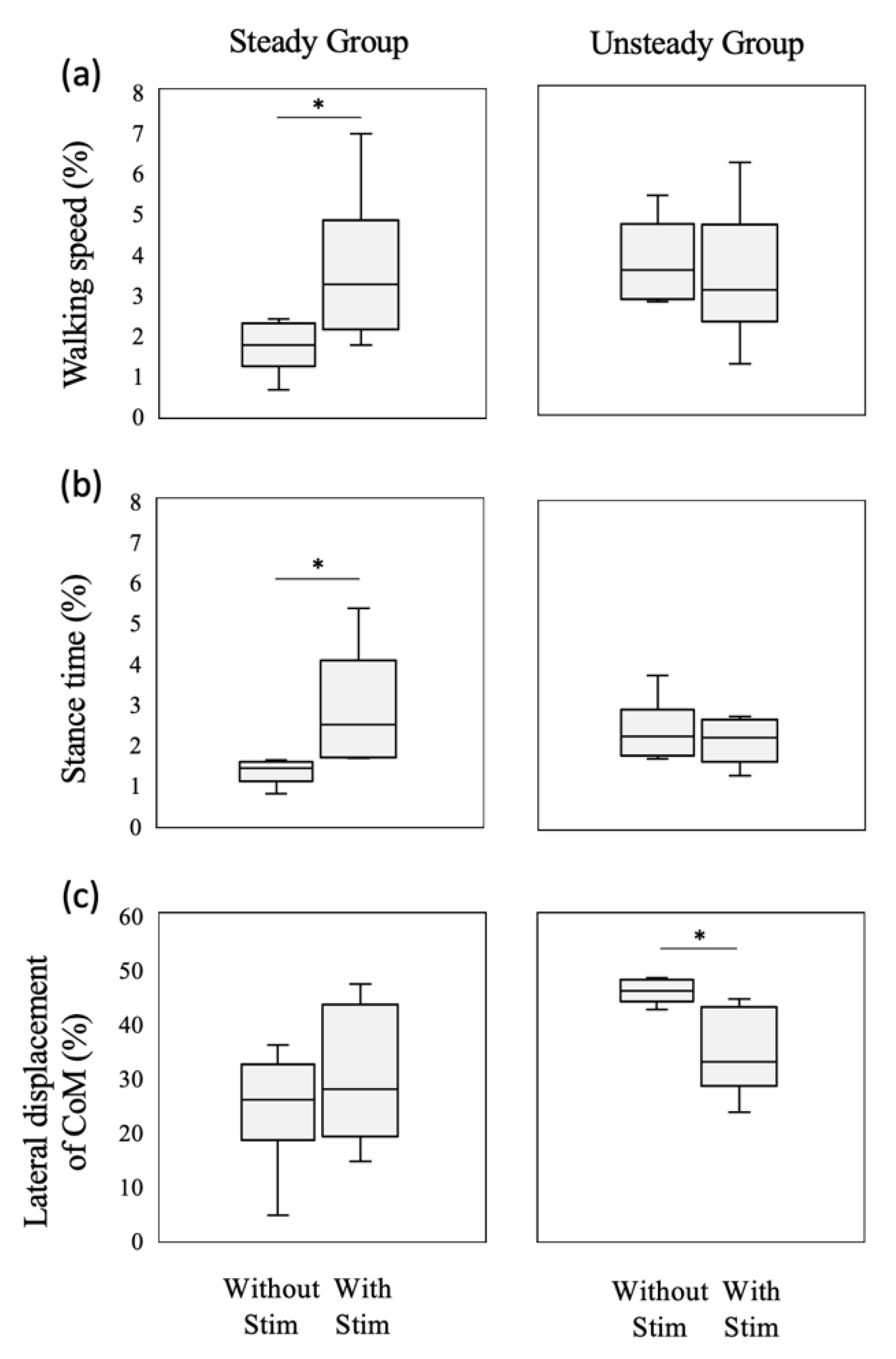