Potato peels (PP) are a major agri-food side-stream originating from potato processing, but to date, their green valorization as a bioresource of antioxidant polyphenols is limited to extraction processes involving mainly water/ethanol-based solvents, whereas other eco-friendly methodologies are scarce. This study aimed at developing a simple, straight-forward and green extraction methodology to effectively recover PP polyphenols, using hydroxypropyl β-cyclodextrin (HP-β-CD). After an initial assay to identify the optimal HP-β-CD concentration that would provide increased extraction yield, optimization based on response surface methodology enabled maximization of the extraction performance, providing a total polyphenol yield of 17.27 ± 0.93 mg chlorogenic acid equivalent g−1 dry mass, at 30 °C. Testing of temperatures higher than 30 °C and up to 80 °C did not favor higher yields. The extracts obtained with HP-β-CD were slightly richer in polyphenols than extracts prepared with conventional solvents, such as aqueous ethanol and methanol, displaying similar antioxidant characteristics. The major polyphenols that could be identified in the extracts were neochlorogenic, chlorogenic, caffeic and ferulic acids. The outcome of this study demonstrated that HP-β-CD may be used as a highly effective green means of recovering PP polyphenols, at near-ambient temperature. View Full-Text
Keywords: antioxidants; extraction; hydroxypropyl β-cyclodextrin; polyphenols; potato peels antioxidants; extraction; hydroxypropyl β-cyclodextrin; polyphenols; potato peels
►▼ Show Figures 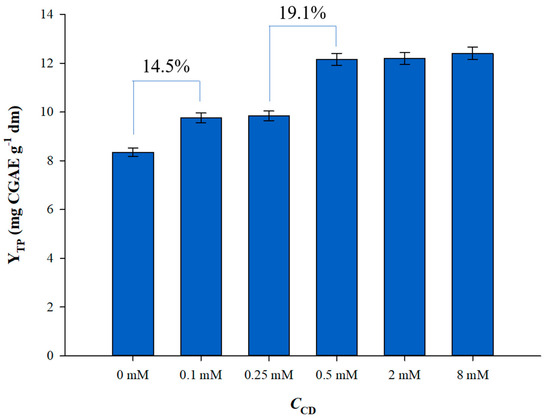