Ultraviolet Radiation Exposure: Some Observations and Considerations, Focusing on Some Italian Experiences, on Cancer Risk, and Primary Prevention

Sound has the potential to increase biogas yields and enhance wastewater degradation in anaerobic digesters. To assess this potential, two pilot-scale digestion systems were operated, with one exposed to sound at less than 10 kHz and with one acting as a control. Sounds used were sine waves, broadband noise, and orchestral compositions. Weekly biogas production from sound-treated digesters was 18,900 L, more than twice that of the control digester. The sound-treated digesters were primarily exposed to orchestral compositions, because this made cavitational events easier to identify and because harmonic and amplitude shifts in music seem to induce more cavitation. Background recordings from the sound-treated digester were louder and had more cavitational events than those of the control digester, which we ascribe to enhanced microbial growth and the resulting accelerated sludge breakdown. Acoustic cavitation, vibrational energy imparted to wastewater and sludge, and mixing due to a release of bubbles from the sludge may all act in concert to accelerate wastewater degradation and boost biogas production. View Full-Text
Keywords: acoustic cavitation; anaerobic digestion; biogas; green energy; methane; sonication acoustic cavitation; anaerobic digestion; biogas; green energy; methane; sonication
►▼ Show Figures 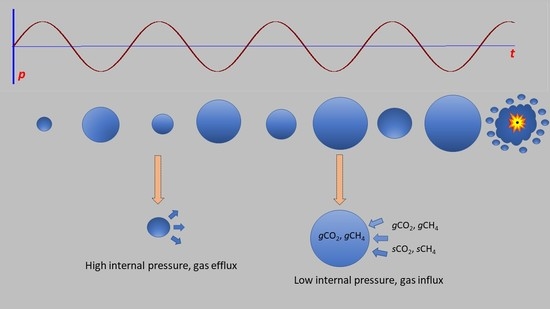