DEUFRABASE: A Simple Tool for the Evaluation of the Noise Impact of Pavements in Typical Road Geometries
Previous Article in Journal

Concentration of Organotin and Booster Biocides in Sediments of Seagrass Area from Sungai Pulai Estuary, South of Johor, Malaysia

:
Antifouling compounds are widely used in paints applied on ship hulls to prevent attachment of fouling organisms. However, a certain amount of these chemicals could leach from the painted surface, enter seawater, and pose deleterious effects on various marine biotas. The present study aimed to determine the concentration of organotin (OT) compounds and booster biocides in sediments collected from the seagrass area of Sungai Pulai estuary, Malaysia. The sediment samples were collected from three points on the seagrass bed, brought back to the laboratory, extracted using standard extraction procedure, and the analytes were analysed using gas chromatography-mass spectrometry (GC-MS) method. The results showed that tributyltin (TBT) concentrations in sediments were within the range of 8.1 ± 0.4 to 10.6 ± 0.5 µg/kg, whereas the values of triphenyltin (TPT) were between 17.1 ± 0.9 and 19.4 ± 1.0 µg/kg. The range of concentration of booster biocides, namely diuron, dichlofluanid chlorothalonil, Irgarol 1051, M1, and Sea-Nine 211, were from <0.1 to 22.9 ± 1.1, 48.7 ± 2.4 to 800 ± 40, <0.1 to 6.2 ± 0.3, <0.1 to 1.4 ± 0.1, 44 ± 2.2 to 877 ± 44, and 9.1 ± 0.5 to 170 ± 8.5 µg/kg, respectively. The concentration of organotin was much lower than the previous study conducted in southern Johor. Meanwhile, the increased concentration of booster biocides proves the use of these compounds as antifouling paints in shipping systems nowadays.
Keywords:
organotin; booster biocides; antifouling paint; shipping; seagrass; sediment

The organisms that settle and grow on the external of submerged or semi-submerged object are known as marine biofouling [1]. The initial colonisation of organisms occurs when the slime layer begins to develop in submerged areas, which gains the growth of microscopic (e.g., bacteria and algae) and calcareous (e.g., mussels and barnacles) organisms [2]. The colonisation of organisms is a serious problem in the shipping industry. The organisms on ship hulls increase friction, which reduces the ship speed and increases the fuel consumption in order to maintain the ship speed [3]. The friction of ship hull will increase about 80% with only 1 mm thick of algal slime and decrease the speed about 15% [4]. Therefore, organotin (OT) compounds are used in ship paints to maintain the effectiveness of ship functionality in the long term [5] by avoiding the attachment of marine organisms to the hulls.
Since the early 1960s, OT compounds especially tributyltin (TBT) and triphenyltin (TPT) are commonly used as the ingredient in antifouling paints. However, these compounds have the potential to leach into marinas, followed by wide spreads of toxicants resulting in high concentration level of contamination in the environment. OT compounds are poorly biodegradable and have the potential to remain long in the aquatic environment, which can cause deleterious effects towards marine organisms. The effects of TBT in marine environment include acute toxicity [6,7,8,9,10], bioaccumulation in the organism [11,12,13,14,15,16,17], imposex [18,19,20,21] followed by a decrease in reproductive viability of marine organisms. In October 2001, the International Maritime Organization adopted the International Convention on the control of Harmful Anti-fouling System (AFS Convention) that banned the use of OT compounds as a substance in ship antifouling paints starting from 2003. However, OT compounds are still used in several areas, especially in the developing countries, including Malaysia [22].
Since the ban of OT compounds, a number of OT-free antifouling paints have been manufactured. Booster biocides are highly degradable and require less time to remain in the aquatic environment [23]. Commercial OT-free antifouling paints that are widely used nowadays include chlorothalonil, dichlofluanid, diuron, Irgarol 1051, Sea-Nine 211, TCMS pyridine, TCMTB, zinc pyrithione, and zineb [24]. However, these compounds also cause problems in the marine ecosystem. At a very low concentration, the photosynthesis of plants can be affected in the value of parts per trillion (ng/L). Irgarol 1051 and Diuron act as herbicides that inhibit photosynthesis by blocking the electron transfer in photosystem II [25]. This situation interrupts the photosynthetic electron transport chain in photosynthesis and thus reducing the ability of the plant to convert light energy into chemical energy (ATP and reluctant potential). Moreover, the accumulation of booster biocides in aquatic life can reduce the germination and growth of non-target organisms such as algae, Hormosira banksii [26], and the seagrass, Zostera marina [27]. If the situation continues in the long term, there is a potential for disturbance of food-web cycle when the producers are under threat. Another major concern about booster biocides is the accumulation of compounds from the lower trophic level that is then transferred to the higher trophic level, which involves organisms as the important sources of food for human [28]. High concentration of booster biocides detected in marine food is risky for human health. In Malaysia, there is a lack of data on the concentration of OT and booster biocides in sediment for further reference. Due to this fact, the study was conducted to investigate the degree of concentration of OT and booster biocides in the sediments collected from the seagrass area of Sungai Pulai estuary in southern Johor, Malaysia. The present paper reports the recent contamination and distribution of butyltins (BTs) and penyltins (PTs) compound in marine environment including their breakdown products.

The study was carried out in the seagrass area of Sungai Pulai estuary, located in southern Johor, (latitude N 01°20.137′, E 103°35.158′) as illustrated in Figure A1. The seagrass area varies in size from 120 to 1000 m in length and 50 to 120 m in width [29]. Seagrass roots and rhizomes stabilize the sediment on the seagrass bed, which reduces soil erosion. This unique area becomes a protective shelter for diverse species of marine organisms from all trophic levels [30]. However, human development activities, mainly shipping activities near the study area, release more OT and booster biocides into the environment, including sediments. Other human activities around the study site include land reclamation for port facilities and palm oil plantation, which have the possibility to release herbicides into the coastal area.

Surface sediment samples were collected in triplicate by using a scoop at three different points on the seagrass bed. All the sediments collected were stored in clean polyethylene bags, kept in a cooler box with ice, transported to the laboratory and immediately kept in a deep freezer at −20 °C prior to the next analytical procedures.

Target compounds were extracted from sediment samples according to the method described by Harino et al. [31] with some modification. About 1 g of sediment in a centrifuge tube was homogenized with 10 mL of hydrochloric acid (HCl)-methanol/ethyl acetate (1:1) (analytical reagent, Kanto Chemical Co. Inc., Japan) and 100 µL of surrogate standard solution monobutyltin-d9 (MBT-d9), tributyltin-d27 (TBT-d27), diphenyltin-10 (DPT-d10), dibutyltyin-d18 (DBT-d18), monophenyltin-d5 (MPT-d5), and triphenyltin-d15 (TPT-d15). The mixture was shaken for 10 min. After shaking, the residue was again extracted with 10 mL of hydrochloric acid (HCl)-methanol/ethyl acetate (1:1). The combined supernatant was transferred into a separatory funnel containing 30 mL of 30% sodium chloride (NaCl) (assay ≥ 99.5%, Wako, Japan) aquatic solution. The analyte was extracted twice with 10 mL of ethyl acetate:hexane (3:2) (analytical reagent, Kanto Chemical Co. Inc., Japan) for 10 min. The combined organic layer was mixed into 50 mL of hexane (analytical reagent (96%)), Kanto Chemical Co. Inc., Japan) and left to stand for 30 min. Aqueous layer was removed and the organic layer was dried by adding anhydrous sodium sulphate (Na2SO4) (Kanto Chemical Co. Inc., Japan). The collected analyte was concentrated to 2 mL. The concentrated analyte was diluted with 3 mL of ethanol (analytical reagent (assay ≥ 99.5%), Wako, Japan), transferred to a separatory funnel, and added with 1 mL of acetic acid-sodium acetate buffer solution (pH 5) (Wako, Japan), and 10 mL of distilled water, and subsequently ethylated by shaking with 1 mL of 2% sodium tetraethyl borate (Wako, Japan) for 30 min. The solution was saponificated with 10 mL of 1 M of potassium hydroxide (KOH)-ethanol solution (Wako, Japan) by shaking for another 1 h. Then, the solution was extracted twice with 50 mL of distilled water, 10 mL of hexane, and shaken for 10 min. Water layer was removed and the combined organic layer was dried with anhydrous Na2SO4. After being concentrated to 1 mL, the analyte was cleaned with Florisil SEP-PAK, followed by elution with 10 mL diethyl ether and hexane. The final solution was concentrated up to 1 mL with N2 before 100 µL of internal standard was injected (TeBT-d36, TePT-d20, 1 mg/L in hexane).

The sediment samples for determination of booster biocides were extracted through liquid-liquid extraction as referred from the method by Harino et al. [31]. In a centrifuge tube, 1 g of sediment was added twice with 10 mL of acetone (analytical reagent (assay ≥ 37%), Sigma-Aldrich, USA) and shaken for 10 min, followed by centrifugation for another 10 min. The combined supernatant was added with 50 mL of distilled water, 0.5 g of celite (Wako, Japan), and 1 g of zinc acetate dehydrate (Wako, Japan), and allowed to stand for 30 min. The analyte was filtered with Whatman filter paper into a separatory funnel, added with 10 mL of dichloromethane (analytical reagent (99.5%)), Kanto Chemical Co. Inc., Japan) twice, and shaken for 10 min. The combined analyte was dried with anhydrous Na2SO4 (Kanto Chemical Co. Inc., Japan). The solution was added with 20 mL of hexane and evaporated to 2 mL. The analyte was injected with 100 µL of internal standard (atrazine-d5) and adjusted to 1 mL with N2.

3.1. Concentration of Organotin Compounds in Sediments

3.2. Distribution of Booster Biocides in Sediments

This research was funded by the Fundamental Research Grant Scheme (FRGS) (Reference No.: FRGS/1/2014/STWN01/UPM/02/4) from the Ministry of Higher Education, Malaysia and was performed in relation to the JSPS Core-to-Core Program, B. Asia-Africa Science Platforms.

We are grateful to the members of the Faculty of Science, Universiti Putra Malaysia, in particular to Abdullah Talib and Azizul Aziz for their involvement in sampling and laboratory activities. 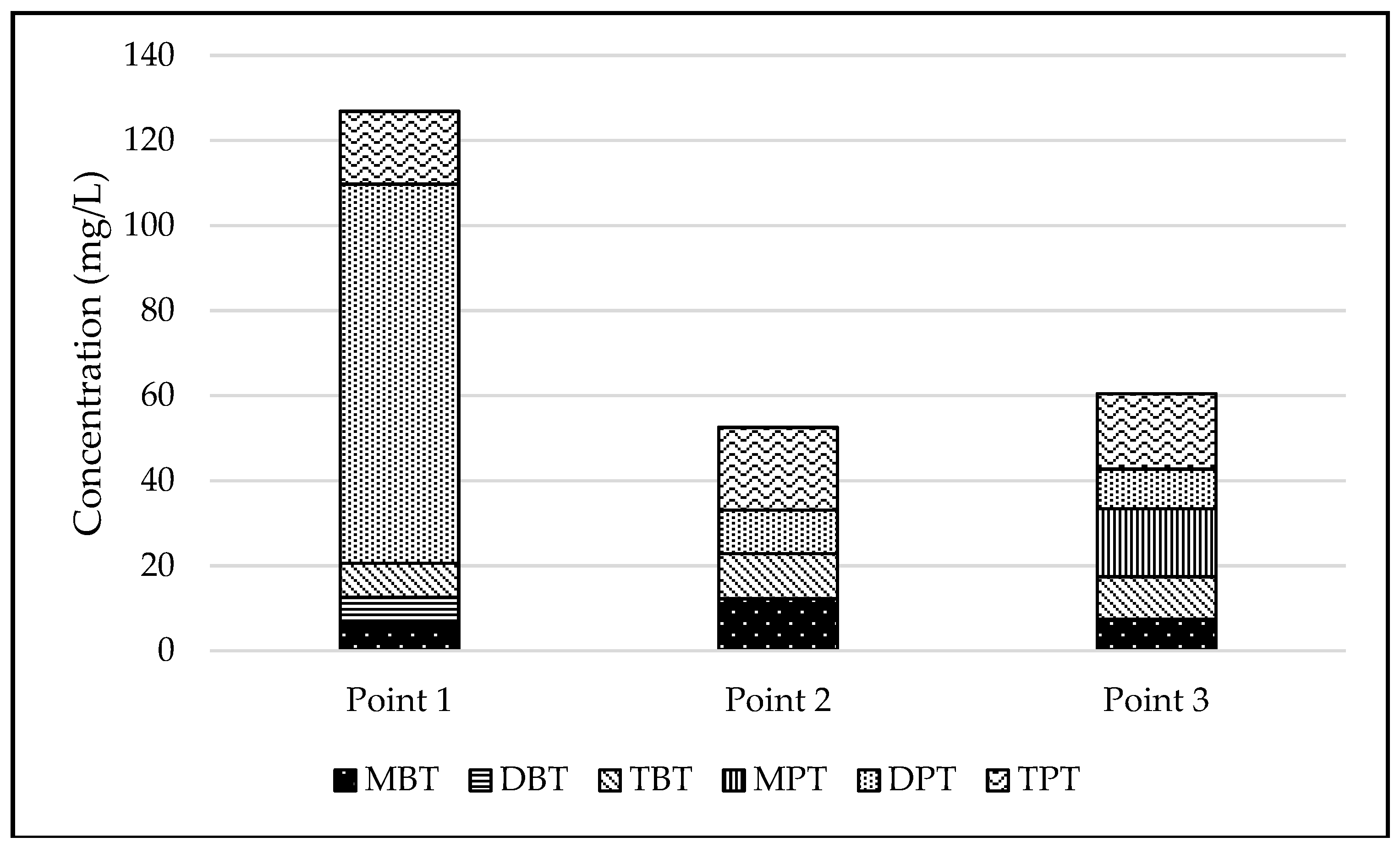 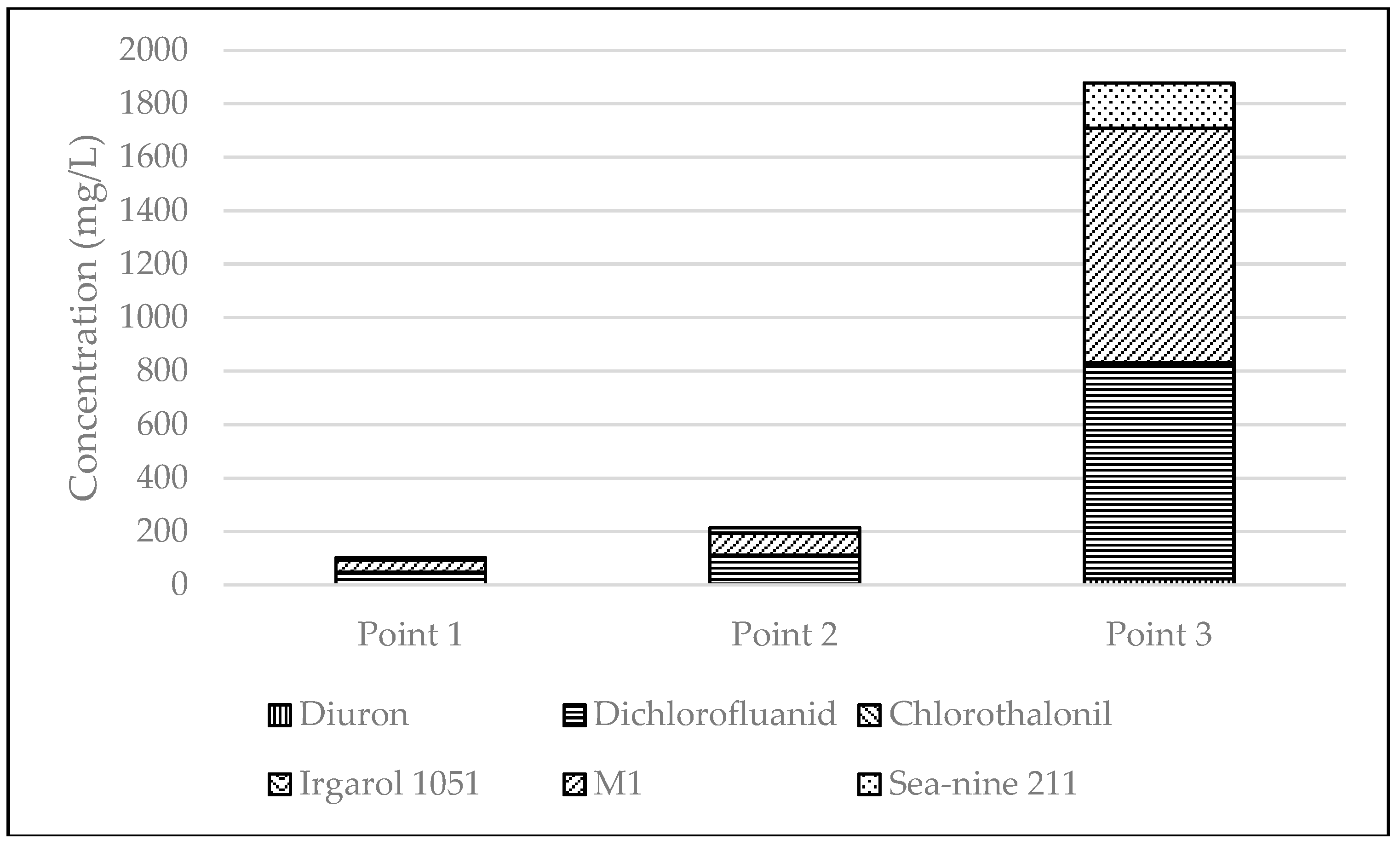