Determination of Water Quality Degradation Due to Industrial and Household Wastewater in the Galing River in Kuantan, Malaysia Using Ion Chromatograph and Water Quality Data

Phytoextraction is a low-cost technology with negligible environmental impacts. A major issue at the field scale is the heterogeneity of contaminant concentration since the entire site needs to be treated evenly even though zones may need different incisiveness in the treatment. The concentration ratio (Cshoot/Csoil) is generally used to evaluate plant species performance and it includes for simplicity an assumption of linearity in the uptake behavior, although deviation from linearity has been observed in several studies. This work describes a phytoextraction feasibility test, conducted at a greenhouse scale for the remediation of an arsenic-contaminated site. Since a feasibility test should also provide an uptake model that accounts for plant growth in heterogeneous areas, the investigation focused on defining the uptake behavior of the various selected species growing in a site with homogeneous soil properties, but with considerable differences in arsenic concentration. Among the many models selectable to describe the soil-to-plant transfer, the Freundlich-like approach was tested. While remaining easy to handle, the non-linear model selected proves to be adequate to predict the arsenic uptake despite the complex contamination considered, thus allowing a more realistic prediction of the potential of a field-scale phytoremediation procedure. View Full-Text
Keywords: arsenic; assisted phytoextraction; bioavailability; contaminated soil; Freundlich-like model; modeling uptake; phytoremediation arsenic; assisted phytoextraction; bioavailability; contaminated soil; Freundlich-like model; modeling uptake; phytoremediation
►▼ Show Figures 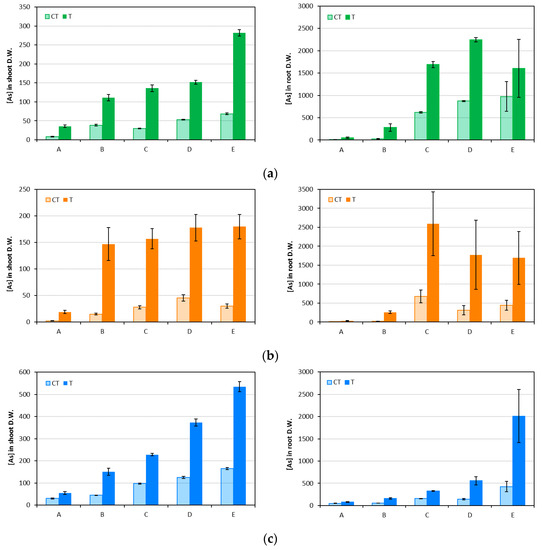